From the NFL to the pulpit: Retired Charger Miles McPherson now runs a megachurch in San Diego

A look at the intersection of sports, faith and religion.

Pastor Miles McPherson approached the home of Junior Seau, his good friend of 20 years, on May 2, 2012. He was met outside by a reporter who grabbed him, hugged him and said three words.

For McPherson, that short sentence was a message of love and necessity.

Earlier that day, Seau, a 10-time All-Pro linebacker, had been found dead in his home from a self-inflicted gunshot to the chest. He was 43.

Seau’s family asked McPherson to serve as master of ceremonies at a memorial event at Qualcomm Stadium, the former home of the San Diego Chargers. (After Seau’s death, his family discovered he had been suffering from chronic traumatic encephalopathy, a deterioration of the brain associated with frequent concussions. They settled a wrongful death lawsuit against the NFL earlier this month.)

McPherson, now 58, started his NFL career in 1982 when he was drafted by the Los Angeles Rams as a defensive back. He was cut and picked up by the Chargers. Two years later, he became serious about his faith. McPherson was in the middle of a weekend-long drug binge. Tired of using, he called on Jesus for help.

“I played in the NFL from 1982 to 1985, and my first two years I was using cocaine. After my second year, I accepted Christ as my savior in 1984, stopped doing cocaine that day, and then I played two more years,” McPherson said.

After high school, the Brooklyn, New York, native attended the University of New Haven in Connecticut, where he became the first football player to achieve All-American honors. His sports talents are embedded. Coming from a family sports-oriented household, his brother, Don McPherson, was a Heisman Trophy runner-up in 1987 at Syracuse University. He was drafted in 1988 by the Philadelphia Eagles and went on to play for the Houston Oilers before spending time in the CFL. Don McPherson was inducted into the College Football Hall of Fame in 2008.

After being released by the Chargers, Miles McPherson retired from football to follow Christ. He earned a master of divinity degree in 1991 from a private evangelical Christian school, Azusa Pacific University’s School of Theology. McPherson later worked as a youth pastor for the nondenominational Horizon Christian Fellowship in San Diego. In 2000, he “felt called by God” to start the nondenominational Rock Church in San Diego.

Now claiming a membership of more than 20,000, he offers 21 services across five campuses. He usually preaches three times every Sunday.

He believes that religion and sports intersect more than anyone realizes.

Many of his members are athletes, and at times he has given them spiritual advice.

“Football players are humans just like everybody else,” McPherson said. “I would give them the same advice I give everybody else, that you need Christ in your life. So if you’re asking Christ into your heart to be your savior, you establish a relationship with him, and in the context of that relationship, you’re going to be most fulfilled. It’s not going to be money or people patting you on the back.”

McPherson recently wrote his fifth book, The Third Option: Hope for a Racially Divided Nation, a guide to help heal pain from racism and tackle racist thoughts. The third option of the title is honor. 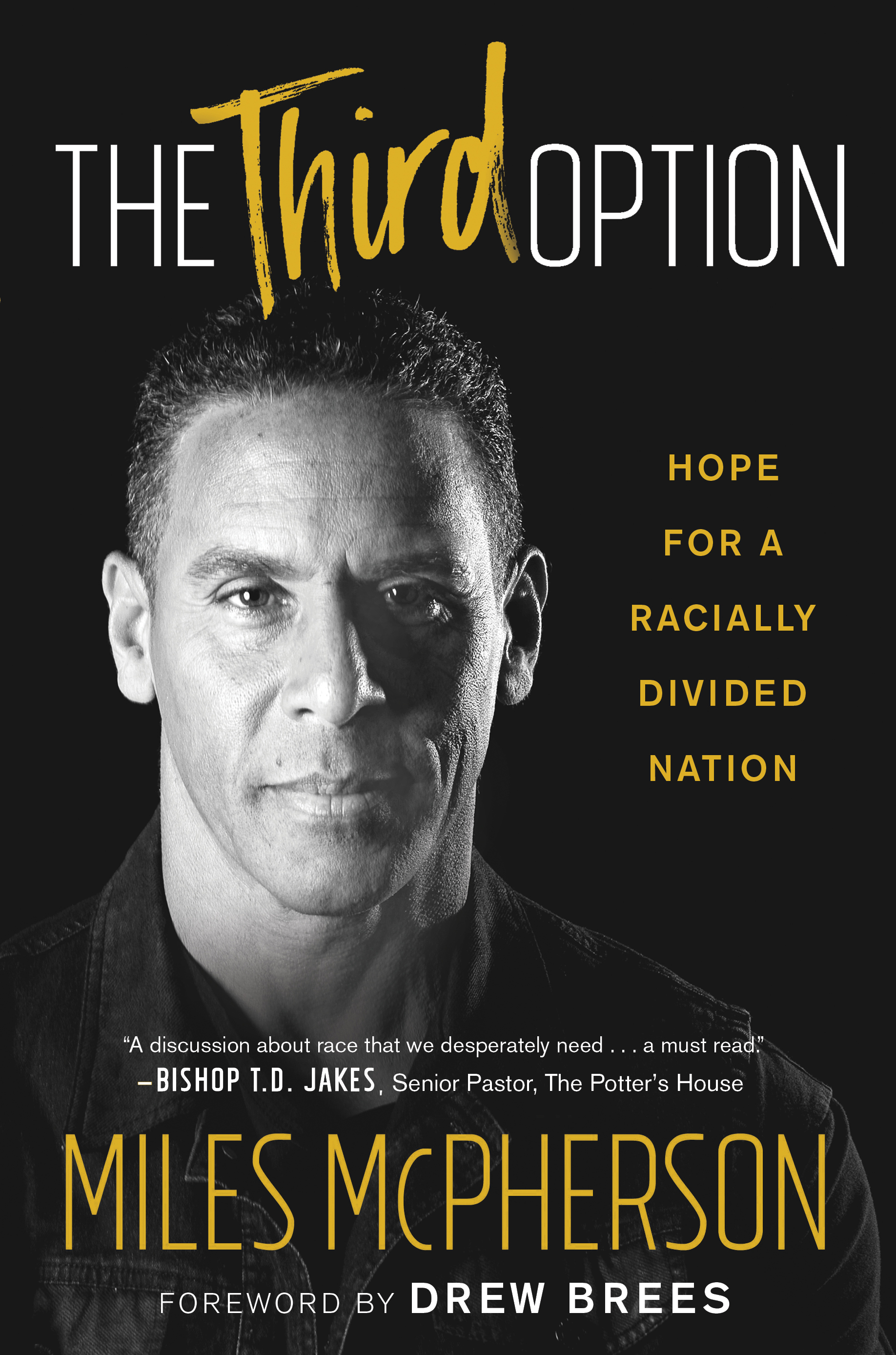 “It’s all about how we can honor one another in every race conversation,” McPherson said.

McPherson’s exposure to racism began as a child. Growing up multiracial, he dealt with issues in black and white neighborhoods.

“I grew up in a black neighborhood [on Long Island] and went to elementary and middle school in a white neighborhood. Because I’m light-skinned, I dealt with racism in the white neighborhood because I wasn’t white and I had racism in the black neighborhood because I wasn’t black enough for some people,” McPherson said. “However, on my football teams and in my church now, I’ve seen people get along and knew that people can get along, that we were made to get along. When I decided to write a book, I wanted to just write something that would really help our culture better establish relationships.

“The hardest part was writing it in a way that it would impact white, black, Hispanic, everybody, every group, because everybody sees and comes at racism from a different perspective and has different meanings and perceptions about race and racism. So I wanted to be able to speak to everybody, and feel like it was ministering to everybody, while at the same time being true to the issues.”