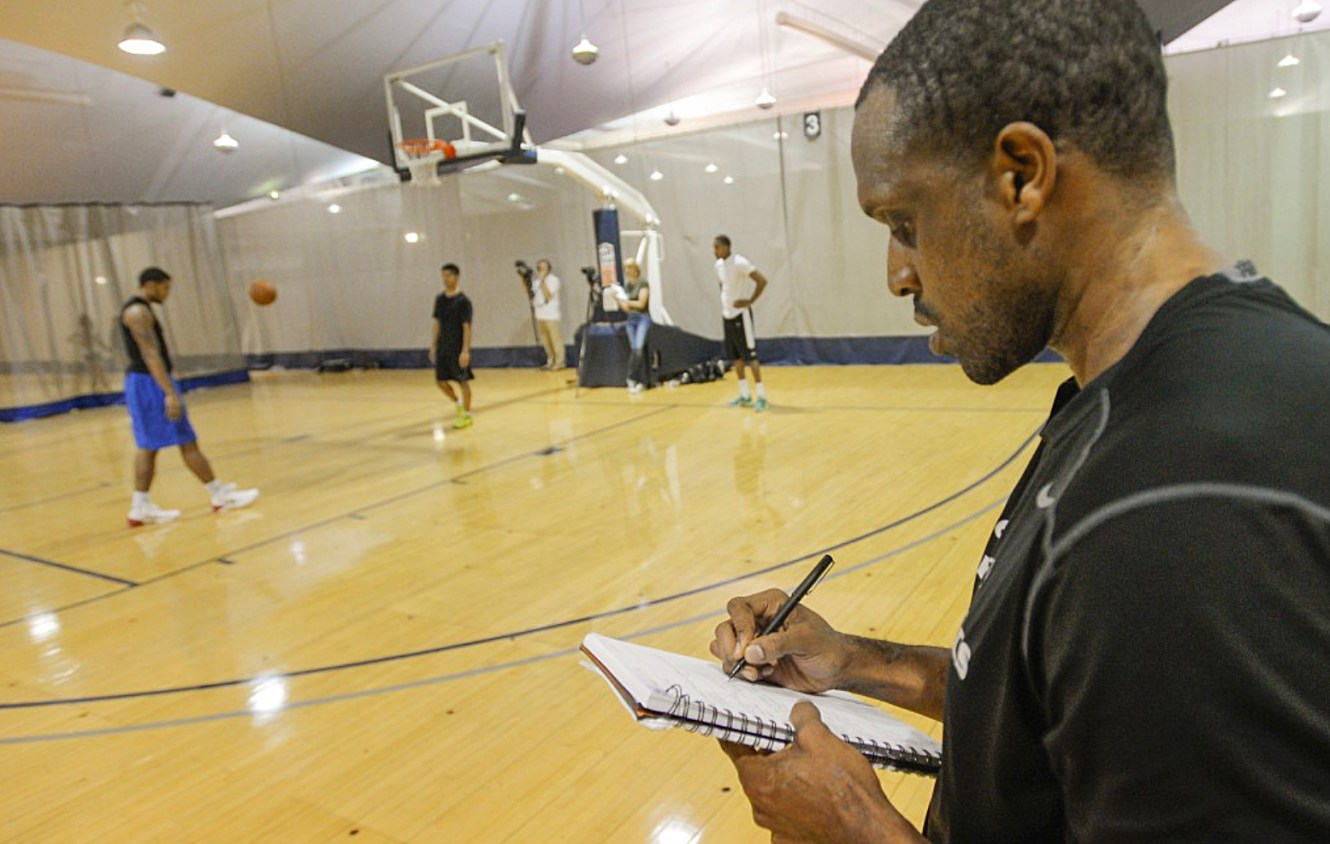 Justin Zormelo takes notes during the session with Glen Rice Jr. Former NBA Player that played for Washington Wizards. We met while he was playing pickup in Miami at a local gym. Was kicked out of college for a year. Started training together for a summer, he made NBA LEAGUE team and then later the next he won the NBA SUMMER LEAGUE MVP became the highest draft pick chosen out of the Dleague into the NBA. Courtesy of Justin Zormelo
Commentary

Get on board the ‘A’ train

Use of analytics enhances enjoyment of the game

On the surface, it appears that Michael Wilbon is casting the appeal and use of analytics in basketball in a racial light because of the lack of involvement or discussion of analytics by black fans. In his view, analytics seems detached from, or does not convey the emotions that characterize the game and discussions of it by African-Americans. Knowing Wilbon’s ideals and how well he has represented them, I believe he is actually lamenting the inevitability of analytics. The fact is that some of us at the forefront of using analytics are, in fact, black.

Any athlete will tell you they are at their best when they aren’t thinking, when they are in rhythm or in a flow. This flow is an athlete’s center. The objective of my craft is to help players use analytics as a tool to better understand, evaluate and enhance their game and knowledge. With this knowledge, there is more diversity, efficiency, confidence and fluidity to their game.

The analytics train is here. Either get on board the A-train or get left behind. First and foremost, analytics should be viewed as a tool. It’s a part of the game that has been around for a long time. Coaches, general managers, and players have been looking at their own forms of “analytics” since the game started.

Nowadays, people make their own distinctions of analytics and even couch analytics as “advanced,” when the real issue is unfamiliarity with, or a misunderstanding of a certain stat, number, or a breakdown of numbers. When certain stats become second nature, we use them or discuss them without even realizing it. This removes the mystery and unwarranted complexity that shrouds “advanced” analytics. We see analysts cite stats to support their arguments, but fail to recognize they’ve just employed analytics to make their point.

Next time you’re watching NBA Countdown on ESPN or Shaquille O’Neal, Charles Barkley and Kenny Smith on Inside the NBA, pay attention to how many times they mention numbers or reference statistics. When watching the NBA Finals, watch how many times numbers and statistics are flashed on the screen.

The irony is that statistics from analytics are derived from a game that is based on numbers. How do we know who wins a basketball game? A soccer match, a baseball game? Technological advances and video have made it possible to track and see a game in ways we did not before. We should continue to create the space for players where they can discuss and implement the analytical part of the sport while growing their game in the most natural and fluid way.

I’ve been fortunate enough to help teach and learn from some of the greatest players to ever play basketball. Take for instance Oklahoma City Thunder forward Kevin Durant, who trusted me with his game. Analytics played a great role in our evaluating and diversifying his game and setting goals.

After reviewing his numbers, he wanted to get better at going right and scoring on the right side of the floor. His numbers were amazing going left. Adding this to his offensive arsenal was going to make opponents now try to stop him from going right. So now opponents don’t know which way he will go.

Over that five-year span, Durant has been in the top three in the NBA in efficiency and points per possession. Don’t think that others aren’t noticing what Durant has done? J.J. Reddick of the Los Angeles Clippers, Kawhi Leonard of the San Antonio Spurs and Kyle Korver of the Atlanta Hawks almost achieved this feat. Golden State Warrior Steph Curry accomplished it this year. Even Cleveland Cavalier LeBron James almost accomplished it in 2012-2013 when he went 50 percent, 40 percent and 75 percent.

Look at John Wall of the Washington Wizards, he’s growing every year as a great point guard. This guy is so smart he could tell you what everyone on the court is going to do. He knows his numbers and uses them as a tool to better himself. Serge Ibaka of the Thunder has been one of the best midrange jump shooters in the entire NBA. Now he takes it to the 3-point line and has expanded his game. Should he know some of his numbers and where he is effective? Or what to work on? I can bet you anything that James, Chris Paul of the Los Angeles Clippers, and Curry can tell you their numbers and the numbers of everyone on the floor.

Wilbon pointed out that all-star power forward Draymond Green of the Golden State Warriors doesn’t really pay attention to analytics and plays more off emotion and feel. As does every player in some way or fashion. Analytics are a good tool to show just how great Green is and the different ways he affects the game.

We can look at the Warriors’ team field goal percentages when he is at center instead of power forward. We can look at numbers to see how Green was affected if he played with too much emotion and got a technical foul. Did emotion affect him in a negative or positive way in the game? How do those numbers look over an 82-game season? Over his career? We can have so much fun looking at the numbers now that we appreciate Green playing off emotion.

Or how about noticing Green as one of the best decision-makers in the whole NBA? Only Curry and Paul produced more points per possession (including assists) than Green this regular season at 1.4 points per possession. His numbers are better than any other guard or forward in the NBA. And Green had over 1,800 possessions. These numbers point to a highly effective power forward “guard” there.

Looking at basketball in different ways doesn’t make any one way wrong. We should embrace the diversity of views and approaches and recognize that analytics can help integrate and enhance our enjoyment of the game. The point is the game can be looked at differently and thought about differently, by anyone.

I’m grateful to Wilbon for understanding the importance of maintaining the integrity of basketball by not abusing these tools, but by creating balance between analytics and acknowledging the importance of the feel and emotions. There is nothing robotic about analytics or having a deeper understanding of the game we all love. It makes us love it even more. Remember there is “strength in numbers.” It gets me emotional just thinking about it.