Long before Giannis Antetokounmpo was born, Kareem Abdul-Jabbar led the Milwaukee Bucks to their lone NBA title in 1971 by dominating in the paint. In order for Antetokounmpo to bring a long-awaited second title to Milwaukee, playing like Abdul-Jabbar in the post appears to be the best way to make that happen.

Antetokounmpo dominated in the post like Abdul-Jabbar during the Bucks’ 120-100 Game 3 victory over the visiting Phoenix Suns on Sunday night at Fiserv Forum. He didn’t shoot a field goal outside of 5 feet and finished with 41 points and 13 rebounds. Antetokounmpo now has three 40-10 games this postseason, including his last two outings. The NBA record for the most 40-point, 10-rebound games in a postseason run is five, held by Abdul-Jabbar (1977) and former star center Shaquille O’Neal (2000).

“To watch him play is to see not just what is, but also what is possible,” Abdul-Jabbar once wrote to Time magazine about Antetokounmpo.

Back during the 1971 NBA Finals, Abdul-Jabbar made a championship possible in Milwaukee by averaging 27 points per game on 60.5% shooting with a mixture of skyhooks, layups, dunks and post moves. The Bucks swept the Washington Bullets in four games to win their first title and the 7-foot-2 center won the Finals MVP award.

In the Bucks’ first win of the 2021 Finals, Antetokounmpo became the only player in the last 25 seasons to score 40 points in a Finals game without making a field goal outside of 5 feet. The next closest during that span was LeBron James (twice) and David Robinson with 25 points. Antetokounmpo’s 14 made field goals within 5 feet of the basket tied for the third-most in a Finals game over the last 25 years. He also was a perfect 13-for-13 in the restricted area, which is the most shots made in the restricted area in the last 25 years.

“When he’s rolling sometimes, like he was these last two games, you’ve just got to give him the ball, give him his space and allow him to go to work,” Bucks forward Khris Middleton said of Antetokounmpo.

Antetokounmpo also had six assists in Game 3 and is averaging 4.7 assists in the Finals to aid Middleton and Jrue Holiday.

Said Bucks forward Bobby Portis: “Obviously, Giannis can go out there and score 40 points all the time. But when everyone else is involved, it kind of unlocks him a lot more and kind of creates mismatches and one-on-one a lot more and guys can’t really dig in and be over the top and X-out backside and do things like that.”

Antetokounmpo joins O’Neal (2000) as the only two players to have 40 points on 60% shooting in consecutive Finals games.

Abdul-Jabbar didn’t shoot 3-pointers during his career, and Antetokounmpo might be better off if he didn’t either. Antetokounmpo made just 10 of 55 3-pointers (18%) in the first three rounds of the postseason. So far in the Finals, he has missed seven of nine 3-point attempts. But on this night, the Bucks made a concerted effort to push him to score in the post, giving him a career-high 16 touches in the paint in Game 3, according to Second Spectrum.

Another similarity between Abdul-Jabbar and Antetokounmpo is they both aren’t great free throw shooters. Abdul-Jabbar shot 72.1% from the free throw line for his career. Opposing fans have been taunting Antetokounmpo by counting how long it takes him to shoot a free throw. He missed 12 of 30 during the first two games of the Finals as Suns fans heckled him. But back home in Game 3, Antetokounmpo got into a rhythm and nailed 13 of 17. 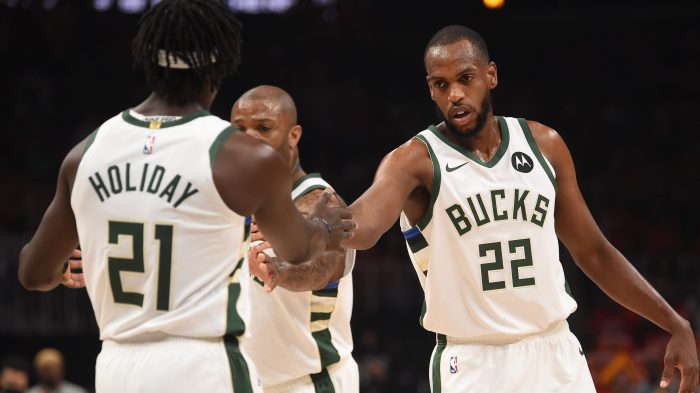 Meanwhile, Suns starting center Deandre Ayton was limited to 24 minutes due to five fouls, which slowed his 18-point, nine-rebound night.

The final common basketball bond between Abdul-Jabbar and Antetokounmpo is how they prefer the attention to be on the team. Abdul-Jabbar has several renowned quotes about the importance of winning as a team despite all of his countless individual accolades. Antetokounmpo is of the same mentality.

“Five guys on the court working together can achieve more than five talented individuals who come and go as individuals,” Abdul-Jabbar famously said.

After Game 3, Antetokounmpo referred to his teammates many times.

“I’m going to compete as hard as possible and I’m going to do the right thing to help my team be in the right position and have the opportunity to win any game we play,” he said.

Abdul-Jabbar predicted on Twitter before the NBA Finals that the Bucks would win the Finals in six games. While the Suns still hold a 2-1 lead in the Finals, Antetokounmpo being legendary in the post just like Abdul-Jabbar was in 1971 could finally make history in Milwaukee.