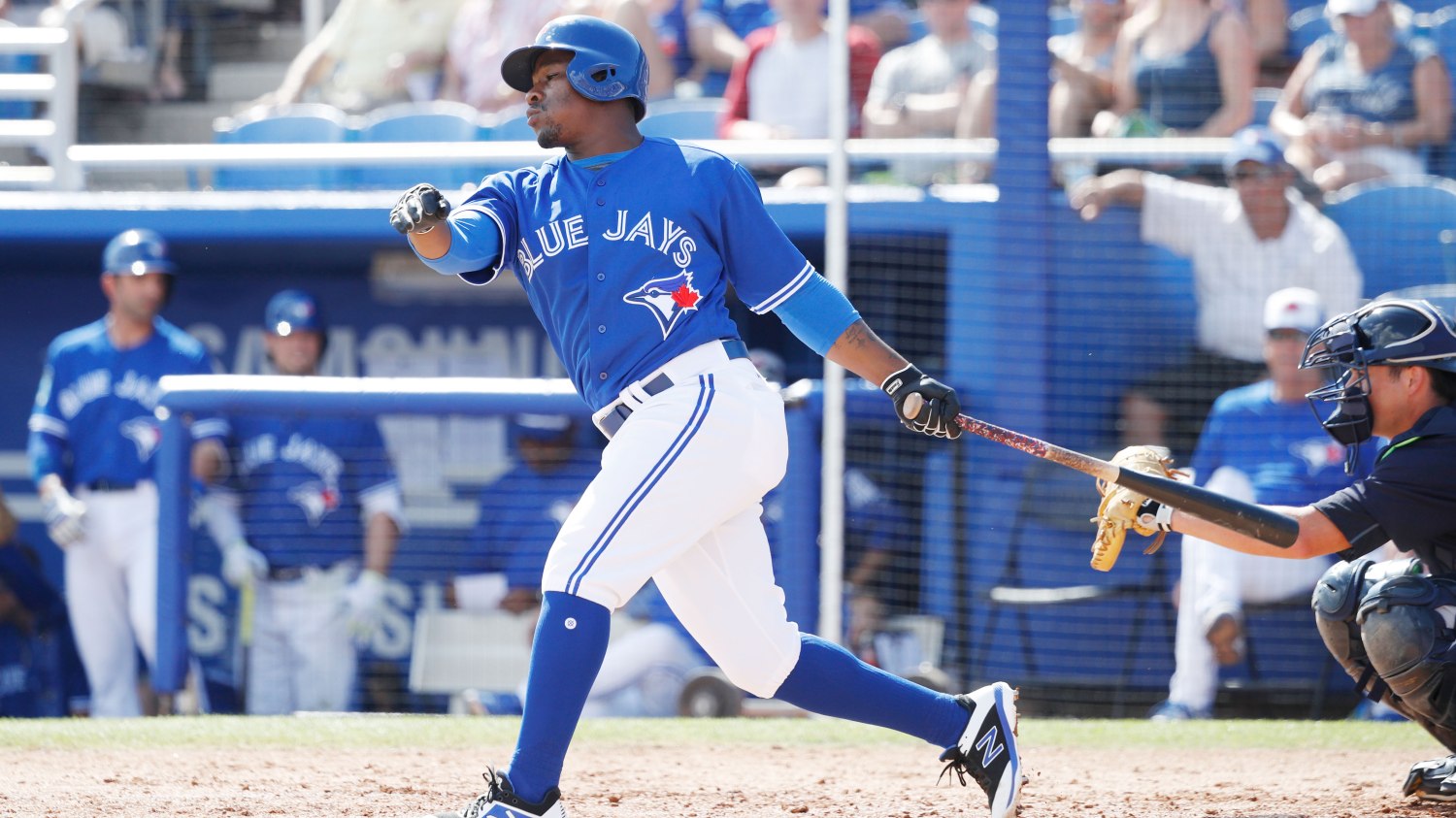 With hits hard to find, he’s bouncing between the Blue Jays and AAA

By Jesse Washington @jessewashington
May 16, 2018

BUFFALO, N.Y. — Bottom of the third inning, two outs, runners on first and second: Mpho Gift Ngoepe stepped into the batter’s box last week under unusual pressure for an early season at-bat in a minor league ballpark with his team leading 4-0.

This was Ngoepe’s first game since the Toronto Blue Jays sent him down, for the second time this season, to the AAA Buffalo Bisons. He had gone 1-for-18 in the bigs, with 12 strikeouts. In the minors this year, he was 4-for-25, with another dozen whiffs. Ngoepe needed a hit like LeBron James needs hair. Especially since Ngoepe had led off this inning with a weak fly ball to right field, before his teammates started smacking pitches around the stadium.

“Wow, I’m the first out, I might be the last out,” Ngoepe thought as he dug in. “That’s embarrassing.”

It was another pivotal moment in an improbable baseball life.

Born in the Limpopo province of South Africa, Ngoepe (pronounced en-GOH-pay) learned the game while living with his mother in a tiny room at the baseball stadium where she sold refreshments. He was discovered at a baseball academy in Italy, then spent nine years in the minor leagues. Last season, he became the first African-born player in major league history when he suited up for the Pirates. He lasted about a month before the Pirates sent him back to the minors and then traded him to the Blue Jays in the offseason. Ngoepe made Toronto’s major league roster this spring as a vacuum-gloved utility infielder. But he couldn’t put his bat on the ball and was shipped down to Buffalo.

His first name, Mpho, means “gift” in the Sotho language, and his mother gave him the same middle name in English. Now 28, Ngoepe is focusing all his abilities on sticking in the majors.

“Somebody did tell me once upon a time, it’s not easy to get in the big leagues, but the hardest part is to stay in the big leagues,” Ngoepe told me in Buffalo, New York. He wore a T-shirt with “GIFT” printed above “1/1,200,000,000,” signifying his unicorn status among more than a billion Africans.

“I’ve just got to look at myself and ask myself, what does it take? It’s a question that I have right at this moment.”

I first met Ngoepe the second week of the season, in the visitors locker room at the Baltimore Orioles’ Camden Yards when he was still with the Blue Jays. He’s 5 feet, 8 inches and a square-shaped 200 pounds, with subtle tattoos and an inch-long scar under his left eye from a second-base snafu back in Class A ball. But the first thing you notice is his demeanor. Ngoepe radiates an air of earnest, humble joy often lacking in American pro athletes whose talents have entitled them to special treatment since childhood.

“It’s been an overwhelming experience,” Ngoepe said in his South African accent. We talked in the dugout before the game, the stadium’s lush grass stretching to the retro grandeur of the red brick warehouse beyond right field. “The day that I made my debut, people back home went crazy. They didn’t know who I was in the beginning and throughout the minor leagues, and when I made the big leagues, they were all happy and sending me support and love and everybody was so excited for me.”

“Wow, I’m the first out, I might be the last out,” Ngoepe thought as he dug in. “That’s embarrassing.”

“They were proud of me and they’re still proud of me, even though I’m not starting each and every single day in the big leagues.”

Ngoepe got there with his glove. Baseball America rated him the Pirates’ best defensive infielder in the minor leagues from 2013 to 2017. He believes any ball he can touch is an out. At the start of this week, he had a .978 fielding percentage in his minor league career and zero errors in 42 MLB chances.

Although baseball’s popularity in South Africa ranks somewhere behind soccer, cricket, rugby, field hockey and something called netball, Ngoepe honed his skills while growing up at the field. His single mother secured a job at the stadium in Randburg, and she was allowed to live with her toddler son in the 7½-by-9-foot room where snacks and beverages were sold. Little Gift climbed the ladder from mascot to bat boy to prodigy. At age 10 he played on a national team that went to Brazil, and he later competed in Mexico and Cuba. In 2008, he went to Italy for the MLB European Academy, where he caught the eye of instructor Barry Larkin, the Hall of Fame shortstop for the Cincinnati Reds. The Pirates signed him for a $10,000 bonus.

Now he needs to focus on his bat, which has been tough with the Jays since he played only every four or five days. He has tried wearing glasses — he has 20/20 vision in his left eye and 20/25 in his right — but they threw off his depth perception, so he has another pair on the way and plans to wear them only in practice this season.

“It’s really hard to hit at this level anyway, but when you’re not playing much, it’s that much tougher,” said Toronto manager John Gibbons. “For a guy that doesn’t play much, as long as I’ve been around, usually those guys, they complain. But you’re not going to hear a negative word out of Gift. He just shows up and whenever you ever need him, he’s ready.

“There’s just something about him,” Gibbons said. “He’s one of those guys you root for, you know. Not because he’s an underdog, how it all came about, but guys like him that really have the attitude he has on life, you want to see him achieve his dream.”

Ngoepe is still living in hotels since he’s bouncing back and forth from Buffalo to Toronto. He bought his first car this spring, a Kia Optima. He’s in a serious relationship with a woman he met during spring training.

It seems fitting that the Jackie Robinson of the motherland would come from South Africa, a country whose history of white supremacy resonates in an America that can still feel caught up in it. But when I ask Ngoepe about his observations of race relations in America, his perspective is as unexpected as a brushback pitch.

“I mean, yeah, the racism. You do see it, especially this year when I took my girlfriend back to South Africa with me, people were looking at us kind of weirdly because it’s like, ‘Oh, this guy’s dating a white girl.’ It’s like, well, hold on a minute. And we didn’t really care because we’re just doing our thing. In America, you don’t see it as much because it’s more accepted here than it is back in South Africa. We just got past apartheid in 1990.

“I’m just happy to be here. It’s a lifelong dream of me being a kid and saying I’m going to be in the major leagues one day. And here I am today, and I’m just taking it all in and enjoying all the experience and everything that it offers.”

He still loves his country, of course, and returns every offseason. He’s building a home in Limpopo and plans to donate a portion of his earnings to a South African charity focusing on animal conservation. An image of the continent is tattooed on his left shoulder, not far from the inked Tupac Shakur song title “Life Goes On,” a Bible verse from Jude 1:21 and his personal mantra: “Live every moment, laugh every day, and love beyond words.”

“In this game, you don’t know what’s going to happen,” he said at Camden Yards. “The biggest life lesson in this game is, probably, control what you can control.”

He started at second base against the Orioles that night. Batting ninth, he went 0-for-3 with two strikeouts.

A month later, Ngoepe was in the batter’s box wearing a Buffalo Bisons uniform, trying not to make two outs in one inning.

Fewer than a thousand people were in the stands for the midweek afternoon game. Rather than Camden Yards’ elegant landscape, a chain-link fence beyond the outfield wall gave way to a drab parking garage and the tangle of freeway lanes.

Ngoepe took five breaking balls, ran the count to 3-2, then rapped a fastball between the third baseman and shortstop for a base hit. The runner on second scored. Ngoepe reacted as if nothing special happened.

In the sixth inning, Ngoepe led off with a line-drive single to center. In the seventh, with two outs and the bases loaded, he worked the pitcher for a walk and another RBI. By the end of the game he had raised his batting average from .160 to .214.

After the game, I asked him about being sent down to the minors.

“The way everything went, you know, it sucks,” he said. “Nobody likes to be in that predicament. And so, what you can do with it is be here and just go out and play the game. The energy that I bring, the attitude. You know, helping my teammates. Just having fun.