Golden inspiration: USA Volleyball’s Black stars helped make history – and can serve as catalysts for changes in the sport

‘Volleyball has not done enough to be more welcoming’

As the winning point, nearly 60 years in the making, hit the floor last month at the Tokyo Olympics, the members of the U.S. women’s volleyball team did the same thing. They collapsed together in a mass hug with tears of elation, pride and no small measure of relief.

The U.S. women won what is perhaps an even tougher overall tournament, the FIVB Volleyball Women’s World Championship, in 2014. But the Olympic gold was the last prize that had eluded them, and this year’s team carried the hopes and dreams of the entire U.S. volleyball world – players and coaches past and present – on the joyride with them. It created a buzz for the sport as the 2021 collegiate season is now getting underway.

“In the gym, we always talk about doing what has never been done before,” three-time Olympic medalist Foluke Akinradewo Gunderson said. “That’s been our theme for a very long time. A theme that kind of just seemed on the horizon that we couldn’t quite reach. To have finally accomplished it in the manner we did makes it so thrilling. For USA Volleyball and our team, we’ve changed the culture and kind of set a blueprint as to how things should be run.”

And for the four Black women on the U.S. team – Gunderson, Jordan Thompson, Haleigh Washington and Chiaka Ogbogu – there was another layer of meaning with this gold. They are role models and inspiration to millions of youngsters in a sport where Black women have long excelled but often haven’t been represented or felt embraced.

There is a history of Black women who have been college, pro and Olympic standouts, including the legendary Flo Hyman, who led the 1984 U.S. team to a silver medal to sisters Kim, Elaina and Beverly Oden to Teee Williams, to Dietre Collins-Parker, to Tara Cross-Battle, to Danielle Scott-Arruda, to Ogonna Nnamani to Destinee Hooker to Megan Hodge to Alisha Glass, among others. Scott-Arruda played in five Olympics, and Cross-Battle in four. Still, many Black women have felt marginalized or overlooked in the sport.

“I know from speaking at club tournaments, I see the girls who look like me and look up to me,” Gunderson said. “And I am so proud to represent them because it’s true, we don’t have great representation in this sport. I hope little Black girls and boys can see us and know this is something that they can do and aspire to be.”

The four compete professionally overseas and will take with them the glow of the gold, along with the knowledge that their impact on the sport is far-reaching. Ogbogu says she hears that from parents of Black children, especially, even more than from the players themselves.

“At a young age, I know for a fact I would not have been bold enough to go talk to someone I looked up to,” Ogbogu said. “It’s often parents who tell me how much it means to them, especially Black parents who are trying to navigate the volleyball scene, because it’s not easy.

“I think it’s cool that they are comfortable enough to come to me with their questions and concerns and I’m able to help. Because when I was going through it, I know my parents really had no idea what to do sometimes, and we were relying on others to kind of guide us.”

Butler University’s Sharon Clark, who has helped many players and parents with that journey, is finishing her term this year as president of the American Volleyball Coaches Association (AVCA). She is the first Black woman to hold that position. Clark is in her 22nd season with the Bulldogs and 29th overall as a college coach, and she played at Sacramento State from 1985 to 1988.

“When I played, we were just thrilled to see one other Black person on the court – a lot of us were the only Black women on our teams,” Clark said. “There are a group of us who have been driven for the last few decades to make our sport more inclusive and also provide ways for girls to get into it.

“Because volleyball is an expensive sport to get into and play at the highest levels. So in that way, it’s exclusionary. It’s become more and more a ‘country club’ sport like tennis and golf because of the cost. If you look at our last several Olympic teams and trace how they came up, they all played club volleyball. That’s at least $7,000-$10,000 a year easily, minimum, not including travel. We have 12-year-olds now who are crisscrossing the country to play club volleyball. We are systematically eliminating a population of young women from this sport.”

Clark explained that volleyball is a very technical sport that requires precise training for players to become elite. Also, unlike a sport such as basketball, where skills such as shooting and dribbling can be practiced alone inside or outside, volleyball is tougher to work on alone and there are far fewer available courts. Boys or girls looking for pickup basketball games can usually find them right in their neighborhood. That’s not the case with volleyball.

“Volleyball has not done enough to be more welcoming,” Clark said. “There are lots of great players who make it. But there would be three, four … maybe tenfold more if we opened ourselves up more as a sport. The kids who get through tend to be from more middle-class to upper-class families who come from schools where they have a good basis for the sport. For kids from schools that are high African American population or very diverse, we literally exclude them from the sport.”

In the five major conferences, including the Big Ten and Pac-12, which are the volleyball powerhouse leagues, there are currently two Black female head coaches: Iowa’s Vicki Brown and Virginia Tech’s Marci Byers. Michaela Franklin, who was coach at Clemson for four seasons, was fired in May. The NCAA survey showed five Black women and one Black man as assistants at major conferences in 2019-20. 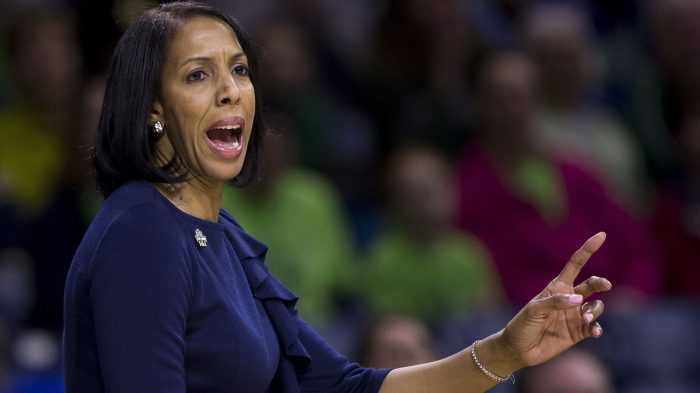 Black coaches are on the rise among NCAA basketball teamsRead now

“It’s difficult when the coaching pool is very limited in terms of Black women being in key positions,” Clark said. “I think that plays some into the typical stereotypes that only certain people can do certain things.

“I look at the NFL or NBA, where there are so many Black men who play those sports, and they’ve done things like the Rooney Rule to try to increase the pool of Black coaches. There really hasn’t been that push on the collegiate level outside of probably football and men’s and women’s basketball.”

There’s also the fact that that there are 1,060 NCAA women’s volleyball programs across all divisions compared with just 170 for men. That means that the jobs for women’s programs are higher-paying and more prestigious, and those positions have always been sought after by men. No female head coach has ever won the NCAA Division I volleyball championship since tournament began in 1981.

Among SWAC programs, Florida A&M (11) and Alabama A&M (10) lead the way in NCAA tournament appearances, while Howard is leads the MEAC with five. The Bison had a turnaround in the last nine years under coach Shaun Kupferberg, who is white. He has led Howard to five MEAC tournament titles. But from an NCAA tournament perspective, the MEAC and SWAC combined have won just two NCAA tournament matches.

Clark knows it is a long road to travel for Black women in volleyball, and at times it has been understandably exhausting for her. She wrote a piece for the AVCA last summer talking about her love of volleyball, and explained all the scars it also has left on her. VolleyballMag’s Lee Feinswog, who provides the most widespread coverage of the sport in the United States, also wrote last summer about the experiences of Black coaches in the sport.

Clark points out that for volleyball to continue growing, ultimately it needs to be “more intentional” about making the sport accessible to Black players. And in doing so, there will be more stories about amazing athletes such as Gunderson, Washington, Thompson and Ogbogu, who made history this summer.

Gunderson, along with U.S. teammate Jordan Larson, won Olympic silver in 2012 and bronze in 2016. She wasn’t even sure she would return for the 2020 Games, as she and her husband Jonathan Gunderson wanted to start a family. She had their son Kayode on Thanksgiving Day in 2019, but not without complications. She had diastasis recti, a separation of her abdominal muscles, that severely weakened her core.

So the postponement of the 2020 Tokyo Games to 2021 actually helped give her more time to regain that core strength. She said it all flew through her mind – the years of training, the successes and disappointments, the physical struggles – as she saw her close friend Larson score the gold medal-clinching point.

It’s still sinking in for the entire U.S. team, in a wonderful way. Thompson was honored at a preseason match at Cincinnati. Ogbogu got a parade in her hometown in Texas. Gunderson said of all the USA Volleyball teams she’s been on in a lengthy career, this one was by far the most open to players being vulnerable and sharing their true selves and innermost thoughts, allowing them to help each other through difficulties and bond more as teammates.

Gunderson takes pride in being an inspiration as a Black woman and hopes the team’s gold medal can be a catalyst for the sport. She will always remember in detail that moment in Tokyo when she knew she was an Olympic champion.

“We always believed in ourselves that we could do it, but we’ve just been working at this for so long and have invested so much,” Gunderson said. “It represented all that we had committed, the love we have for each other and the love for the game. It was all the emotions and gratitude flooding out.”