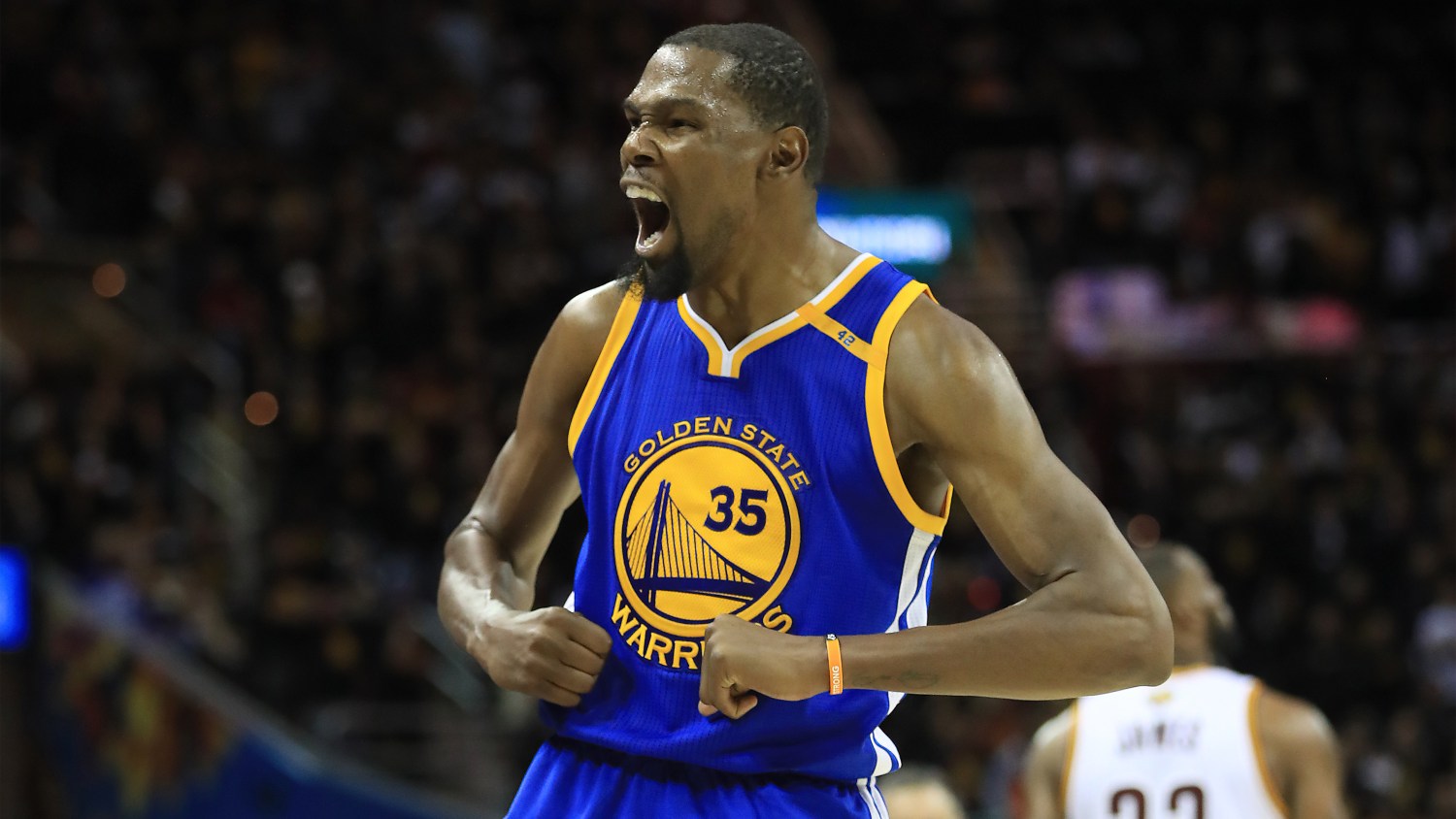 Kevin Durant #35 of the Golden State Warriors reacts against the Cleveland Cavaliers during the second half in Game 3 of the 2017 NBA Finals at Quicken Loans Arena on June 7, 2017 in Cleveland, Ohio. Ronald Martinez/Getty Images
2017 NBA Playoffs

In a season that almost ended in February, All-Star is on the verge of his first NBA title

“Is this just your time?” I asked Kevin Durant, on the eve of having everything he ever wanted in basketball. He cupped his chin. Took a few seconds to think about it.

“I don’t even know what that means,” he finally said as we walked down a corridor at Quicken Loans Arena Thursday. “The time is now — always. It’s not about, ‘Your time.’ Either you’re going to succeed or you’re going to fail. And … I like failing.”

“Yeah,” he said, nodding. “Because it sets you up for success. That’s just a part of life. So I don’t feel like it’s ‘my time.’ I feel like I put the work in and I learned from everything and I’m just trying to stay in the moment and enjoy everything — win or lose.”

Now that he’s 48 minutes away from his childhood fantasy, and the Golden State Warriors are one win from 16-0 playoff immortality — we need to be reminded that Durant didn’t take the path of least resistance to an NBA championship.

This wasn’t a coronation planned and executed at a Long Island resort in the offseason. This was a chaotic odyssey that began in Seattle, careened through Oklahoma City and only ended up in Oakland, California, because a 10-year veteran had personally and professionally outgrown the franchise that drafted him.

He didn’t join other hired guns. None of the Warriors’ other All-Stars (Stephen Curry, Klay Thompson and Draymond Green) were top-five draft picks or acquired from another team. No, he joined a group of elite athletes who, like Durant, understood how to create the sublime choreography of teamwork, the find-the-open-man, let-the-ball-do-the-work ingredient that has made the game as beautiful as ballet for a century.

And for all their embarrassment of talent, neither Durant nor the Warriors waltzed unscathed through their first season together.

Because we also need to remember his leg folded like a beach chair on Feb. 28 in Washington, D.C., and he didn’t know whether his season was over or not.

Having been in their locker room the night Zaza Pachulia accidentally rolled into Durant’s leg in the opening minute of a road game at Washington, I saw only looks of disbelief and outright sadness on the faces of Curry and his teammates. The Warriors weren’t saying anything, but the players began to receive texts from Green, telling them Durant had suffered a broken tibia and would be out for the season.

It didn’t feel like a locker room of NBA millionaires who had the temporary misfortune of losing one of their teammates. It felt like a team of high school seniors who had just lost the final game of their careers, and now had to figure out what they were going to do with the rest of their lives.

Without Durant, the Warriors were still going to be one of the toughest outs in the playoffs. But no team in NBA history had lost one of its superstars that late in the season and still raised the trophy in June.

Not the Los Angeles Lakers in 1989 when Magic Johnson and Byron Scott were sidelined against the Detroit Pistons in the Finals. Not the Pistons when Isiah Thomas came up lame against the Lakers in the 1988 Finals. Not the New York Knicks in 1999 when Patrick Ewing went down before the San Antonio Spurs won their first championship.

Durant cried in a hospital room as he realized his season – really, his immediate dream of winning a title with this team – was over. And it happened in his hometown, no less.

Then the greatest change of fortune in their season happened. While Durant was headed back to the team hotel, the examining physician called with a new diagnosis. Durant had a deep bruise of the tibia instead of a broken bone. It’s not every day that a player is told he has a sprained MCL that he rejoices and hollers. But that’s what Durant did, because it meant that with proper rehab he could make it back before the playoffs started.

“My mindset just kind of changed,” Durant said. “I decided to fight through it and conquer the journey I’m on.”

He first began shooting. Then he got back the full range of motion in his leg. Then his strength returned. He began running.

“Every day, I worked every day,” he said. “And I started to see the growth and progress. That was exciting because it felt like a different season for me. So I tried to lock in on that. Just be right and ready for the playoffs, you know.”

And isn’t that what it’s really about anyway – April, May and June? Money time. If not for LeBron James’ block or Kyrie Irving’s shot a year ago in Game 7, who knows if Durant makes the move to Oakland? What franchise would have gone out and reinvented its roster if it had won two straight titles?

But that 3-1 collapse happened, the Warriors’ courtship of Durant began, and Durant took the plunge.

Amid all the talk that the Little Team That Could had morphed into the NBA’s new Death Star (OK, we originally led that chorus), and what kind of superstar just ups and leaves his small-market playoff team to join a ready-made champion, was the reality of the situation:

The Warriors plus Durant would never be able to overachieve. Even if they won another 73 games in the regular season, it wouldn’t matter. There was only one acceptable outcome once the deal was made, and that would be the Warriors not only reclaiming the NBA title from the Cleveland Cavaliers, but doing so in such impressive fashion that no one could ever say Durant ruined the chemistry of a fuel-injected machine.

Through an injury, through rehab, through the adjustments of moving teams and towns and learning to co-exist with a two-time MVP and his teammates, Durant, the presumptive MVP of these NBA Finals, is 48 minutes from delivering the promise his signing held.

The truth, in hindsight: The only obstacle that was going to derail the Warriors from winning the title was Durant’s injury. Once he came back from that, no one could stand in their way.

Collins: “That’s exactly what happened. Everything he said played out and came to fruition. Once K.D. came back, everything was in place again.”

From what we’re seeing now – the historical 15-0 playoff record, the pull-up, 28-footer in James’ mug that gave the Warriors the lead in the final minutes of Game 3 – it’s all the result of Durant being able to come back from the injury.

“For me, it was different phase, it became a different obstacle in the season,” Durant said. “We were so used to going through shooting slumps or losing streaks. Then it was like, ‘How can I bounce back from this?’ And if I could bounce back from it, make that part of the journey, too, then everything was still possible for all of us again.”

Remembering that night in the hospital in Washington, knowing how one fork in the road can cripple a season and sometimes a career, Durant kept walking down the corridor at The Q Thursday, on the eve of everything he ever wanted in basketball.