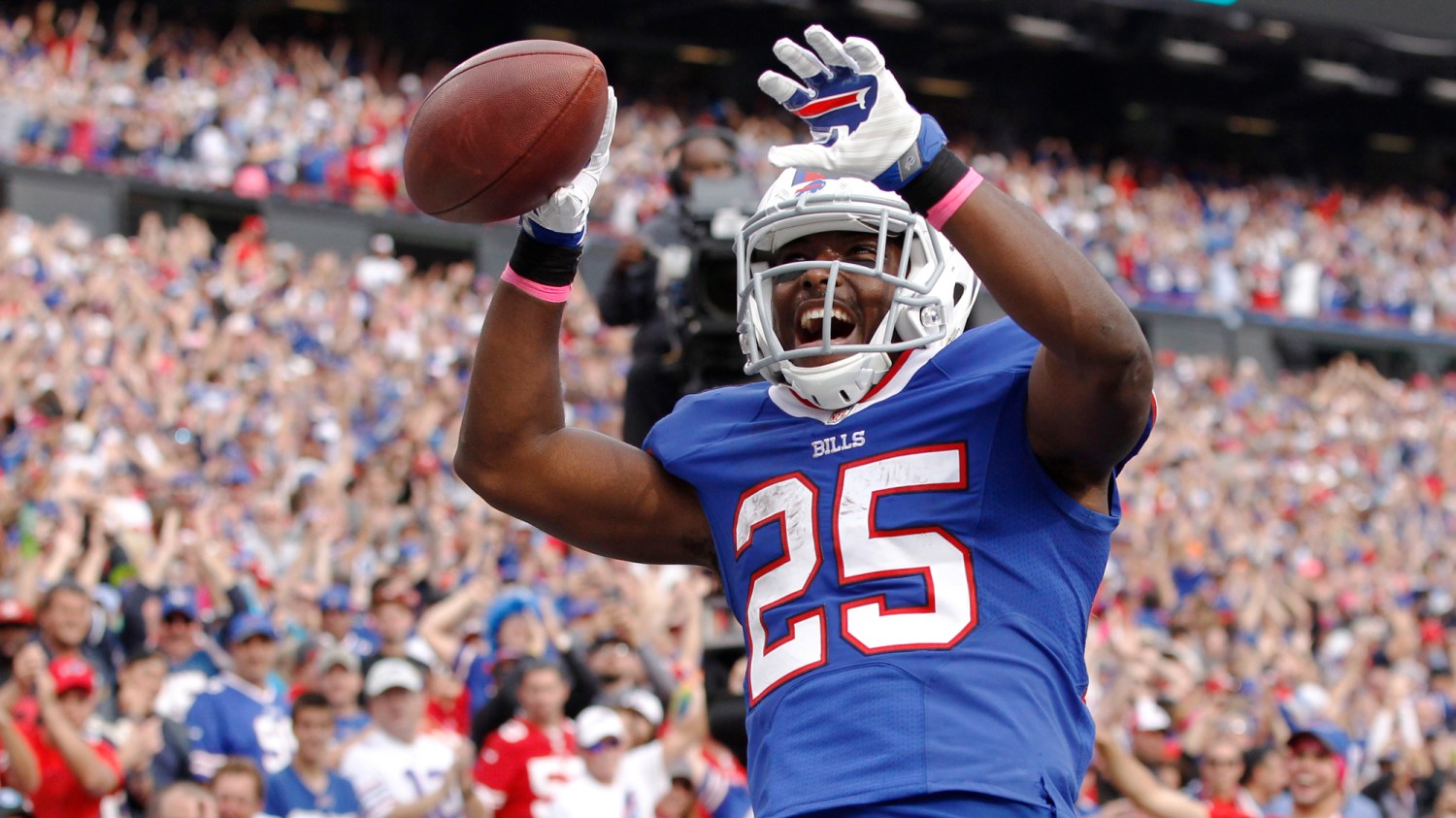 Buffalo Bills running back LeSean McCoy (25) celebrates after scoring a touchdown during the second half against the San Francisco 49ers at New Era Field. Kevin Hoffman-USA TODAY Sports
NFL

Guess who’s back? The real LeSean McCoy is worried about making plays, not his hamstring

As the clear offensive engine of the Bills, McCoy is looking beyond payback and injuries to bringing the Bills back to the postseason

With all the mess revealed after LeSean “Shady” McCoy was traded from the Philadelphia Eagles, he badly wanted to blow up last season for the Buffalo Bills. But give him credit for keeping it real: McCoy would be the first to tell you he was just aight. Now, Shady is back.

Finally healthy (mostly), the former NFL rushing champion is off to one of the best starts of his lit career while leading the Bills’ resurgence. After dropping its first two games, Buffalo has racked up four straight victories and McCoy has been the offense. His re-emergence among the game’s elite players is the best news Bills fans have had in a long time – which is why they’ll be holding their breath until Sunday and perhaps beyond.

McCoy’s new hamstring injury has a whole lot of folk nervous in western New York. It’s unknown whether McCoy will play on the road against the Miami Dolphins. Having McCoy on top of his game for the rest of the season is essential for the Bills, who know he’s that dude.

“Whether it’s in the running game or the passing game, he’s a playmaker. He can create [big] plays. Some of those plays … from the backfield position, there’s only one or two guys, maybe just him, that could do that in the National Football League.”

During Buffalo’s four-game run, McCoy has rushed for 470 yards. Only Dallas Cowboys rookie Ezekiel Elliott has more yards (703 to 587) than McCoy. The Bills are first in the NFL in rushing with 166.5 yards per game.

In a familiar story for Buffalo’s opponents, the view from the 49ers’ sideline Sunday was wack. “To get the ball ran on you like that, when you know they’re going to run the ball, it’s embarrassing,” 49ers safety Eric Reid said.

And if you think McCoy didn’t enjoy sticking it to San Francisco first-year head coach Chip Kelly, then you need to get some of this tea.

It was Kelly who inexplicably gave McCoy the boot from the Philadelphia Eagles. In 2013, Kelly’s first season as Philadelphia’s head coach, McCoy topped the league with 1,607 yards rushing, 2,146 yards from scrimmage and scored 11 touchdowns. The Eagles won the NFC East title. The next season, McCoy totaled 1,319 yards rushing and scored five touchdowns. The Eagles finished 10-6, but missed the playoffs. In his first six seasons with Philadelphia, McCoy, now 28, established himself as a superstar. Barring major injury, he clearly had a lot of tread left on his tires.

That’s why NFL analysts struggled to explain what in the heck prompted Kelly, who had the most juice in the Eagles’ football operation, to send a four-time Pro Bowler and two-time first-team all-pro to Buffalo for linebacker Kiko Alonso. After the trade, McCoy shared his view.

He went in on Kelly, saying, among other things, that “there’s a reason he got rid of all the black players – the good ones – like that.” Something didn’t add up.

Besides shipping off Shady, Kelly also stunningly released DeSean Jackson, an in-his-prime-stretch-the-field-star receiver if there ever was one. The Washington Redskins quickly scooped up Jackson, who’s still balling out. Jackson and other former Eagles players also have spoken out against Kelly, more so for having a dictatorial approach in Philadelphia than showing overt signs of racism.

Although only Kelly knows what was in his head and heart, this much was clear: His plan failed spectacularly. With the Eagles at 6-9 last season, Kelly was fired before their final game. However, he was still on the job in December for McCoy’s return to Lincoln Financial Field.

Last week, McCoy said it’s all in his rearview mirror.

“To sit here and tell you that it didn’t affect me last year, I would be lying,” McCoy said. “I think anybody, any of you guys, if you’re doing so well at your job and they basically [fire you] … it was tough.”

Especially since McCoy didn’t initially bring it in Buffalo. At least not by his standards.

McCoy’s legs were never completely right. Minor hamstring and knee injuries robbed him of the ankle-breaking ability that made McCoy, well, Shady.

Still, in 12 games, McCoy’s numbers were solid. He rushed for 895 yards (with a 4.4-yard average) and scored three touchdowns. He added another 292 yards on 32 receptions with two scores. Not acceptable, McCoy said.

“I didn’t have a great year last year,” he said. “But if you ever ask players from other teams … for sure they’re going to tell you about me.”

“When I was with Washington and he was in Philly, he was definitely someone we were very aware of,” said Bills outside linebacker Lorenzo Alexander, who has a league-high eight sacks. “Every team around this league knows he’s a great back.

“There are a lot of backs who are fast, there are backs who have good vision and ones who can run inside and outside – but he does it all and does it so smoothly. And it’s his ability to cut back and not slow down that makes it so hard. He’s definitely got those moves.”

McCoy’s timing couldn’t be better. Without standout receiver Sammy Watkins, Buffalo hasn’t had much of a passing game. Watkins, who has a foot injury, has been on injured reserve since Sept. 30. He’s more than a month away from potentially returning to the lineup. For head coach Rex Ryan’s staff, McCoy is keeping the lights on.

“He was really disappointed [with] how he played last year,” Ryan said. “But I’ve told him several times, like all of us here in Buffalo, ‘Hey, man, you played great.’ And he’s like, ‘No. I can play better.’ I guess he was right.”

In Ryan’s second year, the Bills have hope again. This could finally be the season that they return to the playoffs after a 16-year drought – the NFL’s longest active streak. By getting his game back tight, McCoy seems ready to lead the Bills on a much better one.