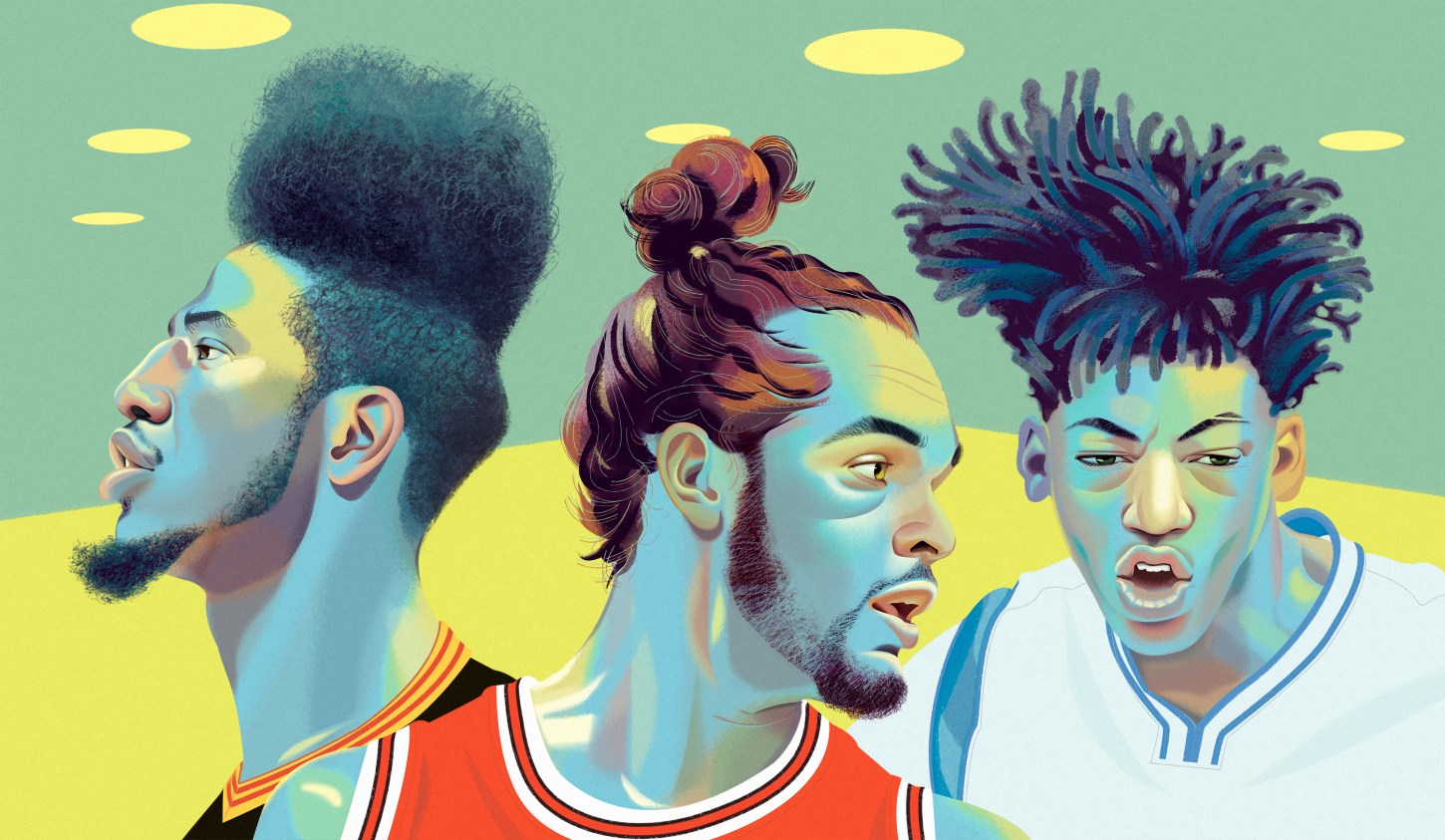 Mohawks to ‘frohawks, fades to braids. Dreadlocks, dyes, twists, parts, and something in the NBA Finals that came close to a conk. Peak hair expression has hit black America, with pro basketball at the forefront of the evolution.

Not all of these styles are new — black folks have been creative with their hair since forever. But in past eras, particular cuts heated up the ‘hood, and then the NBA reflected and magnified those individual trends. Think all of the NBA’s 1970s Afros or 1990s cornrows.

Today, when it comes to black men’s hairstyles, never has one league rocked so many. No one particular style is the style. Anything and everything goes — gloriously so.

Kinky hair arrived in the NBA in 1950, when Chuck Cooper became the first African-American drafted. In keeping with the suits and ties freedom fighters wore to the frontlines of the battle for racial equality, Cooper had the standard civil rights-era haircut: close on the top, closer on the sides. The black power movement fertilized Afros galore in the late 1960s into the ’70s, and they flowered in the NBA, especially Julius Erving’s. In the late ’80s, hip-hop got into the game. A balding Michael Jordan made clean-shaven domes forever cool in 1989. Rest in power, Anthony Mason and his razored designs circa 1994. Long live the cornrows Allen Iverson planted in 1998. The 2000s featured a return to classic fades and Caesars, to the point of anomaly Afros, but also early signs of the creativity – pigtails, yo? – flourishing today.

Now, with cross-cultural pollination and social-media megaphones smashing style boundaries, NBA hair feels like the new sneaker – something to flash, and customize. So sit back as we shape up The Undefeated’s favorite representations of this new black hair apex:

If one thing defines today’s hair era, it’s texture. Dudes have never been so happy nappy. No player grows it more rugged than Lucas Nogueira, the Brazilian 7-footer with the rain forest head cloud. If he picked it all the way out, it would be the biggest Afro ever. Even as is, it can’t be contained.

O.G. of the modern movement. Nobody since Iverson has made his hair as big a part of his brand. James Harden has come a long way from looking like your accountant at the 2009 NBA draft, when he was picked third by Oklahoma City. He started growing his hair in the 2011-12 season, which obviously propelled him to the Sixth Man of the Year award. Harden immediately bolted to Houston and emerged with the full mohawk/beard hookup believed to conceal whales, weather systems, and the championship trophy the Oklahoma City Thunder never won.

Credit Iman Shumpert not only for being ahead of the curve on the high-top fade revival, but for growing it higher than Cliff Robinson — wait , bad metaphor — violating an NBA rule with his hair. After getting a massive do-chop three years ago, Shump’s flattop reanimated, achieving major status by the 2016 NBA Finals — when all of a sudden it wilted under what Undefeated style writer Jill Hudson charitably called a “texturized S-curl situation.” Maybe dude was attempting Malcolm X as Detroit Red. Then came the floppy topknot. Please let the Thugnificent be next.

Got to respect the classic Caesar — close, even length all the way around — that never goes out of style. Even better with the beard connection. After Kyrie Irving’s trey over Stephen Curry won the Cleveland Cavaliers a championship last June, you’re going to see a lot more of this cut than Curry’s high-school-principal fade.

Just like his game, which after five seasons with the Chicago Bulls has gone from anonymous to All-Star, Jimmy Butler’s hair has grown into a marquee attraction. Maybe it’s the perfect top-layer twists, or the precise bald fade leading to his chiseled jawline, or just that dude gets megabuckets. He’s the perfect player for one of the most popular hairstyles of the past few years.

First, let’s set the record straight on the difference between dreadlocks — the rope-clumps created by leaving hair uncombed, popularized by Rastafarians and recently abandoned by The Weeknd – and braids. Kenneth Faried’s hair is carefully assembled into braids. Which look best when a high-energy player nicknamed the Manimal whirls them into an electrically charged mane. Nuff respect to the braids MVP.

Speaking of dreads, young fella is one oversleep away from legit Bob Marley. People get major YouTube hits analyzing the tendrils of Elfrid Payton’s headpiece. In an era of unprecedented hair variety, the Magic point guard has achieved the pinnacle of individuality: There is no name to describe his hairdo, and no way to replicate it.

A fade with braids? Can we call that “faids”? With blond tips? Go ‘head and express yourself. We’ve even seen DeMarre Carroll occasionally add cornrows to the ensemble to hit for the full hair cycle.

Biracial athletes with Joakim Noah’s hair texture have one simple choice: You gotta flow, Jo. His abundant locks used to be gathered into a ponytail that would make Troy Polamalu envious. Now we haven’t seen a man this fierce in a bun since the ancient Japanese samurai.

Jeremy Lin’s parents are from Taiwan. He does not have curly hair. But for sheer variety, creativity and audacity, big up the first Asian-American NBA star. Way more flavor than any Harvard graduate deserves.

From malls to burger spots, you’ve seen the mohawk/afro/fade mashup with optional blond highlights. The best in the NBA belongs to Allen Crabbe, a Portland Trail Blazers wing. Also seen on Jared Sullinger, Kelly Oubre, and Champ, the Mavericks equine mascot. Not for nothing, Crabbe got his new cut just before his breakout third NBA season. Look good, feel good, play good.

Tapered at the sides and neck, long and wild up top – this “Duke Starting Five” cut swept the nation when modeled by the 2015 NCAA champs. Apparently Brandon Ingram noticed before committing to Duke for his one-and-done 2015-16 season. Now that Ingram is a Los Angeles Laker, one of the NBA’s best subplots is whether Ingram’s game and/or cut will eclipse D’Angelo Russell and his bun-top fade.

The oldest player in the league is repping the ’90s harder than Foxy Brown at a Def Jam reunion. But with a modern twist – smooth scalp paired with the luxurious beard. The 39-year-old Grizzly (his team, not his chin) is starting his 17th NBA season. Like every old head, Vince Carter knows that when hair stops growing on up top, it sprouts faster everywhere else.

Back when Latrell Sprewell was choking out coaches and Iverson’s look had NBA commish David Stern shook enough to impose a new dress code, who’d have thought cornrows would ever be … safe? Retro? Almost boring? That’s what they are on Kawhi Leonard, who inherited Tim Duncan’s spot as the quietest superstar in the league. No fancy braid patterns for Leonard. Just 3s, clamps, dunks … and a cornrowed brother hoisting the NBA Finals MVP trophy. That one’s for you, Commissioner Stern.