Hank Aaron wants to be remembered for more than home runs

ATLANTA — Hank Aaron, the man who broke Babe Ruth’s home run record and went on to hit 755 in his career, now wants to be remembered for something entirely different.

The Hall of Fame right fielder and his wife, Billye, have spent two decades building a philanthropic legacy that began with paying extracurricular activity and equipment fees for needy grade school students and now includes college scholarships and a multimillion-dollar grant to the Morehouse School of Medicine.

“When I was a young kid growing up in Mobile, Alabama, I chased a dream and found it and played baseball for 23 years,” Aaron said in a brief interview. “I see these young kids coming along now and they are chasing their dreams. It just so happens that their dream costs a little bit more than mine did. I’m hoping they catch it and that they’re able to do the things they want to do in life.”

Aaron’s Atlanta-based Chasing the Dream Foundation awarded about $350,000 in college scholarships last year, mostly to students attending small, historically black colleges and universities (HBCUs). Aaron beams when talking about his scholarship recipients. “Aren’t they wonderful? I love all my kids who have won scholarships. These kids are something special.”

As many Atlanta sports fans headed to Houston for the Super Bowl in February, the foundation hosted a fundraising dinner at the Delta Flight Museum for its scholarship program. The event was filled with the city’s corporate, political, entertainment and sports power brokers, including Usher Raymond and Carolina Panthers quarterback Cam Newton, who grew up in the Atlanta area and has a home here.

The foundation’s 4 for 4 scholarship program, which was started in 2010, provides at least $4,000 a year for four years to 12 students. Why 12? “That’s the number of times Henry went 4-for-4 in his career,” said board member Allan Tanenbaum.

The dinner, which raised more than $2 million, marked Aaron’s 83rd birthday. Guests lined up to take a picture with Hank and Billye Aaron, 80. Some brought their grandchildren and chatted about Aaron’s sports exploits as they waited to meet him.

“After Henry broke the record, he could have retired as one of the greatest baseball players ever,” said Tanenbaum, Aaron’s attorney and business adviser for more than 40 years. “Instead, he began again and is now one of the most inspiring philanthropists ever.”

In Atlanta’s philanthropic community, the Aarons are “right at the top,” said Sharmen Gowens, CEO of the YWCA of Greater Atlanta. In 2016, the group recognized Billye Aaron with its Woman of Achievement award.

“They give so generously and purely from their heart,” Gowens said. “They are the most down-to-earth people you ever want to meet.”

Billye Aaron worked for the United Negro College Fund (UNCF) for 14 years as a fundraiser. After she retired, she established the Billye Suber Aaron Legacy Scholarship.

“Mrs. Aaron is a strong advocate for education and has been probably since her days at Texas College, her alma mater,” said Justine Boyd, regional development director for the Atlanta region of UNCF, which supports 40 small, mostly private HBCUs. “She received her master’s degree from Clark Atlanta University, so she is a product of HBCUs.

“She wants to ensure that this endowment helps students get the education they need and the world needs them to have.”

Hank Aaron has served on the board of Atlanta Technical College, an adult vocational school, and several students there have received scholarships from his foundation. Two years ago, Hank Aaron gave Morehouse School of Medicine $3 million in honor of his wife. A student pavilion at the school is named in her honor.

At a March 29 fundraiser for the foundation at SunTrust Park, the new home of the Atlanta Braves, the team unveiled a 9-foot bronze statue of Aaron. (The Braves’ home opener in the new park is Friday night against the San Diego Padres.) Aaron retired as a player in 1976 and still serves as a vice president for the Braves organization.

Aaron’s foundation operates on a budget of less than $100,000 annually. It has just one part-time employee, managing consultant Linda Gulley, who works out of her home.

There are currently 27 Chasing the Dream scholars, primarily at HBCUs and schools in Wisconsin. The Aarons have deep ties to Milwaukee, where Aaron began his career.

“They love the people of Milwaukee,” said Gulley.

Current scholarship recipients are attending Spelman, Morehouse and Atlanta Technical colleges in Atlanta; Texas College in Tyler; Dillard and Xavier universities in New Orleans; Mount Mary University and the University of Wisconsin in Milwaukee; Tuskegee University and Talladega College in Alabama; and Fisk University in Nashville, Tennessee. Students at other colleges have received scholarships in previous years.

More than 44 Chasing the Dream scholars have graduated from college and are working in science, medicine, education, the arts and, of course, sports. 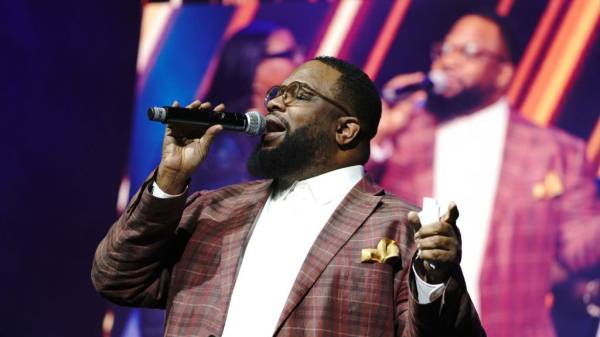 Hezekiah Walker, Virginia Union Center for Gospel Music collaboration will focus on the business of the industry, too Read now

Daron Bowling, who played baseball for Morehouse, attended the March statue unveiling, where he got to meet the Aarons. Bowling, an engineering major from Cincinnati, spent the last three years at Morehouse. In August, he’ll move to Georgia Tech to finish the last two years of his dual-enrollment program.

“The Hank Aaron Chasing the Dream scholarship means so much to me,” said Bowling. “Not only does it relieve a lot of pressure from my parents’ pockets, but it also motivates me to finish school and do something just as great as he did.”

Angela Tuck is an Atlanta-based freelance writer and editor. Her blog, lovemypeople.me, is about faith, family and culture. She has worked as an editor at The Atlanta Journal-Constitution and The Detroit Free Press. She was a reporter for the Lexington, Ky. Herald-Leader and The Tampa Bay Times.