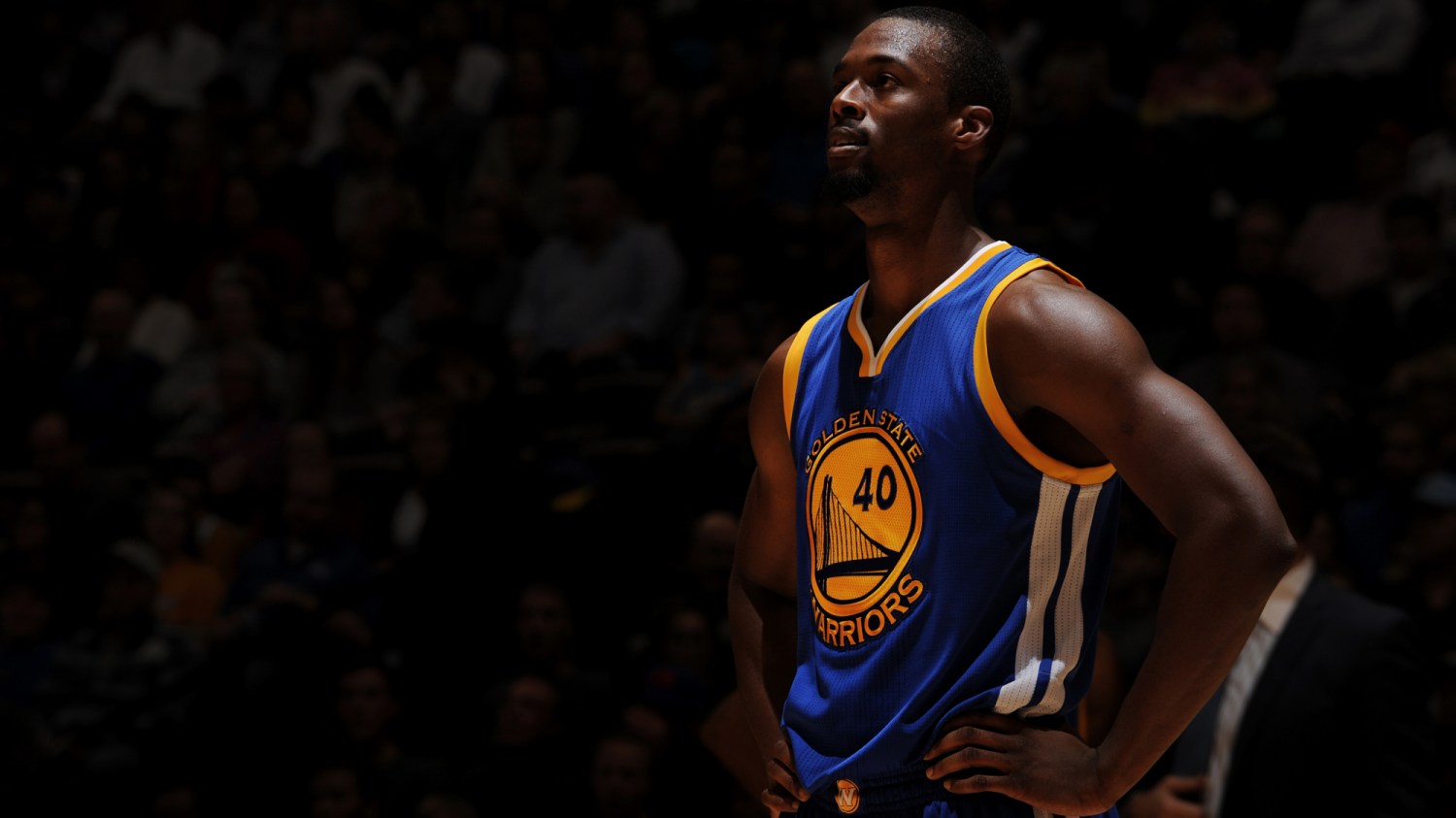 DENVER, CO – NOVEMBER 22: Harrison Barnes #40 of the Golden State Warriors looks on during the game against the Denver Nuggets on November 22, 2015 at the Pepsi Center in Denver, Colorado. NOTE TO USER: User expressly acknowledges and agrees that, by downloading and/or using this Photograph, user is consenting to the terms and conditions of the Getty Images License Agreement. Mandatory Copyright Notice: Copyright 2015 NBAE Photo by Bart Young/NBAE via Getty Images
NBA

Although he’s ready to head to Dallas, the NBA star still has love for Oakland

Kevin Durant is now in need of a Bay Area home after signing with the Golden State Warriors. But six Warriors players had to change their addresses in the process, too — a fact somewhat lost in the biggest NBA news of the summer. And that includes Harrison Barnes, whom Durant is replacing in Golden State’s starting lineup.

Durant’s first game as a member of the Warriors at Oracle Arena in Oakland, California, will take place Tuesday in USA Basketball’s exhibition against China. Meanwhile, Barnes will awkwardly return as a Team USA member after saying goodbye to his former Warriors teammates.

“Right after the KD decision happened, I texted everyone individually something special to them whatever it was, whatever my relationship was with them,” Barnes recently told The Undefeated. “I didn’t want to do the cliché, ‘I’m out, guys.’ I wanted to text each person individually and tell them that we are family and how much they meant to me.”

“The decision was more so made for me,” Barnes said. “I was not necessarily walking away from the situation. I wasn’t saying, ‘I don’t want to be here. I want to go there.’ But at the same time, I’m very excited about Dallas. It gives me an opportunity to grow.”

Durant said he decided to sign with the Warriors after waking up on the morning of July 4. Barnes, however, got the impression Durant was leaning toward the team beforehand. During USA Basketball training camp last week, Durant said he had not talked to Barnes about his free agency decision and how it affected the latter.

“You started to kind of hear rumblings,” Barnes said. “Guys were starting to feel like he was probably going to come that way. It wasn’t a surprise he was coming based on talking to the guys. It wasn’t like, ‘Boom, boom’ [after Durant’s decision].

“That’s where the story gets a little more confusing. It’s more so when that decision was made I texted my teammates and took some time to process it. I got on the phone with my agent and looked at Dallas a lot closer and then I made the decision.”

Barnes, who struggled this past postseason averaging 9.0 points and shooting 38.5 percent from the field, actually turned down a four-year, $64 million contract extension from the Warriors in the 2015 offseason. He received a lot of skepticism for turning it down and also firing his agent at the time.

But Barnes’ gamble on himself actually paid off in the end, and more than just the extra $30 million over four years. Had the 6-foot-8, 210-pounder signed the offered contract extension by Golden State, he could have been traded like Bogut this offseason to make roster and financial room for Durant. As a free agent, Harrison chose his destination in Dallas.

“One of the biggest things that I’ve learned since I’ve been in the league is to trust the process,” Barnes said. “If you believe in something and put in the work, things will happen whether it looks that way or not. You have to finish up the process. I was confident that if I was able to do what I needed to do with the team I was on last year that it will all work out, and it did.

“I wasn’t nervous just because I was betting on myself. I’ve gotten this far believing in myself and hopefully this will work out. I was just doing it one more time.”

Team USA guard Klay Thompson expects Barnes and his other ex-Warriors teammates to be fondly remembered for their roles in winning an NBA title in 2015. Golden State also made a second-straight Finals appearance last season after winning an NBA-record 73 games during the regular season before losing to the Cleveland Cavaliers in the Finals. The memorable and successful Warriors team from the past two seasons was very close and on the same page on the floor.

“It’s part of the biz. It’s unfortunate,” Thompson said. “We will miss those guys dearly. There wasn’t one bad guy on the team. We had so many good times together the last couple of years. We will cherish that for a lifetime.

“I still will hit them up every offseason. I hope ‘Dub Nation’ will give them a big send-off and a big ‘standing O’ every time they see them because those guys sacrificed a lot to win and did everything they could for this organization.”

Barnes will have the first opportunity out of the now ex-Warriors to get a standing ovation on Tuesday.

The last time Barnes and Durant played at Oracle Arena together was when the Warriors eliminated the Oklahoma City Thunder in Game 7 of the Western Conference finals after blowing a 3-1 series lead. But if you’re looking for emotion from Barnes, wait until the NBA regular season.

“It won’t be emotional,” Barnes said. “I had a great experience at Golden State. They were a first-class organization. The fans there were great. It won’t be anything bitterness or anything like that. In the regular season, it will be a different feeling than now. It’s still fresh.

But expect the pain from losing the 2016 NBA Finals and everything that went wrong to stay fresh with Barnes perhaps the rest of his life.

After Golden State took a 3-1 series lead, Draymond Green was suspended for a Game 5 Finals loss and Cleveland won the last three games. Two-time NBA MVP Stephen Curry was injury-riddled during the postseason. Bogut missed the last two Finals games to injury. Barnes combined for 15 total points in the last three Finals games, including a scoreless outing in Game 6. The Warriors’ crowd was tough on Barnes in the Finals as fans moaned and groaned with every miss.

“For a number of reasons, I will never forget losing that Finals. Obviously, for a championship sake. We won so many games and we come up short,” Barnes said. “The fact that I didn’t hit shots. Even if I was playing well at that time, we lost. The Finals aren’t guaranteed every single year and that’s what you have to look at.

“When you get to the Finals, ultimately your season is judged on what you do at the end. Those last two games, obviously, I didn’t shoot it well. That’s part of the criticism. If we win that game, then the storyline is completely different. It’s about how you battled through adversity and won. But we didn’t. That’s kind of the cross you have to bear and move on.”

Along with missing his Warriors teammates, Barnes said he is also going to “miss Oakland a lot.”

One Warriors executive suggested Barnes move to San Francisco upon his arrival in 2012, since the team is planning to eventually move there, and people question the safety of Oakland life. Barnes, however, lived in downtown Oakland during his entire Warriors tenure, loved the city’s diversity and fondly recalls the 2015 NBA championship parade there. He supported Trail Blazers All-Star guard and Oakland native Damian Lillard by attending his third annual picnic in East Oakland last offseason. It wouldn’t be surprising if Barnes eventually bought an offseason home in Oakland, too.

“Oakland was unbelievable,” Barnes said. “When I first got drafted there, there was such a reputation about what Oakland was like. Myself actually living there for four years, living downtown, I was able to get a great appreciation for the community and the people that are there. It made me realize that you can’t just take what people say at face value.

“People were trying to say that it is a community that is run down, that you shouldn’t live there, you should live in San Francisco. People there were always consistent with me. They always showed me love. It really does have a lot of culture. It’s changing so much even the four years I was there.”

Barnes also made his presence known in Silicon Valley shortly after he first arrived from the University of North Carolina in 2012. He initiated and actually landed visits with the chief executive officers of Twitter and Yahoo before his rookie year and took tours of their facilities. The 24-year-old is also an investor and spokesman for Palo Alto, California-based Walker & Company Brands along with USA Basketball teammate Carmelo Anthony and ex-Warriors teammate Andre Iguodala.

“Harrison Barnes is one of the smartest young athletes I’ve ever met,” Walker told The Undefeated. “Always thinking for the long term. We’re lucky to have him as an investor and friend.”

Barnes is expected to go from living in downtown Oakland to downtown Dallas soon. He also sounds like he has moved on mentally to a new beginning with the Mavs while Durant has moved on to the Warriors.

“They have a championship coach, a stable management situation and one that is comfortable spending what it needs to be on the team,” Barnes said. “Look at the group of guys. You have Dirk [Nowitzki], who is going to be a Hall of Famer. You got guys like Wesley Matthews, who I am going to be playing alongside for a long time. We got guys like D-Will [Deron Williams]. Obviously, we got Bogut and that adds a lot, too.”