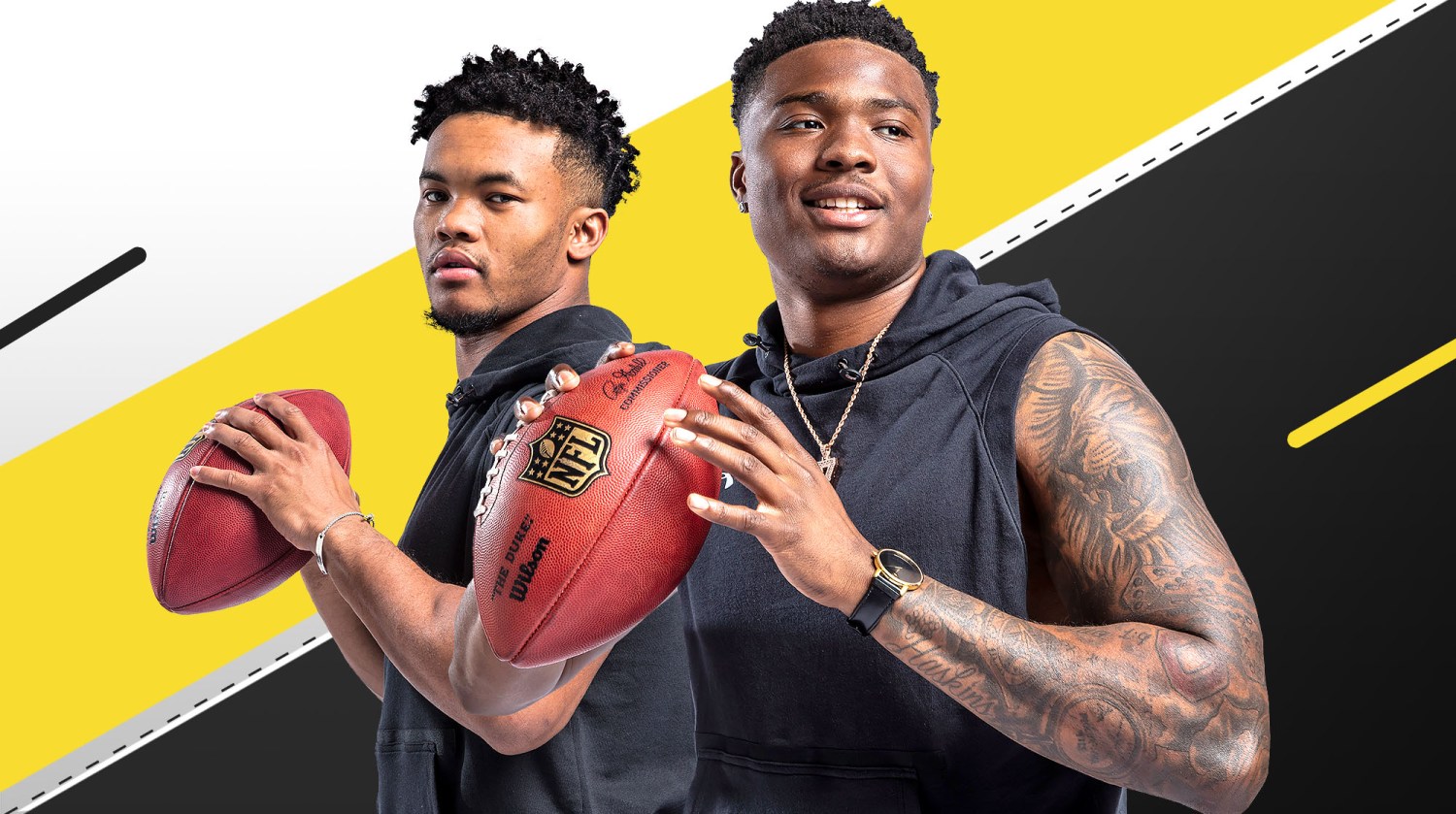 Quarterbacks Kyler Murray (L) and Dwayne Haskins (R) are expected to be picked early in the 2019 NFL Draft. The Undefeated Illustration
Commentary

Has the NFL draft finally become a level playing field for black quarterbacks?

There’s a buzz about Kyler Murray and Dwayne Haskins entering the NFL draft. Both are strong-armed, accurate quarterbacks coming off prolific performances in college, and nothing stirs excitement in a quarterback-driven league like the anticipation of new talent coming in at the position.

But Murray and Haskins also have something else in common that once would have defined them in the draft but, fortunately for the league, no longer matters: their skin color.

For much of the NFL’s history, wrongheaded thinking robbed top African American college quarterbacks of the opportunity to be drafted. But that wall has been toppled. With enormous pressure on football executives and head coaches to win, green truly is the primary color that drives decision-making in today’s draft, according to team officials, coaches, and current and former players interviewed by The Undefeated. It wouldn’t be surprising if both Murray and Haskins were among the first 10 players selected (two black quarterbacks have gone in the top 10 only once previously in draft history) during the three-day event that kicks off Thursday in Nashville, Tennessee, with Murray widely expected to join the list of African American signal-callers to be picked first overall.

Of course, this is not to suggest that everyone in the NFL is now enlightened on all matters of race. The league’s handling of Colin Kaepernick’s peaceful protests to shine a light on police brutality and systemic oppression reinforced the perception that owners are uncomfortable addressing issues important to many in a workforce that’s nearly 70 percent black. When it comes to the NFL draft, however, and evaluating the players who eventually become the face of the game, pioneer James “Shack” Harris said undeniable progress has been made.

Selected in the eighth round (192nd overall) of the joint 1969 NFL/AFL draft by the Buffalo Bills, Harris was the first black quarterback to start a season opener as well as the first to start and win an NFL playoff game. In 1974, Harris was selected to the Pro Bowl. He went on to have a distinguished post-playing career as an NFL player-personnel executive before retiring in 2015. Over Harris’ 46 years in the league, one of the most significant developments was the sea change that occurred with black quarterbacks and the draft.

“It used to be that teams would not consider drafting us at all, and you knew you would have to change positions if you wanted to [play in the NFL],” Harris said recently. “But when some of us did get a few chances, and we showed what we could do, slowly you saw change. And with it as competitive as it is now and the money involved, teams can’t afford to pass on any talented quarterbacks. That’s what you’ve really seen recently.”

In the draft’s 82-year history, only 20 African American quarterbacks have been selected in the first round, and none were until Doug Williams finally broke down the door in 1978. But eight have been chosen since 2011, including one in every draft except 2016, and two were picked in 2017. During the 1999 draft, in which three black passers were picked, Donovan McNabb and Akili Smith were the second and third overall picks, respectively.

If Murray, the Heisman Trophy winner from Oklahoma who chose football over baseball, is selected first overall by the Arizona Cardinals, as most draft analysts predict, he would become the fifth African American at the position to ascend to that spot — all since 2001. Michael Vick was the first to hold the distinction. Vick was followed by JaMarcus Russell (2007), Cam Newton (2011) and Jameis Winston (2015). Not only is Murray eager to join the club, he expects to be next.

“I feel like I’m the most impactful guy on the field,” Murray said in March at the NFL scouting combine. “I’m the best player on the field at all times.”

From all indications, the Cardinals agree.

The widespread belief throughout the league is that the Cardinals, who hold the first pick, will take Murray despite the fact that they selected quarterback Josh Rosen 10th overall in last year’s draft. Even if the Cardinals trade the pick, the prevailing sentiment is that the team that moves up will do so to draft Murray.

Hall of Famer Warren Moon said the very act of clubs maneuvering into position to draft black quarterbacks is another sign of how things have dramatically shifted over the past 20 years.

Moon went undrafted out of college. He received an opportunity to play quarterback in the NFL only after obliterating passing records and winning multiple championships in the Canadian Football League.

“What we’ve been seeing, especially with so many guys being picked over the last 10 years, shows how far we’ve come,” Moon said. “We’re now coveted in the draft, which, obviously, wasn’t the way it used to be not too long ago.” 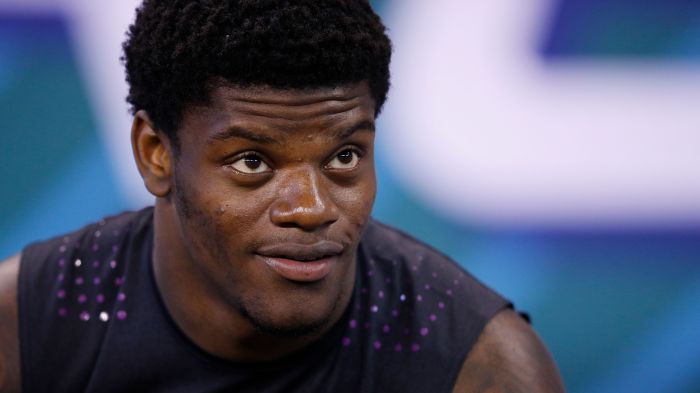 Last season, the Baltimore Ravens, after already having picked in the first round, acquired a second first-rounder to take former Louisville quarterback Lamar Jackson, the 2016 Heisman Trophy winner, 32nd overall. As a rookie, Jackson ignited a late-season turnaround, going 6-1 as a starter down the stretch to help the Ravens win the AFC North title. In the 2017 draft, the Kansas City Chiefs traded up in the first round from 27th to 10th to select Patrick Mahomes from Texas Tech. As a first-year starter, Mahomes was named The Associated Press’ 2018 NFL MVP. Back in 2012, the Washington Redskins made one of the biggest trades in league history to move up and select Robert Griffin III, a Heisman Trophy winner from Baylor. The Redskins sent four high-round picks to the then-St. Louis Rams for the second overall pick. Griffin went on to win the 2012 AP Offensive Rookie of the Year award.

That’s what Moon is talking about.

“It’s one thing for teams to pick guys from wherever they’re picking. But as a team, if you make the effort to trade up and get someone, it’s because you think they’re a difference-maker. That shows we’re highly coveted,” said the only African American quarterback to have a bronze bust in Canton, Ohio.

“It shows teams have their eyes set on guys because they’re looking at the right things. It’s like with this Kyler Murray kid. If Arizona doesn’t take him, it wouldn’t surprise you if someone else moved up to get him. It’s just where we are now.”

Although Haskins isn’t as highly ranked as Murray on most draft boards, he’s up there too. Unlike Murray, a dynamic athlete who lacks the height (he was measured at a little over 5 feet, 10 inches at the combine) of a prototypical NFL signal-caller, Haskins (6 feet, 3 inches, 231 pounds) has the look of someone who was born to play in the pocket. That’s also where the former Ohio State standout does his best work.

“I can maneuver if I need to, but I’m deadly in the pocket,” Haskins said during the combine. “Personally, as a quarterback, I think you have to be a distributor. I find ways to get the ball to everybody. Me in the pocket is more fun for me than trying to run for a touchdown or me running for a first down. I like to see guys make plays.”

The fact that Murray and Haskins are diametrically different in their styles of play yet are both highly regarded pleases trailblazer Marlin Briscoe, who as a rookie with the Denver Broncos in 1968 became the old AFL’s first starting black quarterback. Unlike in Briscoe’s day, “the NFL looks at them as individuals — not black quarterbacks,” said Briscoe, who reinvented himself as a Pro Bowl wide receiver after racism ended his career as a passer.

“A lot of times, even after I came along and other guys after me, they [NFL decision-makers] would always lump us all in together. So if one guy was struggling, they’d say, ‘See? They can’t play.’ Obviously, that was unfair. White [quarterbacks] weren’t judged on what other white quarterbacks did. That’s a big difference now. But to understand how big it is, you really have to understand the history.”

For black quarterbacks, it’s a painful one.

Historically, African Americans were blocked from playing quarterback in the NFL because they supposedly lacked the intellect, heart and leadership skills to thrive at the game’s marquee position. Years after becoming the first black quarterback to be drafted in the opening round, Williams took a sledgehammer to the racist myth with his record-setting performance in a Redskins Super Bowl victory. Now Washington’s senior vice president of player personnel, Williams is especially pleased that the NFL has undergone a transformative shift in thinking about black quarterbacks and the draft.

On the other hand, Williams acknowledges that there’s still coded language used about black quarterback prospects, which usually increases in frequency during the run-up to the draft.

“Yeah, there’s still that talk. But that talk mostly comes from the media,” Williams said. “You hear it on TV, the radio, through social media — but you don’t see [NFL officials] coming out saying those things, and you don’t hear those things in draft rooms. It really is the outside voices, these so-called gurus on TV with their mock drafts. And their opinions, a lot of times, are not based on anything to do with what the teams actually think.

“Now, don’t get me wrong. Some of them may have people from teams calling them and giving them a little of what they think. Some of them tell them some stuff. And you might have some guys in these draft rooms who may not like a guy because of his skin color and who he is. But what I’m saying, based on being in the room, is that the people who make the final decisions, whose jobs are tied to getting the best players to help their teams win, truly take color out of it. And that’s the type of change we need.”