SWAC, MEAC begin practices for February start but will ‘shut it down’ if virus impacts teams

The 2020 fall seasons that were officially postponed last summer by the COVID-19 pandemic – after spring practices were abruptly shut down in March when the virus hit the country full force – resume next month for a spring season that is unprecedented on nearly every level for historically Black colleges and universities (HBCUs).

And they begin with the same caveat applied to the start of basketball season in November, a leap of faith in the safety protocols and in the ultimate mission of the schools to keep its students, campus and community safe.

“COVID-19 is going to dictate what we do,” SWAC commissioner Charles McClelland said last week. Added MEAC commissioner Dennis Thomas, “At any point we feel that it’s not [safe], we will shut it down.’’

Now, some six weeks before both leagues begin play on Feb. 20, everything is on course, including the protocols for practicing and gathering required by the NCAA for controlling the spread. The leagues began practices last week. They are proceeding with preseason workouts and, eventually, games, even with the knowledge that the current wave of infections nationwide is larger than the last, and that another likely larger wave is on track for the early stages of the football season.

The projections were daunting enough to convince the Central Intercollegiate Athletic Association and the Southern Intercollegiate Athletic Conference to cancel football. The SWAC and MEAC chose to plan for the spring and stay ready to change direction if conditions dictated. Both commissioners described themselves today as “cautiously optimistic.”

They are also armed with knowledge of, among other factors, their own frequently-disrupted basketball seasons, and the fall football seasons just completed by the Power 5 conferences.

“We have learned from our prior experience,” Thomas said, “in March and April, through the summer and up to now. The nation has learned more from this pandemic, even about testing. You have a vaccine now. All these things have come online that will make the spike more manageable.”

McClelland pointed out what the leagues and institutions have learned from watching the last several months, and from what they’ve gleaned from NCAA medical advisers. The SWAC worked closely with Dr. Brian Hainline, the staff liaison for the NCAA’s COVID-19 medical advisory group, to be sure they were safe to play.

“Meeting, eating and greeting,” McClelland said in summarizing the areas that needed the most attention to keep the players, coaches and surrounding personnel safe. How and where the football participants have meals, hold meetings and otherwise gather are strictly monitored; other restrictions, he said, include mask requirements off the field at practice and games, and no postgame handshakes between teams.

“At any point we feel that it’s not [safe], we will shut it down.’’ – MEAC commissioner Dennis Thomas

With that, McClelland said, “We understand very clearly that we have to be nimble. We are prepared to adjust and move quickly.”

For both conferences, that includes being able to adapt when outbreaks or contact tracing happens, as they have in basketball, at their level and in the Power 5 conferences. The SWAC has a six-game schedule with a bye week built into the season and another one before the league championship game in May.

The MEAC schedule was reduced to four games for each team after two programs (Florida A&M and Bethune-Cookman) canceled their football seasons due to the pandemic. But the league has flexibility to reschedule and make up games before its conference title game in April.

The MEAC title game in itself adds to the unique nature of the season: With the Celebration Bowl a casualty of the pandemic this academic year, the league was granted an automatic bid to the NCAA’s delayed playoffs this spring and will play a championship game for the first time to determine its bid.

In both leagues, as they did in basketball, the football schedules were designed to reduce travel, hotel stays, flights and other factors that are known to accelerate the infection rate. 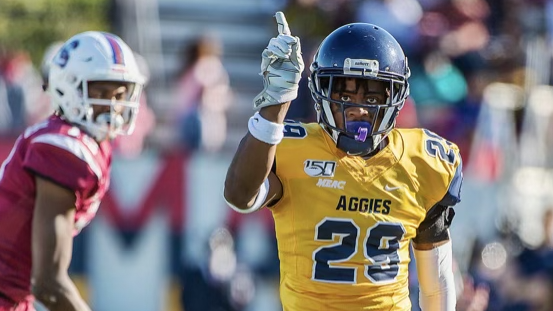 In all, 12 FCS conferences shifted to the spring, and 11 (not including the SWAC, which will cap its season with its championship game) will get automatic bids to the reduced 16-team field. The Ohio Valley Conference is included, and member Tennessee State will play a seven-game season this spring. The Big South will also play a spring season, but Hampton chose to cancel football for the year.

Other FCS conferences playing this spring are the Big Sky, Big South, Colonial, Missouri Valley, Northeast, Ohio Valley, Patriot League, Pioneer, Southern and Southland. A 16-team FCS playoff field will be selected on April 18, the day after the MEAC title game. The SWAC will continue its usual plan of not going to FCS playoffs because of the Celebration Bowl and play its championship game on May 1.

The regular season opens for the MEAC on Feb. 20 with North Carolina Central at South Carolina State, Norfolk State at Howard and Delaware State at Morgan playing. North Carolina State A&T plays its opener the following week at home against S.C. State. SWAC opens on Feb. 21 with Edward Waters at Jackson State. Full league play begins the next weekend with Southern at Alabama State on Feb. 26, then the other four games on Feb. 27.

The remaining HBCU programs themselves are now adjusting to the drastic change in their routines; instead of preparing for the upcoming fall season, they’re about to play games that count.

“It has been weird not being able to play this fall. Your body clock will kind of tell you you’re supposed to be playing,” said Alabama A&M quarterback Aqeel Glass. “It’s been hard, but it’s been a nice challenge – just trying to keep all the guys motivated, keep all the guys ready to play, making them understand that this is the season.

“It’s not spring ball like it normally is. This is a real season; we’re competing for real championships, real records, real stats, all of that.”

The coaches, meanwhile, took on the task of ushering their players through an even harsher realization.

The challenge for Alabama State head coach Donald Hill-Eley, he said, was “letting them know that they are not invincible. This thing will carry you out. We had a couple of players who tested positive – some who got sick, some didn’t. [For coaches,] it’s now being there for them.

“They say, ‘coach, I tested positive,’ and to them, on the other end of the phone it sounds like they got a death sentence.”

“We have not seen anybody that has indicated that they will not have fans. But this is all fluid.’’ – SWAC commissioner Charles McClelland

That all went on within various programs while direct contact was impossible, and phone calls and Zoom talks were the norm. “You miss the face-to-face, because I’m a personable guy,” said Prairie View A&M head coach Eric Dooley, “but you adjust.”

Part of the adjustment will be the likelihood of playing in front of limited crowds, or no crowds at all, including no bands. The SWAC and MEAC say that local laws will dictate attendance and capacity for football. Several traditional games are on the SWAC schedule, but in various locations and under different circumstances, with attendance to be determined.

“We have not seen anybody that has indicated that they will not have fans,” McClelland said. “But this is all fluid.”

The State Fair Classic in Dallas and the Magic City Classic in Birmingham, Alabama, will not be moved, but the Bayou Classic will be in Shreveport, Louisiana, instead of the Mercedes-Benz Superdome in New Orleans. Tickets are on sale for those games, for now.

“It’s the Bayou Classic. We could play it out back, on the other side of the street and in between the cows,” Southern head coach Dawson Odums said. “But it’s a different time. We’re just happy that we have a place that’s willing to let us play and give us an opportunity to continue to showcase to the world that we have something special, that it is our own.”

It’s another shift from the norm that programs and, so far, players and fans, have willingly made.

“We have to deviate from the brand … and now alter and adjust, so we can provide a safe environment for entertainment,” said Hill-Eley, whose Alabama State team plays Alabama A&M in Montgomery in the Magic City Classic. “Even though those things are our brands, those 60 minutes on the field are all that matters.”

Thus, in late January, HBCU football still expects to play in late February, the endgame of planning that began nearly a year earlier.