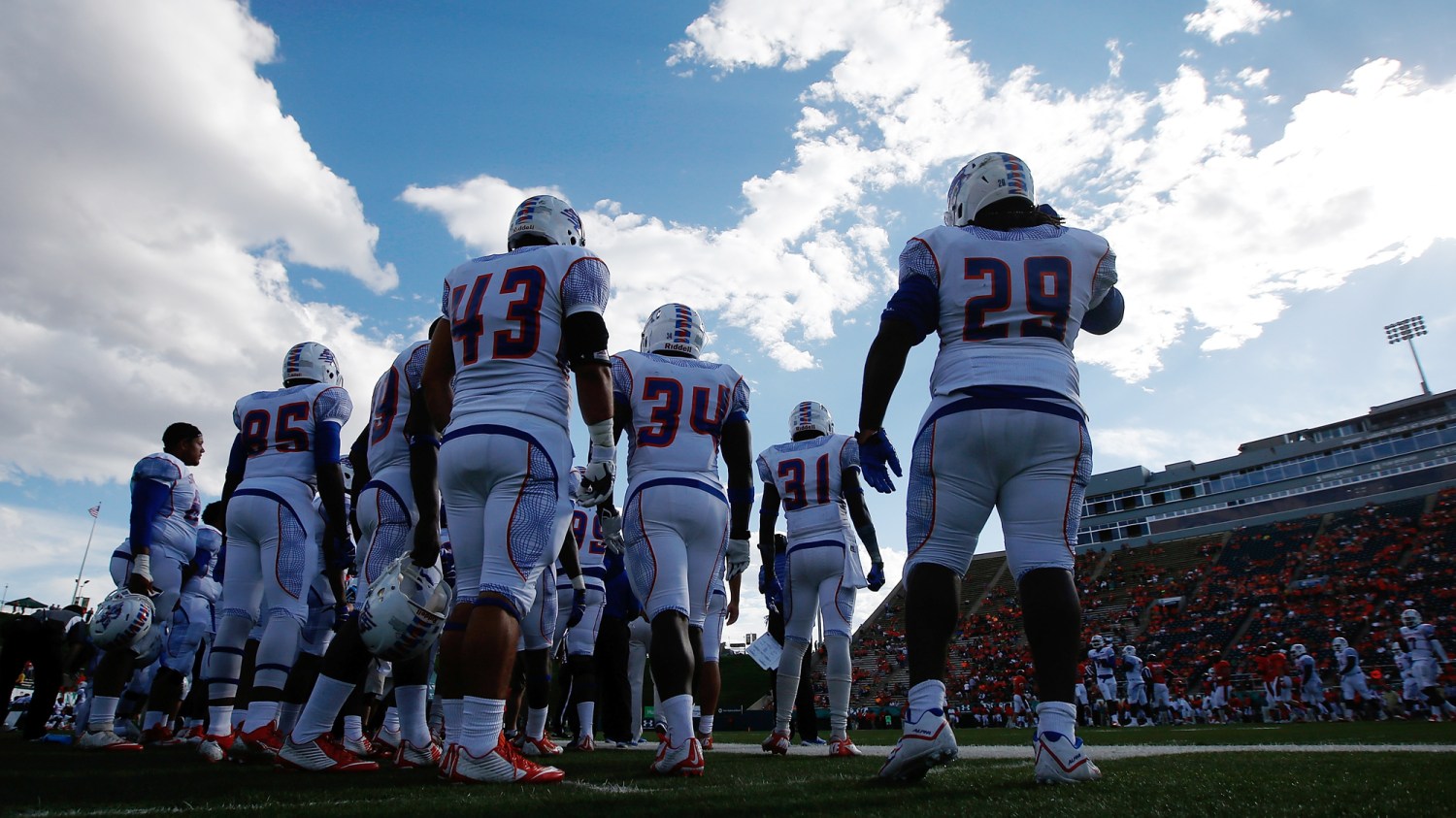 Savannah State Tigers players look on from the bench as they face the Colorado State Rams at Sonny Lubick Field at Hughes Stadium on September 5, 2015 in Fort Collins, Colorado. Doug Pensinger/Getty Images

One of the most hypocritical conundrums in college sports is who is eligible for postseason bowls and playoffs in NCAA Division I sports and who is not.

Five teams will play the regular season knowing they are banned from the postseason for poor academics. All five happen to be historically black colleges and universities (HBCUs): Howard, Morgan State, Florida A&M, Savannah State and Southern.

Across all sports, the NCAA banned 23 men’s and women’s teams from postseason play this year for falling below its requited 930 Academic Progress Rate (APR) score. The score, based on data the colleges supplied over the last four years, is supposed to predict a 50 percent graduation rate based on athletes remaining in school and being academically eligible. The goal of 50 percent was long proposed by the Knight Commission on Intercollegiate Athletics.

Of those 23 teams, 22 belonged to HBCUs. The only exception was the men’s track team of Virginia Military Institute.

The following is no excuse for any dereliction on the part of HBCUs, and for the most part, there has been little public complaint from those schools about the punishments. Four of the banned football teams are from the Mid-Eastern Athletic Conference (MEAC), but Commissioner Dennis Thomas told The Undefeated if HBCUs want to play big-time ball, they have to abide by the rules. Invoking a refrain heard for decades at HBCUs, Thomas said in a telephone interview, “This is not only about having to survive. It’s about how to thrive. We can’t excuse our way out of educating our athletes.”

At Morgan State, athletic director Floyd Kerr told The Baltimore Sun last spring that the football ban (along with men’s cross-country) was “a message to the university that we need to do a better job.” Kerr said the university was redirecting resources to student-athletes.

At Southern, football coach Dawson Odums told The Advocate in Baton Rouge, Louisiana, that his football players “know we can’t worry about things we can’t control, and we focus on what we can work on and doing the maximum we can with that.”

Southern by far had the most teams banned from postseason play — nine — largely because the university chronically supplied data to the NCAA that was unusable. Interim athletic director Roman Banks told The Associated Press, “One thing I want to make clear is the student-athletes are doing their jobs. This has been a problem with the university and making sure we’re doing the right things with compliance and documentation.”

It is hoped that those HBCUs will do the right things and get in compliance. But it seems like HBCUs are forever spinning on a roulette of teams making the grade or flunking. While a school like Hampton University rebounds from a postseason football ban in 2012 to being called a “perfect role model” for other MEAC schools by a local newspaper, Southern gets its postseason eligibility back in basketball this year only to lose eligibility in many other sports.

The NCAA is helping, or is it?

In short, it should reflexively raise a red flag that HBCUs — which play football in the secondary tier of Division I called the Football Championship Subdivision (as compared with the Big 5 power schools and conferences that play in the Football Bowl Subdivision) — provide a convenient whipping post for the NCAA.

Ever since their founding in the seemingly interminable decades of segregation, HBCUs have been underfunded by state governments and, because of America’s history of blunting and blocking black people from wealth accumulation, unable to draw from a broad swath of wealthy alumni and boosters, compared with donors to private, white-dominated institutions and flagship public universities.

The NCAA is somewhat sympathetic to this. It has recognized those historical deficits to some degree by creating the Accelerating Academic Success Program, which gives “resource-limited” schools more time to get their APR up to 930 and provides financial support to help bolster academic support in athletic departments. Schools can receive up to $900,000 over a three-year period.

HBCUs have made up roughly half the 26 institutions that so far have received funding and the NCAA claims strong results, saying the overall APR of HBCUs have shown the fastest increase, from 918 to 956, in the last five years, representing the biggest jump of “any other demographic.”

I’ve tracked graduation rates for 20 years of football and basketball programs at bowl and tournament time, publishing those results in The Boston Globe. When I started, there’d be years where several teams in basketball’s March Madness had a zero graduation rate for black players and most bowl games involved at least one team where the black graduation rate was below 50 percent.

While there has been massive overall improvement over the years, I maintain that the NCAA maintains a blind eye to the most persistent level of academic abuse of black players. These are the schools where predicted overall APRs and long-term Graduation Success Rates (GSR) of at least 50 percent hide hideous disparities between white player rates way above 50 percent and black player rates below the mark.

If the NCAA is going to shame HBCUs with one of its most severe penalties, it ought to also ban postseason play for schools with chronic disparities that are injurious not only to the athletes themselves, but contribute to stereotypes that black players are dumb jocks with only one purpose: to run the ball for presidents, boosters and conference revenue.

Take last year’s FCS championship bracket. North Dakota State has won the last five championships, with a current GSR of 62 percent. That rate is calculated from the actual graduations over the last four freshmen classes where each athlete had six years to graduate.

But an examination of North Dakota State’s GSR shows a white graduation rate of 78 percent, more than double the 36 percent for black players.

Other teams that should not have been allowed to play for the FCS title were:

I have directly asked NCAA President Mark Emmert about sanctions for schools that seem happy to live with such low rates for black players. His response for a 2011 Globe column was, “We don’t subdivide the teams by race or ethnicity or income. We do know when we’ve created and raised those standards, the graduation rates of African-American students have gone up sharply.”

A call and email by The Undefeated to the NCAA to revisit Emmert’s position were not returned. But five years later it is clear that the NCAA refuses to address this issue, both in the FCS and the monster schools of the FBS. Iowa, Michigan State, North Carolina, Texas, California and Southern California are athletic powerhouses where the black GSR ranges from between 43 and 48 percent for black football players and the white rate ranges from 73 to 94 percent.

It is even worse in men’s basketball, where these schools have a 100 percent GSR for white players, but less than 50 percent and as low as 14 percent for black players: Illinois, Michigan State, Oklahoma State, Texas Christian, Washington State, LSU, Mississippi State, Texas A&M, Central Florida, Texas-San Antonio, Ohio, Fresno State, Hawaii and Wyoming. Other national powers under 50 percent for black players include UCLA, Cal, Connecticut and Cincinnati.

When you add it up, it is almost as if HBCUs are being punished for having all-black or mostly black programs, taking on players not coveted by major powers, with far fewer resources to help those from difficult backgrounds to adjust to the dual demands of college and sports. The median spending per football player in the FCS is $42,000.

The HBCUs may deserve their postseason bans. But if the NCAA stops there, that is no different from our last three decades of punishing black drug offenders who are easy to sweep off urban streets, while white offenders party behind picket fences and even if caught, are protected from hard time by privileged access to legal resources.

The only way the NCAA can show it is not imprisoned by that mentality is to crack the same whip on Texas and North Dakota State as it does on Southern and Howard. Any school that has APRs and GSRs below 50 percent for black players should be banned from the postseason. It is easy to punish black schools with no relative resources. Real courage means taking on the modern academic segregation that exists on too many teams in Division I.