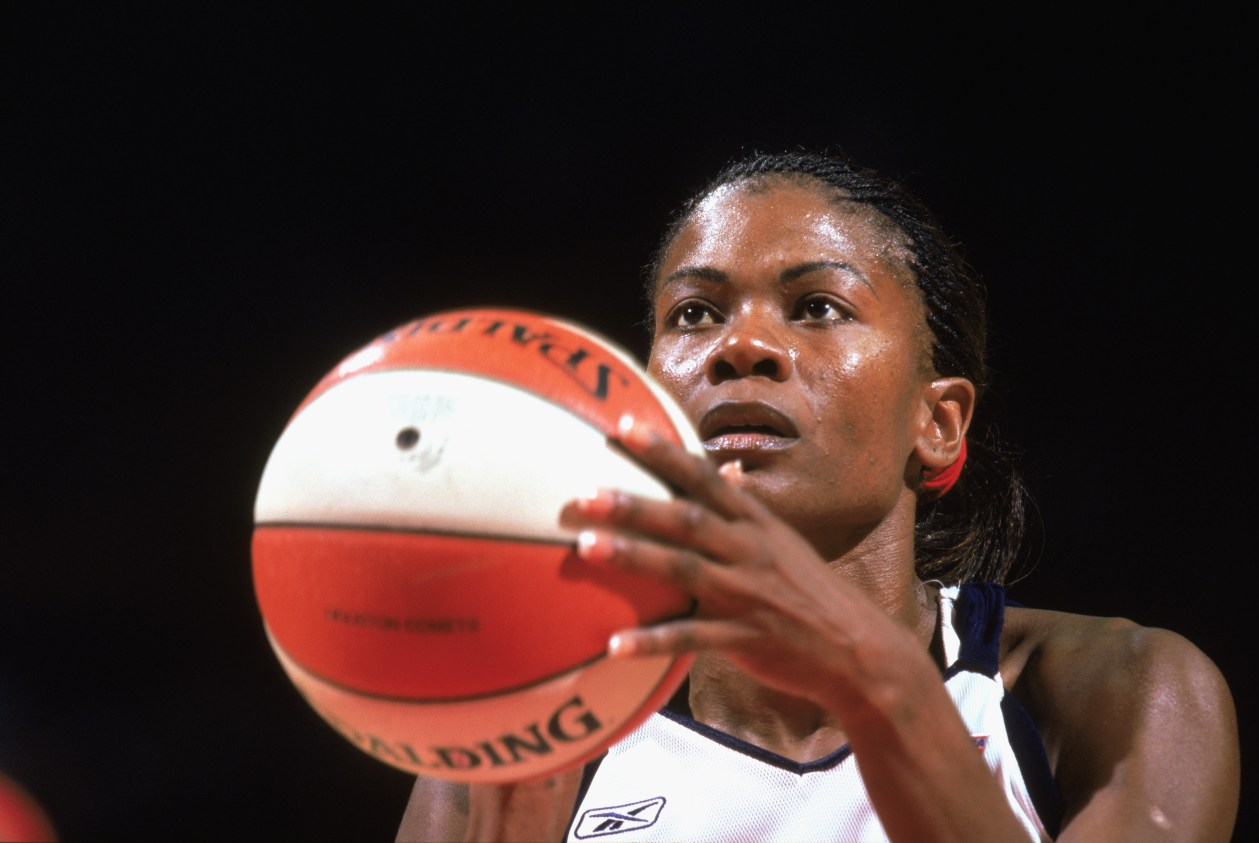 Swoop, there it is! Hall of Fame induction cements Swoopes and her legendary career

If you believe Monica Wright was the woman who got two generations of women into basketball, you were late to the party. The main character in the black romance flick Love & Basketball was a tomboy invested in her hoops. So good, she forced a boy to push her to the blacktop rather than give up the game-winning bucket in front of his friends. So good, she went to star at the University of Southern California, overseas and then in the newly formed Women’s National Basketball Association (WNBA).

Wright might have been some women’s indoctrination into the sport, but the rest of us ballers and shot callers were already three years deep into watching the real-deal basketball legend Sheryl Swoopes.

Nancy Lieberman-Cline, two-time Olympian, basketball Hall of Famer and Sacramento Kings assistant coach who will introduce Swoopes at the Basketball Hall of Fame induction ceremony Friday, told The Washington Post in 1993: “We’re breaking new ground with Sheryl. Women’s sports hasn’t had a team-sport athlete with the star appeal that Sheryl has. She’s young and pretty and articulate. She’s the female Jordan.”

There’s no debate that Swoopes was comparable to His Airness Michael Jordan in athleticism, appeal and clutch gene. Her résumé spoke for itself, but in case that wasn’t enough, His Airness confirmed it. The Baltimore Sun‘s Milton Kent described a story Swoopes told about her playing Jordan in a one-on-one game.

“When we played, he said, ‘A lot of people say you’re the female Michael Jordan. Get out here and show me what you’ve got.’ I said, ‘Michael, I didn’t say that. I had nothing to do with that,’ ” Swoopes said. “The first thing he told me [after the game] was, ‘Girl, you can play.’ He said, ‘I watched you play and you did some things that kind of reminded me of myself.’ I was going, ‘Thank you’ [in a timid voice].”

Swoopes was the very first player signed by the WNBA in 1997. She is still the only player — male or female — to score 47 points in an NCAA championship basketball game. That topped UCLA and NBA great Bill Walton’s 44-point performance, which stood untouched for 20 years. Swoopes did it for Texas Tech in an 84-82 victory over highly favored Ohio State in 1993, leading the Lady Raiders to their first championship.

That same year she won Collegiate Player of the Year, Naismith and Sullivan Awards for amateur athletics and Sportswoman of the Year by the Women’s Sports Foundation. She finished with three Olympic gold medals, two WNBA Defensive Player of the Year awards (2000 and 2002), two more regular-season MVPs (2002 and 2005) and an ESPY award in 2001.

“I never in my wildest dreams thought I would have as many opportunities as I do to go out and do something with my life and actually make money so I can help the people who helped me,” Swoopes explained in The Washington Post article. “Coming from a town of 10,000, it’s really unbelievable. It’s like I’m in a big old dream.”

In two years at Texas Tech, Swoopes dropped 30 or more points in 14 games. In her senior season, she averaged 27.4 points and 9.3 rebounds en route to a 31-3 record that culminated in the national championship. Swoopes scored 53 against Texas in the Southwest Conference final and helped the Lady Raiders take back-to-back SWC championships.

This must’ve been a full-circle moment for Swoopes, who had committed to Texas coming out of high school, but left her full scholarship to return home after only a short period on the campus. The 6-foot guard left Austin, Texas, which was 400 miles from home, and enrolled at South Plains Junior College in Levelland, Texas. This alleviated her homesickness, and only a year after arriving at the campus, she was voted National Junior College Player of the Year. That next season, she transferred to Texas Tech, which with Swoopes’ help broke Texas’ basketball dominance in the state.

“I can’t tell you what Sheryl has meant to this program,” said Swoopes’ coach at Texas Tech, Marsha Sharp to Sports Illustrated‘s Kelli Anderson in 1993. “She’ll be a legend in women’s basketball, but not just because of her play. She has a charisma that the crowd loves. You never doubt that she is a team player.”

Swoopes had this Kanye West, ‘Who gon’ stop me?’ attitude, and it only got more intense as the stakes got higher. In her NCAA Final Four performance against Vanderbilt, she finished with 31 points, 11 rebounds and three steals.

“At times, I get it in my mind that there is no way I can miss,” Swoopes admitted to the Associated Press‘ Chuck Schoffner. “I thought I should personally take control of the game.

“I felt like I needed to score whenever I got [the ball].”

And then there was the pièce de résistance, the crowning moment of her college career. In front of a sold-out Omni Arena in Atlanta, Swoopes lit up the stat sheet: 47 points, with 16 of 24 field goals, four three-pointers and 11-for-11 from the charity stripe.

Love & Basketball had a bigger and more widespread audience, but by the time that movie came out in 2000, Swoopes had already won three WNBA championships with the Houston Comets, an Olympic gold medal, NCAA title and secured the first signature shoe sponsorship for any female athlete. At the end of that same year, Swoopes would add a fourth consecutive WNBA championship to her collection, a WNBA regular season MVP and earn a second gold medal at the 2000 Sydney Games.

Girls are repeatedly told by boys that they can’t and don’t play basketball. Swoopes described that happening with her own brothers.

“At first, they didn’t like playing with me,” she told Earl Gustkey of the Los Angeles Times. “Then when they did, they wouldn’t play hard. But eventually one brother, James, played ball at Murray State. He’s 6-4. He wouldn’t play hard until he saw how good I was getting, when I beat him a couple of times.”

“It helps to play with the guys,” she explained to Gustkey. “They’re so much more physical than girls are. Once you go out and you play with guys, and you get in a situation with girls, you think, ‘Well, if I scored on that guy, I know I can score on her.’ ”

Unlike His Airness, Her Airness didn’t have a professional league in the United States to aspire to coming out of college. She had to go overseas to Italy to continue her playing career, and she’d also have to do it at a fraction of what Jordan and other male ballers were making.

“People say, if you were a male, you would have gone in the [NBA draft] lottery,” Swoopes told The Washington Post. “It’s really frustrating to think about it, to think that men have so many more opportunities than women. Going overseas and staying in the United States, those are just two totally different things. The NBA, you watch it on television all the time, but you don’t hear anything about women playing overseas, unless you know their college coaches and ask them how so and so is doing. It’s sad and frustrating.”

That was one of a few setbacks for the Brownfield, Texas, native. This year, Swoopes was ousted as the women’s basketball coach from Loyola University in Chicago after allegations of mistreatment of players surfaced from former players speaking out. The athletic director in his statement did not reveal what was found in the internal investigation.

In 1996, Nike introduced the Nike “Air Swoopes,” that same year, Swoopes and Team USA won gold in Atlanta and in 1997, the WNBA started play.

All of this set Swoopes up for the greatest comeback of them all. She was a member of one of the most famous basketball trios – Swoopes, Cynthia Cooper and Tina Thompson. She and her Houston Comets teammates gave the WNBA immediate legitimacy and a dynasty to be reckoned with. Generations of young girls are better for having watched her success, and even better from watching how she overcame her tribulations.

And now, Swoopes is floating in midair, rising up one last time as she puts the finishing touches on a performance to attain immortality. So to all the boys who say, “You shoot like a girl,” as an insult, take a look at where that can take you in life? Real recognizes real, bow down to Her Airness.