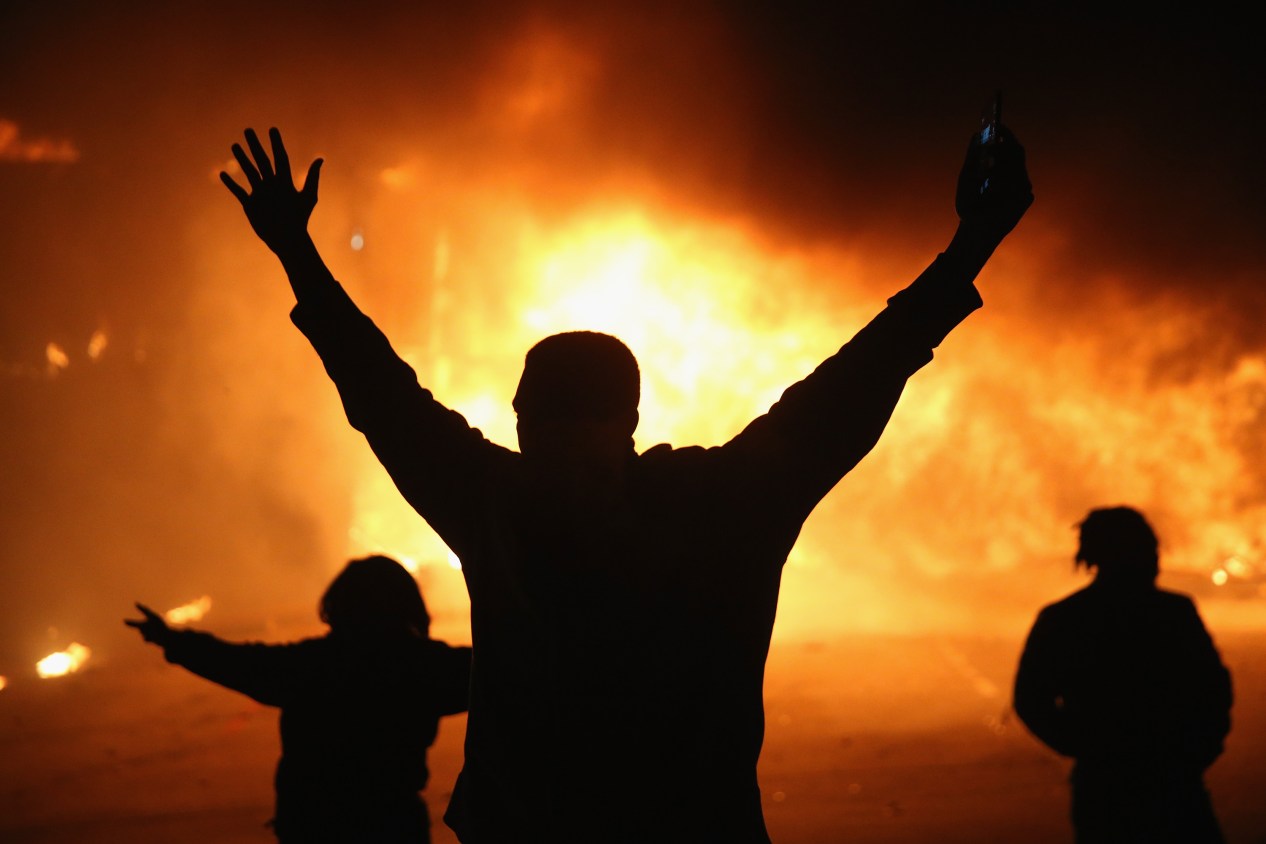 Demonstrators celebrate as a business burns after it was set on fire during rioting following the grand jury announcement in the Michael Brown case on November 24, 2014 in Ferguson, Missouri. Ferguson has been struggling to return to normal after Brown, an 18-year-old black man, was killed by Darren Wilson, a white Ferguson police officer, on August 9. His death has sparked months of sometimes violent protests in Ferguson. A grand jury today declined to indict officer Wilson. (Photo by Scott Olson/Getty Images) Scott Olson/Getty Images
Commentary

Former U.S. ambassador and civil rights leader Andrew Young recently met with officers of Atlanta’s police department, and the takeaway was … not great.

In the course of his meeting, Young, 84, dismissed some Black Lives Matter protesters as “unlovable little brats” and “a bunch of frustrated kids.” Excerpts from the meeting were published by the Associated Press without much context.

The words from the former Atlanta mayor smacked of condescension. On Monday, Georgia NAACP president Francys Johnson issued a statement decrying Young’s statements and suggested that he “go quickly and quietly into a well-deserved retirement” if he didn’t want to use his standing to challenge the status quo of policing in the United States.

“While not discounting Andrew Young’s historical contributions to this nation’s progress,” Johnson wrote, “Mr. Young cannot cloak himself with the memory of Dr. [Martin Luther] King and expect that serious students of the civil rights movement will not call foul on his statements denigrating legitimate protest only to appease his establishment and corporate friends.”

There is a video of the approximately one-hour meeting that took place around a conference table in an officers lounge. Young sits at the head of the table, surrounded almost entirely by black uniformed officers, offering succor.

Young was there to give some words of encouragement and understanding at a time when Black Lives Matter protesters are demanding change to a policing system that has resulted in the killings of unarmed black men such as Alton Sterling and Philando Castile. The theme of his meandering talk seemed to be that the current wave of outrage sweeping the country is unreasonable. At one point, Young minimized the effect of police use of dogs and firehoses on civil rights protesters during the 1960s.

“We were in Birmingham,” Young said. “They put the dogs on us and the firehoses on us. First of all, the dogs didn’t bite anybody. They kept the crowd back. But the other thing was, it was a hot day, and we got wet. But we were dry in 10 minutes.”

Respectfully, that doesn’t make those actions OK. That’s not how those images were interpreted, and it’s certainly not how they were used. Young seems to have lost sight of the fact that regardless of whether the dogs bit or the water dried quickly, going after peaceful protesters with dogs and firehoses was a horrible overreaction.

“Young is acting as a prophet of respectability politics and we’ve moved beyond that religion,” my colleague Lonnae O’Neal remarked.

She’s right. Part of what was prompting Young to turn up his nose at Black Lives Matter is a disagreement over ideology and tactics. Young played a central role in a movement that relied on dignified presentation of self as a tactic for political gain, one that used photographs and video from marches to discredit opponents of civil rights as crazed, violent idealogues.

The people marching alongside Young and Martin Luther King Jr. had to appear rational in the face of weaponized irrationality.

Nearly 50 years later, the carriers of their legacy have had enough. Black Lives Matter is not fighting a battle of political expediency, but in his talk with Atlanta police, Young was ever the politician.

While the tactic Young and King championed may seem anachronistic, it’s still highly effective. Consider the widely disseminated photo taken July 9 of a harmless-looking Ieshia Evans in flats and a sundress, protesting the death of Alton Sterling and facing a group of Baton Rouge, Louisiana, police officers in body armor.

Veronica Marché Jamison, inspired by the photograph, drew an illustration, one in which she centered Evans, imagining the encounter from Evans’ perspective (full disclosure: Jamison is a friend). Jamison’s artistic license captures what just so many young protesters believe they are facing: an armed, unyielding abyss that barely registers them as human.

The viral photograph of Evans feels like Bernie Boston’s Flower Power for the Black Lives Matter age. In it, Evans appears peaceful and calm. Everything about her body language suggests openness. The way her hand is outstretched makes her seem messianic, and her physical presence is dwarfed by the officers surrounding her. It’s a clear, perfect, arresting message that immediately establishes light and dark, good and evil.

Young seems to think that a movement represented by images like the one of Evans will be more effective than one of Ferguson, Missouri, protester Edward Crawford throwing a tear gas canister back at police in 2014. But as a society, we have the bandwidth for more than just one approach for demanding change, for demanding justice for unarmed black people who are killed during police encounters.

Black Lives Matter protesters needn’t be lovable to deserve equal protection under the law. It’s afforded to them as U.S. citizens, whether they’re lovable or not, which is precisely the point they are making.

It’s why Black Lives Matter activist DeRay Mckesson, who was arrested over the weekend in Louisiana, regularly tweets, “I love my blackness. And yours.” It’s an affirmation of self-love, yes, but it’s also an acknowledgement that there isn’t just one way to be black, or more broadly, one way to be a freedom fighter. This is no longer the time for Sunday suits and your best manners, because they don’t protect you from discrimination and they don’t protect you from death. Even Member of the Club author Lawrence Otis Graham figured that out two years ago.

[Police shootings and the Ida B. Wellses of our time]

So when Young characterized some Black Lives Matter protesters as “unlovable little brats,” in front of a video camera, no less, to a group of police officers, even if they were mostly black, it was a barbarous rejection. “They feel like they can show out and clown without any consequences,” Young theorized.

Especially when considering Young’s comments in the wake of the attack on Mother Emmanuel African Methodist Episcopal Church in Charleston, South Carolina, he sounds like someone willfully ignoring the big picture.

Last year, in the midst of a debate over the Confederate flag after a white gunman named Dylann Roof attacked a group of black people at Mother Emmanuel, Young deployed one of the most frustrating straw men that gets trotted out whenever unarmed black people are the victims of racially-motivated violence from whites.

“The problems we face don’t have anything to do with the flag,” Young told Atlanta Fox 5 WAGA-TV. “The fact is that 93 percent of black people killed are killed by other black people. So black lives matter. Let us start believing that we matter.”

This is not pathological – most people, not just black people, tend to be killed by members of their same racial or ethnic group.

But again, it’s rooted in the idea that black people must be better than human to enjoy basic civil rights. It’s a tactic built on illustrating just how perfect we can be, and it stands in opposition to one that allows room for sorrow, messiness, and fury, for all types of blackness. Eventually this superhuman effort to hold it together was going to fall apart, and no one should be faulted for that.

Give black people room to experience the full range of their emotions instead of packaging them in a way that’s considered “presentable.” People have every right to be frustrated and to be angry. No, none of these wounds dealt by injustice are new, but it’s certainly past time for all of them to be old.