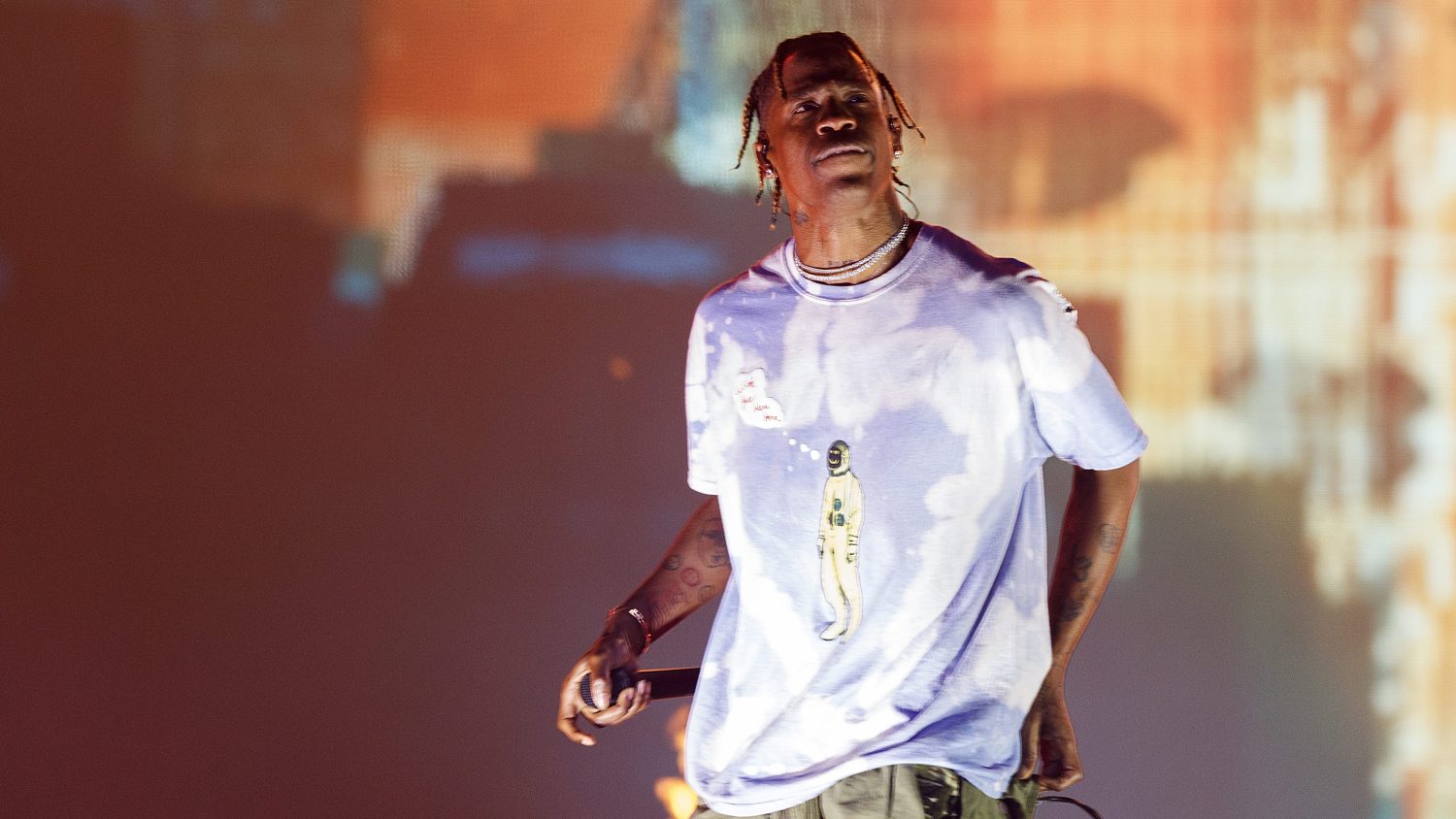 Is Travis Scott’s Super Bowl performance a misstep, a crowning jewel or history repeating itself?

From James Brown to Sammy Davis Jr. and now Travis Scott, the backlash from artists crossing metaphorical picket lines is not new

Travis Scott has a legit case for being music’s 2018 MVP and is already one of its front-runners for the crown in 2019. From hit records of his own to hit features to his own signature Air Jordans to curating the soundtrack (as executive producer) of NBA 2K19, the world’s most popular basketball video game, he impacts culture daily. He’s been interviewed by LeBron James — and performed at James’ wedding anniversary celebration.

To understand the world Scott operates in is to be a willing (or unwilling) participant in the eclectic range of his sound. It’s unhinged, yet harmonious — as with “Oh My Dis Side.” It’s rageful, yet calculated — as with the Grammy-nominated (and unofficial song of 2018) “SICKO MODE” featuring Drake. He can also be Woodstockian, yet current — as with “Pick Up the Phone,” featuring Young Thug and Quavo. This is also the supernova of his Billboard No. 1 pop album Astroworld. The album had the third-best debut week of the year, after Drake and Post Malone.

There was also a massively successful domestic tour. The giant gold Scott heads that captured the world’s attention. The birth of his first child with girlfriend Kylie Jenner. And, most recently, accepting an invite to perform at Super Bowl LIII alongside Maroon 5 (Scott and Maroon are both repped by Irving Azoff’s Full Stop Management) and special guest/native Atlantan Big Boi, of iconic hip-hop duo Outkast. Scott, born in Missouri City, Texas, basks in a green light similar to that of James Harden, another Houston MVP.

“Travis has been huge this year,” David Creech, Jordan Brand’s vice president of design, said of Scott’s crossover appeal. “All of our athletes and entertainers are selected because they represent a certain greatness in their field or craft. … Travis helps authenticate [Jordan Brand] … for today’s generation. It’s been a fun ride.”

Every ride, though, comes with some turbulence. And for the “goosebumps” rapper it comes in the form of the Super Bowl, just a week before he strolls into the 2019 Grammys with three nominations — including one for best rap album. Since it was announced Dec. 20 that Scott would play the Super Bowl, he has been accused of breaking what some had deemed a de facto boycott by black performers of the NFL’s biggest stage.

Scott, born in Missouri City, Texas, basks in a green light similar to that of James Harden, another Houston MVP.

There were immediate reactions from artists such as Freddie Gibbs, Soulja Boy, Meek Mill and Jay-Z. Meek Mill opposed Scott’s decision. Jay-Z reportedly attempted to dissuade Scott from taking on the high-profile gig. And Scott had a public and odd disagreement with exiled quarterback Colin Kaepernick, a champion to many in the rap community in the wake of his kneeling protests during the 2016 NFL season that brought to light issues in the criminal justice system, including police malpractice and brutality. Plus, there hasn’t been a nonwhite Super Bowl main performer since Beyoncé and Bruno Mars in 2016 — Kaepernick’s last professional season.

Scott’s reported conversation with Kaepernick has been characterized by an unnamed source as one of “mutual respect and understanding.” It has also been characterized by NYC’s Hot 97 radio personality Nessa Diab, who is Kaepernick’s girlfriend, as one with “NO mutual respect and … NO understanding.” Scott and the NFL’s agreement to donate $500,000 to the nonprofit Dream Corps, a social justice organization founded by Van Jones in 2014 with an emphasis on economic, prison and environmental reform initiatives, has done little to quell the backlash. Dream Corps is the organization that the Players Coalition supported — the one critics say was founded more to cease peaceful protests than to address issues.

“Being an artist … it’s in my power to inspire,” Scott said in a statement in January. “So before confirming the Super Bowl Halftime performance, I made sure to partner with the NFL on this important donation. I am proud to support Dream Corps and the work they do.”

Big Boi — perhaps because of his status as an architect of rap, perhaps because Scott is the one with the most current cultural momentum — seems immune to critique. Maroon 5’s canceled news conference has also stoked the fires. Speculation immediately ran rampant that some sort of homage to Kaepernick could be in play. Reports say Maroon 5 would prefer that their performance do the talking. Contracts can be signed, but until the performance is over, the NFL is truly at the mercy of the artists. Anything can happen: surprise guests, surprise statements, a marriage proposal from Scott to Jenner, people performing in Kaepernick jerseys — or, more realistically, nothing beyond the music, at all.

In truth, Scott is but the latest of many black celebrities over time to cross a metaphorical picket line. It wasn’t quite football (although NFL owners do “overwhelmingly funnel their political contributions to candidates in the Republican Party”), but James Brown and Sammy Davis Jr. experienced similar forms of backlash in the late 1960s and into the 1970s as they both endorsed and supported Republican President Richard Nixon.

Scott’s time is coming. How he chooses to use it, and how it will be remembered, is up to him.

Brown’s music and presence at the Boston Garden the night after Martin Luther King Jr.’s assassination helped heal a city drenched in uprising and unbridled anger. He endorsed Democrat Hubert H. Humphrey’s bid for the White House later that year. Yet, after Nixon’s victory in 1968, Brown, the “I’m Black and I’m Proud” hero, performed at Nixon’s inauguration. “I accepted,” Brown told Jet in early 1969,” because I want to give our new President a chance to bring the people of this nation together in every aspect of our national life.”

Team Nixon understood the power of black celebrity to temporarily camouflage policies and tactics detrimental to black communities. Nixon played Wilt Chamberlain like a fiddle. Jackie Robinson helped Nixon campaign in a failed 1960 bid for president, a decision that caused Malcolm X to wage a public war of words with the baseball icon up until his death in 1965.

When it came time for Nixon to run for re-election, Brown was again there even as Nixon’s “black capitalism” stance all but crippled calls for resistance. “I’m endorsing President Nixon,” Brown said, “because I believe the future of the country lies with President Nixon. … Some of the things he’s done has been very close to my heart, as a minority.” By then, Soul Brother No. 1’s association with Nixon had come to affect his own career. Democrats weren’t the only ones infuriated by Brown. His record sales and touring income dwindled.

By the time of Nixon’s second inauguration, Brown was a no-show. A year later, with Watergate the American story of its time, Brown’s stance changed. 1973’s “You Can Have Watergate Just Gimme Some Bucks and I’ll Be Straight” and 1974’s “Funky President (People It’s Bad)” revealed a political evolution in Brown — or at least a weariness of the backlash from his own community.

And then there was Sammy Davis Jr. Around the same time of Brown’s “You Can Have Watergate,” Davis was looking to dissociate himself from Nixon as well. Many black and white celebrities such as Eartha Kitt, Steve McQueen, Dick Gregory and Jane Fonda loathed Davis’ support of Nixon. But what truly damaged the Rat Pack legend was a single picture of Davis enthusiastically embracing Nixon at a youth rally in 1972. Davis, like Brown, believed Nixon’s policies were good for blacks. But Davis, unlike Brown, had a longer, more storied and more emotionally intertwined relationship with Nixon. They played on each other’s insecurities and used the other’s platforms. Hate mail poured in. There are stories of black people refusing to even look at Davis on elevators.

By the time Davis stood onstage with the Rev. Jesse Jackson in Chicago in 1973 for an Operation PUSH anti-poverty event, the backlash was in full roar. Davis’ team reportedly donated $25,000 and awaited Jackson’s public endorsement — only it didn’t work. The Windy City crowd pelted Davis with boos as he began his trademark “I’ve Gotta Be Me.” Davis finished the song, left the event, got drunk and cried himself to sleep. By the late ’70s, Davis endorsed Democrat Ted Kennedy for president.

Scott’s halftime performance on Sunday won’t elicit the same kind of backlash. Although the NFL wields decent amounts of mainstream cultural power in American life, it is fair to say Brown’s and Davis’ decisions directly affected more lives than Scott’s performance will. It’s most likely that Scott’s “Wish You Were Here” tour will continue to be one of the most sought-after tickets. His Rolling Loud festival performance is already being anticipated as an early summer highlight. And it’s hard to imagine how Scott doesn’t walk away with at least one Grammy next month, given the vise-grip “SICKO MODE” had on the charts for the last half of 2018. Scott’s music is a requirement on Super Bowl weekend playlists in Atlanta everywhere from the most exclusive invite-only parties to Blue Flame and Magic City.

Regardless of how Scott’s actual halftime set goes, though, 2019 will be a history-altering year for the NFL. Kaepernick’s collusion case is expected to be heard sometime this year and is the most important sports-related legal case since baseball player Curt Flood’s lawsuit brought free agency. The sentiment, nearly unanimous in the world of black music, is that Kaepernick has been blackballed for his protests of systemic injustices devouring black communities. NFL players reflect this sentiment too. A recent poll conducted by The Athletic showed that more than 95 percent of defensive players surveyed believe Kaepernick should be on an NFL roster.

Scott will see the customary Super Bowl spike in YouTube views and streams. But with the benefits comes the parallel reality of his association with the NFL at this point in history. The cost of being one of the world’s most recognizable stars is that sometimes stuff is bigger than just you. Scott’s definitive year coincides with the NFL’s chickens coming home to roost.

Is he comfortable with that alignment? Will Scott, along with Maroon 5 and Big Boi, use the worldwide platform to build an indelible memory? And is Scott prepared for how that asterisk, similar to Brown’s and Davis’ political asterisks, could affect him even as his professional career reaches new heights? On Sunday, Astroworld crash-lands in Atlanta — fittingly, the mecca of rap for at least the past 15 years. But there comes a point in time when worlds temporarily stop on their axes. Scott’s time is coming. How he chooses to use it, and how it will be remembered, is up to him.