‘Translate This’ is the result of studying the comedy greats

Actor and comedian Felipe Esparza describes himself as raw with a real comic sensibility. His new HBO special, Felipe Esparza: Translate This, airing Saturday during Hispanic Heritage Month, captures today’s climate for Latinos in America, and it’s delivered in a manner that would make the most unassuming person laugh.

There are no real pauses in a conversation with the comedian, because he takes any available second to insert an anecdote that rings so true that you have to say, “I almost thought you were serious.”

Esparza finds humor in his life experiences, discussing topics such as immigration, his difficulty translating for his parents, being a once-not-so-great single dad while dating single moms, his current challenges in raising his blond-haired, blue-eyed stepson, and more. He knows his past was part of his journey that would lead him to this point, where he is able to share his story in a way that fills hearts with laughter.

The winner of Last Comic Standing in 2010, Esparza has appeared on numerous TV shows, including Superstore, The Tonight Show, Lopez Tonight, Premium Blend, The Eric Andre Show, Comic View and Galavisión’s Que Locos, where he made more appearances than any other comedian. His film credits include The Deported and I’m Not Like That No More, a feature based on his stand-up comedy, as well as his first stand-up special, They’re Not Gonna Laugh at You. Esparza is also the host of the What’s Up Fool? podcast that he launched in 2014.

Just ahead of his HBO special, he spoke to The Undefeated.

How did your project with HBO come to fruition?

I’ve always wanted to be a comedian and I’ve always wanted an HBO special because I saw Paul Rodriguez, George Carlin, Robin Williams, Howie Mandel — you know, all the greats — and I thought, like, I need to be one of those guys on HBO so I could be considered one day a great, or somebody to say, ‘Oh, man, he’s a great comedian.’ The verification of being on HBO, because HBO is part of my generation. The comedians before me wanted to be on Johnny Carson, you know? They wanted to be on The Tonight Show, and the people would be on The Tonight Show, then they’d be a little famous and that’s it. My dream was to be on HBO. I did my special with my wife. We produced it ourselves, and once HBO found out about me doing my own special, they got 100 percent behind it, and they wanted to show it on HBO, so we’re very happy about that.

Why did you decide to infuse your upbringing into your comedy?

When did you know you wanted to be a comedian?

When I was a little boy, my friends played an album of Bill Cosby, and I fell in love with Bill Cosby stand-up comedy, and I wanted to be a comedian right there and then.

How did you overcome your addiction?

Along the way, I got into a lot of trouble. I was in a gang. I was into drugs, and I got into a lot of trouble and Father Greg Boyle from Humble Industries, he came to my house and he offered to help me, and he put me in a rehab for drug addicts for drug rehabilitation. I was there with a bunch of men. It was more like it was open for all religions, they were, like, nondenominational.

It was funny because on Sundays we would all go to different churches. Then at dinnertime, we would all be together again, a lot of drug addicts. It’s like, heroin addicts, I mean, people who just came out of prison, people who were out of prison from doing 20 years, and these are young men. Me, I was in my 20s, hanging around with these old guys. I’ve never been in prison. I’ve never been in jail. The only crime I committed was bringing videos back late.

He said, ‘Hey, guys, write down five things you want to do in your life and accomplish.’ I didn’t know what to write, so I wrote I want to be a comedian No. 1, of course, because that was my dream. No. 2, I like Olive Garden, so I want to go to Italy. No. 3 was to be happy. Four and five, I couldn’t think of anything else. I really thought that he was going to read these in front of everybody and judge us, but he didn’t. I just put it in my pocket and he said to bring it out whenever you’re feeling sad, or feeling down, or you have a lot to do, pick up your five goals and try to see if you can do at least one. I chose the easier one, to be a comedian, because I wanted to be a comedian.

How did you get started?

Back then there was no social media, so I had to do everything like a caveman. I had to go to the library. Remember the library? That place with books. I went to the L.A. County library on Fifth and Grant in downtown L.A. It’s huge! I went there when it opened, and I asked the librarian to help me find books on comedy writing. She introduced me to a lot of comedy writers, people I never heard of, like Steve Allen. I started learning from those guys, and then I started like checking out books of comedians like George Carlin, Richard Pryor, and checking out those videos and taking them home and watching them and bringing them back and picking up another one. One day I picked up a magazine called the L.A. Weekly, and it said open mic for young comedians, and I went over there and I did my comedy show. One of the first comedians I met was Jamie Kennedy, and then from knowing him, I started to know other spots to perform. I met other comedians.

What were your reservations about getting into comedy?

At that time I was worried, like … are only Latino people gonna laugh at my jokes? I was only performing in coffeehouses. Then I went to like other places, but mostly like, Latino people were gravitating to me. They were really laughing.

What was the best piece of advice you’ve received?

I asked Paul Rodriguez, ‘How did you cross over to mainstream America?’ Then we started talking about mainstream America and crossing over and being funny. He said, ‘If you’re funny enough, you don’t have to worry about that stuff. They’re going to cross over to you.’ So I took that with a grain of salt and I stuck to it, and here we are, Sept. 30, HBO special. That kind of advice helped me out a lot.

How do you feel about where you are in your life?

What’s been the hardest part of your journey? 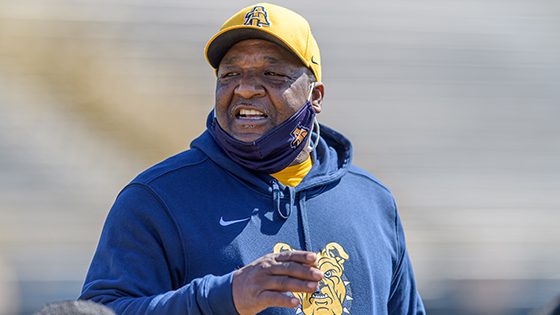 N.C. A&T and Hampton look forward to facing each other as Big South competitors Read now

The hardest part of my journey, in my opinion, is staying focused, because as comedians, we have a lot of time to kill. Like right now, if I wasn’t doing this interview with you, I don’t know what I would do. I would probably play Madden for the next four hours. A lot of comedians, they fall off the track. They start worrying about, ‘I’m not famous yet. I don’t have enough followers on Twitter; 12 people showed up to my show. My girlfriend showed up, my ex-girlfriend showed up with her new boyfriend and sat in the first row when I was performing.’ So much stuff goes through my head to be a better comedian.

What advice would you give to other comedians?

My advice to anybody who wants to be a comedian is if you really want to make it in this business, start your family at 39 years old, because this is a very selfish business. This business is all about me, you know? Staying focused and writing every day is one of the main things that I’ve done. I try to force myself to write at least one sentence every day, whether it’s funny or not.