Rockets guard Eric Gordon: ‘This is going to be different’

HOUSTON — The only thing that could be heard was the slow tap of sneakers as the Houston Rockets headed to the locker room. James Harden may be the likely NBA MVP, but even his head was down after being blown out by the Golden State Warriors 119-106 in Game 1 of the Western Conference finals on Monday night.

With home-court advantage lost, Harden, Chris Paul and the top-seeded Rockets face unfamiliar adversity as their heart and title ability are suddenly challenged.

Merriam-Webster defines adversity as “a state or instance of serious or continued difficulty or misfortune.” There has not been much adversity for the Rockets this season other than injuries they have overcome. Perhaps this could be to Houston’s detriment now.

The Rockets won a franchise-record and NBA season-best 65 games and enjoyed three 11-game winning streaks. Houston’s Big Three of Harden, Paul and Clint Capela were 42-3 together in the regular season. The Rockets nailed an NBA-record 1,256 3-pointers, and 50.2 percent of their shots were treys. Their improved defense was middle of the pack in the NBA. But Houston averaged a league-best point differential of 8.5 points per game and a 50-8 mark when holding foes under 110 points.

Even with Paul out for 24 games in his first season with the Rockets because of injury, they still won 15 times. There were rotation changes, but Houston kept winning. Harden joined NBA legend Michael Jordan as the only NBA players to average at least 30 points, 8 assists, 5 rebounds and 1.7 steals in a season. And the Rockets won the regular-season series against the reigning NBA champion Warriors 2-1, including a Feb. 20 win after which Capela said they were the better team.

Adversity? The other NBA teams would roll their eyes at the Rockets if they complained about adversity this season.

The Warriors walked into the Toyota Center more focused than they had been all season, according to their coach, Steve Kerr. Forget the regular season. The Warriors are playing for another trophy.

While Golden State didn’t bite back verbally, the players had to be quietly brewing about the Rockets thumping their chests after the Jan. 20 win. Golden State entered Game 1 as unfamiliar underdogs. And the Warriors opened a playoff series on the road for the first time since Kerr’s first season as coach in 2015.

Even so, Rockets coach Mike D’Antoni said his team was actually the underdog before Game 1. Perhaps D’Antoni had sensed something, as the Warriors earned a statement win by scoring 63 points in the second half while committing nine turnovers overall. Kevin Durant was unstoppable, scoring 37 points, while fellow NBA All-Star teammate Klay Thompson added 28. The running Rockets were limited to three fast-break points on 1-of-6 shooting, shot 45.9 percent from the field and missed several layups.

“They did a really good job,” Harden said. “If you miss the shots or if you turn the basketball over, they’re out. They’re getting dunks, they’re getting 3s. I’m not sure how many transition points they had, but it was too many. That’s what they thrive on, so we’ve got to do a better job of not turning the basketball over, taking better shots, and getting back and matching up.

“There were a couple times where we didn’t guard anybody and they got a dunk or an open 3. That can’t happen.”

Said D’Antoni: “Well, they’re really good. You’re not going to come in and just knock them out.”

Harden and Paul had a game-high 41 and 23 points, respectively. Many of those shots, however, came off isolation plays instead of running the offense to find an open man and better shot. Gordon, who had 15 points and three 3-pointers, believes the Rockets must pass more to be successful against the Warriors. The Warriors played masterful defense in Game 1, in which they challenged Rockets 3-pointers with length, limited them to 13 made 3-pointers and scored 17 points off turnovers.

“I definitely would like to get the ball more for me to be aggressive and get good looks,” said Gordon, who took 13 shots. “Offensively with everybody, we really don’t get real good looks. … We can’t isolate as much against a good defensive team. I don’t care who you are. We have some of the best isolation players out there. But against a team like that, it’s going to be too tough.” 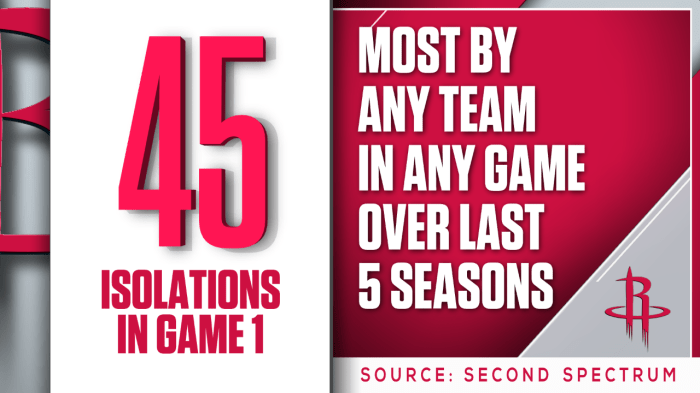 After the game, Rockets forward Luc Mbah a Moute had ice on his previously dislocated right shoulder. The defensive specialist suffered the injury on April 10 against the Los Angeles Lakers and missed the first round of the postseason. Mbah a Moute averaged 7.5 points off the bench in the regular season but averaged just four points on 33.3 percent shooting in the second-round series against the Utah Jazz and went scoreless against Golden State in Game 1. If the Cameroon native were healthy, he certainly could be a defensive factor.

“I’m still trying to get my rhythm,” Mbah a Moute said. “It’s been a month and a half since I got hurt. It’s been tough. It’s unfortunate, the timing of it. But I will find a way.”

The problem is the Warriors can actually play better too. The Hampton 5 lineup of Durant, Thompson, Curry, Draymond Green and Andre Iguodala got off to a slow start, as they were down 30-29 in the first quarter. Curry, who had 18 points and one 3-pointer in Game 1, hasn’t had a trademark two-time NBA MVP performance since returning in the postseason from a knee injury. Green struggled to score and admitted to being too emotional early on, but he had nine rebounds and nine assists.

“We love to play with pace on offense, but we also want to be a team on the fast break,” Capela said. “We think we are the best, so whenever they score it’s hard to start the offense by walking up the floor. This is not what we do. We need to get our pace to make everybody confident and get our shooters open. Me at the rim. We are really going to have to get some stops and push the ball.”

The Rockets were positive after the stinging defeat. Houston didn’t seem to view Game 2 as a must-win even though a loss would mean arriving at Oracle Arena down 0-2. The Rockets vow that they will learn from film and be their old selves on Wednesday.

Paul even mentioned that the Rockets lost Game 2 in the second round against the Jazz before winning the series 4-1.

“Obviously, it’s a different team and whatnot. But for us, our focus right now is just on Game 2,” Paul said.

Said Rockets forward P.J. Tucker: “Yeah, it’s a lot of games, it’s a lot of basketball to be played. Nobody’s in a panic, we’re a veteran group, we’ve lost in other series. It’s nothing we can’t fix and get ready for Game 2.”

Rockets legend Hakeem Olajuwon seemed concerned about his beloved team as he departed, but he didn’t give up faith either. The two-time NBA champion said, “This is going to be a long series.”

If the legend nicknamed “The Dream” is to be proved correct, the Rockets must start by winning Game 2 against the defending champs. Otherwise, it could be a nightmare of an ending for the championship-eyeing Rockets.

“Now, obviously, we lost,” D’Antoni said. “Now the next most important game is Wednesday. See if we have a short memory. We can’t think about this game other than make adjustments. But we’ve got to come out and win the game on Wednesday, and we’ll see what happens. We can win here, we can win there. It’s nice to have home court. We don’t have it. We’ve got to go get it.”