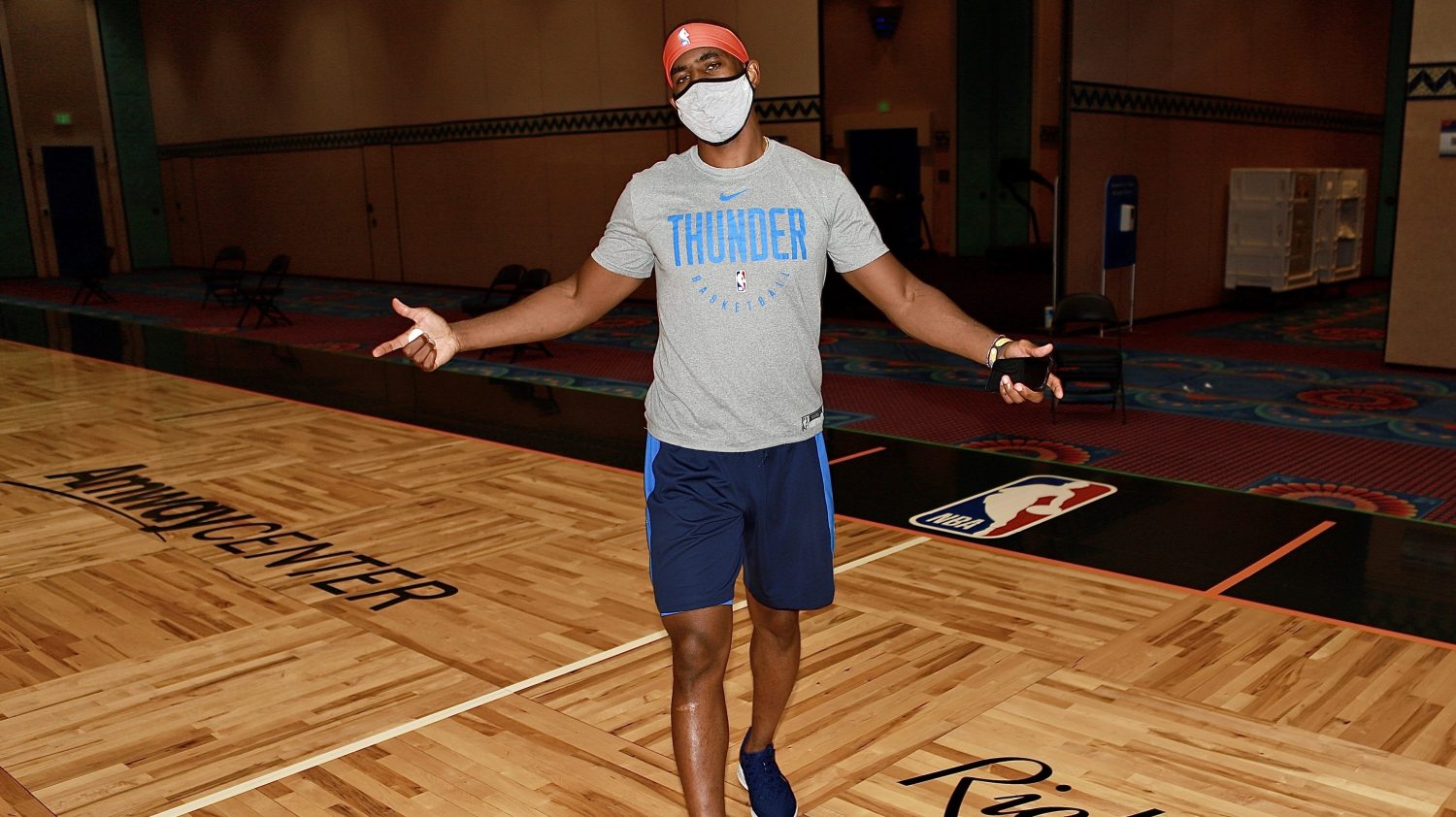 Chris Paul of the Oklahoma City Thunder walks on the court during practice as part of the NBA restart on July 19 in Orlando, Florida. Jim Poorten/NBAE via Getty Images

How Chris Paul ran point during the pandemic

The NBA season is back, thanks in large part to the Thunder’s star guard

LAKE BUENA VISTA, Fla. – When Chris Paul first walked through the doors of the Grand Floridian Resort & Spa in early July, the Oklahoma City Thunder guard paused to reflect on the resumption of the 2019-20 NBA season: the planning, the health concerns, the social justice issues.

As the moment sunk in, Paul, who played a significant role in the restart as president of the National Basketball Players Association (NBPA), got teary-eyed.

“So, to walk in and to see it all in person is humbling. This is just crazy. When I initially got here, I got very emotional, just because it’s a lot of [people] that put in a lot of hours and stuff like that to make this happen.”

The 2019-20 NBA season came to an abrupt halt on March 11 when two Utah Jazz players tested positive for the novel coronavirus during a road game against the Thunder. The pandemic put the sports world at a standstill for months. Then, while the NBA worked toward creating a safe environment to resume play, the death of George Floyd at the hands of Minneapolis police on May 25 sparked protests worldwide. Suddenly, NBA players debated whether resuming their season would risk silencing their voices on matters of social justice.

Paul, in his role with the NBPA, spent hours on phone calls, Zoom meetings, texts and emails addressing concerns from players while continuing to plan the season.

Ultimately, the NBA and NBPA decided to go ahead with the season at Walt Disney World Resort starting on July 30, with team practices and games played at the ESPN Wide World of Sports Complex. Many NBA players credit Paul for making it a reality by ensuring players would have a safe environment to live in.

“I don’t think he gets enough credit for us being here,” said New Orleans Pelicans guard JJ Redick, who was Paul’s teammate on the LA Clippers. “His leadership has been amazing. I talked to him a couple weeks ago before we came here. … The thing that really stuck with me was how many hours per day for literally months he was on the phone, on Zoom, talking to people representing himself for the players. He absolutely worked his butt off to make this thing happen. Incredible leadership.”

Los Angeles Lakers forward Kyle Kuzma was also complimentary of Paul, who returned his phone call in regards to social justice before the restart.

“CP has put a lot of work obviously to [the Thunder’s] playoff aspirations,” Kuzma said. “But he is president of the [union] so there are a lot of things on his hands. As a union, we commend him for the work that he does.”

In the aftermath of Floyd’s death, NBA players wanted to make a consistent statement to keep the conversation going about racial injustice and police brutality when the season resumed. One idea Paul came up with was having social justice messages on the back of their jerseys.

Paul credited NBPA executive director Michele Roberts and Miami Heat forward Andre Iguodala, a union board member, as two of the key people that helped with the jersey idea. They took part in several meetings with the league to ensure players would have a voice in Orlando, Florida.

“I don’t think he gets enough credit for us being here,” – New Orleans Pelicans guard JJ Redick

The list of the social justice messages agreed upon by the NBPA and the NBA are: Black Lives Matter, Say Their Names, Vote, I Can’t Breathe, Justice, Peace, Equality, Freedom, Enough, Power to the People, Justice Now, Say Her Name, Sí Se Puede (Yes We Can), Liberation, See Us, Hear Us, Respect Us, Love Us, Listen, Listen to Us, Stand Up, Ally, Anti-Racist, I Am A Man, Speak Up, How Many More, Group Economics, Education Reform and Mentor.

“What also makes it powerful, too, is in our league where we have a guy on my team who’s Italian, Gallo [Danilo Gallinari]. I think he might be putting ‘Peace,’ but in his way. So, we have a stage that is global, and we get an opportunity to express ourselves on a global stage, which a lot of people don’t get an opportunity to do,” said Paul, who will wear ‘Equality.’

LeBron James, Anthony Davis, Jimmy Butler and Joel Embiid are among at least 15 NBA players who have decided not to put a social justice message on their jersey. Paul, who is close friends with James, is supportive of those players’ decisions.

“That’s exactly why we have a league where you get a chance to make a choice,” Paul said. “And I respect any of those guys’ decisions. They may have their reasons why or not.

“For me … I was excited about the opportunity to speak on ‘Equality’ because I was asked about it. And also, for me, I envisioned my kids watching the game, my homies back home who go to the barbershops and talk about us and whatnot.”

In addition to the jerseys, the NBA will have “Black Lives Matter” painted at midcourt in each of the three venues where games will be played. The NBA is also expected to have a pregame message speaking on social justice during the first four days and possibly other special performances and public service announcements, a source said.

Players are also expected to put social justice messages on their shoes during games and use other creative measures. After being urged by Paul, Houston Rockets guard Russell Westbrook’s clothing line Honor The Gift partnered with the union to make T-shirts for players with additional social justice messages.

In addition, the NBA has set up Zoom discussions for players with the likes of former first lady Michelle Obama, Breonna Taylor’s mother, Tamika Palmer, and political analyst Van Jones.

Through it all, Paul has wanted to make sure the NBA players’ social justice message would be heard.

Rosalyn Durant, the senior vice president of operations for ESPN Wide World of Sports who has been friends with the former Wake Forest star since her days working for the ACC Network, has been impressed with Paul’s behind-the-scenes work.

“Chris has been an important, steady voice from the beginning,” Durant said. “He puts his heart and soul into this.”

“Planning our restart has been a monumental undertaking, especially in the midst of a global pandemic and social unrest in the U.S. We wouldn’t have reached this point without Chris’ leadership,” said NBA Deputy Commissioner Mark Tatum. “During our hiatus, we met regularly, often multiple times per week, and his voice was one of the most influential when we were determining how to move forward with our season and have the greatest impact on racial inequality. Chris has been at the forefront of those decisions.”

Paul told The Undefeated that the NBA and NBPA are combining to form a foundation with $300 million to focus on social justice issues.

“I had an opportunity to have a conversation also with Alicia Garza, who was one of the ladies who founded Black Lives Matter,” Paul said. “So, I got an opportunity to tell her about the court and actually send a picture of it. She was so excited, and I think the biggest thing though, is that it’s bigger than that. That’s just one statement as far as putting that on the court, which a lot of our players wanted to do, but it’s even bigger than that.

“And it’s the fact that we got $300 million allocated to a fund that our players will have an opportunity to determine where it goes. So, for the next 10 years, $30 million a year. That’s a real change that we talk about.”

“That Social Change Fund and with that initiative, we want to bring people together,” Paul said. “Even though me, Melo and D launched it and putting our own money in, we want other people, not just athletes, other people who want to be a part of it, and want to make a change in all different places, whether it be systemic racism, whether it be education, whether it be health and wellness, whether it be fighting police brutality. All these different things, supporting HBCUs, whatever it may be.

“We want to become more educated. We want to empower, and I think it’s just us also being mature enough to understand how much stronger we can be together.”

While busy with his off-court efforts, Paul, 35, is also prepared to lead the Thunder into the playoffs — something that didn’t seem possible when he was dealt last offseason from the Rockets to a rebuilding Oklahoma City team. But Paul has embraced the mix of veteran and youth talent on the roster, and has been a mentor to Shai Gilgeous-Alexander and rookie forward Darius Bazley. With Paul’s wife and two children in Los Angeles, it wasn’t uncommon for players to be at Paul’s home in Oklahoma City watching film with him during the season.

“He came in willing to help any way he could with the existing players,” Thunder general manager Sam Presti said. “Not just the younger players. But he took time to get to know all his teammates, his coaches. He has been all we could’ve expected and more.

“He has played at an elite level by any standards. But he has helped make everyone else better.”

“It’s amazing when you get here and you see how much fun guys are having, because it’s been tough on everybody, whether it be COVID, whether it be the social injustice things that took place.” – Chris Paul

The Thunder resume play in the fifth spot of the Western Conference with a 40-24 record and a spot in the postseason. Thunder head coach Billy Donovan said it is unbelievable that Paul, who made his 10th All-Star appearance in February, is in great shape with all of the outside demands he’s had.

“He is always fighting for inches to improve upon,” Donovan said. “He takes care of himself. He eats the right way. He rests. He hydrates. He is doing great. To me, it’s been impressive to see him do all that [union] stuff to help get the league back to playing and get himself back to shape.”

The NBA bubble appears to be working effectively so far. And Paul’s efforts have not gone unnoticed. He cannot walk far without someone saying, “Thank you.”

Paul, too, is thankful.

“It’s amazing when you get here and you see how much fun guys are having, because it’s been tough on everybody, whether it be COVID, whether it be the social injustice things that took place. It’s been hard on guys’ families.

“So, when we were all home, we were already just like, ‘The hell with this. Throw the season away. The hell with it. Forget basketball.’ But I think guys got here and realized how much they missed it.”