How funds from Jrue and Lauren Holiday are impacting recipients

In late November, Sylvester Ani Jr. was at home when his cellphone rang. He looked down at his phone, but didn’t recognize the number.

On the line was former U.S. women’s national soccer team player Lauren Holiday, the wife of Milwaukee Bucks guard Jrue Holiday, informing Ani that his nonprofit organization, The Love We Don’t See, was one of 50 organizations and businesses being awarded grants from the couple’s new social justice fund for Black-led entities.

The Love We Don’t See, a community organization that emphasizes changing the life trajectories of young Black and brown children in Los Angeles, would be receiving $15,000 from the Jrue and Lauren Holiday Social Impact Fund (JLH Fund). It was the most money Ani, the organization’s 27-year-old founder, had ever seen.

“Her saying that, I said, ‘Lauren, before you tell people something like that, you got to tell them to sit down,’ ” Ani said. “I could have been somewhere where, if I fell, I’m not in a good situation.”

After the coronavirus pandemic shut down the sports world in March 2020, and the police murder of George Floyd set off a global anti-racism movement, Jrue Holiday, then a member of the New Orleans Pelicans, used the remaining $5.3 million of his 2019-20 salary to establish the JLH Fund. The fund was initially meant to help Black-owned businesses and Black-led organizations in three metropolitan areas: New Orleans, where Jrue Holiday played, and the couple’s hometowns of Los Angeles (Jrue) and Indianapolis (Lauren).

In November 2020, the fund, which is being managed by The Kinship Advisors, a company that consults and coaches brands and athletes in philanthropy, began dispersing grants to the 50 awardees the pair selected. In total, $1 million was donated, with the organizations receiving, on average, $15,000 each.

In May, the couple announced that they would be opening up a second round of grant applications that would again target organizations and businesses in the three original cities, plus Milwaukee, where Jrue Holiday was traded to in November. The fund received nearly 2,000 applications in less than two weeks.

On June 11, the NBA announced that Jrue Holiday was one of five finalists for the inaugural Kareem Abdul-Jabbar Social Justice Champion award, given to the player who best embodies the league’s all-time leading scorer’s message of civil rights, Black empowerment and racial equality.

“The goal of the JLH Fund is to have a long-term impact on underserved communities,” The Kinship Advisors founder Alexys Feaster wrote in a statement to The Undefeated. “The hope is that the organizations and businesses that receive the grant funding and the additional resources to help them succeed will create a more broad community of support.”

Before the pandemic, the Holidays tended to keep to themselves when it came to discussing racism in America. Whether they experienced microaggressions from Lauren Holiday’s fellow white soccer teammates or outright racism from car salesmen toward Jrue Holiday, the pair never wanted to discuss publicly the rampant racism they faced as an interracial couple.

But after the murder by police of Floyd in Minnesota and Breonna Taylor in Louisville, Kentucky, and the couple’s own incident with law enforcement that involved Jrue Holiday being handcuffed, the two decided enough was enough. They wanted to make a change.

Weeks later, the couple announced the creation of the JLH Fund, a vehicle for them to help combat systemic racism and economic inequality facing Black people in the communities they called home. 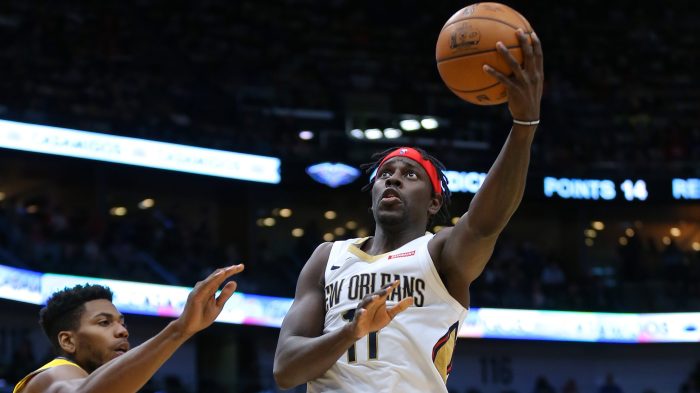 Jrue Holiday gives thanks for family and Anthony DavisRead now

Just as Black people are not a monolith, neither are the forms of racism they face. Discrimination can take many forms, including health, education and criminal justice. The organizations the JLH Fund awarded grants run the gamut: a maternal health care center in New Orleans that provides free postpartum and lactation services, a mentoring nonprofit in Indianapolis that aims to close the college-access gap for underserved teenagers, a Black-owned family lemonade stand in Compton, California.

For three organizations – The Love We Don’t See, 5-Eleven Hoops in Los Angeles and Operation Restoration in New Orleans – the grant provided funds and resources for those ravaged by the burgeoning health crisis, maintained safe spaces for children with developmental disabilities, and helped free Black women from the carceral state.

Ani founded The Love We Don’t See a few months before the pandemic essentially shut down the country. The nonprofit emphasizes a five-pronged approach for providing Black and brown kids in Los Angeles the necessary resources and tools to be successful in life. Those five core tenets are: entrepreneurship, coding, financial literacy, social-emotional learning and multicultural exposure.

Ani believes a lack of access to information and education is what holds back the children he works with, most of whom come from families at or below the poverty line. Every child is like a sponge, he says, waiting to soak up information. But a sponge is only useful if there’s a source of water. Ani tries to make his teachings relatable. When it comes to financial literacy, for example, Ani applied the GameStop controversy from January, when novice day traders manipulated the video game seller’s stock price. The children understood buying video games, but now they could learn about the actual money behind businesses like GameStop.

“If we invest more with real-life, applicable information that’s going to also translate into their everyday lives, we’ll see a much better result for them and their families,” Ani said.

Ani used the JLH Fund grant to launch a scholarship at his alma mater, Cerritos College in Norwalk, California, for students who have been affected by systemic racism and work toward furthering social justice initiatives. The Love We Don’t See also established the Guaranteed Income Pilot program. Based on civil rights leader Martin Luther King Jr.’s economic vision through his “Poor People’s Campaign” of a guaranteed, middle-class income for every American, the pilot program will provide people with $400 a month for six months. It was launched to both help individuals struggling financially during the coronavirus pandemic, but also to collect data to further advocate for guaranteed income at the local and national level. The program has a goal of $35,000, of which $10,000 has already been raised.

5-Eleven Hoops, a nonprofit that specializes in teaching basketball and social and cognitive skills to children with autism or other developmental disabilities, was founded by Stacy McAlister Jr. in 2016 after his son was diagnosed with autism.

McAlister, 33, played in professional leagues in England, and Brunei in Southeast Asia. He had never considered transitioning into coaching and training, but after running a basketball clinic at the Special Olympics, he began envisioning a way of replicating that for Black and brown communities back in his hometown of Compton, where there were few, if any, basketball programs for those with developmental disabilities.

“I just remember going back to my room, and I was like, ‘How can I do this back home?’ ” McAlister said.

Over the past five years, McAlister said, he’s worked with more than 1,000 kids through 5-Eleven Hoops and other Los Angeles-based organizations. He sees basketball training as a way to both teach young children about the game, but also to not let their disabilities define them.

The JLH Fund grant went toward administrative costs for 5-Eleven Hoops, facility rentals in a safe environment in Compton, insurance, and costs for jerseys and other gear.

“It’s bigger than basketball,” McAlister said. “It’s just pushing them and helping them on their life journey with their diagnosis.”

Operation Restoration is the brainchild of founder and executive director Syrita Steib. In 1999, Steib, then 19, was sentenced to 10 years in federal prison for her role in robbing and burning down a car dealership in Texas. Since her release from prison in 2009, Steib has worked to help other returning female citizens restore their lives outside of the criminal justice system.

In 2016, Steib founded Operation Restoration, a community support system to address the unique circumstances facing women affected by incarceration. The organization provides access to female hygiene items, assists women returning home to children, and offers education and job resources. In 2017, the organization was behind the passage of “ban the box” legislation that prohibits public colleges in Louisiana from asking about criminal history in admissions.

The pandemic created new hurdles for returning citizens. While many Americans had access to federal enhanced unemployment benefits or stimulus payments, some returning citizens are ineligible for government assistance, including food stamps. Operation Restoration used its grant money to purchase $85 Walmart gift cards for returning citizens and personal protective equipment for those impacted by incarceration. (In May 2020, nearly 90% of women at a correctional center in Louisiana tested positive for the coronavirus.)

The grant was also used for the organization’s community bail fund (Operation Restoration posted bond for 76 New Orleanians since November) and provided rent and utilities assistance. All told, between the JLH Fund and other partners, Operation Restoration distributed $750,000 to those in need since the start of the pandemic.

“The Jrue and Lauren Holiday money really helped us to be able to meet the needs of these women and girls during COVID,” Steib, 41, said.

The JLH Fund was especially beneficial for the organizations and businesses it impacted because Black-led entities are normally shortchanged in philanthropic funding.

While philanthropic giving has been rising in America over the last few years, including last year during the pandemic, there is a large gap between who is receiving those funds. A May 2020 research report, “Racial Equity and Philanthropy: Disparities in Funding for Leaders of Color Leave Impact on the Table,” described how Black-led organizations bring in 24% less revenue than white-led groups, and hold 76% less in unrestricted net assets, which are funds that can be used for any purpose.

For the second round of grants, the JLH Fund, with additional help from FundBlackFounders, will also provide organizations and businesses coaching on crowdfunding, website development, social media and other tools to help the grantees succeed.

McAlister said foundations that normally would have provided funding to organizations such as 5-Eleven Hoops were diverting resources to families impacted by the pandemic. His organization would have had to operate on a slim budget if not for the JHL Fund and other COVID-19 relief funds. The Love We Don’t See had relied on donations and GoFundMe crowdfunding campaigns before the pandemic shutdown started in March 2020. Without in-person instruction and clinics, Ani could no longer adequately raise funds.

The JLH Fund was a lifesaver.

“If we didn’t have that money,” Ani said, “to be frank, we kind of would’ve been lost in the sauce.”