How J Balvin convinced Jordan Brand he was the real deal

Initially, Jordan Brand sought out reggaeton artist J Balvin as a partner in a series of Hispanic Heritage Month campaigns, with photographs of him in upcoming products and key releases.

After all, he was the first Latin artist to perform on the main stage of Coachella. First Latino artist to headline the Lollapalooza festival. First urban Latino artist to surpass a billion views on YouTube. Most nominated artist in a single year for his 13 nominations at the Latin Grammys in 2020. A regular in the front row at fashion week.

“Showing them the fact how global our presence is, our numbers and the reach we have,” he said in an interview with The Undefeated and ESPN Deportes for Hispanic Heritage Month. “It took a year to explain, that it was going to be a statement to have me on it.”

So finally he went straight to His Airness.

The Colombian artist was in Paris for fashion week in 2019 at the same time basketball legend Michael Jordan was in town for the brand’s annual Quai 54 streetball event. A marketing executive made the connection and the two men were able to meet, tucked away in an exclusive lounge, just as midnight struck. Jordan — cigar in hand — was joined by his wife Yvette Prieto. Of Cuban descent, she had long enjoyed J Balvin’s music and even attended his concerts.

The group talked for nearly four hours, trading stories of their upbringings, their work ethic and their drive to the top of their respective crafts. J Balvin told Jordan about landing in Oklahoma as a high school exchange student, sharpening his English and later linking with cousins in New York for his first taste of American culture. It was there, in the early 2000s, that he’d find his love for sneakers, getting his first pair of Air Force 1s just as Nelly’s instant classic celebrating the sneaker had been released, and taking in the style of New York’s streetwear scene.

And he described the influence of Latin music and the impact he could have on Jordan’s brand.

No matter what time it happened to be some 5,000 miles away in Beaverton, Oregon, Jordan texted his brand execs: “We’re giving J Balvin a shoe.”

“I was really blessed to close the deal with Michael Jordan by himself,” J Balvin says now. “It’s a real blessing.”

After a process nearly three years in the making, his official Air Jordan 1 collaboration — he likes to call ’em the “Air Balvins” — was released in December 2020, the first Latin artist to launch his own Jordan sneaker.

It was a dream come to life for the longtime sneakerhead and Jordan Brand fan. Not long after he had beaten out Drake in 2018 as the world’s most-streamed artist on Spotify, with nearly 50 million monthly listeners, he told an audience in New York what he was aiming for.

“I want to have sneakers with my name,” he said at a YouTube TV event. “I want to do something with Jordan. … Have you ever seen a Latino collaboration with Jordan or Nike? Never. So we gotta change the game, and make it global. I’m not going to do sneakers for Latinos. I want to make the J Balvin collab with Nike or Jordan, [available] to the world — because they’re ready.”

Like many of his dreams and goals, which he’s jotted down and dated in a detailed notepad over the years, he was looking to speak his aspiration into existence.

Around the same time, Jordan Brand had also taken an interest in J Balvin, whose chart-topping success was equally matched by his growing sense of style, his front-row fashion week visibility and his global influence rooted in promoting a positive, fun and vibrant expression of his native Colombia.

His music has helped make that turn, with record-setting streaming numbers, an extensive collection of awards show trophies and sold-out live dates around the globe. Yet still, brands were reluctant to fully embrace him as a collaborative partner.

The list of musicians to receive their own Air Jordan is brief. While the brand has made friends and family special editions of its retro models for multiple artists, before J Balvin, only Eminem, Justin Timberlake, Travis Scott and Drake had released their own Jordan shoes to the public.

From the white and red “Chicago” colorway to the black and royal blue original execution, J Balvin has been buying up original 1985 pairs in his size 9 in recent years. He’s also been spotted in every colorway of the Off-White editions by Virgil Abloh and the brand’s more recent remixes on the classic silhouette. 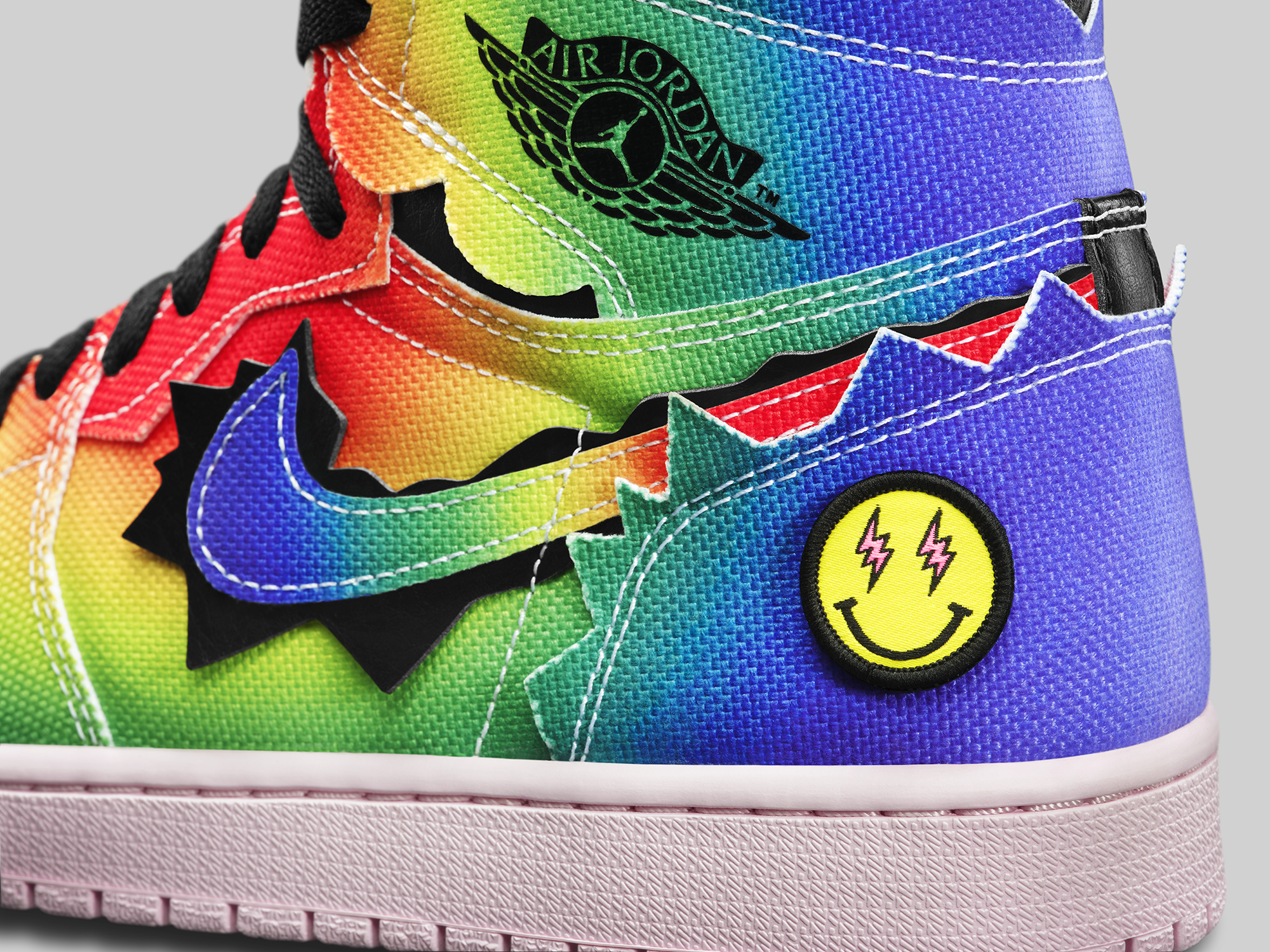 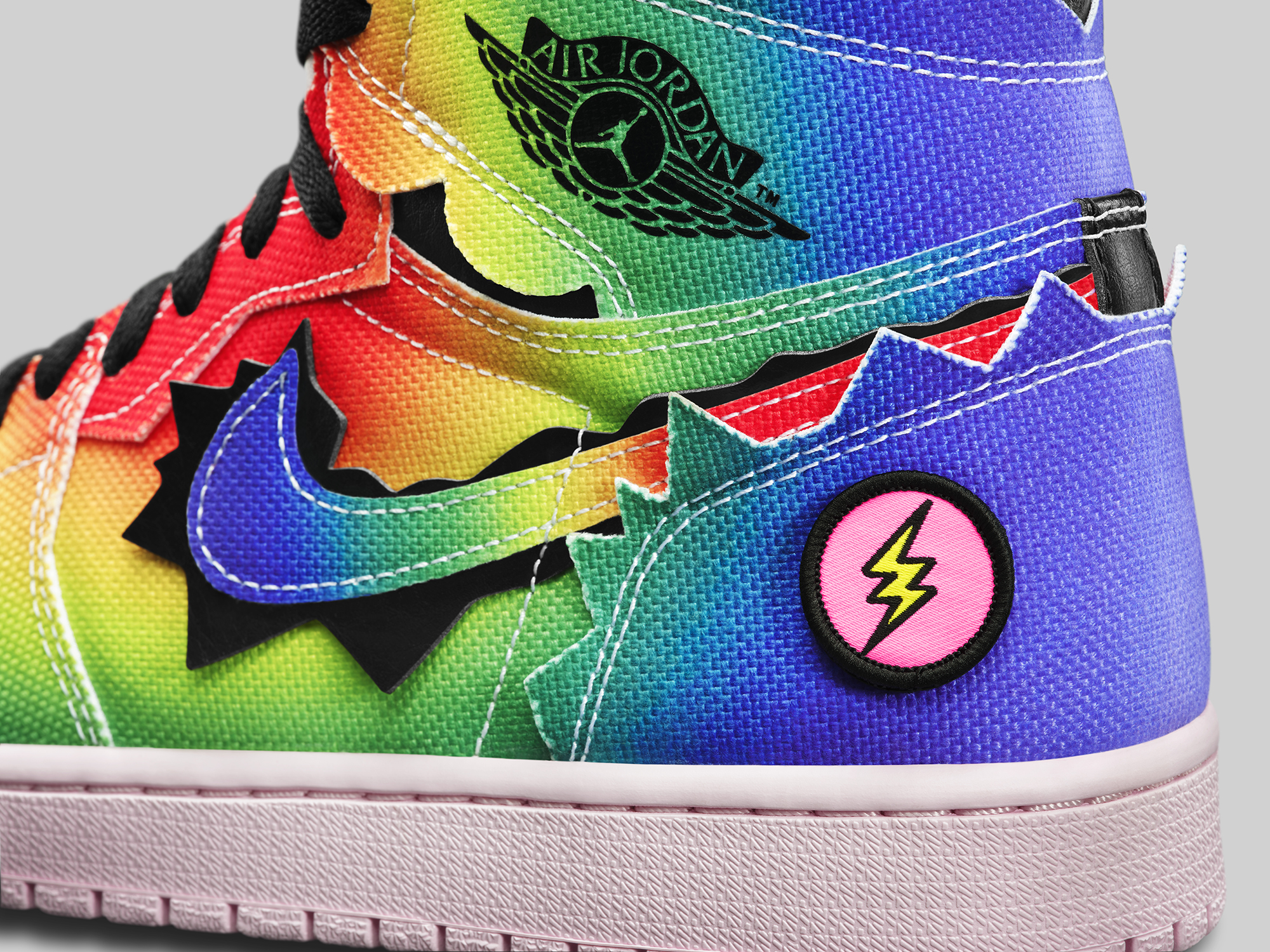 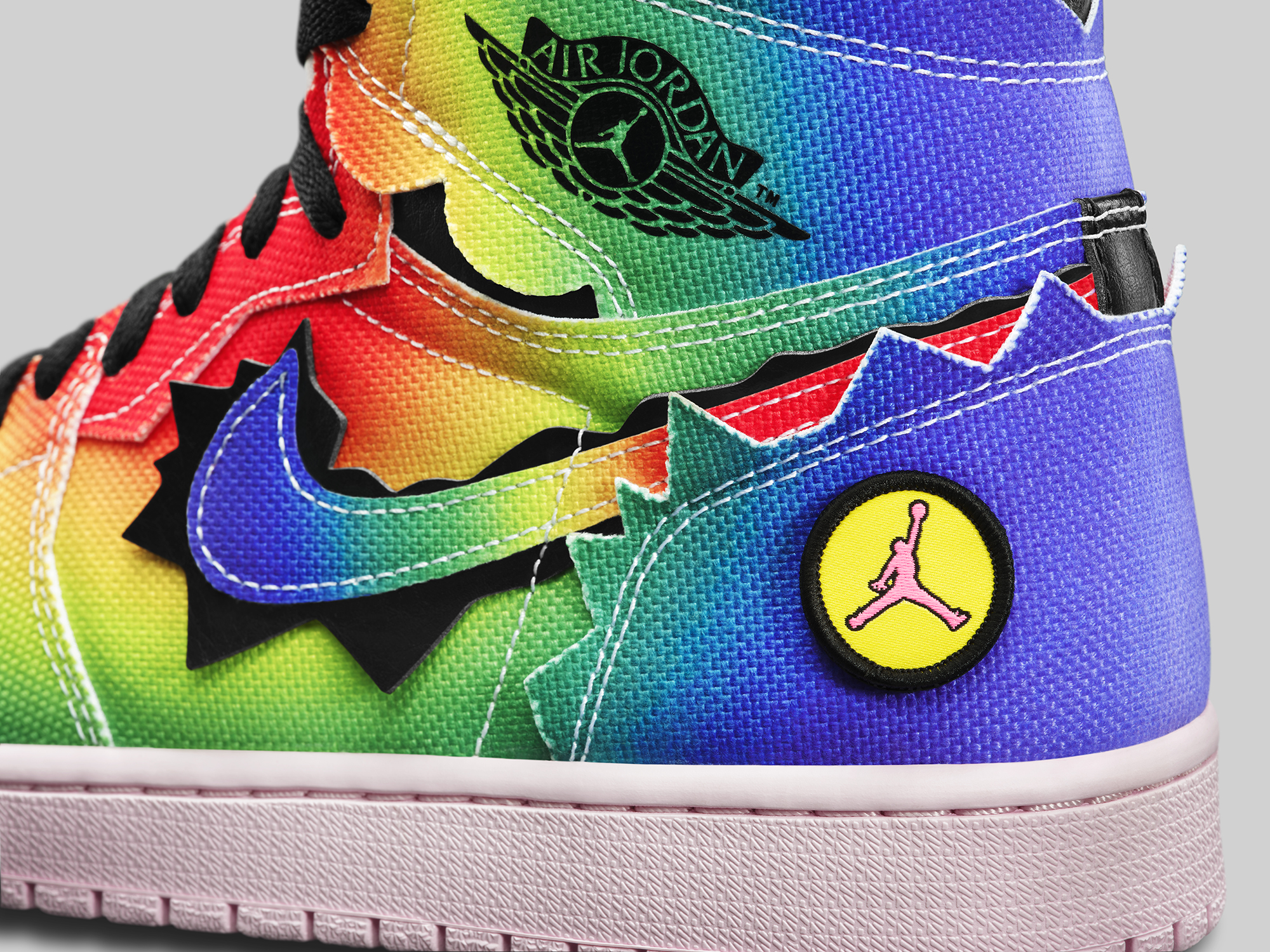 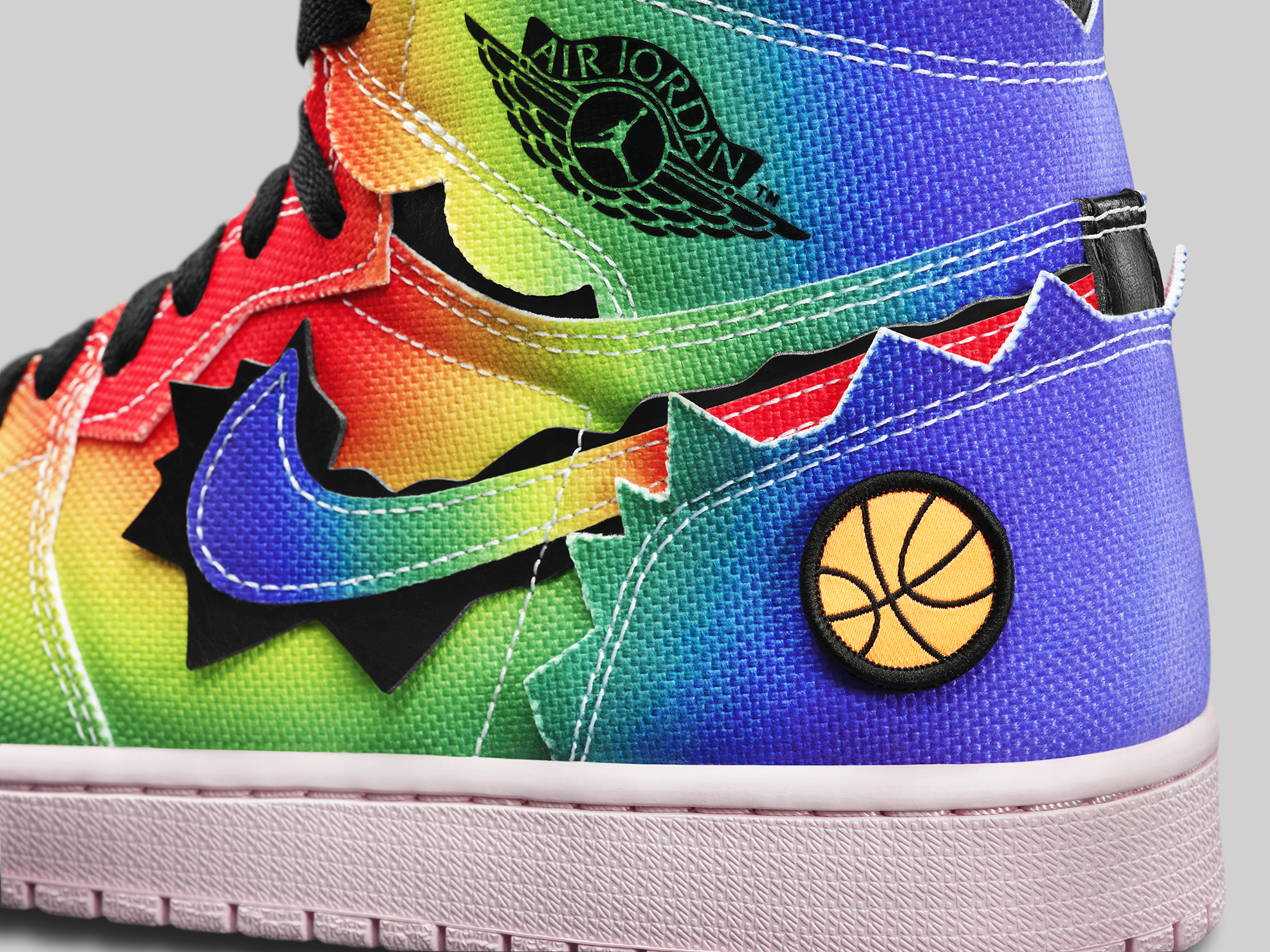 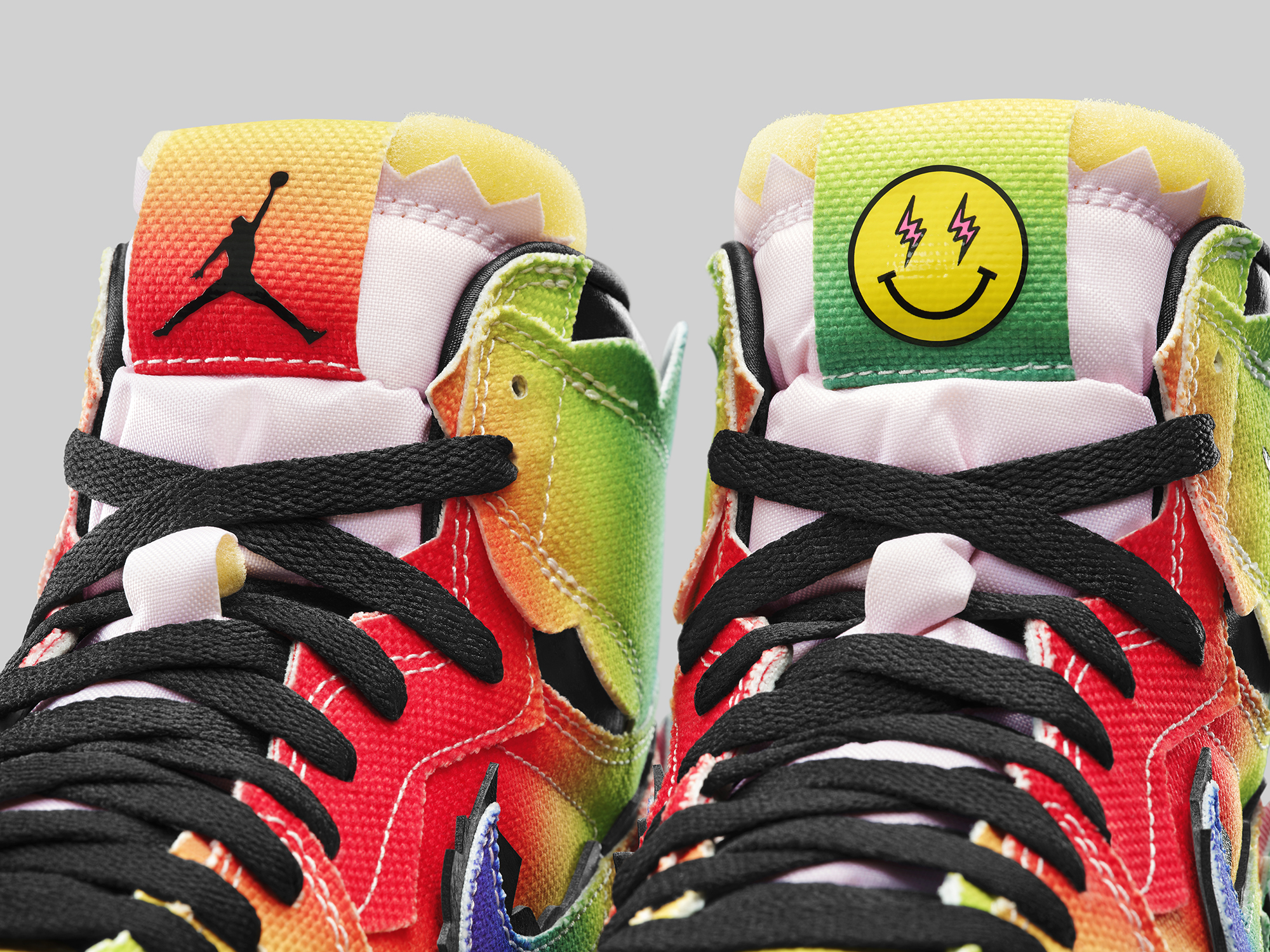 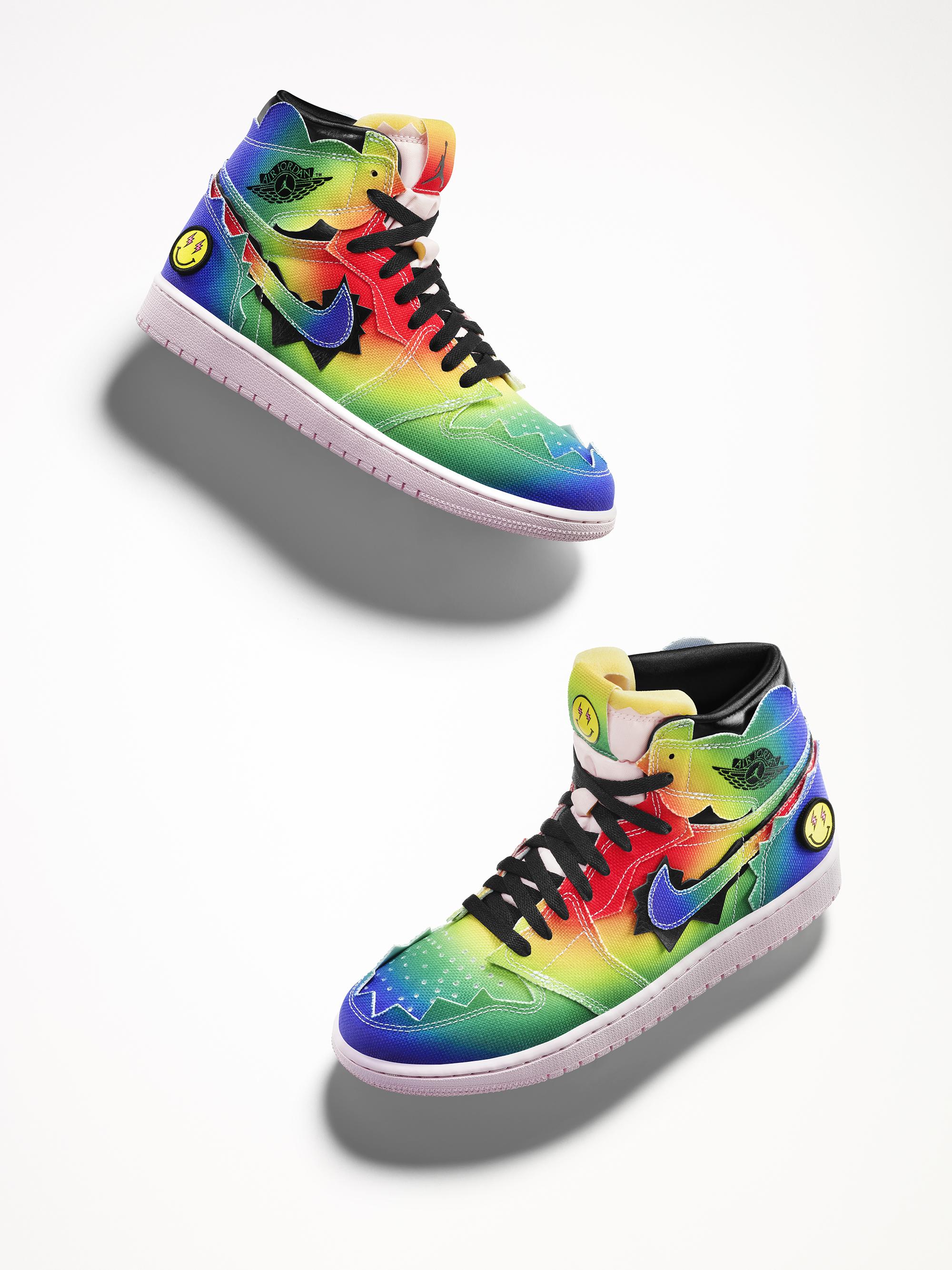 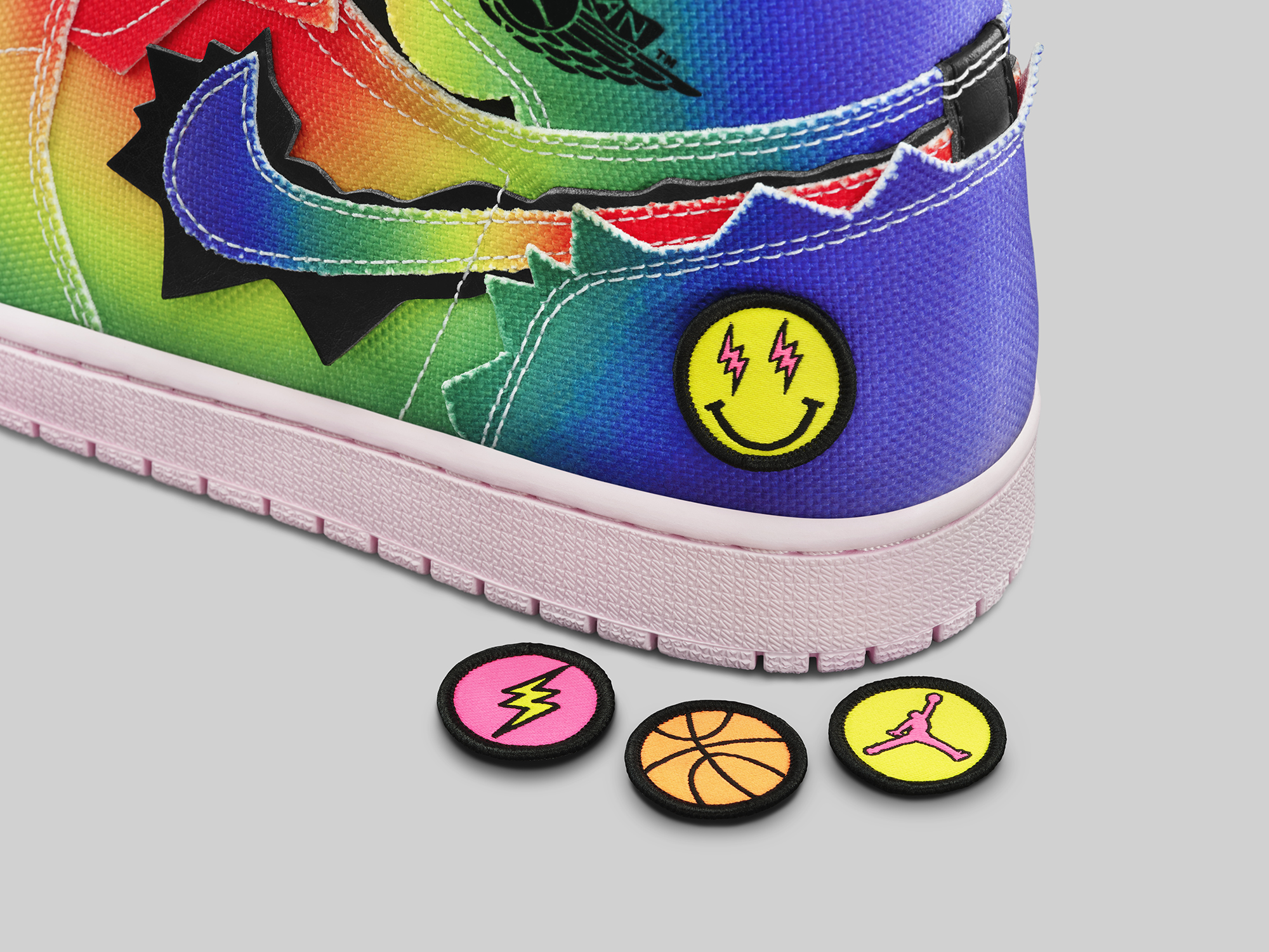 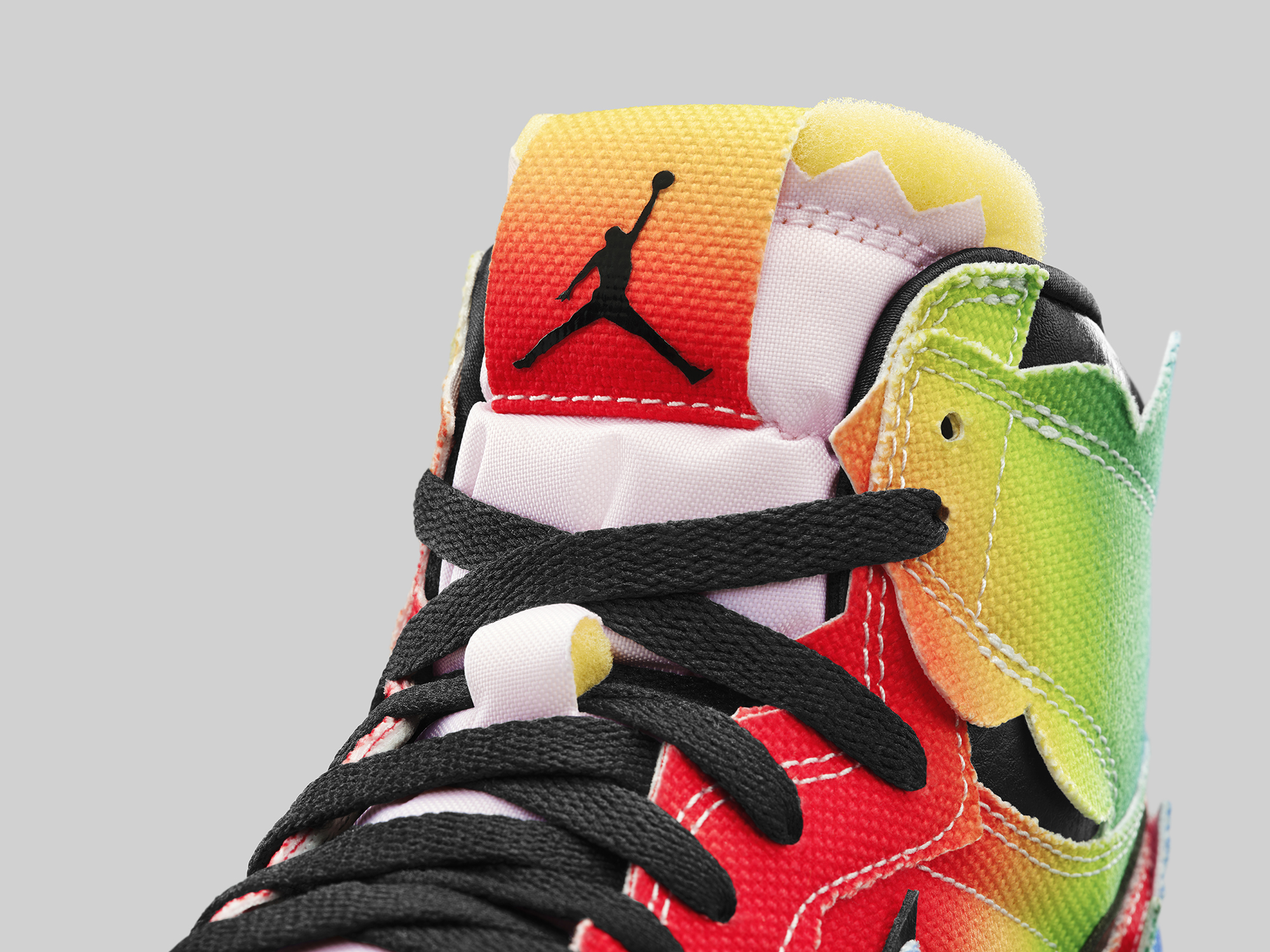 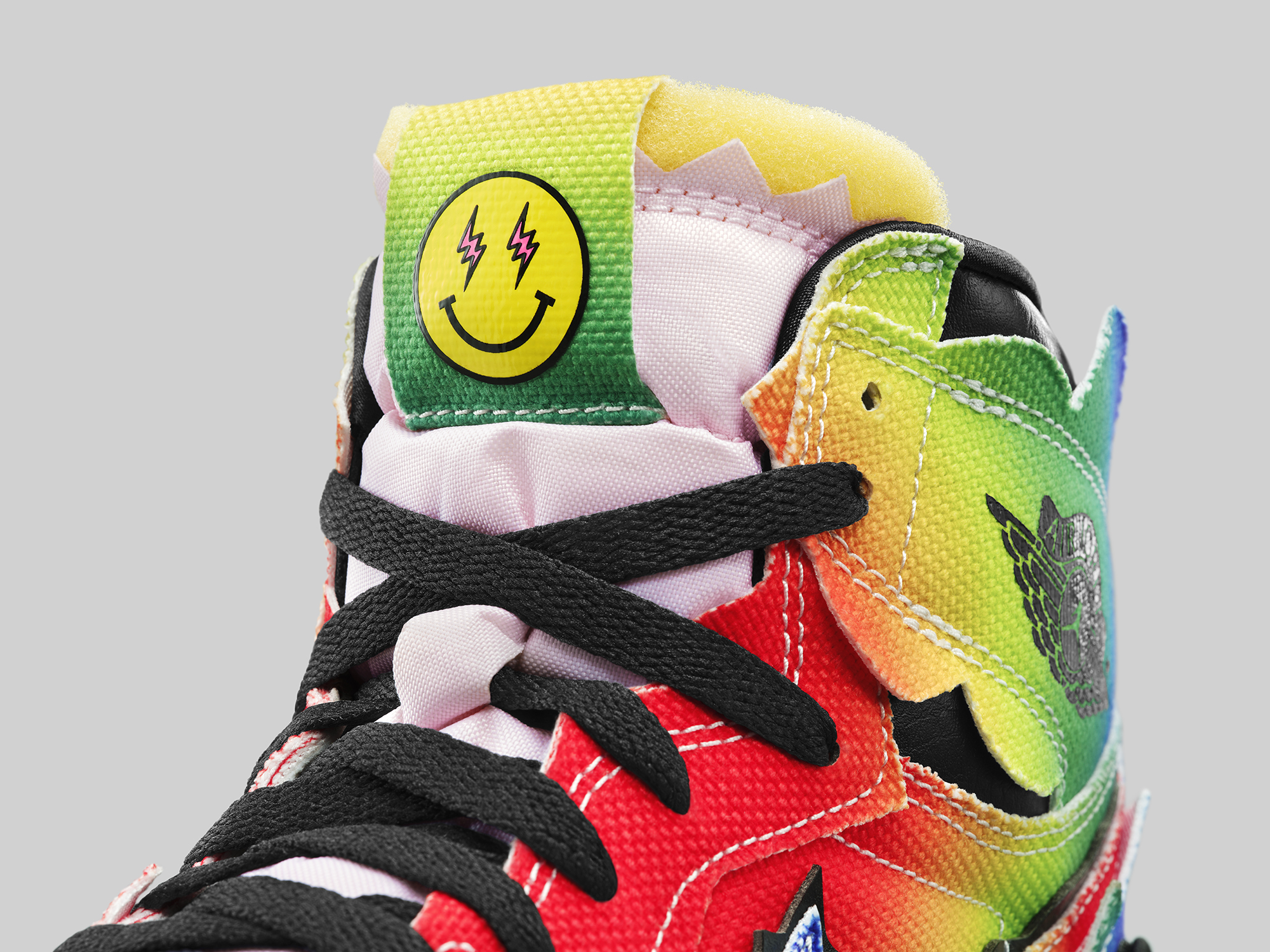 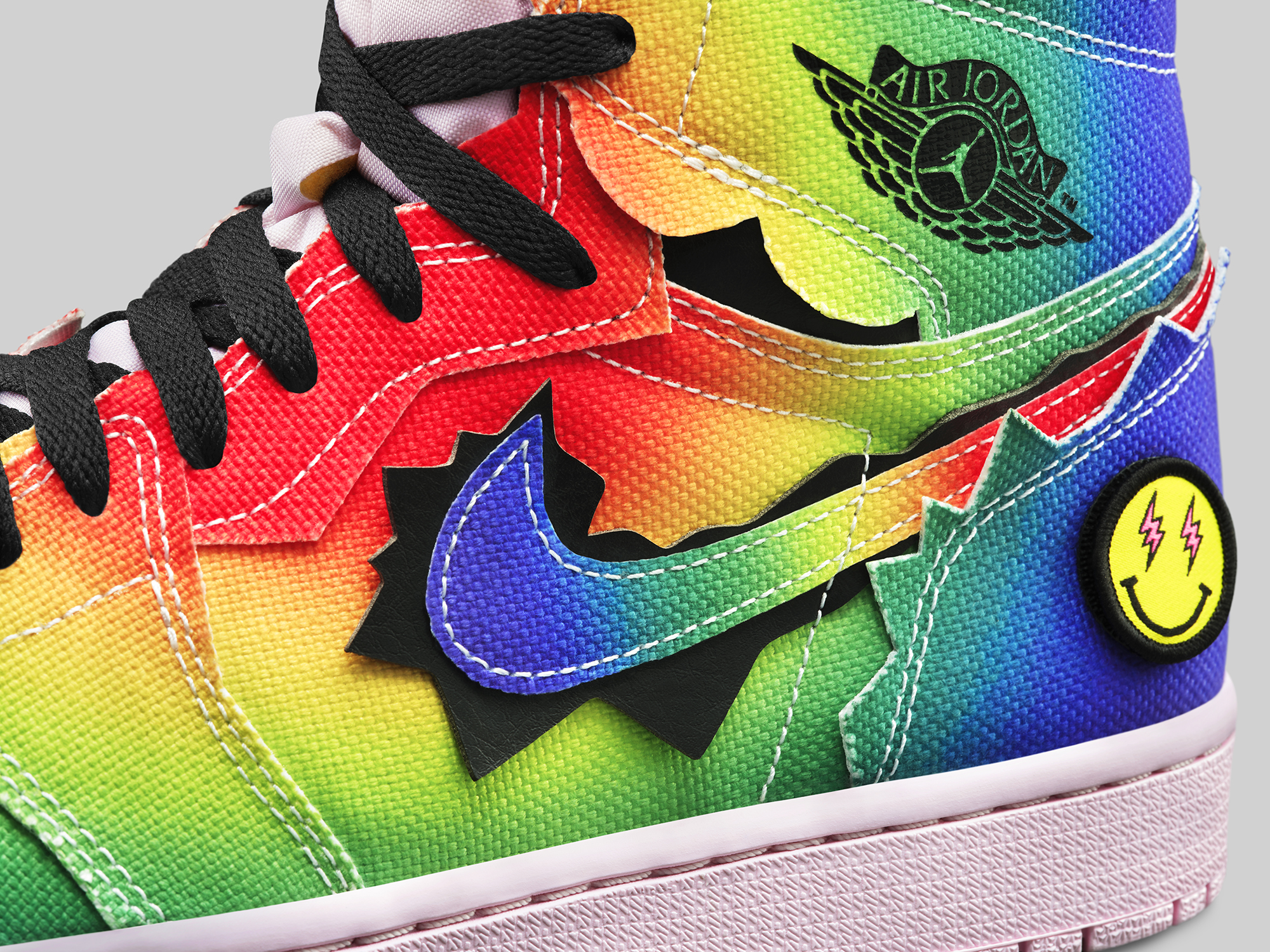 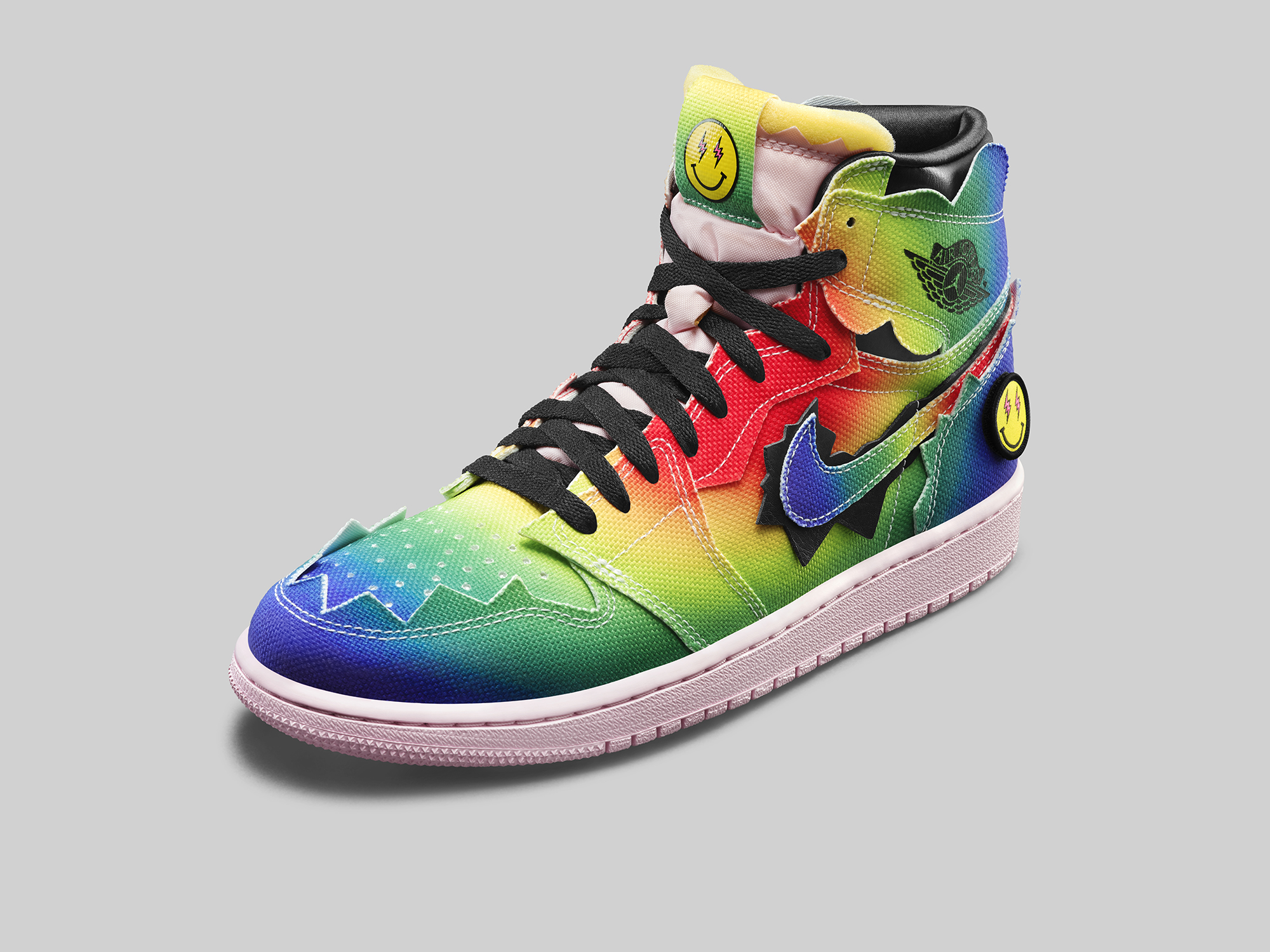 When it came time to begin the process of creating his own design, his vision was set from the beginning.

“If you just change the color, they’re gonna look dope anyway,” he said with a laugh. “I didn’t want to be one more Jordan 1. I wanted to go left.”

J Balvin was paired with a Jordan team of product marketers, creatives and developers that included NRG designer Frank Cooke, who, coincidentally, had been in the crowd at that 2018 YouTube TV event.

Cooke had been following J Balvin’s Vibras Tour throughout the year and checking out his many promotional appearances to familiarize himself with the reggaeton star.

“He’s a superhumble guy and he’s just a really genuine person,” said Cooke. “When you’re working on a collaboration, the first thing you have to have is great energy and great vibes.”

Midway through the process, Cooke left his position at Jordan, becoming a consulting creative partner for J Balvin, and working with stylist and model Aleali May and BMX star Nigel Sylvester on their footwear projects with Jordan. He’s also consulted on collaboration launches for retailers Shoe Palace and James Whitner’s boutique Social Status.

Throughout a series of meetings in Portland, Oregon, and in Paris, J Balvin said he not only wanted to bring a new perspective to the classic high-top silhouette, he also wanted to weave in elements from his most recent three studio albums, 2016’s Energia, 2018’s Vibras and 2020’s Colores.

J Balvin doesn’t consider himself a collector, but rather a fan of sneakers who finds joy in wearing his pairs instead of stashing them away. It was for that reason that he chose not to use leather panels that often crease over time.

“You don’t cry, because they don’t crack,” he joked.

Besides its vibrant tones, J Balvin and his team also looked to “alter and distort” the panels of the shoe, as Cooke called it, reimagining the design and drafting off of the expressiveness of J Balvin’s music.

“[His concert] was just so loud and I could just imagine the speakers blowing [the shoe] away,” said Cooke. “If the lines were just superfluid, they would just be blown away.”

“It felt crazy to alter a classic … it could either work out, or people could be super upset,” Cooke said. “He wanted to take that risk.”

Once the final sample was confirmed, J Balvin couldn’t hold back his excitement to unveil them to the world, debuting his sneaker at Super Bowl LIV’s halftime show in Miami with fellow Latin music star Jennifer Lopez in early 2020.

It’s one thing to have finally received his own collaboration — after some creative lobbying — another for the shoe to get the global release he had dreamed of. The shoe was released at 28 retailers in the U.S., 11 in both Asia Pacific markets and in Latin America, 26 more in Europe and 34 stores in China, with lines, raffles and custom store build-outs.

On the morning of the release, he logged onto Nike’s SNKRS app to try his luck for a size 9 pair, instead coming away with the all-too-familiar “L” and missing out. By J Balvin’s estimate in the moment, the launch was gone in 35 seconds.

“I knew it deeply,” he said of the shoe’s potential success. “I was fearless about it.”

The shoe received some mixed reviews from some purists and older collectors when early leaked images made their rounds in the months leading up to the release. J Balvin said he welcomed the leaks since people were posting about his shoe. And those early concerns didn’t affect the market: The “Colores Y Vibras” J Balvin Jordan 1s now resell for more than three times their $190 retail price.

“To have your own version of the 1, I know he doesn’t take that for granted,” said Cooke. “That will live forever.” 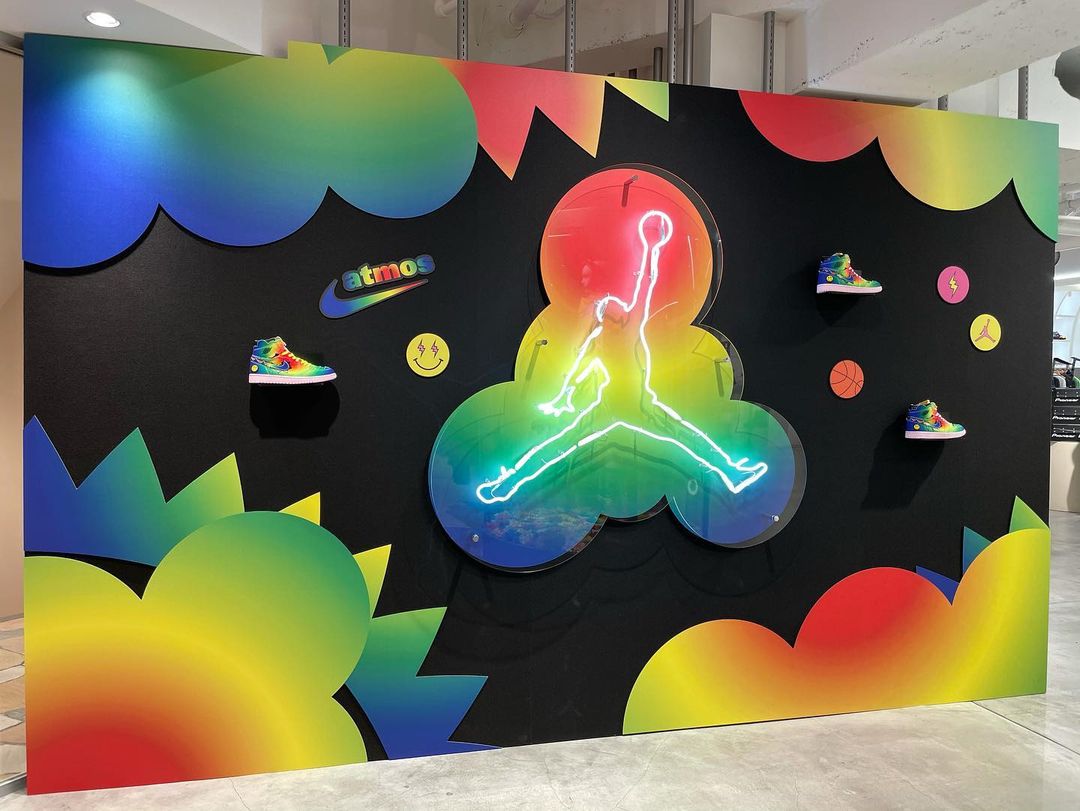 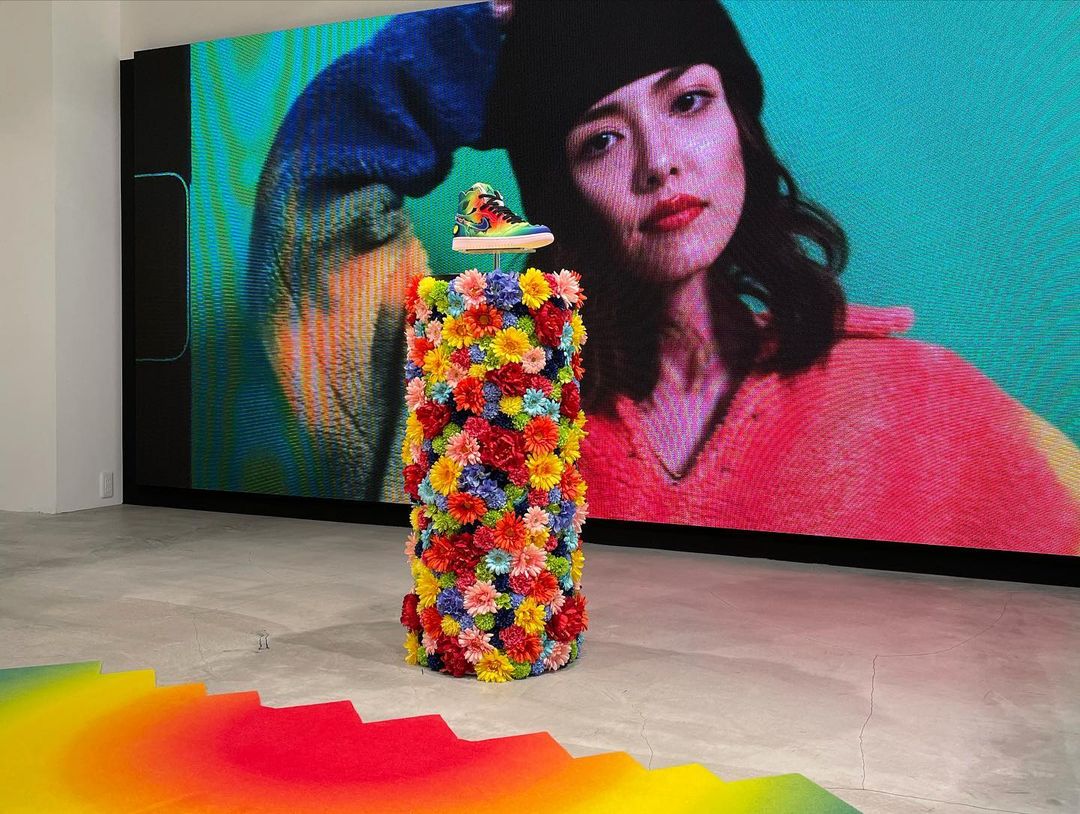 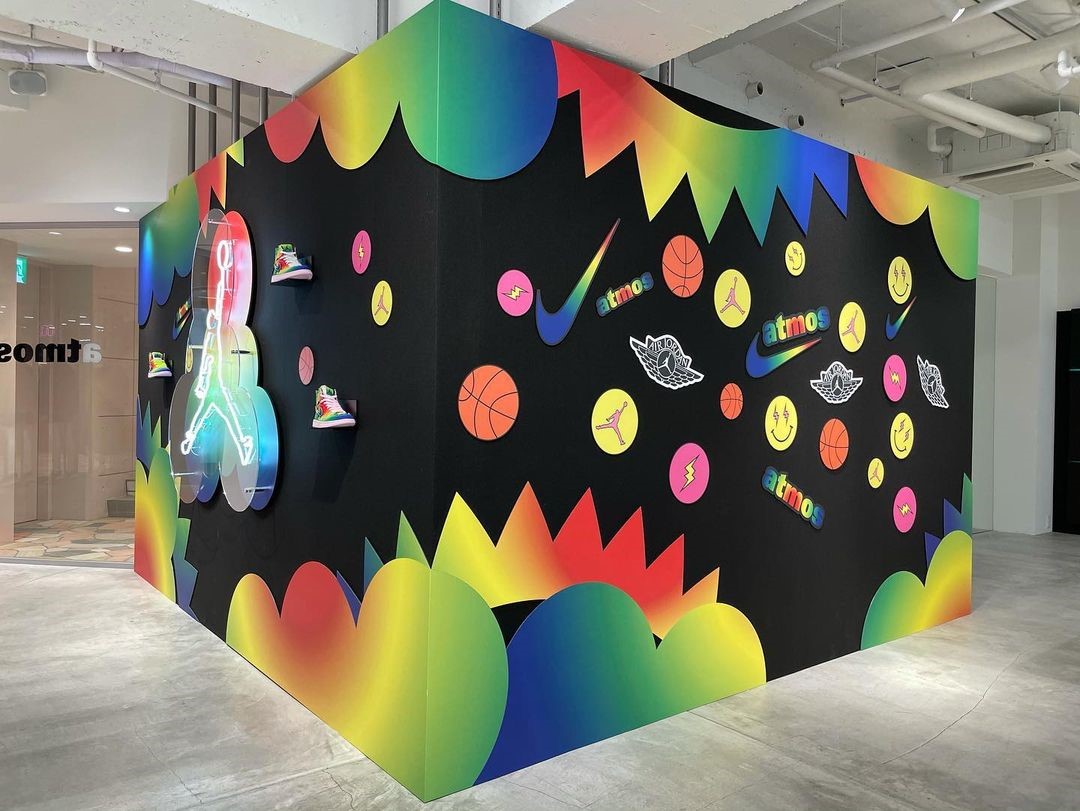 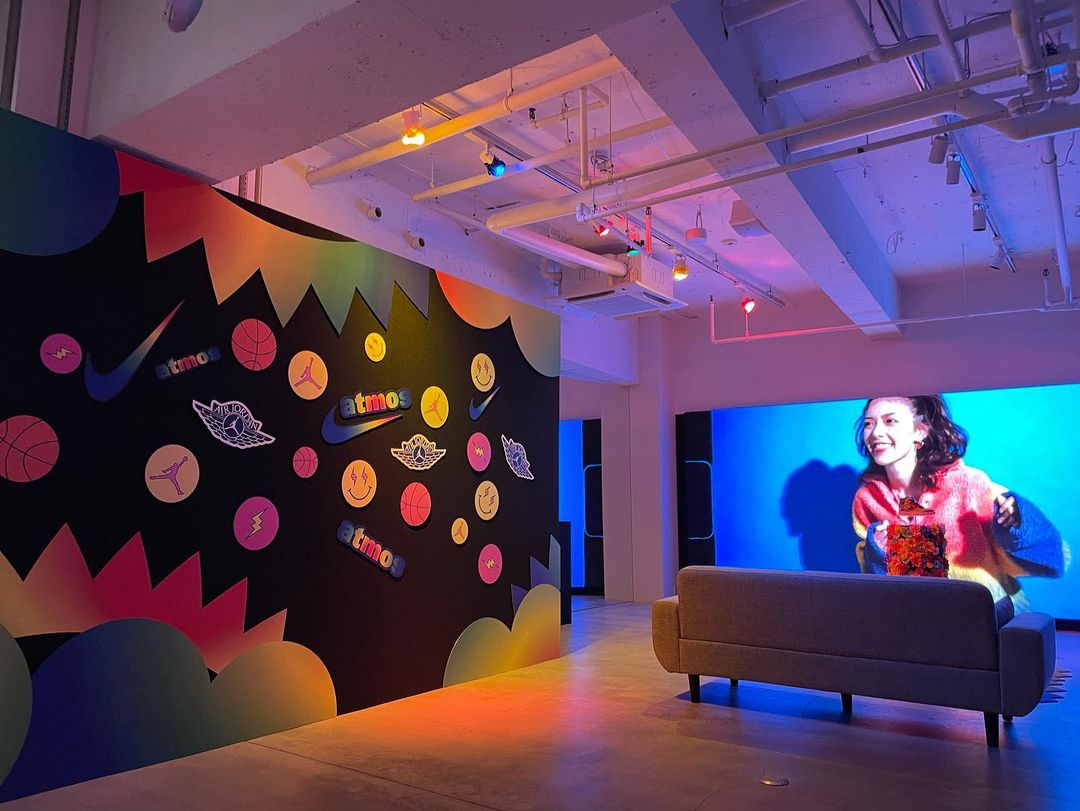 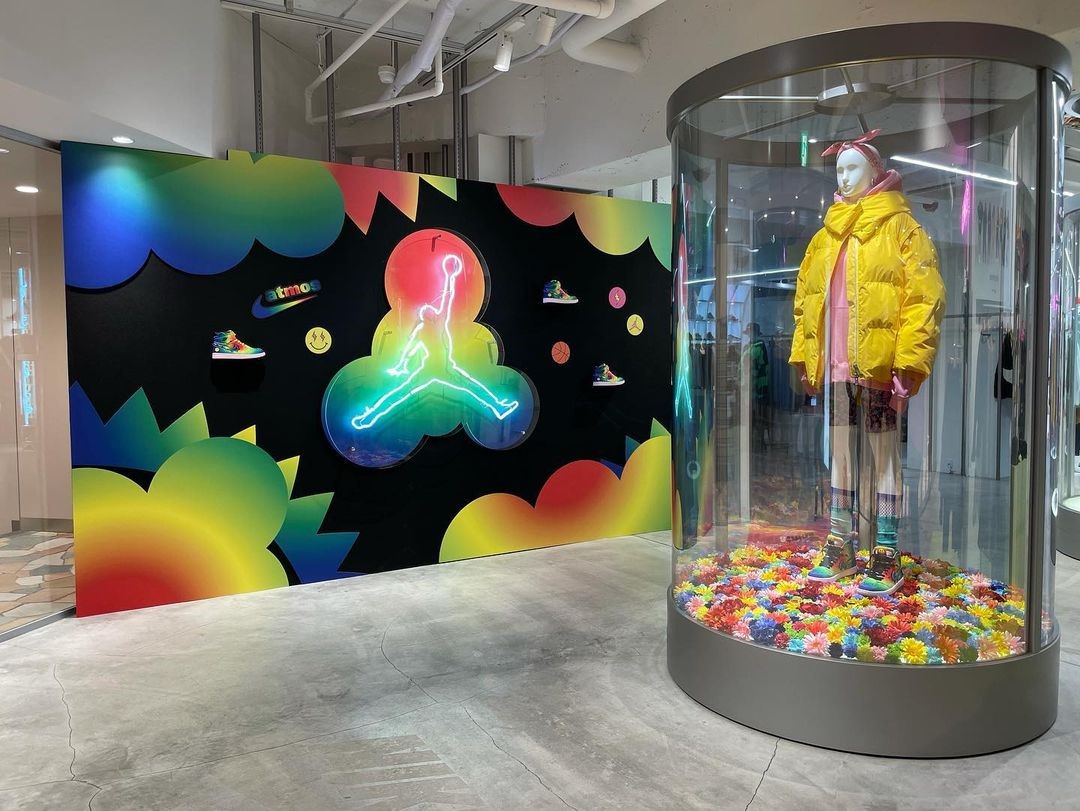 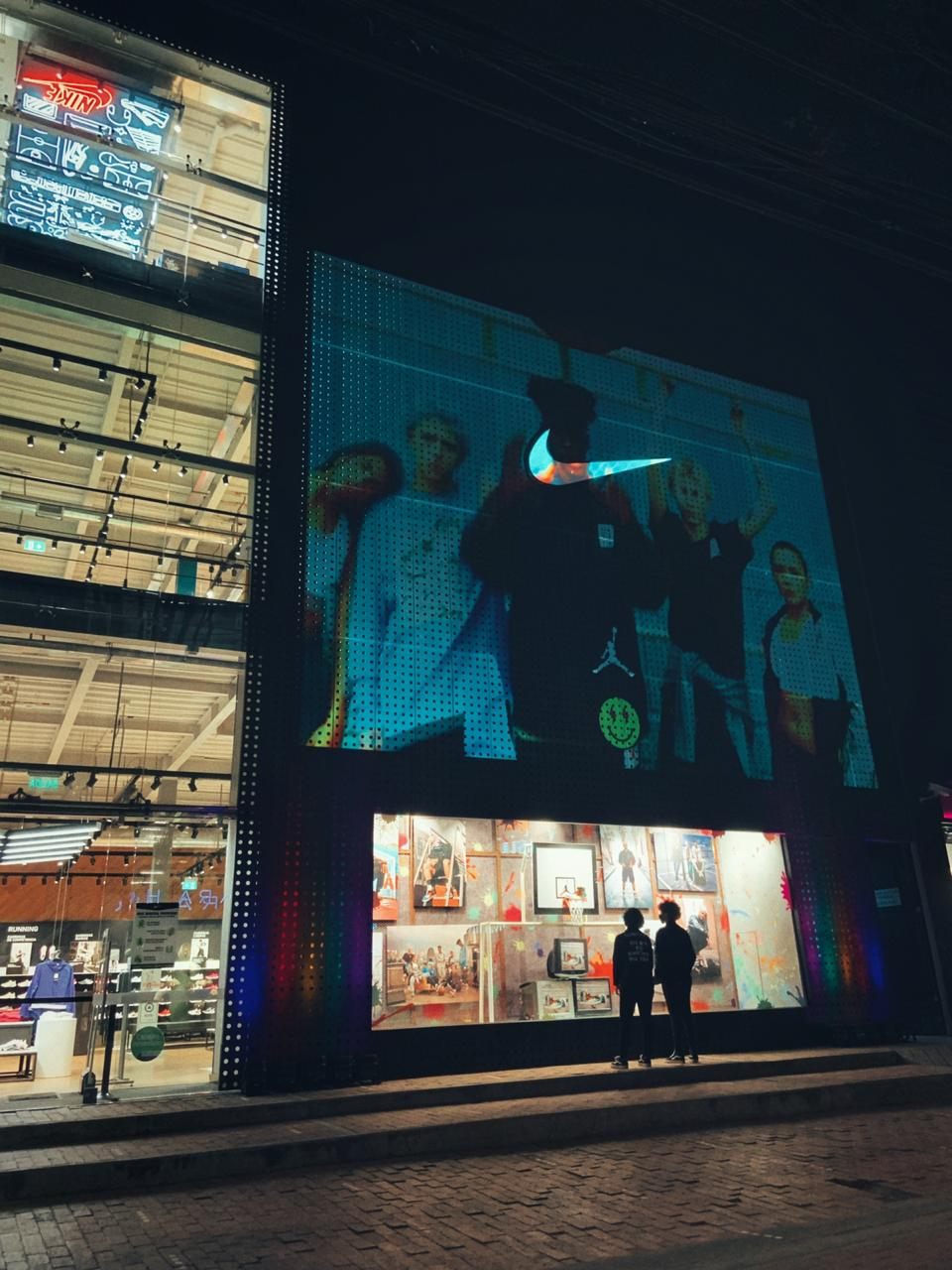 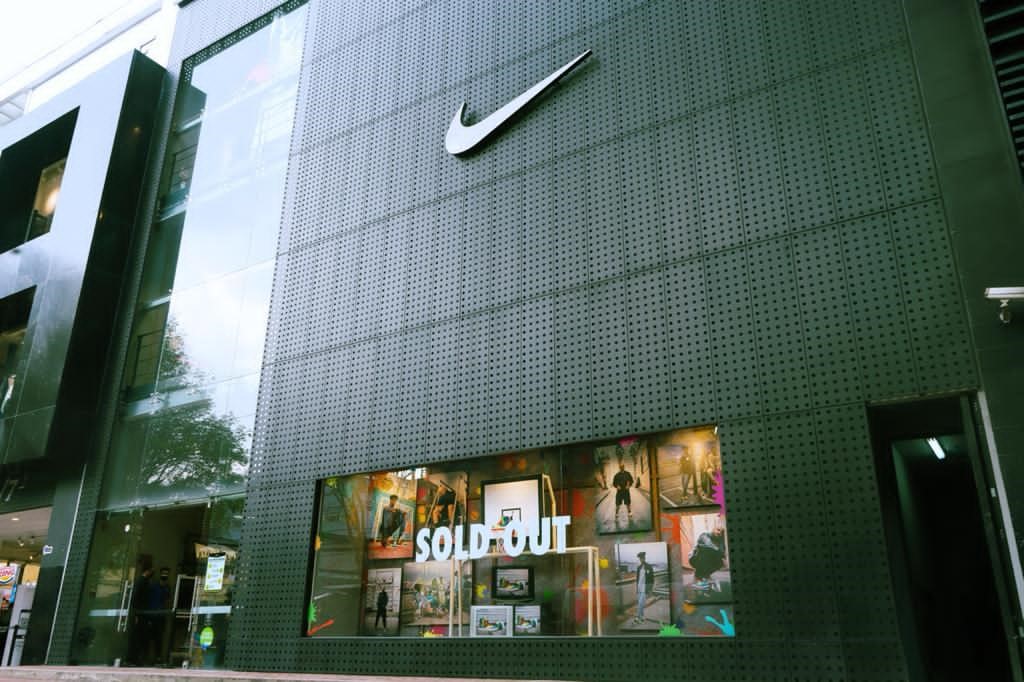 Months after the release, on his early 2021 song “Ma’ G,” J Balvin proudly included the line:

“That’s a beautiful flex, because I’m the only one,” he said.

All year long, celebrities such as Lopez and Justin Bieber have been spotted in the sneaker, and the shoes have also become a common sight during arena tunnel entries for NBA and WNBA stars.

With the launch now nearly a year behind him, J Balvin teases that his next Jordan shoe is already done, with hopes of a potential Air Jordan 4 as his next collaboration sneaker after that. After the success of his Jordan 1 launch, he said, a full collection of apparel and accessories will be accompanying his upcoming project with the brand.

“Now, it’s on another level. They feel the power,” he said. “As Latinos, we are global citizens and we deserve to be in places that we aren’t supposed to be.”

In the last year alone, his marketing profile has continued to explode. He became just the third person to have his own McDonalds meal, following Jordan and Scott. He and his Jordan 1s were added as characters in the popular game Fortnite. His most recent top 5 songs on Spotify now tally more than 1.5 billion combined plays.

By furthering the acceptance of Latinos in global brand campaigns and proving the selling power of his generation of Spanish singers, J Balvin has also changed the narrative of his homeland in Colombia.

“That’s why I feel so proud of it, because we’re showing that we’re more than that,” he said. “All that dark vibes are from the past, and the present and the future is brighter and cooler and inspires the world.”