LOS ANGELES – It wasn’t easy for Markieff Morris to watch an NBA game at Staples Center just days removed from his Los Angeles Lakers’ repeat title hopes coming to an end. But with brotherly love stronger than pride, he was on hand to see his twin brother, Marcus Morris Sr., nail seven 3-pointers on Sunday and play a key role in keeping the LA Clippers’ season alive.

“I felt sick out there,” Markieff Morris told The Undefeated. “I feel sick about the [Lakers’] loss. But I wanted to show my brother love.”

“That’s just normal for us,” Morris Sr. said after the game. “Win, lose or draw, either team, family’s first. He’s going to always come out and support me as I do for him.”

Morris Sr. scored 23 points and grabbed five rebounds during the Clippers’ 126-111 Game 7 victory against the Dallas Mavericks. He became only the second player in NBA history to hit seven 3s in a Game 7. (Stephen Curry has accomplished that feat twice.)

“Marcus is the second-leading 3-point shooter in the league this year,” Lue said. “So we knew he was going to make shots and we just didn’t know when, but what a great time to make 20 3s in Game 7.”

Next up for Morris and the Western Conference’s fourth-seeded Clippers is a second-round matchup against the top seed Utah Jazz.

Morris Sr. worked hard on his 3-point shooting during the offseason and it showed. There was no better 3-point shooter in the Western Conference this season than Morris, who made a career-high 47.3% of his attempts as well as 2.5 per game. A season earlier, he shot only 31% from 3-point range for the Clippers in 19 regular-season contests.

But Morris had struggled with his shot earlier in the series against the Mavericks. He missed all six of his 3-point attempts in Game 1 and all three in Game 6.

Enter Markieff Morris, who yelled words of encouragement while sitting on the baseline in the first quarter of Game 7. The twins also talked before the third quarter. Soon after, Marcus Morris went on to a historic 3-point shooting night at a much-needed time for the Clippers.

“I told him to be ready to shoot. Be mobile,” Markieff Morris said. “You see, he hit seven 3s.”

The 31-year-old Morris twins are extremely close and even have the same tattoos. During one point in the game, Markieff Morris seemed to speak to his brother with just a look. 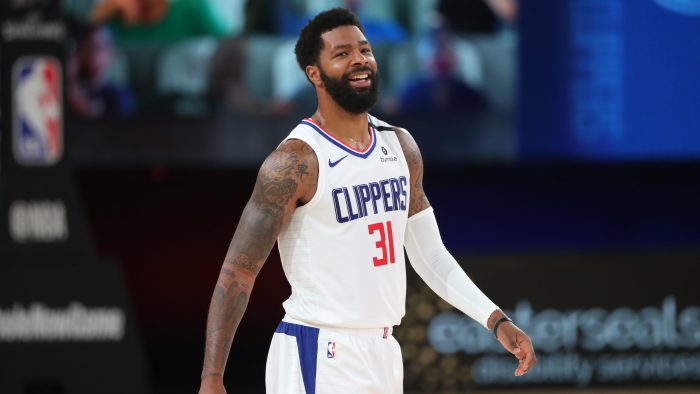 Why the only NBA player who wears ‘Sr.’ on his jersey chose a different messageRead now

“He’s watching it from a basketball mind and showing me stuff, telling me to slow down,” Marcus Morris said. “Just little things that he see during the game, and you know, obviously it helps. He’s always coaching me. We’ve been doing that since we were kids, so I wouldn’t expect anything less. …

“He can talk to me with his mask on and I know what he talking about. So it’s just, you know, we’ve had that forever.”

“It would mean the same as me winning,” Markieff Morris said.