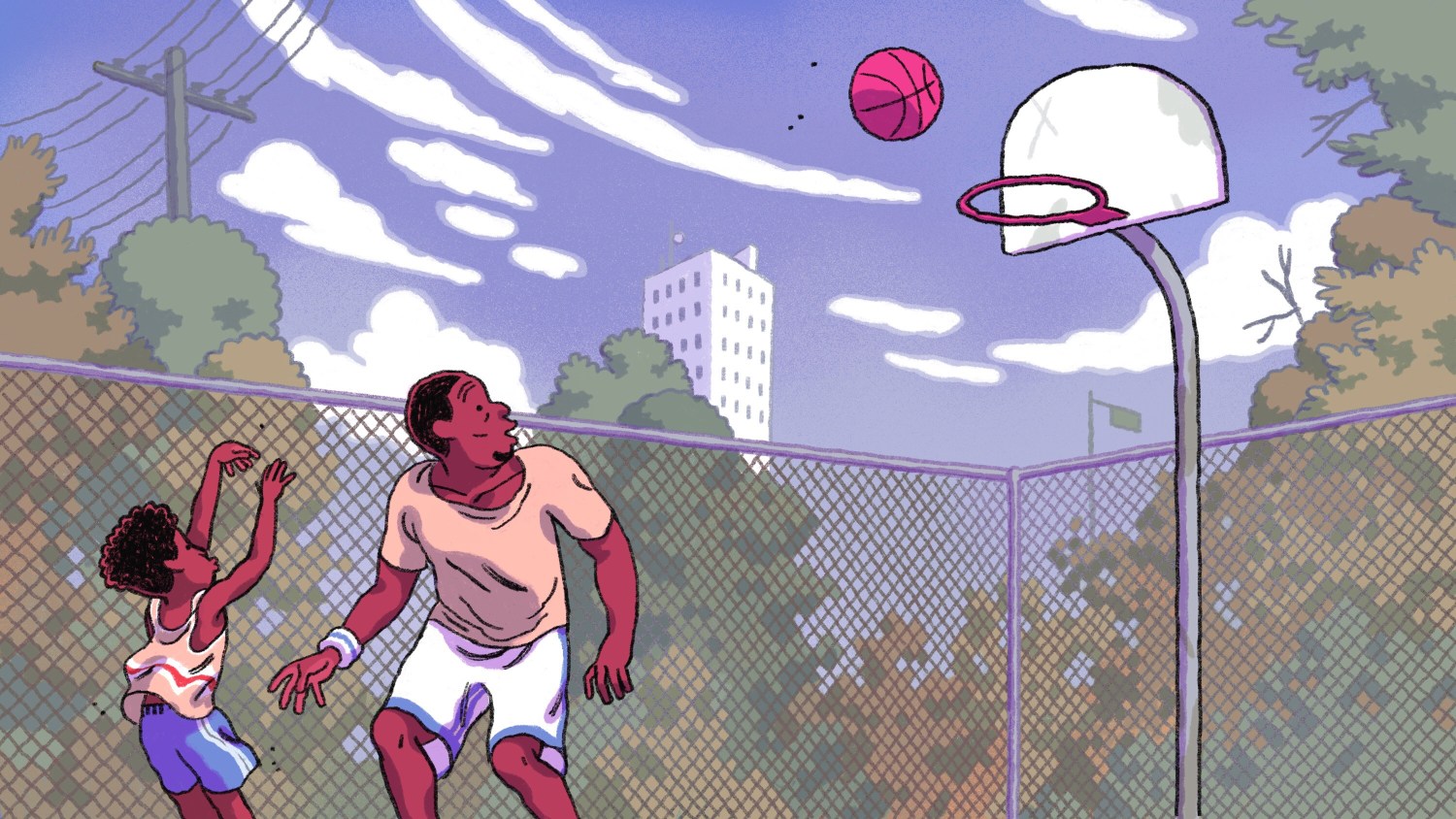 ‘I would be locked up or dead’

I am a black father, and I was once asked if my dad wasn’t in my life, where would I be?

That question stumped me.

It was the first time I had to imagine my childhood, adolescence and even adulthood without my father. I was stumped because every moment of my life, my dad has always been there for my mom and me.

My reply: “I would be locked up or dead.”

It then became my mission to help counter all of the negative stereotypes of black fathers permeating in media and even in our black communities. For Father’s Day 2015 I wrote “Dispelling the myths about black fathers” for CNN, and last year I penned a letter to my daughter for Essence.

Admittedly, I was arrested my senior year of high school. It was my dad, two years prior to my arrest, who said, “Your friends aren’t your real friends.” I found out the hard way sitting in jail.

It was that experience as a 17-year-old that transitioned me from never wanting to be like my dad to wanting to be like him every day. I had committed to Florida A&M University (FAMU) months before my arrest; coincidentally, my dad attended FAMU too. Even though I had no intentions of pledging a fraternity, I ended up pledging Omega Psi Phi, the same fraternity my father pledged, while at FAMU. Chalk it up to my dad’s influence but, even more so, God’s plan.

I knew there were other black sons and fathers out in the world, similar to mine, and I wanted to find them. Below are their stories.

Harold Reid I, 72, an educational administrator and retired superintendent of schools from Piscataway, New Jersey, Township Board of Education, pledged at Gamma Xi, University of Maryland Eastern Shore, in 1968.

His son Harold Reid II, 37, pledged at Beta Chi at Hampton University by way of Delta Nu at Eastern Michigan University in 2000 and is a public relations and sports marketing executive at Jackson Spalding, a world-renowned agency based in Atlanta.

“It [fatherhood] means the world to me. I have five children, and to have had several great examples of fatherhood from my grandfathers to my dad, I always dreamed of being a wonderful father and trying to provide the same love, care and wisdom he provided me,” said Harold II.

Harold I, the second child from a family of 12, was raised by what he describes as two of the greatest parents ever. “I strongly feel it’s more than the norm for black fathers to take their child to school, help with homework and many more valuable foundation-building activities that lead to building strong young black men,” he said.

I recognize the other narratives that address issues, like the black men and black fathers behind bars or the 1.5 million missing black men in the United States. However, the only narrative that matters to me these days are those positive stories of people like the Reids and a South Carolina father-and-son duo, the Bishops.

Not only are the Bishops members of Alpha Phi Alpha but they also pledged at the same chapter, Theta Nu.

Jordan Bishop, a student at the University of South Carolina pursuing a degree in public health, crossed the burning sands in 2017. His dad, Moses Bishop, a human services specialist with the South Carolina Department of Social Services, crossed in 1985.

“So many people believe the horrible stereotypes of black men. So as an African-American, I feel in many aspects that we must go the extra mile …,” said Jordan. “[For decades], the media focused on low-value black fathers. It appears that the media fears a strong black brother who is well-educated and a leader,” Moses, his father, continued.

This sentiment was a common theme among these black men about what it means to be a black father in America.

Bredric A. Berry, 26, a law student at the Thurgood Marshall School of Law at Texas Southern University, said, “Black fatherhood means establishing a legacy. … I’m not a father yet, but I want to be an outstanding husband and father when the time comes.” The Phi Beta Sigma, 2010 Zeta Beta (University of North Texas) initiate went on to say, “I plan to provide in a miraculous way and through my actions allow my children the opportunity to start businesses and chase their dreams. It’s all about providing an opportunity.”

Bredric’s dad, Fredrick Berry, 57, a program analyst and 1980 Kappa Kappa Chapter at Northeast Louisiana State University initiate, believes black fatherhood is “providing for my family and setting a godly example for them to follow. I am proud to be the father of two young men, Bredric and Kiedric, both who pledged Sigma. … I am a proud black father. And seeing my sons succeed means everything to me and shows what black fatherhood means.”

These sons revere their dads, but there are distinct and generational differences, especially when it comes to things like music. I grew up on R&B and hip-hop. My dad grew up listening to R&B, funk and jazz and respected rap but said it wouldn’t last like Frankie Beverly has. I can finally say my dad was wrong about something.

Bredric experienced something similar. “My favorite artists are Kanye West, Jamie Foxx and either Drake or Kendrick Lamar. I used to be a crazy [Lil] Wayne head, though,” said Bredric. “No matter who the artist was, Pops would always say that they were in some way mimicking somebody from the past. The only hip-hop artist I think he ever liked was like Heavy D.”

Fredrick countered by saying, “My favorite artist is George Benson, Earl Klugh, Frankie Beverly, George Clinton, who was original artist. They wrote they own music. People don’t do that these days.”

“My dad introduced me to music like rap from a culture standpoint, and I loved it ever since. Therefore, I listen to the classics like Run DMC and Slick Rick, but I also enjoy today’s best like Kendrick Lamar, Chance the Rapper, Drake and J. Cole,” said Jordan, who is 19.

Like these old-school R&B/rap legends and next-generation hip-hop titans who have provided a soundtrack to millions, these black dads have provided their own soundtrack for success that their sons seem to listen to on repeat … and it’s working.

My dad would always tell me, “Aaron, think before you act.” He still tells me this, but not as much, lol. Listening to the stories of these fathers and sons reminded me of the battles he and I had when I was younger, especially when I was 16 and 17.

But at some point, as a father, you let your son go and pray that it’s God’s will that he returns alive and in one piece.

Harold Reid I reflected on a similar battle with his son, Harold II.

“One of the [most] challenging times with my son had to do with him attending a party with some friends at a local hotel. I said to him it’s OK to stop by, have a little fun with your friends. But if you see or smell any drugs immediately leave the premises, call me to pick you up if necessary, but under no circumstance are you to be in a room or in the presence of anyone smoking weed,” said Harold I.

“Be it as it may, someone was in possession of a controlled substance, and the police arrested everyone in the room and my son included. I was called by the Police Department and was asked to come to headquarters to pick up my son, who was the only person under 18, so he wasn’t charged. The lesson was learned but better understood after going through the process. The battle was convincing me to allow him to go; the challenge was being able to understand what I was trying to protect him from.”

Words to Live by

Harold Reid II: I would say thank you for giving me life and showing me how to be a man. I’ve always measured my success on the example you’ve provided. I love you, and I’m forever grateful for your wisdom and guidance.

Harold Reid I: I would say to my son, you are everything I could hope for or pray for in a son and I could not be more proud of you and your accomplishments, and I love you to life. “Harold be thy name”

Bredric A. Berry: I would just tell him that despite our differences of opinion, I really do appreciate and love him for being a part of my life.

Fredrick Berry: I would tell my son(s) that I love you and am very proud of the man they have become.

Jordan Bishop: I love you with all my heart. You are and will always be my biggest role model. You are the best dad a son could ever be blessed with. Thank you.

Moses Bishop: I love you, and always will.

Aaron Paxton Arnold is a keynote speaker, national media contributor and founder of MusicIsMyBusiness. He’s written for and/or appeared in Forbes, Inc., CNN, MSNBC, Fast Company and serves as a contributor for The New Kiss104.1FM morning show in Atlanta. In 2012, he was named one of 125 top alumni in Florida A&M University's 125-year history.