The right question — thoughtful, relevant, bold — can catch even the most prepared politician off guard.

It seems a generation ago, but it was just 12 years. Barack Obama was an Illinois senator who had given a memorable speech at the summer’s Democratic National Convention. John Kerry was running against the incumbent President George W. Bush. On Oct. 5 2004, at Cleveland’s Case Western Reserve University, Republican Vice President Dick Cheney and his Democratic challenger John Edwards were in a debate, and moderator Gwen Ifill asked just such an incandescent question.

“I want to talk to you about AIDS,” she said. “And not about AIDS in China or Africa, but AIDS right here in this country where black women between the ages of 25 and 44 are 13 times more likely to die of the disease than their counterparts. What should the government’s role be in helping to end the growth of this epidemic?”

Both candidates fumbled. They had forgotten those particular Americans, but Ifill remembered. And on a national stage, in a world preoccupied with a terrorist threat, her clearly spoken, well-researched words cut to the heart of the matter. That was Gwen Ifill. Among her many talents was artfully demanding truth from power.

Gwendolyn L. Ifill died this week at the age of 61. It was cancer.

So many shocked notes. So many questions. Listservs home to black journalists and women journalists asked again and again — Could it really be true that Gwen Ifill was gone? The day before she died, at a meeting of Zora’s Daughters — my Charlotte book club of black women writers and editors, most of whom knew or had worked with Ifill — our thoughts were with her as we sat around the table. We already missed her voice, and her clear-eyed vision (she went on leave in mid-May, when it was announced she’d be back in “two weeks,” and then was absent from recent election coverage). Her frankness and point of view cut through the lofty and self-centered sheen that infects too much political journalism.

“When you saw her you saw proof that work can be joy.”

In 2013, Ifill and Judy Woodruff were named co-anchors and managing editors for PBS NewsHour. It was the first time a network broadcast had a female co-anchor team. Ifill was also the host of Washington Week. NewsHour has flourished under Ifill and Woodruff. It’s impossible to imagine coverage of our current political circus without her precise, witty and knowing voice. “She was,” said Al Roker, “the rarest of journalists.” That Ifill signature is needed more than ever.

I don’t think there is a woman alive – particularly a black woman — who has not had to stare into that mirror some mornings and repeat some version of a positive mantra just to be able to face what the day will bring. The fact that Ifill went out every day and was able to be the smartest person at any table, in any room was proof that it was possible. There is a long list of reasons the words “dignity” and “integrity” surface in so many of the tributes pouring in. “She was ambitious for quality,” says David Brooks in The New York Times. “She worked for low money at PBS. She worked doggedly on her programs, and whenever I did anything that diminished the NewsHour she let me know directly.”

Ifill knew that a modest upbringing — like hers in parsonages and federally subsidized housing in several eastern cities — is not something to rise above, but rather a strength that distinguishes and informs the work. The daughter of immigrants — Panama, Barbados — she knew early on that she wanted to be a journalist in order to make sense of the world around her. In the 1960s and 1970s, with few role models who looked like her, she learned she would have to exceed expectations and surprise. She never stopped.

I’m a journalist, and in life and in work my path sometimes crossed Ifill’s. I was at my hometown’s morning paper The Sun, when Ifill was at The Baltimore Evening Sun. The number of black staffers at both papers, added together, hardly reflected the demographic makeup of the city, a fact noticed by its citizens. In 1983, black residents marched on the newspaper’s headquarters, demanding more and better coverage of their neighborhoods. To be a black journalist then was to be faced with differing demands and expectations from bosses and readers.

Though she was based in Washington and I was in the New York office, Ifill and I were also both at The New York Times in the early 1990s, a “paper of record” where, though I brought years of experience, a colleague was shocked that I, an arts section editor, was familiar with the work of Cole Porter. Through that and so many other like instances, I’ve always admired Ifill. She exemplified excellence whether reporting out a story from the floor of a convention, or showing up at the White House for a state dinner with actor/director/activist Wendell Pierce. Charlayne Hunter-Gault, a pioneering African-American journalist who paved the way before Ifill and, like her, worked at The New York Times and NewsHour, told The New York Times that she and Ifill had a “moral armor” that “served her and me well as we traversed roads not usually traversed by women who looked like us.” So when I ventured into covering culture, race and politics, I had my model in Gwen.

On Wednesday, Ifill was scheduled to be presented with the John Chancellor Award for Excellence in Journalism by Columbia University’s Graduate School of Journalism, the first African-American to receive the award in its 21-year history. Like Michelle Obama, Ifill was an African-American woman who achieved but wore her more than 20 honorary doctorates, countless awards and many, many accomplishments lightly. And like the first lady, Ifill withstood complaints and comments meant to put her in her place — and then triumphed. A note from a co-worker at the Boston Herald-American (when she was an intern there) told her, with a slur to “go home.” She didn’t, and took a job when the paper offered it. To those who questioned in 2008, if a black journalist could be fair when covering a black political candidate, she had a simple answer: “No one’s ever assumed a white reporter can’t cover a white candidate.”

And when broadcaster Don Imus – who once insulted her not because of what she did but because of who she was – in 2007 turned his gaze to the Scarlet Knights of Rutgers University, who’d made an improbable run to the women’s basketball championship game, Ifill had an answer: “This country will only flourish once we consistently learn to applaud and encourage the young people who have to work harder just to achieve balance on the unequal playing field. Let’s see if we can manage to build them up and reward them, rather than opting for the cheapest, easiest, most despicable shots.” She might well have been talking about her own tough, go-for-broke journey.

I valued our occasional conversations through the years: at National Association of Black Journalists conventions; at a Nieman Foundation gathering at Harvard in my 2006 Nieman year, when as guest of honor Ifill profoundly impressed the group, pushing back when one editor made the assumption that the 1960s civil rights movement had had the support of all Americans. Ifill reminded him that that was hardly the case and gently encouraged him to do his homework. At a rally during Hillary Clinton’s 2008 run, I spotted Ifill and made sure to stay close — the better to hear every aside and observation.

I’m hardly alone. Ellen Rolfes, a producer at The Greene Space at WNYC and WQXR, was multimedia editor at PBS NewsHour and worked with Ifill there. “In the editorial meetings every morning she demanded excellence and brought perspective that I admired,” Rolfes, 28, said. “She challenged people’s ideas and pitches. Her humor and wit was sharp as a knife. She laughed with her whole being and she was fearless [or at least seemed that way to me].”

To Patrice Gaines, 67, author and former Washington Post reporter, Ifill was one of the “youngsters” at the Post. “Life is funny,” Gaines said. “The younger one can become better at something than the older one and the older one doesn’t give a damn ’cause excellence has no age and it’s just a privilege to bear witness to. I came to admire her professionally, her tenacity and determination to always be better. When you saw her you saw proof that work can be joy.” 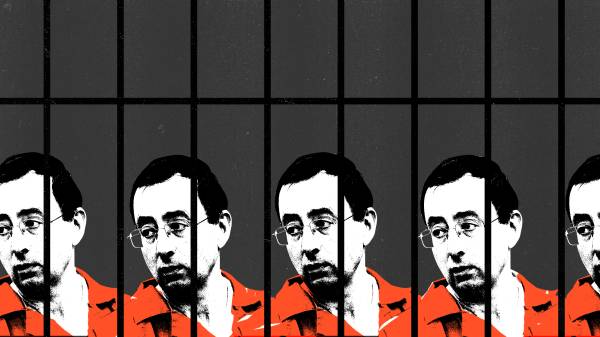 Why aren’t Nassar’s enablers going to prison, too? Read now

And at a time when the president of the United States was processing the results of a history-making election, he made time at the start of a recent news conference to pay tribute: “She always kept faith with the fundamental responsibilities of her profession — asking tough questions, holding people in power accountable, and defending a strong and free press that makes our democracy work,” he said. “I always appreciated Gwen’s reporting, even when I was at the receiving end of one of her tough and thorough interviews … she not only informed today’s citizens, but she also inspired tomorrow’s journalists.”

When I introduced my sister to Ifill at a White House event, the famous journalist made time to chat with her, and it was a genuine conversation, more than small talk. I was not surprised, but my sister was, that the woman she saw on TV was so down-to-earth. Ifill told my sister Janice, “I noticed you before; you were really working the room.” And they both had a good laugh. Moments after news of Ifill’s death that sister and I spoke on the phone. She felt as though she had lost a friend, someone who cared and made sense of a complicated world.

Mary C. Curtis, columnist for Roll Call and NBCBLK and contributor to NPR, has worked at The New York Times, The Baltimore Sun and The Charlotte Observer. She is a child of West Baltimore, based in Charlotte, N.C., and can sing the entire score of “Hamilton.”

This Story Tagged: Rest In Peace An Appreciation Gwen Ifill