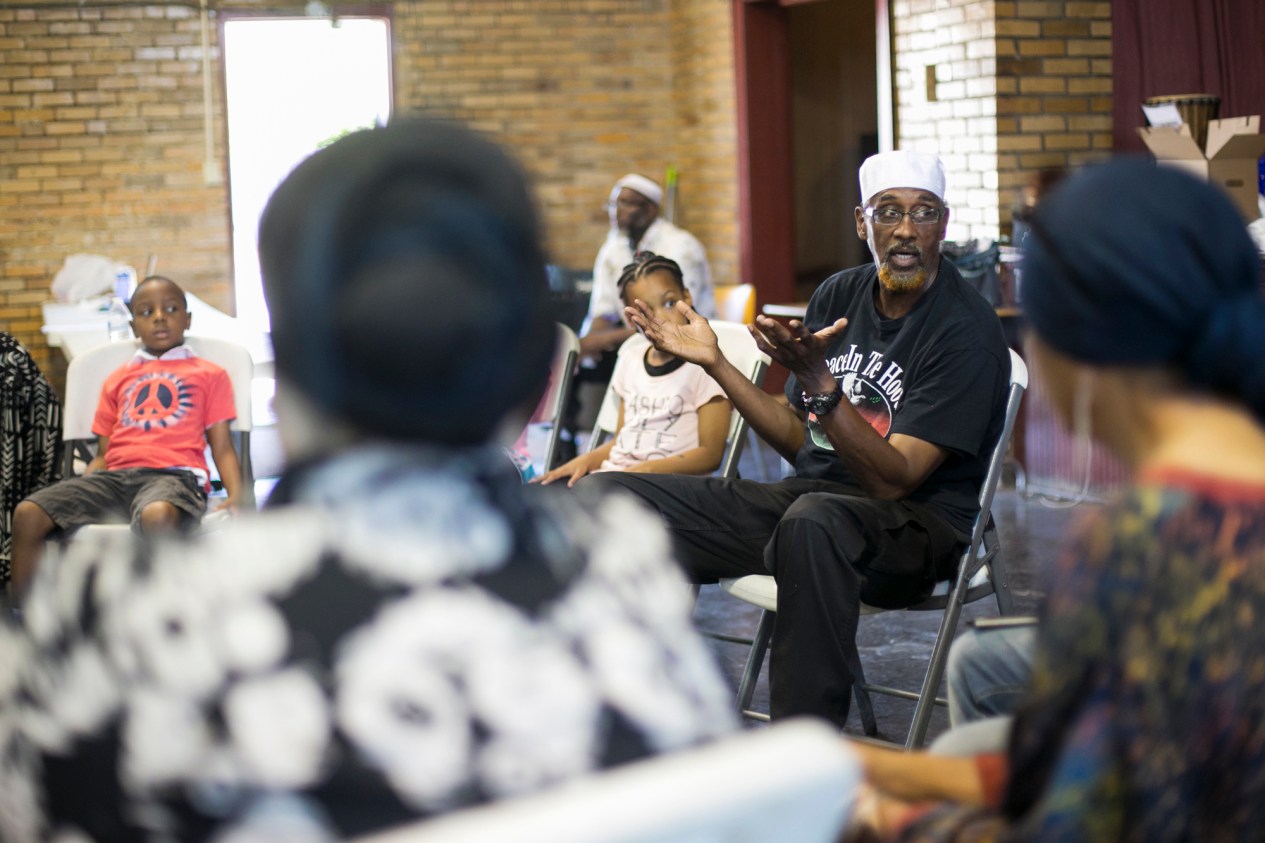 Khalid Samad address a peace camp at a Masonic Hall in Cleveland, OH on Tuesday, July 19, 2016. Samad is a founder of Peace in the Hood, a youth violence, prevention, intervention and educational program that promotes personal responsibility, empowerment and self-sufficiency Maddie McGarvey for The Undefeated
Republican National Convention

In this part of Cleveland, ‘Make America Safe Again’ means nothing

It was supposed to be just another day at Peace Camp, an annual summer program that brings together kids from several of Cleveland’s inner-city neighborhoods to learn about job readiness, financial literacy and the value of entrepreneurship. Instead, they were attending an impromptu vigil.

Around 8 p.m. Sunday, as the Republican national convention was getting underway downtown, Phillip Banks, 19, was murdered in a drive-by shooting at a Stop the Violence Beach Party along the lakefront. A 12-year-old was struck in the back, but survived.

“Everyone in here who is 12, raise your hand,” requested Amir El-Hajj Khalid A. Samad, who runs the camp as part of his community program, Peace in the Hood. You’re not supposed to ponder death as a 12-year-old. But that luxury isn’t afforded in this room. “This is how real it is. This is what we’re dealing with.”

“Make America Safe Again” was the first day’s theme at the convention. That phrase sounds different here at the York Masonic Temple, seven miles from the convention site. Samad was originally scheduled to speak Tuesday morning in the official protest area near Quicken Loans Arena. He canceled to be with the campers as they shared stories of how they learned about the shooting.

Many of them knew Banks and heard about his death through word of mouth or social media. One young woman read a tweet from the alleged shooter, who said he would shoot the party up.

Samad asks why. No one answers.

The $50 million renovation of Public Square in downtown Cleveland took 15 months to complete. This is where protest speakers gather to deliver speeches in 30-minute intervals during the convention. A five-minute car ride away in Playhouse Square hovers what is allegedly the world’s largest chandelier. The 8,500-pound outdoor lighting fixture cost roughly $1.2 million, part of a $16 million streetscape improvement in the area.

Samad and his older campers don’t understand how nearly $70 million could go to downtown restoration while their communities suffer. A ride up and down Kinsman Road shows a street littered with abandoned houses.

“I feel as if they’re wasting that,” said Isiah Ford, leaning back in his chair and lifting his Air Jordan Bred 11s off the floor. “They wasting money on nothing. It’s irrelevant. Like what we need that for? What’s the point? What is it doing for us?”

The room becomes more and more engaged as each camper speaks.

“When I talk about downtown, I think of it like them throwing a big rug over everything. You know, like how you sweep stuff under the rug and try to cover it up? Like when company comes over?” camper Nadia Loftus said, tossing her braids from her shoulder to her back. “That’s what they doing with Cleveland. They trying to fix up downtown so the rest of the stuff that’s going on past there don’t really matter.”

Samad stood in the corner allowing the young men and women to talk. It’s a form of therapy, whether they realize it or not.

“With the downtown situation, they wasting money. Well, I wouldn’t say wasting money because it’s a lot of people from out of town like, ‘Wow, this is nice. I like this. I wanna come out here every day,’ ” said Leandrah Ford. “But it’s like with us being used to it, our streets, like, you rode down 131st to get here? Prime example. The streets are raggedy. I wouldn’t say it should all go to downtown. I think they should be able to know already to help what need to be helped. And what they just wasting they time on, for real, for real.”

The dialogue continues for another 10 minutes. The campers, many of whom are either entering their final year of high school or preparing to head off to college in a few weeks, go back and forth about downtown and subpar conditions in their schools. In struggle, they’ve grown stronger. They are, as one camper says, “a family.”

After a 25-minute discussion, Samad instructed the campers to clean up. It’s almost time to go home. But for Samad, it’s time to speak his mind.

Samad sat at a desk toward the back of a room, dressed in black combat boots, black cargo pants and a black “Peace In The Hood” T-shirt. A bladeless fan runs on high behind him as 3-year-old Jamal Myles sleeps on a blanket on the carpeted floor. His stepfather, brother and stepbrother are part of Peace.

Samad, 64, is a native Clevelander who served as a gang prevention specialist for the Cleveland Board of Education Gang Task Force from 1991 until 2000. His work in the community, much of which involved brokering truces between rival gangs and unofficially adopting many local kids as his own, earned him induction into the city’s International Hall of Fame this year. Cleveland.com named him one of its Community Heroes in 2011.

He fears the fall campaign will bring widespread dissemination of misinformation – about his community, about his Islamic faith and about the struggle between communities of color and law enforcement. Regardless of who becomes the 45th president, Samad’s hope is that entrepreneurship in the black community, one of the pillars of Peace In The Hood, will allow black men and women to realize the power of their dollar and keep it within the community to “train our people to manifest their own greatness.”

Decades of experience provide the conviction in his voice. But conviction alone doesn’t pay the bills. Peace In The Hood had $91,000 in revenue in 2013, according to IRS records. It has three full-time employees and a host of part-timers.

“Once again, it’s the resources,” he said, lightly slamming his fist on the desk. “It’s the resources that sit in the state capital and in these corporate and philanthropic circles that don’t really understand what we’re talking about and are too arrogant to say I don’t understand.

Insanity comes in many forms. The spirit of Tamir Rice is never far from the city’s consciousness when dealing with issues of community relations and law enforcement. Rice is the 12-year-old infamously killed in November 2014 by police who thought the replica gun Rice was playing with was a real weapon. Neither of the officers involved, Timothy Loehmann and Frank Garmback, faced charges.

“A lot of young people are crystal clear about the dynamics of so-called police-community relations. They’re not judging all white officers because, c’mon, there’s a lot of good white officers,” Samad said. “The young people have been conditioned enough to know when they’re around white officers to be careful, be cautious, because any split second move could cost them their life. As it was in Tamir’s situation.”

Rice’s story is only a new installment in the city’s tense history of race relations. However, when discussing Tamir – “All they had to do was pull up at the top of that hill and call out to Tamir saying, ‘Let me see your hands and get down on the ground.’ He would’ve been alive and they wouldn’t be looked at as the clowns and dummies that they were” – he simultaneously shoots down detractors who say crime is a nonissue in the black community.

“Whenever an African-American is murdered in this city, we have collaborating partners, we take the lead on a lot of that stuff, we contact the family members. We arrange for a rally or a vigil because we don’t want people to think these things are normal,” he said. “They’re abnormal.”

As he gets up to leave, he returns again to the convention his city proudly hosts. The kids have long since left. He took genuine offense at the theme of the convention’s first day, “Make America Safe Again.”

It’s hard to understand how to make a country safe again when, in many ways, it never was for people who looked like him.

“If they don’t stop this rhetoric, and stop this bulls— talking, man, and sit down with the real leaders of urban America – which they have not done with the president on down – they’re gonna be responsible, man, for ushering in one of the worst eras of urban strife, violence and bloodshed this country has ever experienced.”