‘Insecure’ is actually very secure in itself — and secure at HBO

Along with Donald’s ‘Atlanta,’ Rae and ‘Insecure’ represent the promise and the contradictions of Obama’s America

There’s an intimacy to Insecure, which just wrapped up its eight-episode first season run on HBO Sunday night. It’s evident in the chatter that took over social media, where viewers made their declarations of Team Issa or Team Lawrence known to all, and it became clear that Issa, Lawrence and Molly had grabbed them and earned their emotional investment.

That intimacy and the emotional investment it netted came directly from Insecure co-creator and executive producer Issa Rae, who peeled off another uncomfortable, sometimes unflattering, layer of herself and injected it into the show. She wrote about struggling with chronic cheating, as her Insecure character of the same first name does, in her 2015 memoir The Misadventures of Awkward Black Girl.

“For one thing, I didn’t want to be feel attached to any one person, after witnessing my mother’s feelings of betrayal and violation in light of my father’s affair,” Rae wrote. “In my mind, it was cheat or be cheated on, and I felt a sense of satisfaction knowing that I had beat my partner to the punch, whether he knew it or not. That way, if he decided to cheat, then I would be numb to it because I had done it first. It’s a really juvenile way of thinking, an emotional escape route that would allow me to leave with just the clothes on my back when necessary.”

Unlike Rae, Issa’s cheating stems from her own feelings of uncertainty as she crosses into her 30s and begins questioning her relationship with her live-in boyfriend, Lawrence, and her life and adult decisions in general. As the show progressed, it was also possible to see how Rae advanced as a writer, broadening the scope of the show beyond just Issa, Molly and Lawrence, and pushing the boundaries of their world. In a sense, what we witnessed this season was a show creator spreading her wings upon the realization that she’s got some money to spend, and the freedom that comes with it, alongside the growing self-awareness of her central character.

Rae and Glover are part of the Obama legacy. It’s not as easily quantified, but it’s an aspect of his legacy that cannot be easily unraveled.

“There was a point where we were writing where it still felt very claustrophobic,” Rae said during a recent interview at HBO’s New York offices. “They’ve definitely given a, ‘Hey, it’s HBO, you can — there can be more sex if you want,’ then they were like, ‘Whoa! Too much sex, that’s too much.’ It sounds so obvious now but … that’s also the nature of having a new show. There’s so many places you can go — you can go everywhere — and that’s the scariest part.” 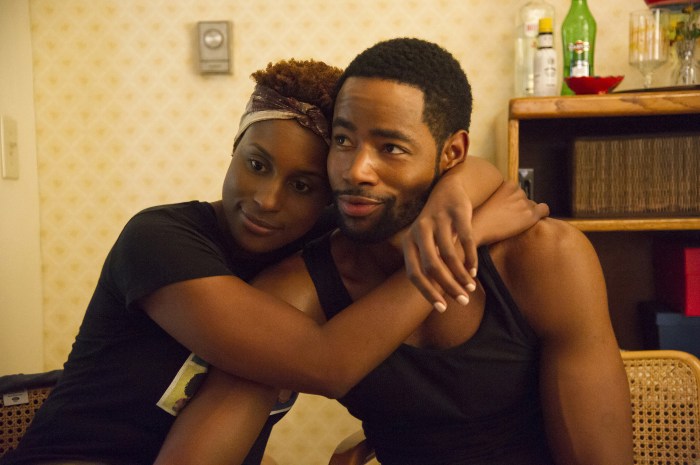 It wasn’t that long ago that Rae decided to reveal a bit of herself to the world as an awkward caricature of herself named J in the web series The Misadventures of Awkward Black Girl. Among the things we learned? That J, like her real-life progenitor Rae, was an enormous Donald Glover fan. So it felt appropriate, just right, somehow, that Rae’s journey from internet creator to television star, writer and executive producer would crest during the same television season that Glover, who made a cameo as himself in an Awkward Black Girl episode, debuted his own new series, Atlanta. Not only would Glover and Rae be television contemporaries, but there was room enough for them both to exist at the same time, telling different stories about black millennials. They weren’t tokens. They were regular.

Rae and Insecure represent the promise and the contradictions of Obama’s America. It’s an America where the daughter of well-to-do Senegalese immigrants can work her butt off as an outsider and rise to acclaim thanks to a loyal fan base cultivated on the internet and start to change the establishment — in this case HBO — from within. But it’s also an America where that same daughter decided to use her platform to raise more than $700,000 for the children of Alton Sterling after he was shot and killed by police in a Baton Rouge, Louisiana, parking lot this summer.

Not only would Glover and Rae be television contemporaries, but there was room enough for them both to exist at the same time, telling different stories about black millennials. They weren’t tokens. They were regular.

Following Sterling’s death, Rae was on a text chain with several friends, who like her, felt frustrated and disaffected. “They were mad about having to be at work with their oblivious white co-workers who were living in willful ignorance,” Rae said. “And also being like, ‘I just want to do something.’ I remember just reading those text messages and just feeling down and annoyed, just being in the bathroom thinking about his kids, and it was like, ‘Oh, he was a father. At the very least someone should start a scholarship fund for his kids.’ ”

When she made the suggestion on Twitter, she heard back quickly from Dear White People director Justin Simien, Insecure actor Jay Ellis and Master of None actress Lena Waithe. “Everybody felt tired and I think that’s why it was so successful at the time, because we don’t know what to do but we know that we can do something with our dollars, and that’s the easiest way,” Rae said. “It’s something small. I feel like I did what anybody else would do and anybody else did do.”

Glover and Atlanta exemplified the twisted nature of Obama’s America, too — Atlanta, like Insecure, was one of the most highly anticipated and well-liked new shows of the 2016 season, thanks in part because it expanded representations of blackness on television. It also closed with its central characters witnessing a police shooting.

The rise of artists such as Rae and Glover is part of the Obama legacy. That rise didn’t just occur during his presidency — it felt fueled by the promise of it. It’s not as easily quantified, but it’s an aspect of his legacy that cannot be so easily unraveled with legislative maneuvers as the Affordable Care Act, or undone with a presidential pen stroke like Deferred Action for Childhood Arrivals. The presence of the Obama family in the White House, simply being themselves, was a forceful, influential endorsement of artists of color as central to the fabric of American culture.

Insecure, like Atlanta, has already been renewed for a second season. One of its writers, Natasha Rothwell, who also played Kelli in four episodes, has been promoted to series regular for season two. Rothwell’s been promoted in the writers’ room, as well, from story editor to executive story editor. Additionally, Rothwell landed a development deal with the network for a comedy of her own, which she’ll write and star in, too. And so, even as a nation steels itself for the Age of Anxiety already upon us, Insecure and Atlanta remain small beacons of delight that we know will meet us next fall, when a weekly half-hour of escape may be greeted as welcome and essential respite from the drudgery of the real world.

“In my mind, it was cheat or be cheated on, and I felt a sense of satisfaction knowing that I had beat my partner to the punch.” — Issa Rae

Those renewals are meaningful as we wait to see how television will react and reposition itself to appear more accommodating to Trump’s America. Variety’s Mo Ryan, echoing a debate that’s roiling within the Democratic Party itself, recently penned an entreaty to network executives asking them not to roll over on wins for diversity and inclusion, but rather to keep pushing forward. There’s no certainty that will happen, and it may be that television, too, will contort itself as the news media has, into chasing after the white working class. The chance to press television gatekeepers about their plans is further off than usual, considering how many of them have bowed out of the question-taking duties for the upcoming Television Critics Association press tour in January. Executives from ABC, FOX, CBS, and NBC have all decided not to attend. Perhaps it’s not the case, but it appears none of them are particularly jazzed about answering questions about doubling down on a television landscape reflective of the entire country in the age of an incoming president with a White House counsel whose last job was running a platform for white nationalism and misogyny.

Part of what’s so special about Insecure is its depiction of middle class, upwardly mobile black millennials as normal and unremarkable. The central conflicts Issa faces — about her job, her friendships, her relationship — are all ordinary stories. There’s no fantastical, melodramatic peg. Instead, it feels like an honest, contemporary reflection, warts and all, in a way Living Single did in the 1990s, told with skill and care, from its characters to its storylines to its Solange Knowles-curated soundtrack. Black women go shopping and try cocktail dresses on backward just like Tina and Amy. Insecure, together with Atlanta, provide bookends for a pop culture portrait of a generation. Rae’s integrated the elements of young, modern black life seamlessly into television in a way that speaks to the audience that’s stuck with her since the Awkward Black Girl days, allowing it to proclaim, “It us!” They’re like black internet easter eggs — an Amanda Seales here, a Luvvie Giver of No Dambs T-shirt there.

Rae’s not the not the only one who does this. Writer-director Patrik-Ian Polk included a cameo of Bassey Ikpi in his 2012 film The Skinny. Tahir Jetter’s depiction of young black Brooklyn in How to Tell You’re a Douchebag included a character played by DeWanda Wise who calls back to News One Vice President Jamilah Lemieux’s days at Ebony. New York Magazine writer Rembert Browne actually made a cameo in the film. This is a community built on the internet, spread across the country, come to life on screen. In an age in which American society seems more divided than ever, the uncompromised and influential vision of black humanity in Insecure may be exactly what we need.