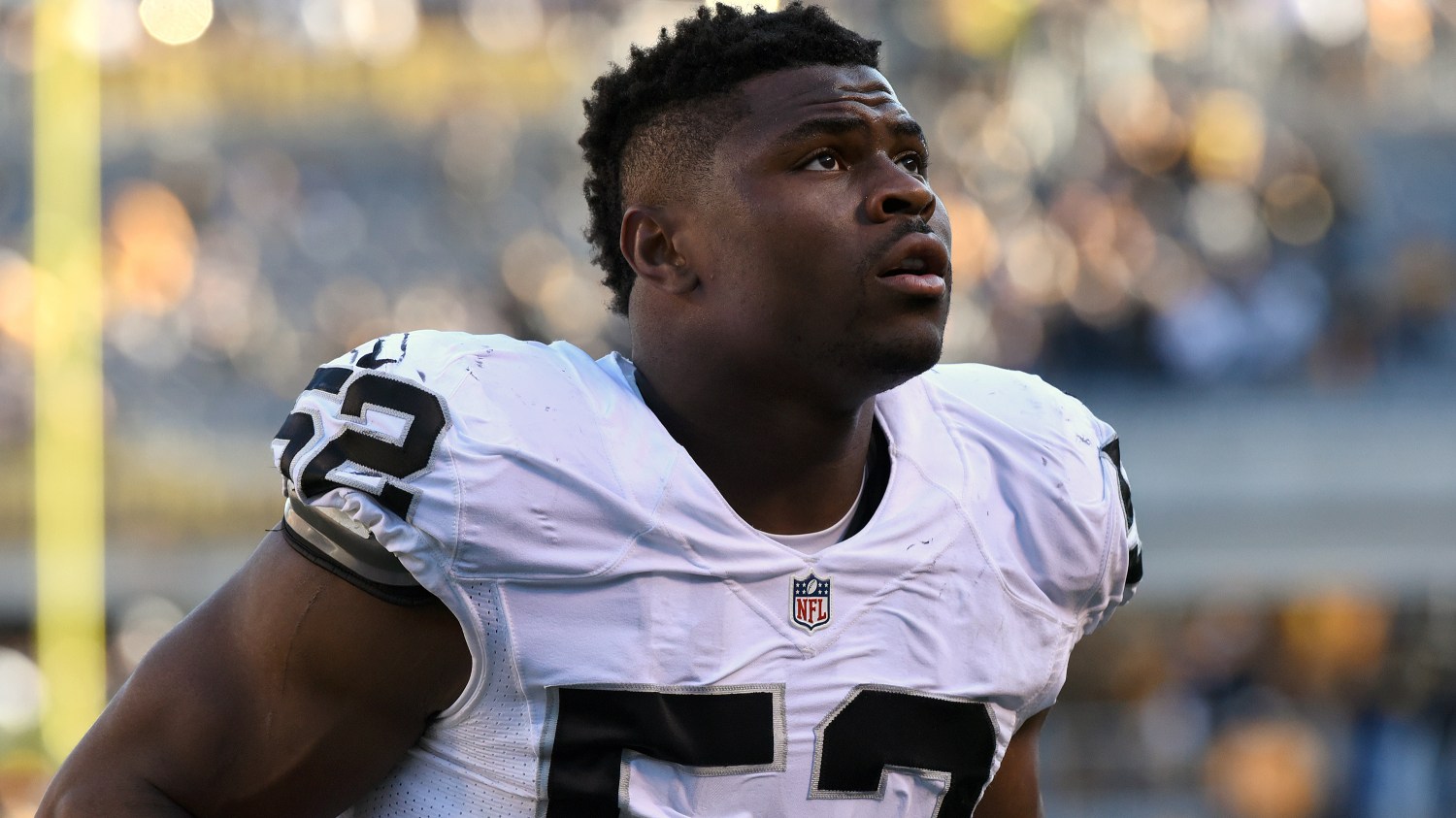 Defensive lineman Khalil Mack #52 of the Oakland Raiders looks on from the field during a game against the Pittsburgh Steelers at Heinz Field on November 8, 2015 in Pittsburgh, Pennsylvania. The Steelers defeated the Raiders 38-35. George Gojkovich/Getty Images
NFL

The Raiders defensive end and outside linebacker may be off to a slow start this year, but there’s no denying his talent

London Fletcher couldn’t believe he was about to go there. It used to be that if reporters asked the former Pro Bowl linebacker to compare up-and-coming players with Hall of Famers, he’d shut them down quicker than ball carriers foolish enough to run at him. Over a 16-year NFL career, Fletcher never got caught up in the hype. But now Fletcher was about to break his own rule.

Toward the end of an interview Monday about Khalil Mack, the Oakland Raiders’ outstanding third-year defensive end/outside linebacker, Fletcher delivered the money quote. “You can compare him to L.T.,” he said.

“Yeah. You heard me,” Fletcher said. “You know me, so you know I’m hesitant to say that. But, yeah, L.T. He did it for so long. And not just for so long, also the way L.T. did it. But you look at the film, there are similarities. So many similarities.”

By dropping those initials, Fletcher essentially dropped the mic.

For a defensive player, there’s no higher praise than to have your performance compared favorably with that of Taylor, the onetime iconic outside linebacker who helped the Giants win two Super Bowls. The thing is, Fletcher’s assessment seems right on point. Mack is that good.

“He’s relentless. For a kid, and you have to remember he’s still a kid, his strength is just phenomenal.”

At only 25, Mack has rocketed to stardom. Following a strong rookie year, he changed positions in 2015 and emerged as one of the game’s most productive pass-rushers. Even long-suffering Raiders fans have hope again. Oakland actually expects its playoff drought to end after 14 seasons, and Mack is at the forefront of the revival. He wouldn’t want it any other way.

“We can’t waste any time,” Mack told The Undefeated recently at the Raiders’ training facility in Alameda, California. “We’re trying to get good right now. Today. Not tomorrow. So you just go out and do it.”

Time after time, Fletcher stopped the film to focus on No. 52. He had to make sure his eyes weren’t deceiving him.

“What jumps out at you, what you really see on the film, is just how explosive and strong he is,” said Fletcher, now a CBS Sports analyst. “He has that strong lower body. He’s able to really get underneath pass-blockers. He’s relentless. For a kid, and you have to remember he’s still a kid, his strength is just phenomenal.

Last season, Mack finished second in the NFL with 15 sacks. No player had more sacks in one game than the five he totaled in Week 14 against the Denver Broncos. A deeper dive into the numbers further supports Fletcher’s position.

Mack had 39.5 percent (15-of-38) of Oakland’s sacks. Only Robert Ayers of the Giants (41.3) had a higher percentage of one team’s sacks, according to ESPN’s Stats & Information. Mack also had 17 disrupted dropbacks (sacks, interceptions, batted passes and passes defended). That was the eighth-highest total. All numbers that add up to one thing: dominance.

Mack became the first player named an Associated Press first-team All-Pro at two positions — defensive end and outside linebacker — in the same season. Raiders head coach Jack Del Rio wasn’t surprised. “First, he’s got the natural ability,” Del Rio said. “And guys who have that natural gift, and work as hard as he does, will typically continue to improve. I thought he was that kind of player coming out of the draft.”

Shortly after the Raiders hired Del Rio in January 2015, he met with Mack to discuss changing his position. It turned out to be a monologue more than a discussion.

Both Del Rio and new Oakland defensive coordinator Ken Norton Jr. had been Pro Bowl linebackers. Although Mack was impressive as an outside linebacker, especially against the run, after Oakland selected him with the fifth overall pick in the 2014 draft, Del Rio and Norton had other ideas. As a hand-down right end who rarely dropped into coverage, Del Rio explained, Mack could make a bigger impact for the Raiders. That’s all Mack needed to hear.

“You’ve got a love for the game. And whatever you can do to help your team win, because that’s what it’s about, do it to the best of your ability,” Mack said. “You always want to make that statement. Coach Jack came in and put me in that position.

“It was positive for me because I love to go forward, rush the quarterback and wreak havoc in the backfield. It’s just a love for me. So the switch really wasn’t even a switch for me, at least not mentally. It was just freeing me up to go forward a lot more.”

Mack credits Raiders defensive line coach Jethro Franklin with his continued development. Each day after practice, they carve out time to refine Mack’s pass-rushing technique, everything from footwork, hand placement and leverage. And Mack is still rock solid against the run. It’s pretty much unfolding just as Del Rio envisioned.

“He really made a big step last year in his understanding of how to rush and finish, and Coach Franklin working with him on different rush moves has really helped,” Del Rio said. “Because he’s such a powerful guy, stacking up the run comes very natural for him. The area where we should continue to see growth is in his skill level at rushing the passer. It becomes more innate as you get reps. And he’s definitely working at his trade.”

That being said, the Raiders aren’t exactly off to a fast start — Mack or no Mack.

Through two games, Oakland (1-1) has given up a whopping 1,014 net yards. Opponents are averaging 34.5 points. Part of the problem is that Mack has no sacks.

Clearly, Del Rio and Norton have some fine-tuning to do on defense. Not surprisingly, Mack has taken responsibility for the slow start. He plans to do more.

“I’m just always thinking about what I can do as a leader on this team,” Mack said. “That’s what I have to do.”

The Raiders aren’t concerned about Mack. After all, even L.T. had quiet stretches early in his career. Well, every once in a while, anyway.

“It’s not about one or two games – it’s about the whole season,” Fletcher said. “Over a whole season, there just aren’t a lot of football players who can do all the things he does, and at the level he does. Those are the guys you want.”

Mack is the right guy for the Raiders. And before he’s finished, he may be a guy who winds up in the same class as Taylor. Or at least closer to it than anyone else.