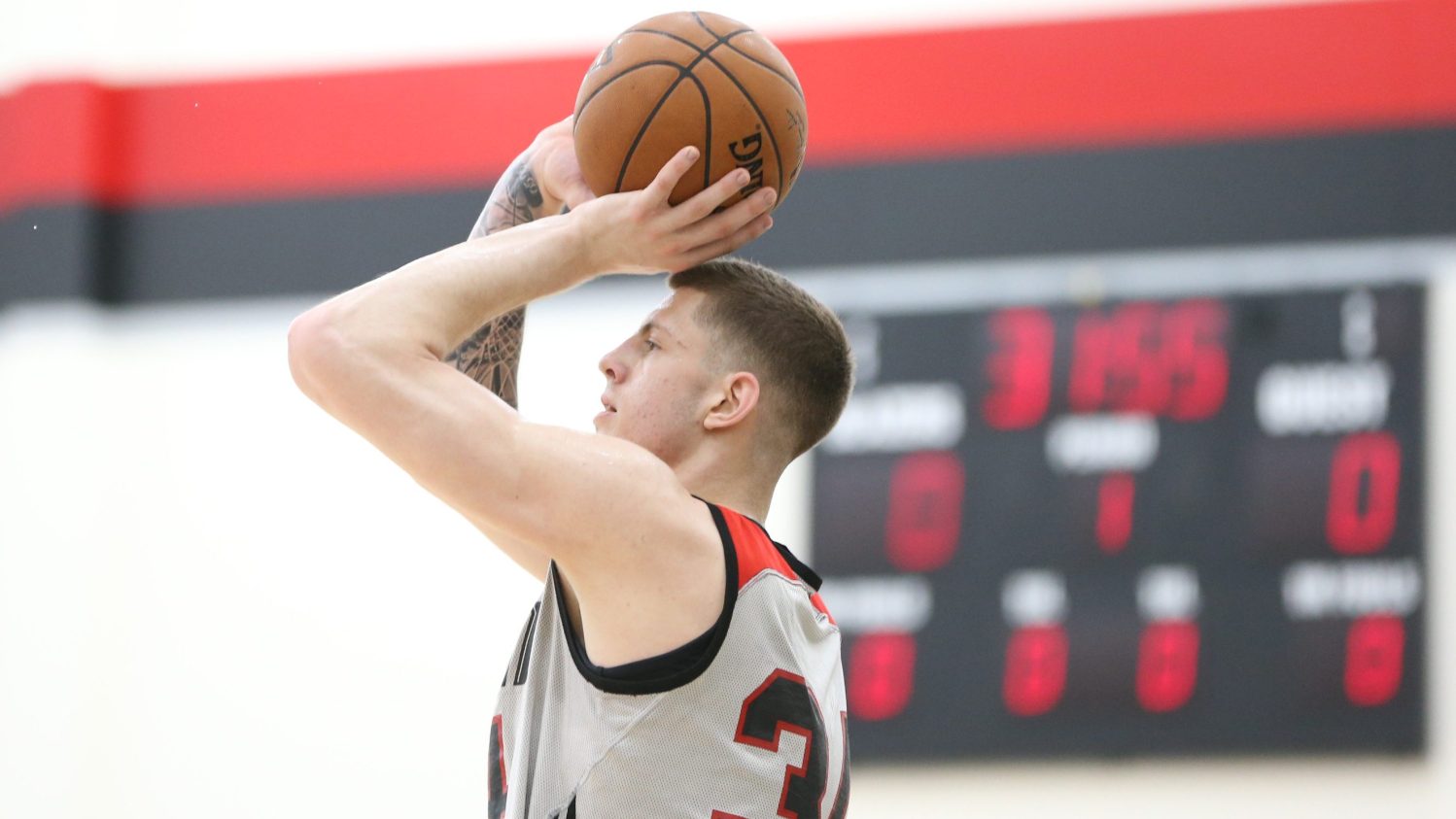 There’s more to Isaiah Hartenstein than meets the eye

Looks are deceiving when it comes to NBA draft prospect Isaiah Hartenstein.

The 19-year-old looks much more like Kevin Love than Kevin Durant. The German last name adds to the assumption that he is a white teenager. But the 7-foot, 220-pounder is black, to the surprise of many he has encountered.

“When they look at my basketball game, they kind of see it a little bit,” Hartenstein told The Undefeated. “It’s OK. I know I am half-black, but you can’t really see by my skin tone. Sometimes they laugh and say, ‘It’s not possible.’ And then they see my dad and kind of say, ‘OK, we understand.’ ”

Hartenstein is the son of Florian Hartenstein, a former University of Oregon center. Florian’s father is an African-American who met Florian’s mother in Germany while serving in the U.S. military. Florian said as a kid growing up in Germany, he heard some racist words against blacks.

“In Germany, especially when I was little, it was a little bit more [racist],” Florian Hartenstein said. “Germans had a word for black, a racial name in German that I didn’t realize until later on. Other than that, I didn’t have too much of a problem.”

Isaiah Hartenstein was born on May 5, 1998, in Eugene, Oregon, and favors his mother, Theresa, who is white and from Oregon. Isaiah spent the first 11 years of his life in Eugene before his family moved to Germany, where his dad enjoyed a successful basketball career as a professional player and a coach. Isaiah Hartenstein learned the German language quickly after the family moved and eventually grew into a talented basketball player who first played for Germany on its under-16 team in 2014. Hartenstein has U.S. and German passports and represented the World Team in the Hoop Summit in April.

Florian Hartenstein developed his son to be something he wasn’t as a basketball player: versatile.

“I used to be a general role player who set screens, rebounds,” Florian Hartenstein said. “I wanted him to be the opposite of what I used to be. I had a chance to work him because I was his coach for three years. I tried to get him to play on the perimeter. He has both inside and outside game.

“In Germany, I was lucky that we had our own gym so we could go in the gym and work out. I put him at a guard position as a big man so he can work on dribbling, passing more. I think it helped him later on to be more versatile.”

Florian Hartenstein said that on many occasions people didn’t believe that Isaiah was his son because of his skin color and looks. Fortunately for all involved, no one turned their confusion into disrespect.

“Sometimes they say we are not related because they say I look blacker than he does, but when they look closer …,” Florian Hartenstein said. “It’s funny when you see our kid pictures, pulling up my picture and his picture as a kid, we look alike and he basically was a lighter version of me. Some people question the situation, but once they get to know us they see that we are family.

“Since I am tall and he’s tall, no one wants to cross that line. So we haven’t had any problems.”

Florian Hartenstein taught his son African-American history. There were a lot of lessons about Martin Luther King Jr.’s teachings and the civil rights movement. Isaiah Hartenstein’s parents also taught him to see people as people. He is a big fan of King and says it’s important to “respect every culture.”

“From the Martin Luther King days, I just learned how everyone stuck together for one movement,” he said. “To see how far it came from one person speaking out loud and having the guts to speak out, I’m really happy and blessed that he did that. My mom and dad probably wouldn’t have ever met [otherwise].

“I’m blessed for not only what he did [for black] culture, but for every culture. [King] really brought everyone together, and that is a real blessing.”

Isaiah Hartenstein has confronted people who have said racist things about blacks who didn’t know he was black. He questions anything racist he hears.

“I tell them that it is not right what they are saying,” Hartenstein said. “Even if I wasn’t part black, it’s not right. Everyone is their own person. It’s not about skin color. It’s about your personality, what’s inside.

“Saying stuff like that is not mature. It’s childish. To me, I don’t like people [who are racist], not about our heritage, Jews, whites, Chinese. No matter what, you should respect every culture.”

We break down the 10th through 6th potential picks of the NBA draft.

Hartenstein made a name for himself starring for Lithuania Zalgiris Kaunas at the Adidas Next Generation Tournament last year and also playing for the World team in the Hoop Summit. He played sparingly for Euroleague power Zalgiris Kaunas’ top team, averaging 4.2 points and 3.3 rebounds over 11.5 minutes per game last season. After Zalgiris Kaunas won the 2017 Lithuanian championship recently, Hartenstein arrived in the United States on June 15, a week before the draft, to work out for teams. He is a late first-round prospect.

“It was an up-and-down season. I learned a lot about being a professional athlete on and off the court. … It wasn’t the best of seasons for me, but I learned a lot,” Hartenstein said.

Hartenstein said he never faced any racism while playing in Lithuania, but that changed over the weekend. After a disappointing postseason, Lithuania BC Lietuvos Rytas owner Gedvydas Vainauskas made racist comments about black basketball players during a videotaped interview with FIBA.com.

“We’ve always held a stance that there shouldn’t be more than two black players on the team,” Vainauskas said. “What happened was that coach Tomas Pacesas likes to play with black players — to control them, to teach them, to tutor them — and we ended up with four players that are black. All of a sudden, they came together to form … how should I put it … a sort of a gang.

One of BC Lietuvos’ players was former NBA forward Drew Gordon, the brother of Orlando Magic forward Aaron Gordon. FIBA.com later edited Vainauskas’ racist comments out of the video. Vainauskas would later put out a statement saying he was “improperly understood.”

“That’s racist. I don’t think that’s a good thing, especially from a person like that who owns a team. First of all, it’s inappropriate. Second of all, it’s also not the truth,” Hartenstein said.

The National Basketball Players Association, in a statement issued Tuesday, asked for FIBA to take action on Vainauskas.

“The comments made by BC Lietuvos Rytas’ President Gedvydas Vainauskas on Friday are as stupid as they are offensive. Basketball is an institution that unites people around the world and it saddens us to see it tarnished by such racism. Unfortunately, this serves as a reminder of just how far we still must go in ridding the basketball community, and our society as a whole, of such hateful sentiments,” the NPBA statement read. Vainauskas stepped down as president of the team on Wednesday.

About a dozen NBA teams attended a workout for Hartenstein hosted by his agency Wasserman Group in Santa Monica, California, on June 17. He worked out for the Portland Trail Blazers, who have three first-round picks, on Monday. Hartenstein’s agent, B.J. Armstrong, said his client was expected to work out for two NBA teams in New York before the draft.

“He has good size and athleticism,” one NBA general manager said of Hartenstein. “He has a lot of upside. He is a good future prospect. He has a chance to be a contributing NBA player. People are looking at him late first, early second [round].”

Hartenstein is quite comfortable being in the United States again after spending more than half of his life in this country. His father hopes that the racism that has plagued America doesn’t come his mixed family’s way now that they are back.

“Since he is not as black as most of the guys, he actually has to fight for it and say, ‘I actually am black,’ ” Florian Hartenstein said of his son. “More people think he is white. He is proud to be black. In Germany, there is some racial issues that have calmed down a lot. I don’t think it is as extreme as it is here in America.”