It’s not about you, Lena Dunham; it never was

It took all of 24 hours for Lena Dunham, creator and writer of the HBO series Girls, to cause a ruckus, take some heat, become defensive about her actions, then issue an apology.

Four months ago, Dunham attended the star-studded Met Gala, an uber-exclusive event where she was seated beside New York Giants wide receiver Odell Beckham Jr. While this was a glaring example of privilege in and of itself, Dunham wasn’t satisfied. According to Dunham, Beckham had no conversation for her during their time together, and she apparently took it personally and made it all about her when, in fact, it wasn’t.

Dunham chronicled her thoughts about the event with her friend, comedian and actress Amy Schumer, in the Lenny Letter, which was published Sept. 2. Why Dunham is still fixated on this interaction months later isn’t at all apparent. What is, however, is that it is cringe-worthy, to say the least. 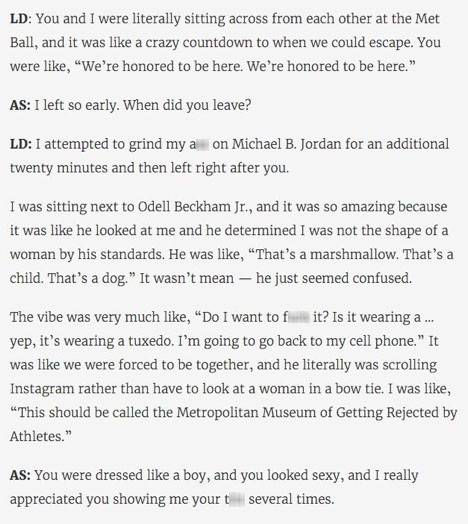 Social media quickly reacted. Dunham initially responded to the uproar in a series of tweets:

“.@OBJ_3 is talented, stylish, seems super awesome and wasn’t into chatting with me at a fancy party. My story about him was clearly (to me) about my own insecurities as an average-bodied woman at a table of supermodels & athletes. It’s not an assumption about who he is or an expectation of sexual attention. It’s my sense of humor, which has kept me alive for 30 years. Glad the outrage machine roars on though, right @amyschumer?”

Let’s break this down. First, Dunham had attempted to “grind her a–” on actor Michael B. Jordan “for another 20 minutes.” Not one song. Twenty minutes. When called out about this, her response was:

ps I'll try and dance myself onto @michaelb4jordan if I have the chance, even when I'm a married grandma. I'm a red blooded str8 woman!

Do either of these two interactions with Jordan sound consensual? Imagine the uproar Dunham and her fellow white feminists would have engaged in had a man said he had tried to grind on an uninterested woman for 20 minutes and would do it again if given the opportunity.

Let me get this right: @lenadunham is upset because Odell Beckham didn't objectify her, but would have been upset if he did? 🤔🤔🤔

Second, she also said that she was sitting across from her bestie, Schumer. But it wasn’t Schumer’s attention she sought. Dunham needed validation to quiet her feelings of insecurity. But not just validation from anyone. She called out Beckham by name as the person who declined to acknowledge her mediocrity or to acknowledge her at all. She wanted Beckham’s attention, which is odd because Dunham is in a long-term relationship. Yet, she is fantasizing about another man fantasizing about her.

Based on nothing more than a single look, Dunham created in her mind an entire conversation that she assumed was occurring in Beckham’s head. According to her, Beckham took a look at her and saw her as a marshmallow, a child, a dog. Then, in Dunham’s head, Beckham still debated whether he wanted to have sex with her.

What sense of entitlement does Dunham have that she thinks not only that a black man should attempt to chat her up, but that he should be fantasizing about having sex with her? Remember, Beckham never said a word. Nor had she said one to him. Did she attempt to initiate a conversation? She clearly knew who he was. But projection of rejection is a far more soothing salve for her rampant insecurities.

..this whole situation feels too similar to how men try extra hard to get my attention for being an Asian. She's fetishizing.

Maybe Beckham doesn’t know who Dunham is. Maybe Beckham didn’t feel like speaking to anyone. Maybe Beckham knew who she was and intentionally chose not to interact with her. All of these things are possible. But the only likely scenario that made sense to Dunham is that he wasn’t attracted to her sexually. Because that is the only way that she saw him. As a black buck there for her choosing, who had somehow rejected her. In her head.

Slate got it horribly wrong by suggesting that perhaps Beckham is gay. First, Beckham’s sexuality isn’t an issue; Dunham’s projection is. Further, is the thought that any cis-heterosexual black man in Dunham’s presence would have been interested in her sexually, so perhaps Beckham is gay because he was not interested? She had just been grinding on Jordan, so that can’t be the correct conclusion. Second, again, this isn’t about black men. It’s about Dunham’s obsession with and fetishization of them, of which she is well aware:

I know I've been criticized for sexualizing our POTUS but you could bounce a quarter off that butt (image c/ http://t.co/stjZojr4

Third, Dunham writes, “It was like we were forced to be together.” This word choice is odd from someone who makes her living turning words into dialogue. Dunham and Beckham weren’t “together” by any means. But this is part of her fantasy. Not only, in Dunham’s head, was Beckham fantasizing about whether he wanted to have sex with her, they were already “together,” despite the fact that she is involved with someone else. Finally, Dunham decides Beckham is a misogynist because he wasn’t interacting with her to her liking based (again, in her head) on the fact that she was wearing a bow tie.

There is something about Dunham’s cries of harm at the hands of, or in this case, perceived thoughts of a black man that harkens back to the 1960 novel To Kill a Mockingbird and Emmett Till, who was tortured and murdered in 1955 at the age of 14 for allegedly whistling at a white woman. Perceived interest, or the lack thereof, is enough to make a white woman blame a black man. For all of her feminist bona fides, Dunham must have known this, but chose to ignore it.

Someone should tell @lenadunham and @amyschumer that Emmett Till was murdered because a white woman lied on him. For context or whatever.

Dunham has been ignoring black people for years, until it’s in her interest to no longer do so. She was criticized for the lack of black people in Girls. Not only were there no black characters, there were apparently no black people at all in the Brooklyn, New York, community where Girls took place. In responding to the gentrification of people of color when she had the significant platform to introduce nuanced and diverse characters, Dunham cast a black man, Donald Glover, as her love interest for a short story arc. There is a pattern here. What is her obsession with black bodies?

While she’s been called on her actions for years, especially by black women, it wasn’t until filmmaker Xavier Burgin took her to task on Twitter that she finally responded. One wonders if that was in keeping with her fetishizing of black males. Burgin was saying the same things that black women have said to her, but now that it was coming from a black male voice, it somehow held validity to her. She posted this apology:

The self-victimization here is apparent. This is not the first time that this has happened. When Dunham published her memoir that included several excerpts of what many said appeared to be child abuse of her sister, Dunham again feigned ignorance and centered on herself instead of the harm that she did to others. There is no indication that this time will be any different.

You can not both feign confidence and walk through life seeking pity everywhere you go.

Either be genuinely ugly and proud or don't be