‘It’s not an accident’: Suns general manager James Jones has made most of opportunity

The former player has helped build Phoenix into a championship contender

PHOENIX – James Jones made a rare public appearance on the Phoenix Suns Arena floor before Game 2 of the NBA Finals to present star guard Devin Booker with the NBA Cares Community Assist Award. Immediately afterward, the Suns general manager departed to his private suite in the arena to watch the game.

Jones has declined to be interviewed during the NBA playoffs because he prefers the focus be on his players. But based on how stellar the Suns have looked going up 2-0 in the NBA Finals with a 118-108 victory over the Milwaukee Bucks on Thursday night, his leadership is speaking volumes without him uttering a word.

The 49th overall pick in the 2003 NBA draft, Jones carved out a 14-year career in the league as a sharpshooter and became a three-time champion while playing for the Miami Heat and Cleveland Cavaliers.

“You always have respect for guys who come the hard way,” Williams said to The Undefeated about Jones in 2019. “You know what I mean? Not like the LeBrons and the ADs [Anthony Davis] and the Devins [Devin Booker] don’t deserve respect. I mean those guys, they’ve worked their talent. But you can relate to each other. We can tell stories and I can just listen to a story he’s telling and I’ll be like, ‘Yep, been there.’ ”

Jones’ presence in the Finals also puts a spotlight on Black executives in the NBA. Currently, there are 11 African American general managers in the league, as well as Toronto Raptors president Masai Ujiri, who is Nigerian.

At the start of the 2019-20 season, Jones and Williams were the only Black general manager-head coach duo in the league. Now there are five Black general manager-head coach duos in the NBA, including Cleveland’s Koby Altman and J.B. Bickerstaff, the Houston Rockets’ Rafael Stone and Stephen Silas, the Detroit Pistons’ Troy Weaver and Dwane Casey, and Dallas Mavericks newcomers Nico Harrison and Jason Kidd.

“I’m happy for those guys. They’ve earned it,” Stone told The Undefeated about Jones and Williams being in the Finals. “They put together a really interesting franchise. They did it their own way. … Our goal is to do the same thing. The goal is to get to the Finals and give yourself a shot.

“It’s not an accident. Opportunity is important. James should be really credited for the job he has done. He has done a great job.”

Jones understands the weight that comes with being a Black NBA general manager.

“My responsibility is always motivating me to be better,” Jones said in December 2019 to The Undefeated. “Knowing that I’m in a unique position, that I’m in a position that a lot of people aspire to, makes me honor that responsibility. And so I don’t see it as pressure. It’s actually a great challenge for me because I look back to every player, every executive that came before me and try to learn from what they did and I tried to build on that package that they present.” 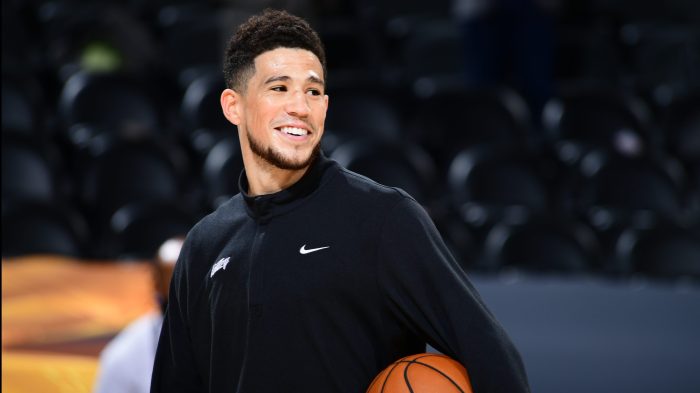 Jones retired as a player after the 2016-17 season and was named the Suns’ vice president of basketball operations that summer. In 2018, he was named the Suns’ co-interim general manager alongside Trevor Bukstein and, a year later, the team removed the interim tag from Jones’ title to make him general manager. Jones hired Williams, the former New Orleans Pelicans head coach, as the Suns’ new head coach on May 3, 2019.

Jones was scrutinized during the early part of his general manager stint. He dealt T.J. Warren and the 32nd overall pick to the Indiana Pacers in a three-team trade for cash. Warren went on to average 26.6 points and 6.3 rebounds per game for Indiana in the NBA bubble last season. Jones also was criticized for trading the draft rights to Jarrett Culver on July 6, 2019, to the Minnesota Timberwolves for the draft rights to Cameron Johnson and veteran forward Dario Saric.

But in November 2020, Jones acquired 10-time All-Star Chris Paul from the Oklahoma City Thunder. In exchange for Paul and forward Abdel Nader, the Suns sent Kelly Oubre Jr., Ricky Rubio, Ty Jerome, Jalen Lecque and a 2022 first-round pick to the Thunder. In Paul, Jones gave Williams a future Hall of Fame point guard who he had previously worked with in New Orleans. Twelve days later, the Suns signed gritty veteran forward Jae Crowder. Jones also added key contributors in veteran forward Torrey Craig (who left Game 2 with a knee injury) in a trade with the Milwaukee Bucks on March 18 and Cameron Payne as a free agent.

“When it started to get close, it was one of those deals where I was like, holy smokes, like, this could be really good,” Williams said of the Paul trade. “At the same time, I had feelings for Ricky, Kelly and Ty. They helped us get the program rolling. But I also knew that having Chris was going to change things in the way that could allow for us to be in this position, just because of who he is and my experience with him before.”

With Paul, the Suns earned the second-best regular-season record in the NBA (51-21) and the fifth-highest single-season winning percentage in franchise history (.708). Paul was an NBA MVP candidate this season. Booker became an NBA All-Star for the second time. And Deandre Ayton, with Paul’s leadership and push, began living up to his billing of a top pick. Johnson has also become a valuable scorer off the bench. Crowder is being Crowder. And Mikal Bridges, who scored 27 points in Game 2, has played well in his starting small forward role.

Paul is also close with Jones. Paul is the president of the National Basketball Players Association and Jones formerly held a role as secretary.

“JJ is our GM but he is like my counterpart, he’s like my brother,” Paul said. “We have been through so many different things with the CBA negotiations, so it was easy to talk to him about me wanting to be here. It’s nice when you have a relationship like that because you can be honest no matter what, good or bad, you know you’re going to shoot it to each other straight, and that’s how it’s always been.”

Jones has maintained he will be more than willing to talk if the Suns win their first championship. By not basking in the spotlight now, he is sticking to his humble approach with the hopes of letting a potential championship do the talking for him.

“Getting to see people achieve at the highest level,” Jones previously told The Undefeated. “That’s, for me, what this is all about. It really is about empowering people.”