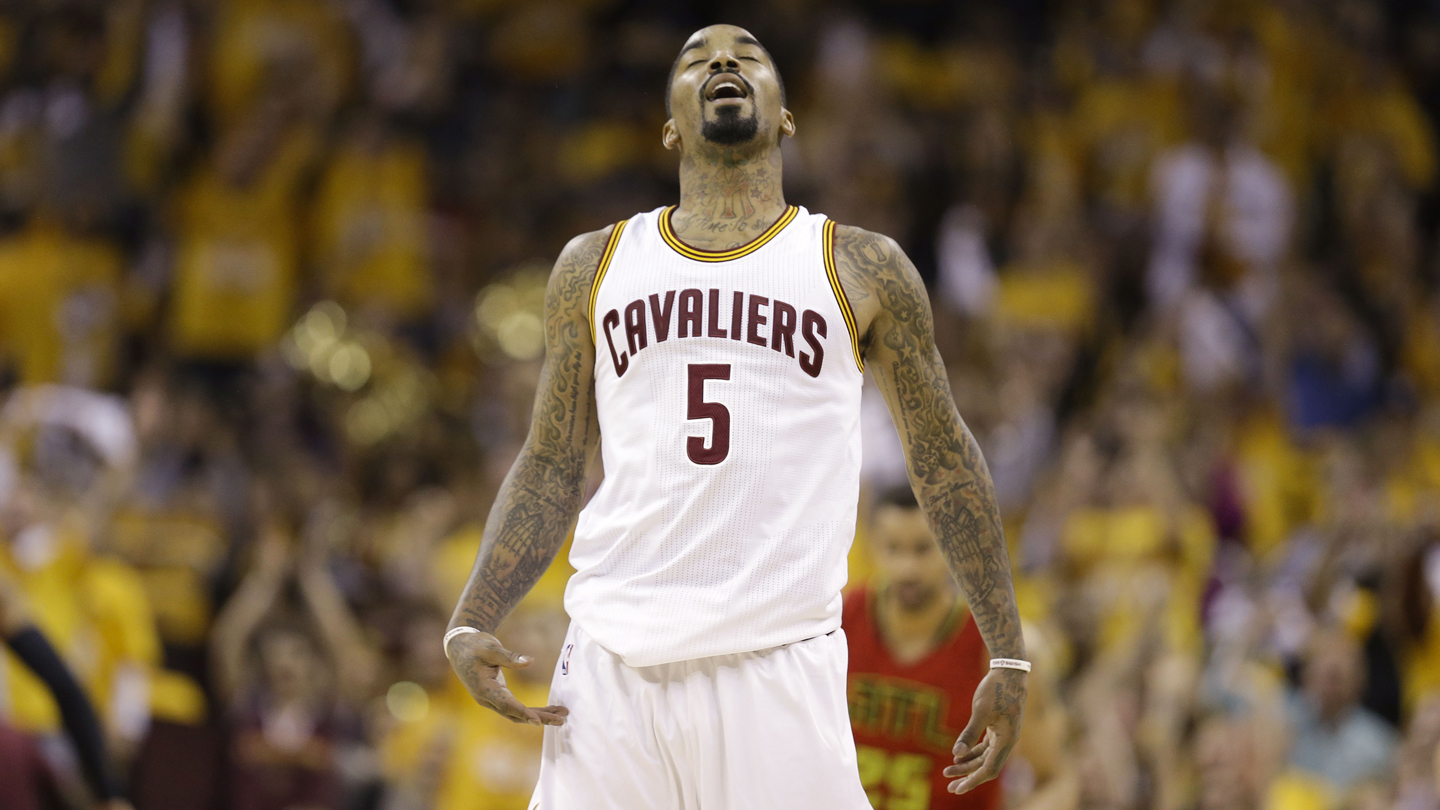 Cleveland Cavaliers guard J.R. Smith (5) reacts after hitting a 3-point shot against the Atlanta Hawks in the first half during Game 2 of a second-round NBA basketball playoff series, Wednesday, May 4, 2016, in Cleveland. AP Photo/Tony Dejak

LeBron James gets most of the credit for bringing a long-awaited championship to the city of Cleveland. But fellow Cavalier J.R. Smith, in his emergence as a tattoo-displaying, scene-stealing sidekick, might be a good reason to revive the once-popular television show the Best Week Ever.

No player on the Cleveland Cavaliers has traveled as long and rocky a journey as Smith.

For instance, after Smith took an ill-advised shot late in a 2007 playoff game while playing with the Denver Nuggets, coach George Karl said, “I just love the dignity of the game being insulted right in front of me.”

When the New York Knicks traded him to the Cavaliers in the middle of last season, many wondered whether the Cavs could endure his antics, and whether the city’s nightlife could survive full-on Smith. But since arriving in Ohio, his presence has been noneventful: no on-court issues such as untying the sneaker laces of opposing players that earned him fines in the past, and no reports of Smith disturbing the peace in Cleveland’s club scene.

Smith has been extra special since the Cavaliers beat the Golden State Warriors on Sunday, helping Cleveland become the first NBA team in history to come back from a 3-1 deficit to win an NBA title. As we anticipate what Smith might come up with for the parade honoring the Cleveland Cavaliers scheduled for Wednesday morning, let’s look at the top five J.R. Smith moments from the NBA Finals:

Just before Game 6, the ESPN cameras caught up a group of children. One of the kids was Smith’s daughter, Demi, who was asked what it was like to see her father play in the Finals.

Her answer: completely honest and priceless.

“I’m just proud of him because he made the championship without getting kicked off the team.”

Smith couldn’t help but laugh when he was shown the clip following Cleveland’s win:

One thing about Demi: She knows her dad.

Give James credit. When Game 7 was on the line, he trusted the guy once accused of “insulting the dignity of the game.”

James found Smith just beyond the arc two minutes into the third quarter with the Cavaliers down by eight. While some Cleveland fans were likely shouting, “No, no, no,” Smith confidently knocked it down, cutting the deficit to 54-49.

That second 3-pointer had the Cavaliers within 54-52 and helped Cleveland stay within a point of the Warriors going into the final quarter.

Be warned: If you haven’t seen this video, you might want to grab a box of Kleenex. You can make a lot of assumptions about Smith based on his history: He pleaded guilty to an accident that caused a friend’s death, and has been suspended for multiple infractions. He’s been fined by the NBA for tweeting an uncensored photo of a model in his hotel room, and had $1 million withheld from his contract while playing in China.

But what a lot of people learned about him on Sunday is that he comes from a loving family and has a strong bond with his father.

The moment wasn’t quite like Kevin Durant’s “Real MVP” speech that honored his mother, Wanda. But it was incredibly emotional and heartfelt, and showed a sign of Smith that few had ever seen.

4) High Praise from the King

As James sang the praises of everyone in the organization after Cleveland’s win on Sunday, he was asked about Smith. James recalled the day he was told the Cavaliers were going to acquire Iman Shumpert from the New York Knicks, and Smith was essentially being dumped by Knicks team president Phil Jackson in the process.

The King was elated:

Smith struggled in the early games of the Finals. But at crunch time during Game 7, he demonstrated his value was much more than being a throw-in.

You can probably launch a reality television show on Smith’s visits to Las Vegas if the story told by Lil Wayne on Highly Questionable last month is any indication. Thanks to ESPN senior writer Arash Markazi, who was at the Cavaliers’ victory party, we all got a chance to witness how Smith gets down in Sin City.

There’s Smith standing next to James in Las Vegas just as the party’s getting started — the last shot of the night where’s he’s wearing a shirt. Smith giving a champagne shower to a hostess wearing a James jersey, and finishing the moment off with a dab. And Smith getting completely turned up to the delight of the crowd.

When Smith left the club and arrived in Cleveland, he was still without a shirt. Who has the missing garment? At auction, it might be able to fetch a pretty high price.

Much maligned and often criticized, Smith will wake up every morning for the rest of his life as an NBA champion.

Wonder what Karl thinks about that?