Jacoby Brissett has been here before. Only now, he has a chance to become a star.

In the wake of Andrew Luck’s departure from the NFL, Colts backup QB Jacoby Brissett has his chance to shine

Here’s what one needs to know most about quarterback Jacoby Brissett: He has done this before.

To this point, the career understudy, who’s beginning his fourth season, has been defined by the solid performances he delivered when he replaced two of the game’s headliners. And now, if Brissett delivers a showstopper in his biggest role yet for the Indianapolis Colts, well, he could have a star-making turn.

The stage belongs to Brissett, who again takes the reins of the Colts after Pro Bowl signal-caller Andrew Luck retired suddenly on Aug. 24 at only 29, his body and mind battered after seven years in professional sports’ most violent workplace. Brissett is better equipped than many former second-stringers for this daunting task, replacing a superstar at the game’s most important position on the eve of the regular season. 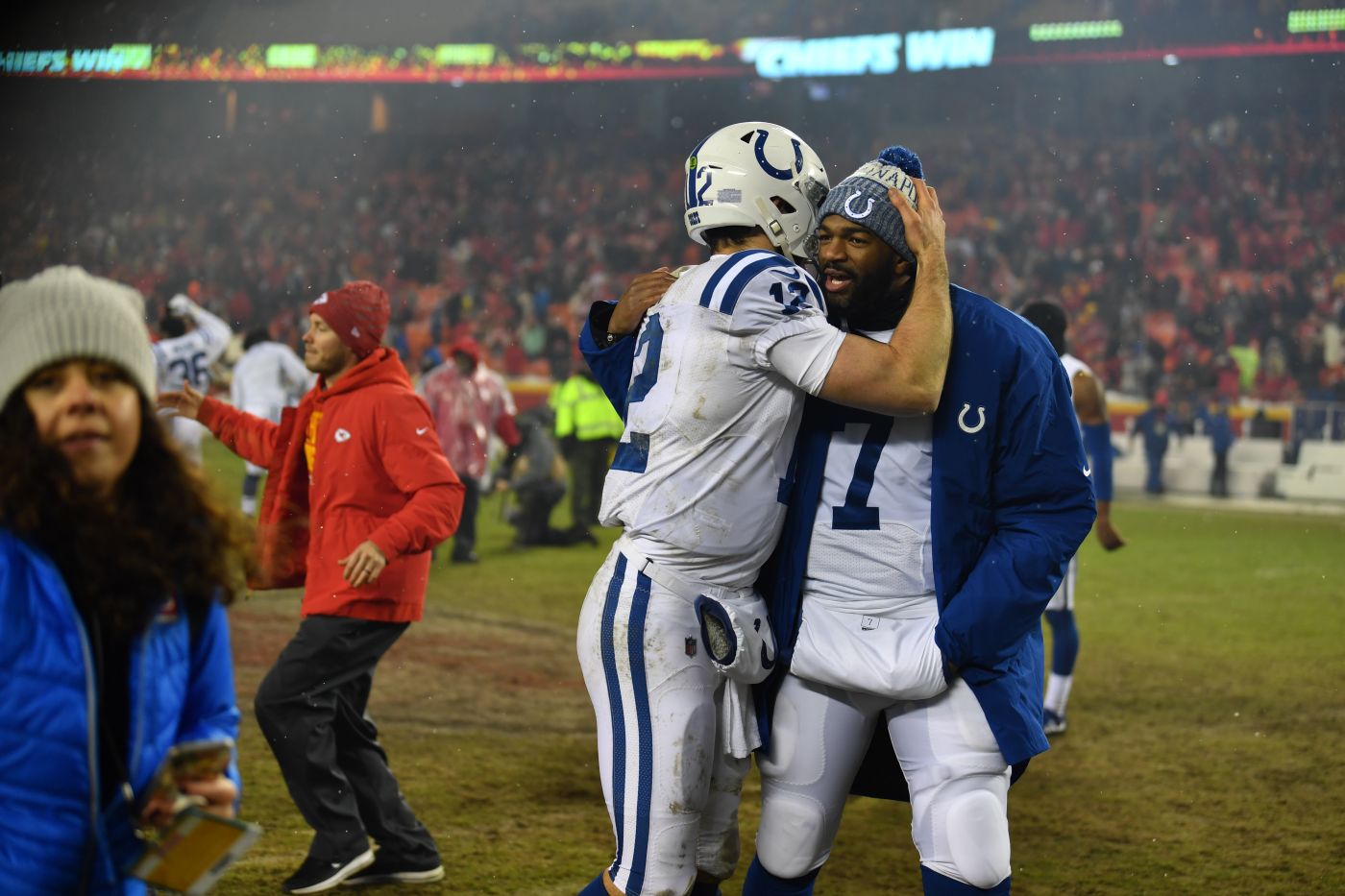 With Luck, the Colts were roundly viewed by league observers as a playoff-caliber team.

Brissett will have to prove he’s capable of quarterbacking Indianapolis to its full potential. There’s evidence, however, to suggest he may just be the right guy to replace Luck for the long haul.

To hear the Colts tell it, despite Luck’s departure, they’re still quite capable at quarterback.

“This is a good football team,” general manager Chris Ballard told reporters the night of Aug. 24 at Lucas Oil Stadium. “We’re young, good on both fronts, [with] some good young skill players and a good young quarterback in Jacoby Brissett.”

At only 26, Brissett has more NFL game experience than most young backup signal-callers. This will be Brissett’s second stint stepping in for Luck when the wins and losses actually matter.

Luck was battling a major shoulder problem in 2017, so the Colts traded for Brissett, who was a backup with the New England Patriots, on Sept. 2, 2017. Brissett crammed for two weeks to learn the Colts’ playbook.

Although the Colts went just 4-11 in Brissett’s 15 starts that season, he played remarkably well under the circumstances, passing for nearly 3,100 yards with 13 touchdown passes and seven interceptions. What he did was tantamount to a trial attorney stepping into a major class-action lawsuit and taking the lead chair right before closing arguments.
What’s different about this season as opposed to 2017 is that this iteration of the Colts’ roster is just better. If the quarterback, one of eight starting black passers in the league this season, is up to the challenge, the Colts should be able to do big things in the AFC South.

Talk to people around the league about Brissett and they’ll tell you he’s razor-sharp in the film room, has a good passing arm and is a big-time athlete. As important, though, they say he’s a selfless teammate who is well-respected in the locker room. While officially announcing his retirement Saturday night, Luck touched on who Brissett is as both a football player and a man.

“Diligent, sharp, loves football,” Luck told reporters. “I hope I can continue to support him in different ways, so thankful for our friendship. On a personal note … coming back into the building [after being sidelined because of his shoulder problems] early last year, I was very jealous and resentful of this fun, happy dude that was in my spot as [the] quarterback on this team.

“I obviously did not have any confidence in myself either. I obviously could not have been more wrong in so many ways. A lifelong friend, he means so, so much to me. He’s a big part of me, and a big part of me having one of the most rewarding years of my life last year. Cannot wait to support him and see him lead this team. Excited for the future of the Colts, in large part because of Jacoby.”

Besides Brissett focusing on his work ahead, his thoughts are also with his friend. “It’s been a roller coaster of emotions,” Brissett told reporters. “The main thing is not being able to see Andrew every other day.”

That’s part of the business of the NFL, which Brissett learned quickly.

He had hoped to put down roots with the Patriots, who used a third-round pick (91st overall) in the 2016 NFL draft to select the West Palm Beach, Florida, native. Brissett was impressive as a two-year starter at North Carolina State after spending his first two years in college as a backup at the University of Florida.

And because of a confluence of events during his rookie season, Brissett even had to step in at quarterback for the greatest of all time: Tom Brady. In the process, he became the first African American to hold that distinction in franchise history. Considering the racial discord in Boston’s past, Brissett’s accomplishment was noteworthy.

He went 1-1 for the Patriots, completing almost 62% of his passes for 400 yards with no touchdowns and — here’s the key — no interceptions. In a spotlight moment, Brissett avoided the types of major missteps that many rookies would make in such a situation.

Granted, Brissett only shot up the depth chart because Brady was serving a four-game suspension for his role in the Deflategate saga, and then-No. 2 quarterback Jimmy Garoppolo was sidelined because of an injured passing shoulder. The Colts, however, saw a lot they liked in Brissett’s brief audition. And every day since he arrived at their headquarters, Brissett has only further validated their belief in him, Colts officials say.

“Jacoby Brissett is a rare, rare leader. He is. He’s a rare human being, man. That locker room loves Jacoby Brissett. They love him.”

For Brissett and the Colts, the curtain is about to be raised on a production that received an unexpected jolt shortly before opening night. But the show must go on, and Brissett now has top billing.