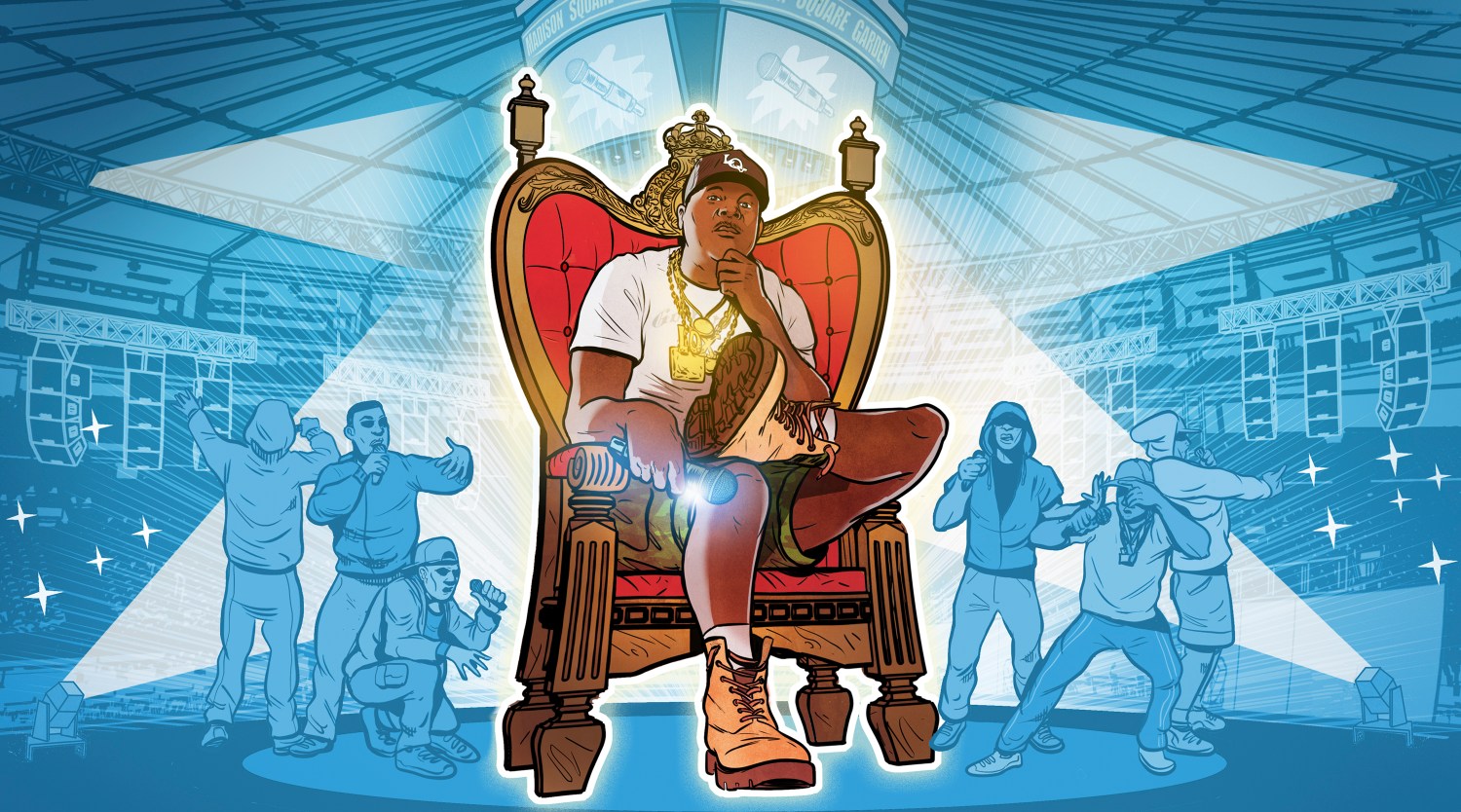 The Yonkers OG and Lox veteran and his year to remember

It’s difficult to think of a more deserving rapper to have a victory lap in 2021 than Jadakiss. What The Lox, composed of Jadakiss, Styles P and Sheek Louch, managed to do against Dipset in the August Verzuz watermarked the finest moment in the platform’s brief history. Jadakiss’ masterful display of showmanship, lyrical ferocity and charisma that night — on top of an already prolific calendar year — earned him hip-hop MVP honors.

By the time Jadakiss erupted into his “Who Shot Ya” freestyle, the Madison Square Garden crowd was already eating out of his hand. Half of the time the mood felt more like explicit choir practice. The freestyle itself wasn’t directed at his opponents, but Jadakiss was making a point.

Jadakiss, 46, is an eclectic soul. Over the last quarter century, he’s taken up several lifestyle changes. He’s become an avid hiker. He went viral over the summer with a workout that featured Jadakiss pulling off his best Simone Biles impression on a pull-up bar. And he’s infused entrepreneurship and wellness advocacy with his and Styles P’s Juices For Life shop. He’s acting now, too.

Emceeing, though, is where the Yonkers, New York, goliath cut his teeth. He didn’t take home MVP honors this year because of an album, mixtape or EP. Jadakiss’ last full-length project was March 2020’s Ignatius, which unfortunately coincided with the onset of the coronavirus pandemic. So, in a lot of ways, 2021 was a delayed coronation for a career that’s been deserving of such. All he did this year is what he’s made his trademark dating to the early 1990s.

“Styles, Sheek, Jada, they’re all very blue-collar guys,” Jeff Rosenthal told me. He and his brother, Eric, host the 2 Jews & 2 Black Dudes Review The Movies podcast with The Lox. “There’s the money and the accomplishments, yeah. But there’s still the mindset of, ‘I’m just a regular dude from the block.’ ”

This year, Jadakiss was everywhere but never the loudest in the room because the music, the energy and the respect for his craft spoke volumes. When Jadakiss spoke, an entire genre listened.

While bloated projects and juking streaming numbers are par for the course these days, Jadakiss was the leader in making moments feel like moments, with a shelf life longer than an Instagram story. Even when not every moment involved rhyming.

Take a second to put Jadakiss’ career in context. Mary J. Blige’s cousin introduced The Lox’s music to her — and she got it in front of Puffy. He came into the game co-signed by luminaries such as The Notorious B.I.G. and later DMX. He dropped multiple classics with Mariah Carey. Went to lyrical war with a peak Beanie Sigel and the always-beef-ready 50 Cent in the early-to-mid-2000s. Starred with basketball great Allen Iverson in a Reebok commercial that has yet to be replicated. And put together a sonically diverse catalog that’s almost second to none.

Jadakiss’ calendar year was defined by a string of guest appearances. There was his scene-stealing performance on Snoop Dogg’s “Murder Music” with Benny the Butcher and Busta Rhymes. Jay-Z, via “King Kong Riddim” from The Harder They Fall soundtrack, and Kanye West both came calling for his services. Meanwhile, “Black Illuminati” with Freddie Gibbs is a virtuoso flex and one of the year’s best songs with Jadakiss acknowledging his own stature, saying, “I’ve been reppin’ the Apple since it was rotten/When you a golden, then you can never be forgotten.”

“[Nowadays] we’re able to accept people being funny or people not always having their guards up. Jada, Styles and Sheek, they’re authentic, organic guys who, I think in this world we live in, people want to be like them,” Eric Rosenthal said. “Everyone wants to have longevity. Everyone wants to work hard and see it pay off. And what a wonderful thing it is for Jadakiss himself to see.”

Reconciliation is the gift only survivors can cherish. That’s why Freeway posting video clips of himself, Beanie Sigel and Jadakiss this fall together mattered so much. And why Jadakiss saying, “These my real brothers [and] Philly my second home,” carried the emotional weight it did even if the beef was squashed years ago. In a genre that says “R.I.P.” at an exhausting rate, to be able to celebrate that sliver of time was paramount.

Nonetheless, Jadakiss’ MVP run this year wasn’t totally rooted in sentiment. What solidified it were the bodies he caught on two separate Verzuz stages within two months of each other. Though Jadakiss and Fabolous collaborated on the joint 2017 album Friday on Elm Street, it was clear that Jadakiss went into the evening in June with one intention: walking away victorious. Fabolous ran through his hits, but Jadakiss added an element of showmanship previously unseen in the pandemic-inspired medium.

With Fabolous and Jadakiss facing off in the first Verzuz in which artists could actually feed off each other and not be separated, putting on a show was important. Unable to smoke, Jadakiss decided to enjoy himself and pour up. And 200,000 people from around the world were punch-drunk off Jadakiss’ performance. He proved to be the perfect person, on the perfect platform with the perfect mixture of bravado and infectious personality.

“This needs to be doubled down on,” Jeff Rosenthal said. “Nobody would’ve been as excited for the second [Verzuz] if it wasn’t for the first one.”

The vibe outside of Madison Square Garden in August had all the energy of New York City in the early 2000s. Dipset and The Lox were blasting out of Ducatis. People came dressed for the event in style, some, inspired by Jadakiss, with paper towel headbands. This was the first Verzuz where tickets were sold.

Dipset, like Fabolous before them, came into the night as the favorites. But it was again The Lox who had a counter for every scenario. What was one of the more anticipated Verzuz soon turned lopsided. Like a pugilist letting the fight come to him — a la Juelz Santana’s woeful tactic of saying The Lox didn’t have songs that catered to women — Jadakiss & Co. launched into a medley that immediately debunked said theory. Or watching a fighter go directly for the kill shot — like Jadakiss’ dominating freestyle over Notorious B.I.G.’s “Who Shot Ya.”

More than a half-million people tuned in to witness Jadakiss piece together the rap moment of the year. Everyone in the building was in awe, including the likes of Fat Joe, Carmelo Anthony and more. Watching Jadakiss challenge the entire genre to step its game up was nothing short of captivating. Muhammad Ali terrorized Ernie Terrell in their 1967 fight, constantly asking his opponent, “What’s my name?” after the former referred to him by his birth name Cassius Clay before the bout. Jadakiss applied that same pressure, to the point that not even Cam’ron’s greatest hits or legendary swagger were enough to sway a lopsided fight.

Everyone left or logged off that night understanding that Jadakiss had put on one of the best Madison Square Garden performances of at least the last 20 years. No one has used the Verzuz platform better than he did. Fat Joe’s “Yesterday’s price is not today’s price” — arguably the most-used phrase of 2021 — was directly inspired by Jadakiss’ unanimous TKO.

Jadakiss is rap’s 2021 MVP because he took advantage of an opportunity to showcase just how vicious, engaging and intoxicating he always has been. Maybe a new generation of rap fans came to understand that this year. Maybe an older generation was reminded. During the Verzuz with Dipset, Jadakiss once again serenaded the crowd with his verse from Ja Rule’s 2004 hit “New York.”

“So when you tell me I’m the best,” the crowd, in choir rehearsal by then, followed up, “it’s a compliment.”

The line had always felt accurate. In that moment, the sentiment was never more fitting.