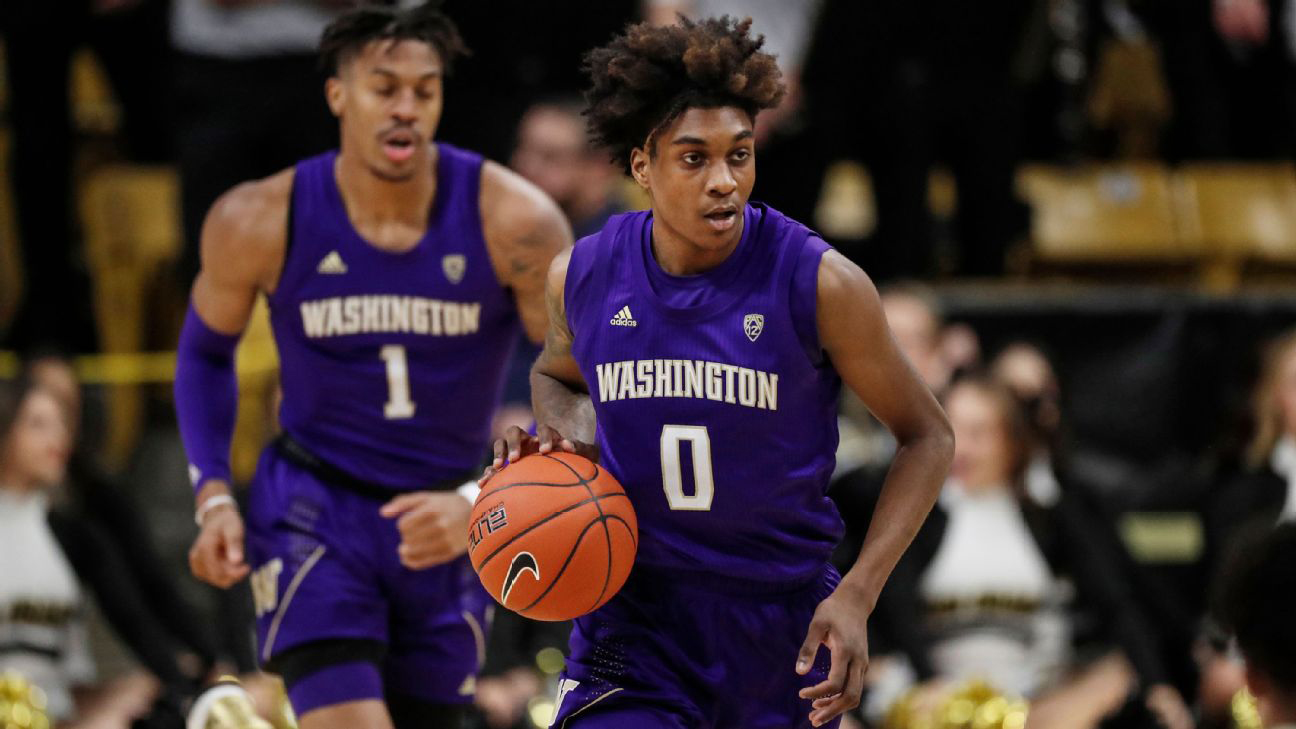 Jaden McDaniels is a product of the Seattle basketball fraternity

Jaden McDaniels picked up his phone to answer an incoming call. On the other end was the godfather of Seattle basketball himself, Jamal Crawford, ready to impart words of wisdom to the player who will soon continue the tradition of Seattle ballers making it to the NBA.

McDaniels, a projected first-round pick in Wednesday’s NBA draft (ESPN, 7:30 p.m. ET), has greatly benefited from the unique support system he has had growing up in Seattle among the many NBA players from the area.

“I would say the Seattle fraternity and the impact it had on me, just them being around all the time, and showing their encouragement and support, it inspires us,” McDaniels said. “It inspired me in high school when I would see Jamal in the stands at my games. Or even him helping me in the gym inspired me to try to be like him or even better. Just having that support system around makes you feel like you’re in a family with them.”

Considering the NBA’s long list of players from the Seattle metropolitan area, which ranks 15th-largest in the United States with 4 million people, an argument could be made that this Northwest region produces the most basketball players pound for pound in the country.

“There’s a lot of hidden talent in Seattle,” said Charlotte Hornets forward Jaden McDaniels, who is Jaden’s older brother. “Geographically, we’re out of the way. Some people don’t even know where Washington is. But there is actually a lot of good competition there.”

Or as Murray, the San Antonio Spurs starting point guard, puts it: “We just hoop. We ball. We love it.”

‘The difference with us is guys always help the next one’

Some players credit Crawford for the strong hoops lineage in Seattle, where the population is only 7% Black. But Crawford credits Christie for building the foundation.

Christie led a now-storied Rainier Beach High basketball program to its first state championship in 1988. The former Pepperdine University star was drafted by the Seattle SuperSonics in 1992. He never suited up for the franchise, but went on to play 15 seasons in the NBA as a defensive specialist.

During his NBA career, Christie also started a Seattle pro-am basketball league in 1993, with help from his agent J.R. Harris, in hopes of bringing a stronger spotlight to basketball in Seattle. It was called All Hoop, No Hype.

Christie paid for the jerseys and gym time, creating a family-friendly environment for the community to play and watch hoops. It was an instant success.

“They were superexcited to come and play,” Christie said. “Before you know it, it’s folks up in here and the basketball is getting hot and heavy. And that’s really, for me, what was the biggest thing that I remember is how proud I was of our city to watch us come together like that.”

In 1994, Christie was introduced to Crawford, a promising freshman guard at Rainier Beach, and was convinced to give the teenager a roster spot in the pro-am league.

“He was skinny and all that, but the ball looked right on him,” Christie said. “Immediately, I was like, ‘Oh, yeah, he’s going to be all right. Let him on the court.’ ”

The youngster didn’t disappoint, delighting fans with his dazzling dribbling skills and 30-point scoring games. His performances earned him a spot on the all-league team.

Christie took Crawford under his wing, mentoring him at games and inviting him to workouts on off days. It made an impact.

“I looked up to him so much because he was where we all aspire to be,” said Crawford, who has averaged 14.6 points during his 20-year career. “He would ask me, ‘You want to work out?’ We’re supposed to be there at 6:30. I’d be there at 6 outside waiting for him.”

Former Seattle AAU and high school basketball coach Francis Williams said African American players went unnoticed nationally until they finally received the opportunity to play in AAU circuits in the early 1990s. Williams tells the story of then-Drake University coach Rudy Washington looking at his predominantly Black AAU team in 1997 and saying, “I didn’t know there was that many Black people in Seattle.”

“That was a turning point for me,” Williams said. “That’s when I knew our kids would be seen. … Since then, it has been almost nonstop in producing players.”

What Christie did for Crawford as a mentor, Crawford has passed on. Thomas, for example, cites Crawford and Terry as two Seattle players who helped him in his quest to make the Sacramento Kings roster after he was selected 60th overall in 2011.

“The difference with us is guys always help the next one,” Thomas said. “The guys who’ve made it, whether it be Jamal Crawford, Jason Terry, those type of guys, I remember when I was building great relationships and friendships with those guys, they were like, ‘Things that we do for you, we want you to do for the next guy coming up.’ ”

“It’s like an unwritten rule,” Crawford added. “We all know that.”

In 2005, Christie also passed the torch to Crawford to run the pro-am league.

“It had a special meaning because not only did I know the history of the pro-am, but I was actually a participant,” Crawford said. “So, when he passed the torch to me, I was honored.”

Now called “The Crawsover,” the league is considered one of the best in the country. It’s common to see NBA players from Seattle and other local talent suit up. Through the years, Crawford has also convinced the likes of Kobe Bryant, Kevin Durant, John Wall, Klay Thompson, Chris Paul and Blake Griffin to play.

“I’m proud of him as a father, as a human,” Christie said of Crawford. “You walk into the gym and see all those people, the jerseys and the sponsorships that he’s been able to get. Kobe came through and KD came back and played. I hadn’t gotten to that point where I was able to leverage relationships and stuff, but that’s what he’s been able to do. …

“But that’s what you’re supposed to do. You pay it forward.”

“There was an All-Star game and the mayor was playing. I.T. [Thomas] was playing, Tyreke Evans, KD [Durant], Blake Griffin,” Jaden McDaniels recalled. “Then it’s, like, free to get in. So, everybody’s there. … And it’s just like, what more could you ask for? To see a bunch of superstars playing, hooping, it’s the best environment. …

“Just seeing the Seattle guys, especially Jamal, I.T., and then knowing they are from around my city and different areas, it’s just like everyone can make it out. You just have to put the hard work into it.”

The pro-am league has helped fill the void for a city without an NBA team.

“Jamal is the heart and soul,” Murray said. “He is just carrying it on from the older dudes who helped him. He has passed the game down to us and has given us good runs from dudes in high school all the way to the pros. It’s going to continue to grow.”

‘The generations all connect’

For decades, there was not a bigger basketball influence in Seattle than the SuperSonics. The Sonics won an NBA championship in 1979 and have featured a number of Hall of Famers.

Christie and Crawford both grew up big Sonics fans. Christie, 50, recalls winning a church contest at 11 years old that afforded him and a friend a ride to a Sonics game with an actual player. In this instance, Christie got a ride to a Sonics game from star forward Xavier “X-Man” McDaniel in a Range Rover. (“I was like, ‘I’m trying to live like this, bro,’ ” Christie said.) Crawford, 40, once worked in the Sonics’ former home, Key Arena, where he carried food from the basement to the concession stands. Once the delivery was made, he sneaked long peeks at the Sonics games in progress.

But in 2008, a new ownership group relocated the Sonics to Oklahoma City and changed the team name to the Thunder. The city has been without an NBA team ever since.

Twelve years later, Christie and Crawford are still disappointed the Sonics are gone, but are proud that the pro-am league is able to connect Seattle to the NBA.

“I know what it meant to me to have that,” Crawford said about growing up watching an NBA team. “And the kids today in Seattle didn’t have that. And that’s exactly why the program is so important now, because there’s no NBA players for them to see.”

“We don’t have a pro team,” LaVine added, “so this allows kids, fans and the community to see the game.”

ESPN.com currently projects McDaniels, who played at Washington, to be a late first-round pick. But Crawford and Thomas both expect the 6-foot-9 forward to outperform his draft projection.

“His skill set is amazing,” Thomas said. “He has a pro game. He’s a great kid. And I think that’s half the battle right there, being a good person and being more than just a basketball player. And I think he has all the tools to be something special when he makes it to the NBA.”

Crawford added: “The way he shoots, his demeanor, the way he understands the game, he can affect the game in so many different ways on the court. He plays the right way, too, for somebody so talented.”

With a bright future ahead, McDaniels also understands his responsibility to his hometown.

“I for sure will be popping in to watch high school games, even college, just to show my support,” McDaniels said. “I like the things that Jamal, I.T. and all of them did for me. So, I like to do the same for the youth.”

Next up for Seattle is Paolo Banchero, a high school star ranked third overall in the Class of 2021 by ESPN.com, as well as high school prospects Jackson Grant, Nolan Hickman, Shane Nowell, Kaden Perry and MarJon Beauchamp.

“It’s a fraternity,” Crawford said. “The generations all connect.”