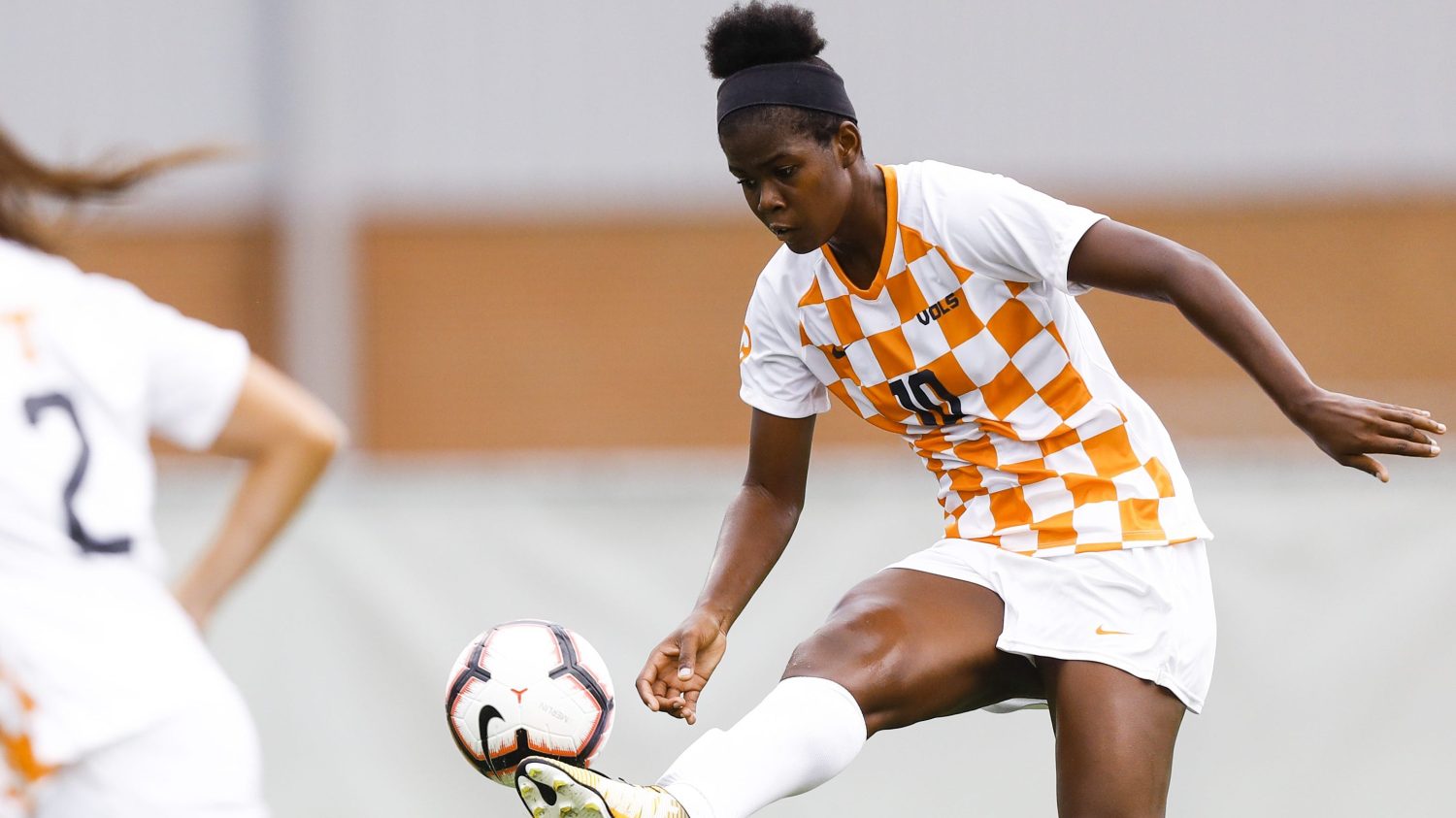 Forward/midfielder Khadija Shaw of the Tennessee Volunteers with the ball during a match between the Volunteers and the Mississippi State Bulldogs at Regal Soccer Stadium in Knoxville, Tennessee, on Sept. 23. John Golliher/Tennessee Athletics

Khadija “Bunny” Shaw knows kids from her neighborhood typically don’t end up celebrated on TV. They rarely get offers from colleges to play sports or visas to travel abroad. And most certainly don’t rise to stardom and represent their country in a World Cup.

“I had a tough life growing up,” Shaw told The Undefeated. “I was in an environment that was very violent. It was hard for me knowing that I’m witnessing what’s happening. There’d be days when I’d tell my mom, ‘There’s violence everywhere.’ I understand that everybody’s trying to make a living and all of that, but I’d tell my mom, ‘Mom, I don’t know if I can still do it.’ And she’s like, ‘Don’t worry about it, you’ve got to block things like these out.’ ”

Violence ravaged the Shaw family in unspeakable ways, claiming the lives of four of Shaw’s older brothers — three to gunshots and one to a car accident.

“It’s been hard, it’s been a rough one, last year, the year before,” she said. “I lost nephews, I’ve lost brothers, and all of that, you know, it’s tough, but at the end of the day, I am pretty sure they would want to see me be great.

She wasn’t fond of the nickname “Bunny” at first, but it grew on her. She can thank her big brother Kentardo for that. He planted the name on her because of her love of carrots. It also happens to suit her game. Rarely does a player standing 5 feet, 11 inches tall have her combination of speed, touch, creativity, vision and finishing ability.

“One of my brothers that died was the one who taught me to play soccer,” she said. “In my community, soccer was that thing where, you know, you just play. I would always have to sit down and watch my brother play. I was really desperate to know what was so unique about this sport. So I started playing on the street, right in front of my house. I heard about David Beckham and Ronaldinho, and I was like, ‘OK, I can be the next Ronaldinho and David Beckham.’ You know?”

Shaw’s play at St. Jago High School in Spanish Town caught the attention of Vin Blaine, then head coach of Jamaica’s Reggae Girlz. She was offered an opportunity to train with the country’s elite pool of players who had aspirations to represent their homeland. Shaw’s rise would be fast and furious, much like her style of play. She would end up representing Jamaica at every age group — U15, U17 and U20 — as a 14-year-old.

“The first time I saw Bunny play was when she was with the U17s when Jamaica hosted the CONCACAF playoffs in Montego Bay [in 2015],” said Hue Menzies, the current coach for the Reggae Girlz senior team. “I was a scout for the U.S. national team at the time, and ‘special’ is the only word I could find to describe what I saw. You can’t teach what Bunny knows. I was sitting there with Chris Ducar, who was the assistant coach with the UNC [University of North Carolina] women’s program, and he says to me, ‘Hue, we haven’t seen this in a long time. We need to really keep tabs on this kid.’ ”

Even though Shaw turned heads with her play at St. Jago, she wasn’t flooded with college offers after graduating in 2014, save for one offer from Florida.

“Her grades weren’t where they needed to be — because they just don’t have the resources, you know,” Menzies said. “You go to where she lives, in Spanish Town, and sometimes they don’t even have [electricity] to study. So she went to a little junior college in Texas, Navarro, and she didn’t really like it. Soon after that she packed her bags and came down here to Eastern Florida State College [in Cocoa, Florida], and she was there for two seasons. She got her grades up, graduated and earned her associate’s degree.”

She was also named to the National Junior College Athletic Association’s All-America first team after scoring 15 goals and adding five assists in 11 games. Word quickly got to Brian Pensky, the head coach at Tennessee.

“I saw her at one of her junior college games at Eastern Florida, and she was just a woman amongst little girls,” said Pensky, the Lady Vols’ head coach since 2012. “You look at her 5-11 frame and then all of a sudden you see her soft feet with that frame and you see her passing ability, her ball-striking ability, and then her ability to play with her brain. It’s very rare to see kids with such a high level of collection of assets.

Once at Tennessee in 2017, Shaw wasted no time making a name for herself, earning Offensive Player of the Week honors in the Southeastern Conference (SEC) three times while leading the team in goals with 14, second most in school history.

By her senior year, the communications major (with a 3.2 GPA) took her game to new heights, playing in just 11 of the team’s 18 games but bagging 11 goals, including six game-winners, while leading the conference in all attacking categories.

When she wasn’t tearing up the SEC — she earned SEC Offensive Player of the Year honors — Shaw was the Reggae Girlz’ No. 1 target, scoring 13 goals in 12 matches while helping the team earn acclaim as the first Caribbean nation to qualify for the Women’s World Cup after defeating Panama on penalties in the CONCACAF third-place game on Oct. 17.

“This group [of girls] didn’t care about the adversity,” Menzies said of the No. 64-ranked team, which restarted its women’s national team program in 2014 after a six-year hiatus, led by support from Bob Marley’s oldest daughter, Cedella Marley. “Not having our uniforms on time, or not having jackets when it was cold, they just made a full commitment that they were going to try to qualify for the World Cup. We had all our obstacles and we just dealt with them. They want to create history but also sustain it. We have a saying: ‘We’re not there to look at anybody, we’re there for people to look at us.’ ”

Even after two-plus years of coaching Shaw, Pensky still finds himself enamored by her smile — a smile that never leaves her face, despite everything she’s been through.

“Bunny has the smile of a little 3-year-old girl,” the coach said. “I mean, just the sweetest smile in the world inside an absolute woman’s body. I think she wants to be treated like everybody else, like a kid who needs a hug and love just as much as the least talented kid in our group.

“She obviously has had some hardship. Her dad makes shoes and mom raises chickens. Dad used to make her cleats, and then when she would get a little bigger he would just change the stitching on them to make them a little bigger until she got new cleats. He just adjusted them, you know? So you’re certainly talking about humble beginnings.”

Shaw lives for all of those memories and is determined to make new ones. Her family has seen her play in person only once, something that is not lost on her when she sees teammates’ families in the stands. Her college career is almost over. The Lady Vols were ousted in a nine-round penalty kick shootout in the SEC tournament by eventual champions LSU. The team got a No. 2 seed in the NCAA tournament and will play Louisville on Friday.

And there’s unfinished business with the Reggae Girlz at the 2019 FIFA Women’s World Cup (June 7 to July 7) in France — two decades after the original Reggae Boyz made headlines by qualifying for the 1998 FIFA World Cup, also held in France.

But Shaw has bigger plans too. A professional career is all but a certainty. Whether she takes her talents to the National Women’s Soccer League or to Europe, she’ll set up shop wherever it’s most feasible for her family to see her play. She also wishes to be a beacon for other girls in Spanish Town and all of Jamaica who might be reading her story.

“The reason I talk about losing my relatives is because [my story] can offer help to somebody else who’s going through the same thing,” she said. “I mean, it’s sad to say, but you never know who can benefit from it. I mean, it’s still hard, it still knocks me when I talk about it, but at the end of the day, they’re not here with me, and even though I wish they were, I know that they’re in a better place looking down at me and hoping for the best. I’ve gotten letters from little kids, saying how my story inspired them, so I think talking and expressing myself helps others.”