‘They’re playing hard for J.B. … If a team plays hard, generally it means a coach is making an impact and making a connection with that group.’

The five characteristics — Details. Toughness. Together. Compete. 1 More — plastered across the weight room wall at the Cleveland Cavaliers practice facility are more than affirmations or mere slogans for head coach J.B. Bickerstaff, his players and his staff.

“It’s what we live by every day,” Bickerstaff said. “They’re a combination of things that I thought were important to building a team. It’s also characteristic of our city, and about living it, so we’ll earn the respect of our fan base.”

Those statements helped mold and rally the Cavaliers (18-12) into not only one of the NBA’s surprise teams, but one of the best in the Eastern Conference — built on an elite defense and an entertaining brand of basketball of fast breaks, alley-oops and unselfish ball movement.

This season’s start — they’ve won five straight games by an average of 16.8 points — is maybe even more shocking because the Cavs had only won 60 total games in the last three seasons since LeBron James departed for the Los Angeles Lakers. Entering this season, there were questions about how the Cavaliers’ rookies and other new additions would mesh.

There were also questions about Bickerstaff, an NBA coach’s son, who was continually bypassed for head-coaching jobs and often found himself filling in as an interim, holding the clipboard until a permanent head coach was hired.

Bickerstaff, 42, is making his presence known.

“They’re playing hard for J.B.,” Golden State Warriors coach Steve Kerr told The Undefeated. “A true measure of how well a coach is doing is how well his team is playing. If a team plays hard, generally it means a coach is making an impact and making a connection with that group.”

“They’re a good team,” said Budenholzer after a recent victory over the Cavs. “J.B. Bickerstaff’s doing a good job of coaching them.” 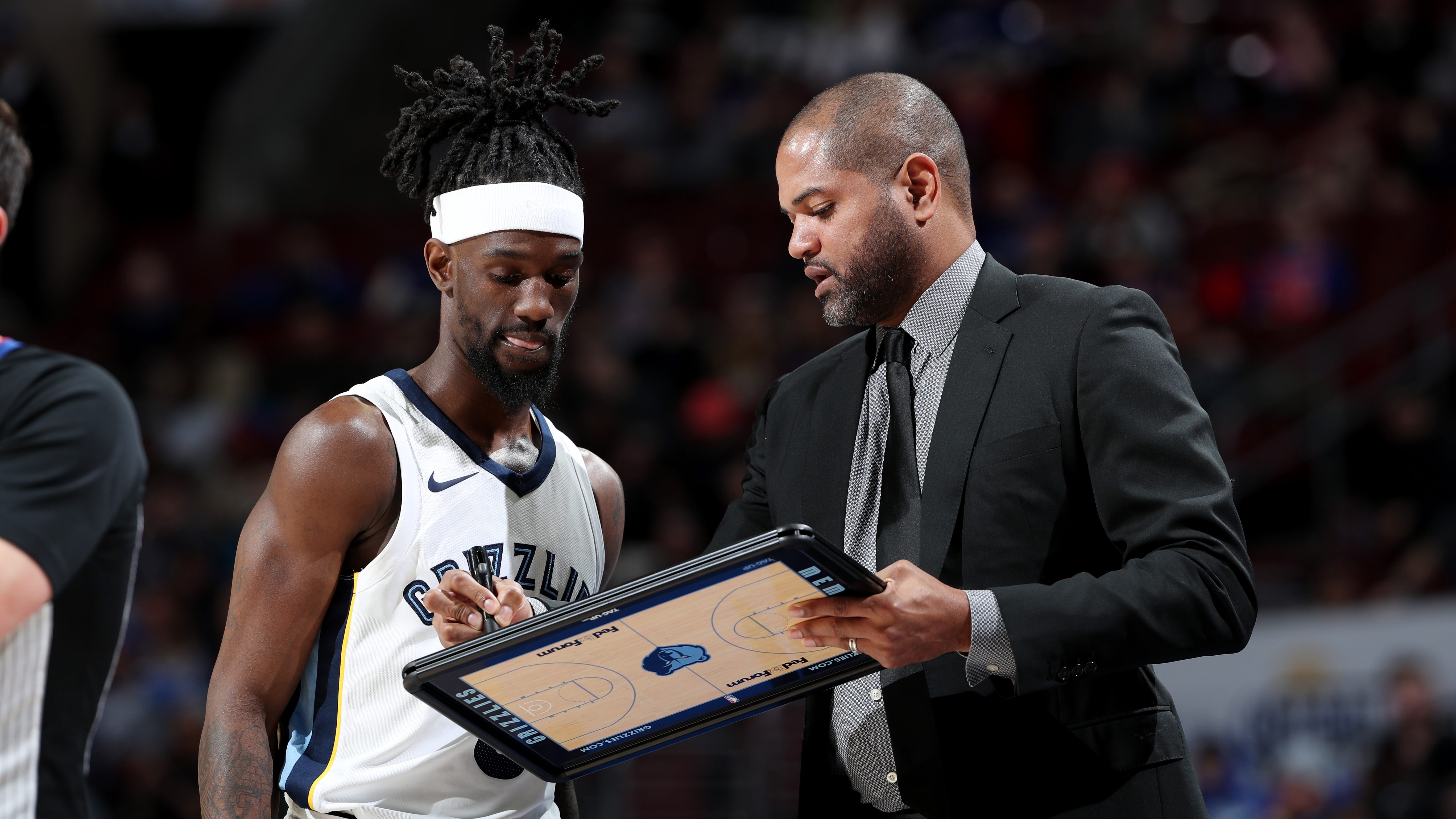 “I always make the joke about when kids grow up and go to day care or after-school programs, we instead went to basketball practice,” Bickerstaff said of himself and his brother. “It’s like those Baker Mayfield [Progressive] commercials where the arena is his house. That’s what it was like for me and my brother.”

Bickerstaff has vivid memories of running around the arena with his brother, running errands for NBA players, watching NBA legends during games and dreaming about possibilities.

“I was fortunate because I never had to look outside of my house for role models,” he said. “My mom was a schoolteacher and my dad a coach. Those are the two people I admired growing up. So my thoughts were to play in the NBA and then become a coach.”

Perhaps an early sign of Bickerstaff’s passion was on display following the 1987 Western Conference finals between his dad’s SuperSonics and the Lakers, with legends Magic Johnson, James Worthy and Kareem Abdul-Jabbar. The Lakers led the series 3-0 and held a huge lead in Game 4 before finishing the sweep. An 8-year-old J.B., while sitting on the court at the end of the bench, took the loss hard.

“I was bawling because it was too much for me,” Bickerstaff said. “I considered those players family and I knew even at that age how making the Finals would be a crowning achievement for my dad. That loss was too much.”

Visions of those tears remain tough for Bernie Bickerstaff to erase.

“That still sticks with me to see your kid that involved,” he said. “Obviously, he was so much into it that he felt bad for the team. He learned to have loyalty to those whom you work with.”

Bickerstaff would go on to play college basketball at Oregon State and Minnesota. Injuries stalled his aspirations for a professional playing career, but it jump-started his coaching career.

Bickerstaff joined the Cavs in May 2019 as an associate head coach. He became head coach in February 2020 after John Beilein resigned.

Bernie’s most proud of his son’s perseverance.

“He’s had some tough times, and he’s been in some tough situations,” said Bernie Bickerstaff, a senior adviser with the Cavaliers. “But he’s handled it professionally. And I’m impressed that when things are tough, he doesn’t give in and keeps fighting.”

Bickerstaff’s resolve is on display through a squad molded after his philosophical image. In the analytical world of “small ball” and a barrage of 3-point bombs, Bickerstaff starts three big men — Jarrett Allen (6-feet-11), Evan Mobley (7 feet) and Lauri Markkanen (7 feet) — who provide an imposing presence, especially on defense. The Cavaliers are second in the league in defensive rating (103.6) and points allowed (101.9).

“When you see that size play together, it makes it difficult on your opponents,” Bickerstaff said. “Evan and Jarrett are elite rim protectors, and it makes it hard for the opponent to score. And, offensively, those guys have enough ball skills to space the floor. We’ve found an advantage in going the opposite of where the league is trending.”

Allen averages 17.3 points, 11.2 rebounds and 1.3 blocks per game. He’s long and has the strength and agility to play inside and out.

Mobley, the No. 3 overall pick in the 2021 NBA draft, is a front-runner for rookie of the year. He’s among the league leaders in blocks, and his ability to defend guards on switches is a major bonus.

Markkanen, acquired from Chicago in a three-team trade in the offseason, plays small forward for the first time in his five-year career. He may not have the speed of most small forwards, but his length causes the opposition trouble.

Guard Isaac Okoro’s defense was on display recently against Minnesota, where he held dynamo Anthony Edwards to eight points below his average.

Ricky Rubio, acquired in the offseason, has stabilized the offense off the bench and provides guidance for third-year point guard Darius Garland, the team’s leading scorer.

Bickerstaff is all too familiar with the big lineups his dad’s teams faced in the ’80s, so what he’s doing now with the Cavs isn’t new.

“Those Celtics and Lakers teams with [Larry] Bird and Magic had a bunch of size, but they were extremely skilled,” Bickerstaff said. “I’m not comparing my guys to them, but we feel we have some really skilled guys. Size with skill will beat small all day.”

Five-time All-Star Kevin Love now comes off the bench, providing an offensive spark, and is playing the best defense of his career. He’s also been a mouthpiece for Bickerstaff to the younger players. The two go back to when Love entered the league with Minnesota. He’s familiar with Bickerstaff’s ways, which are reflected on the weight room walls.

“Those words are our ‘isms’ we live by,” Love said. “Whenever we come out of a break, we come out using one of those words. My favorite is ‘Details,’ because it’s those little things a young team needs to pay attention to, to find a way to win. Those five words characterize us as a team.”