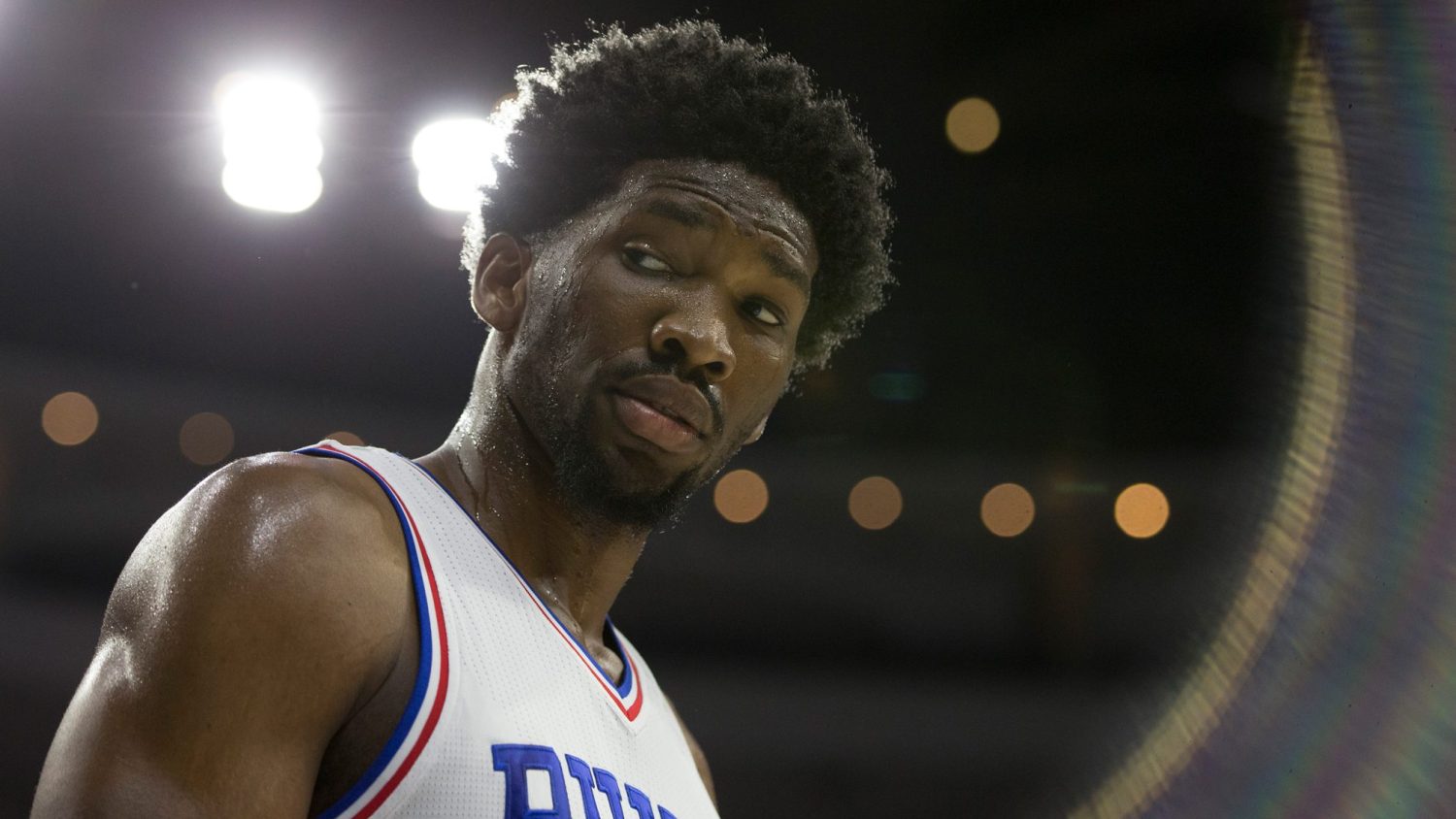 Joel Embiid #21 of the Philadelphia 76ers looks on during the first half against the Detroit Pistons at Wells Fargo Center on October 15, 2016 in Philadelphia, Pennsylvania. Mitchell Leff/Getty Images
NBA

After missing his rookie and second season, all eyes are on the Sixers star’s triumphant return

Joel Embiid often compares his life to a movie. Exactly what type of movie — fairy tale or horror film — depends on the time period over the past seven years.

The Philadelphia 76ers center started at age 15 in perhaps a fairy tale. It next became a horror movie for personal and physical reasons. And now, with the arrival of his first NBA game in his third season, the 7-footer from Cameroon appears to be having a Hollywood ending with several sequels yet to come.

Embiid was born in Yaoundé, Cameroon on March 16, 1994. He originally had dreams of being a professional volleyball player, but started playing basketball at age 15 with a close eye on mimicking Hall of Famer center Hakeem Olajuwon of Nigeria.

Embiid was discovered at age 16 at a basketball camp hosted by current Los Angeles Clippers forward and Yaoundé native, Luc Mbah a Moute. With Mbah a Moute later serving as a mentor, Embiid moved to the United States at age 16 to play high school basketball. As a senior at The Rock School, a Christian academy in Gainesville, Florida, the five-star recruit led the school to a state championship and signed with University of Kansas.

Embiid averaged 11.2 points, 8.1 rebounds and 2.6 blocks as a freshman during the 2013-14 season with Kansas, but missed the NCAA tournament due to a stress fracture in his back. Despite surgery on his right foot six days before the draft, the Sixers drafted him third overall in 2014. Embiid ended up missing the 2014-15 season due to the broken navicular bone in his right foot.

“He was trapped in something that wouldn’t let him compete,” Philadelphia 76ers coach Brett Brown told The Undefeated. “He couldn’t play. And he’s highly competitive. He just was at times very frustrated. And to get him to understand all the dietary challenges and appointment challenges and to motivate him to stay on track educationwise in the video room where, although he couldn’t play, you wanted to move him forward.”

The pain of missing his rookie season didn’t compare to the hurt Embiid endured when his 13-year-old brother, Arthur, died on Oct. 16, 2014, after being hit by a truck.

Brown, then-general manager Sam Hinkie and Mbah a Moute, who was then with the Sixers, missed an exhibition game with the Boston Celtics to console the 20-year-old. Embiid went to Cameroon to attend the funeral of his brother, whom he had not seen since he emigrated to the United States. He said he thinks about his brother every night when he prays.

“When I lost my brother, that was the hardest part,” Embiid said. “I thought about some things I should have done. I thought about quitting basketball, go back home and just quit everything and just take some time off. I don’t think I would’ve had the heart to do it, but I thought about it.”

Embiid also missed his second NBA season after having surgery on his right foot on Aug. 18, 2015. There were questions about his weight and work ethic. He raised eyebrows for rehabilitating in Doha, Qatar, at an orthopedics and sports medicine hospital. Embiid did not play during the NBA summer league in July either. Outside of the Sixers, optimism was low.

With the Sixers’ reputation as the NBA’s worst team, Embiid felt he took “unfair” criticism for missing his first two seasons to injury.

“As athletes, we can’t control it,” Embiid said. “Having fans and everybody in your ear talking about, ‘You haven’t played a game.’ or, ‘You’re always hurt’ and other stuff. It was hard.

“I did all I could have done. I couldn’t control this the way I wanted. I worked my a– off and I’m glad I was finally able to play a game … Just getting to the league and being the No. 3 pick, I felt I had a chip on my shoulder. For people to just bash me because I was hurt and not being able to play. I wasn’t able to show them what I could do.”

Embiid finally wore a Sixers uniform for the first time during a preseason game against the Celtics on Oct. 4. He showed promise, scoring six points, four rebounds and two blocks in 13 minutes. Embiid proved that he had potential to be a force in the last five of the seven preseason games he played, averaging 13.8 points and seven rebounds in just 15.6 minutes per contest.

Embiid saved his best preseason contest for last, earning 18 points on 8-of-16 shooting and nine rebounds in 18 minutes during a 113-110 win over defensive-minded center Hassan Whiteside and the Miami Heat on Oct. 21. With that performance, Embiid instantly went from bust to a potential NBA Rookie of the Year candidate.

“For the people that watched the preseason, I got better game by game,” Embiid said. “I still have a lot to learn offensively and defensively … defensively, I started to learn the game comfortably. I was getting easy buckets.”

Brown said Embiid is such a unique scorer that he can’t think of a comparison. The coach also described the rookie as “the crown jewel and centerpiece to our defense.”

“He’s got such a variety of ways to score that I can’t really point at someone and say, ‘He’s really like this,’ in totality. He does pieces of different people,” Brown said.

Embiid joked about his minutes restriction when the possibility of being a NBA Rookie of the Year candidate came up. Brown will limit him to five, four-minute stints per game for the time entering the season. There is no definite timetable for the minutes to be increased, but health and performance could help his cause.

Heralded Sixers rookie forward Ben Simmons, the top pick in the 2016 NBA draft, might have received more NBA Rookie of the Year buzz if he didn’t suffer a broken bone in his right foot. The former Louisiana State star is expected to return to action at the beginning of the year. After having his spirits challenged for two years, Embiid has been trying to lift Simmons up.

“The only advice I got for him is not to rush anything,” Embiid said. “Take your time … I’m sure the organization won’t try to push him back on the court.”

Sixers and NBA fans will finally get to see Embiid debut Wednesday night. With a life reminiscent of a movie, he is hoping for rave reviews against the Oklahoma City Thunder and for many games to come.

“To now see the release, to be able to go on the court after a few years off the court and compete and take that competitive nature and have it unleashed,” Brown said. “As well as having grown up and seeing the world a little bit differently after these few years … I enjoy his company. I enjoy coaching him. I coach him hard. He lets me coach him hard. And you just see something in him. Great potential.”