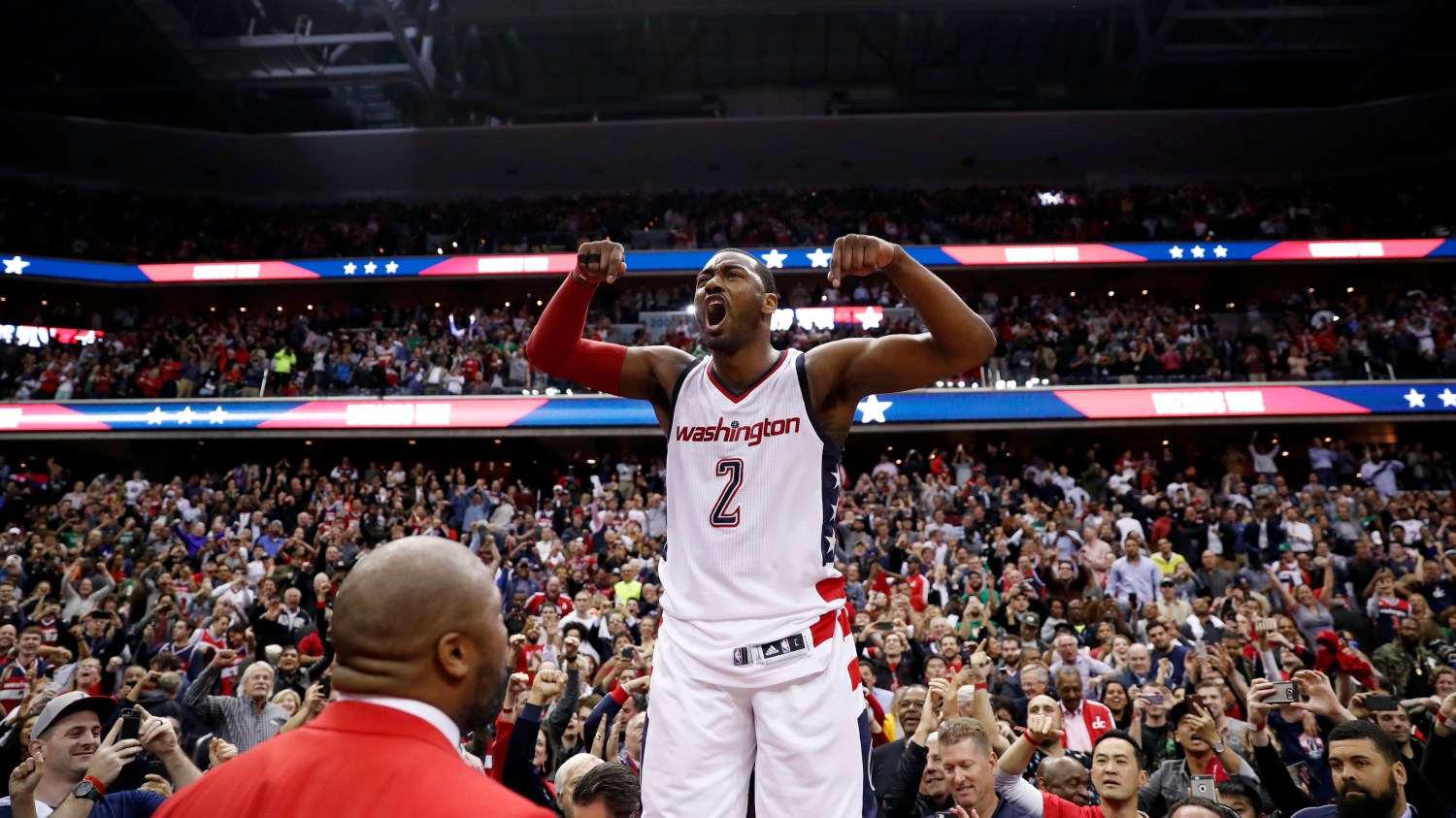 His first instinct, after the final horn sounded, was to find and embrace his crew seated in the courtside seats just across from the Washington Wizards’ bench. Then John Wall made a mad dash to the sideline at center court, leaping onto the scorer’s table and raising his arms high in the air. The crowd roared, with some in the stands bowing down to the man who saved their season.

With 3.5 seconds left, Wall hit the biggest shot of his career — a 3-pointer over the extended arms of Boston Celtics guard Avery Bradley, who had the Wizards All-Star guard frustrated for much of the night — to lift Washington to a 92-91 win in the Eastern Conference semifinals Friday night at the Verizon Center. The Wizards forced Game 7 on Monday in Boston.

Wall, in his seven years in the league, had never hit a go-ahead 3-pointer in the final 10 seconds of a regular-season or playoff game. His shot ended a streak in which Washington had lost seven straight elimination games at home.

It also went against the norm of this year’s playoffs, in which home teams were 0-10 in elimination games.

“We came in here with the mindset that we wanted to play great,” Wall said.

Wall was far from great in the first half — in fact, he was James Harden bad — when he missed eight of his first nine shots and scored just three points. When the Wizards blew a 10-point lead to a Boston team that shot just 35 percent from the field in the first 24 minutes, it appeared the Celtics were appropriately dressed when their players walked into the arena wearing all black (mimicking the Wizards, who dressed in all black for a Jan. 24 game against the Celtics, signifying a funeral).

But Wall started to heat up in the second half, scoring 13 points in the third quarter and 10 in the fourth.

While the Wizards and Celtics provided a rare close game for this postseason (each of the previous five games in this series was decided by double digits), this was far from a classic. The Celtics shot poorly for most of the first half (they shot 23.5 percent in the first quarter and still trailed by just five), while Washington was plagued by blown defensive assignments throughout the game and started the second half missing nine straight shots.

The Wizards brag about having one of the best backcourts in the game in Wall and Bradley Beal. And Boston has one of the most explosive guards in this year’s postseason in Isaiah Thomas. But the guy who was consistently the best guard for most of the game was Bradley, who scored 27 points while being the primary defender who kept Wall bottled up most of the night.

But it was the big-name guards who made the big plays in the final minutes. Thomas, who was also contained most of the night, scored 10 of his 27 points in the fourth quarter. He scored seven points during one 2-minute, 34-second stretch late in the game, and his 3-pointer with 2:08 left gave the Celtics an 87-82 lead.

A 3-pointer by Beal with just over a minute left cut Boston’s lead to 87-85 and was significant because he had missed his first seven 3-point attempts prior to that shot. Beal had become hesitant just before Thomas gave the Celtics the five-point lead, as he had an open look from beyond the arc in the left corner and passed up the shot.

“We passed up five or six 3s,” Wizards coach Scott Brooks said. “During a timeout I told them don’t worry about taking them, worry about making them. With Brad, he missed his first seven. In my mind he’s hot now, and he’s going to make the next one.”

The shot by Beal, who carried the Wizards until Wall showed up, gave his team life.

Wall’s shot with 3.5 seconds left gave hope to a team that, along with the Cleveland Cavaliers, is the only franchise in the Eastern Conference to advance to the semifinals in three of the past four seasons.

But the Cavaliers get all the respect, deservedly, for reaching the NBA Finals the past two years. Being linked with Cleveland is meaningless when you consider the Wizards haven’t been to a conference final since 1979.

To advance to the Cavaliers Invitational, which begins Wednesday, the Wizards would have to win in Boston, something that hasn’t happened since the 2013-14 season. In this series, the Wizards have lost the three games in Boston by a combined 44 points.

The Celtics were hoping to finish off the Wizards on Friday night, hence the black outfits, although Thomas shrugged off any meaning behind the outfits.

“I wear black all the time,” Thomas said. Asked whether everyone wearing black was a coincidence, he responded, “I guess so. Call it what you want.”

Celtics coach Brad Stevens was brief with his team after the game, simply telling them, “Game 7 on Monday.”

The players appear ready to embrace the moment.

“I’ve never been in a Game 7. I don’t know what it’s like,” Thomas said. “That’s where all the great players make their name; that’s where legends are born. Game 7 in Boston, we wouldn’t have it any other way.”

There wouldn’t be a Game 7 if not for the late-game heroics of Wall, who, on a night when he threatened to take the heat off Harden, made the most meaningful shot of his life.

“Our goal is to get to the conference finals. If we didn’t get to a Game 7, it would have felt like a failure,” Wall said. “I’m enjoying this moment now, but after tonight I’m locked in for [Monday]. It’s only right that this goes seven.”

Asked about hopping onto the scorer’s table after the game, Wall smiled.