JR Smith, now a member of the N.C. A&T golf team, looks forward to competing and earning his degree

Smith, 35, was cleared to play by the NCAA

GREENSBORO, N.C. – JR Smith’s dreams of becoming a student-athlete have now come true. He was joyful Monday talking about being cleared by the NCAA to play golf for North Carolina A&T State University.

“It was probably one of the most exciting feelings I’ve had in a while,” Smith, 35, who retired from the NBA after winning his second championship in 2020, told The Undefeated in an exclusive interview. “I really didn’t know how it was gonna go. I hear so much about the NCAA all the time how they’re doing this, and they don’t know what they want to do with that, but to be able to actually call myself a student-athlete is a great feeling.”

Smith has already enrolled as a student at the university and is studying to receive a bachelor’s degree in liberal studies. He’s enjoying his time being a true college freshman.

“My favorite class I think right now in my life was African studies is liberal studies,” Smith said. “We’ve had discussions and introductions and I did my first PowerPoint yesterday. My schedule is pretty open, because my classes are online. So, I should get due dates, and I gotta get to work and figure it out.”

N.C. A&T’s liberal studies curriculum is ranked second out of the top 10 programs at historically Black colleges and universities. This opportunity was no small decision for Smith, and he has big goals as to how he wants to use his degree.

“One of my biggest goals is to get more kids into golf,” Smith said. “I would love to be able to teach them educational things about life as well because I’m very passionate about mentorships. At the end of the day, my goal is probably to create almost like a STEM [science, technology, engineering, and math] school, but around golf for kids. I got four girls myself, and they started to pick up the game. They really love it. So that would be fun.”

One of the main influences in Smith’s decision to attend college came from a conversation he had with former NBA star Ray Allen. “I was asking him what does he do all day with being retired and stuff like that,” Smith said. “He said the challenge for him is to go back and challenge his mind, challenge his courage if he can actually do it and maintain it. And he’s actually working with his master’s now. So, it was very inspirational.”

Smith attended high school in New Jersey and sports was his main focus, so academics were a blur to him. “I didn’t really take it serious,” Smith said. “But now I’m fortunate because I get to go back when I want to go back and it’s all on me. Nobody is making me go to class. Being able to attack the classroom with a new mindset is a really beneficial thing for me because I actually get to be receptive to the information that I’m receiving.”

N.C. A&T golf coach Richard Watkins said Smith has been criticized for taking away another athlete’s spot on the golf team and possibly taking a scholarship. But Watkins said Smith is not on scholarship, is paying his own way in school and the only thing asked for was an opportunity to try out.

A 6-foot-6 guard, Smith had committed to play basketball at the University of North Carolina for Coach Roy Williams, but he chose to enter the 2004 NBA draft and was selected by the New Orleans Hornets. Smith retired after winning the championship with the Los Angeles Lakers. He won his first ring with the Cleveland Cavaliers in 2015, both times with teammate LeBron James.

Outside of academics, Smith has big goals that he would like to achieve. 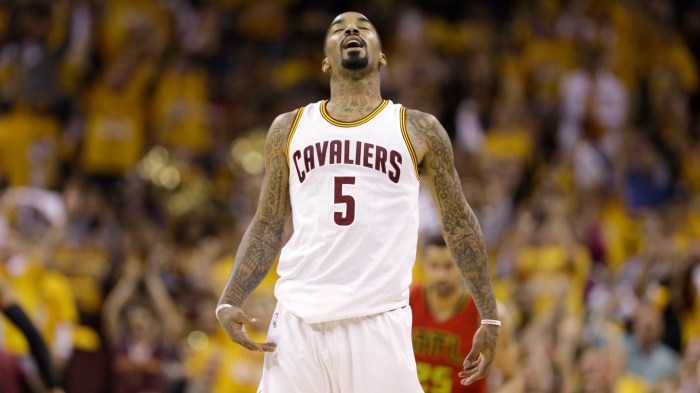 “By time my senior year, I want to be All-American,” Smith said. “I want to be one of those guys who, you know, people look up to, as a headliner for tournaments when people come to play. One of my biggest goals is to continuously try to recruit and help get people here who have the talent and capabilities to actually, you know, keep going.”

It’s been quite an experience for Smith so far. In early August, he played in the Wyndham Championship Pro-Am, where he was able to compete alongside future teammate Christyn Carr.

“It was amazing,” said Smith. “Christyn was one of the first teammates I met and to actually watch her play was amazing. I played with Rickie [Fowler] before. I played with PGA pros before. But to actually watch her play, how she hits the ball and play with such precision. Talking about her swing thoughts. And what she goes through is, it was more educational watching her than watching when I was watching the pros.”

“Athletic competition at very high levels is an earned privilege. If you don’t earn it, you don’t get to do it. And that’s in an 18-year-old’s case, or 35-year-old’s case. If you don’t earn it, it’s not just granted to you. And from a coaching standpoint, me and J already had this discussion,” said Watkins. “There’s only two ways for a team to get better. Even the players that they have, have to improve, or coach has to go out and get better players. So, he’s not being given a spot because he’s JR Smith.”

Smith confirmed that he lives in Greensboro and is looking for a place that fits just right. “I want to be on a golf course, but at the same time, I want to live in more of a dorm status or apartment, so I feel like I’m in college, as opposed to having some house that I was in for four or five years, like an MBA or something. So, yeah, near people to have more intimacy.”

Overall, Smith has been enjoying his time at N.C. A&T and the Aggie community is very happy to have him.

“Everybody’s been really welcoming. Some of the students were still shocked thinking they weren’t gonna see me or wasn’t expecting to see me. So, it’s been really great. Because at the end of the day, I want to do better at school as well as on the golf course. And I’m pretty sure a lot of the students around here feel like that. So as long as I can keep inspiring them, and I’m not dragging them down or pulling them back and keep pushing them up, then I’m doing what I’m supposed to do.”

He’s earned his way onto the team

Watkins said it’s important to note that Smith was treated as any regular student-athlete throughout this process and that his arrival has had no negative impact on the Aggies golf team.

“Having him on the team is just like adding any other top-quality recruit. And just like any other recruit coming in, they’re looking for a spot. And they want to take your spot and your job is to not let him, so that internal competition is going to make for a better and stronger program,” said Watkins. “So, not just because his name is JR Smith, his golf game is going to make our team better, because it’s going to improve the level of internal competition.”

Smith’s journey to become a student-athlete was no smooth sailing, said Watkins.

“The first phone call came from CJ Paul, Chris Paul’s brother,” Watkins said. “He told me, ‘I want to introduce you to somebody. Somebody, you know, wants to walk on.’

“I just simply told him that three things, as a head coach, that were immediate concerns: No. 1, could we get him eligible? No. 2, could we establish his amateur status? No. 3, can he help my golf team be a better team? And, you know, if, if he can’t help us be better, just like anybody else, I’m not interested in you. If you can help us be a better team, then we can talk. But if you can’t help our program, be better in competition, then I’m not interested.” 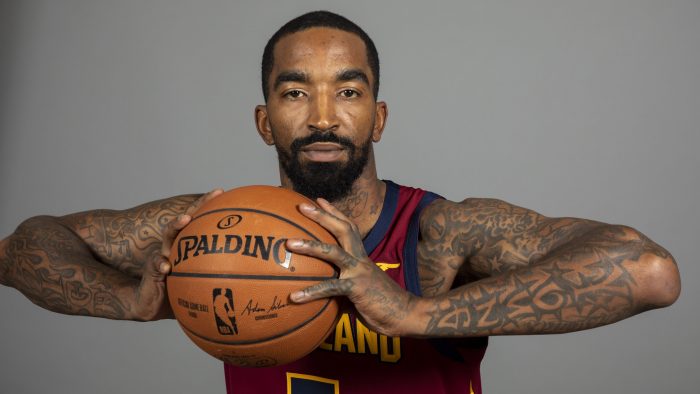 Smith has played frequently while in Greensboro and has shown promise to his teammates, and they attest that he can help contribute to making the Aggies golf team better.

Carr, 21, is a senior nursing student at N.C. A&T and is a member of the Aggies women’s golf team. Carr observed Smith during the Wyndham Pro-Am and saw the skills that he had to offer.

“He’s such a really, really down-to-earth person, very humble and he loves golf. You can tell and he’s gonna work really, really hard at it,” Carr said. “He already has so much discipline from playing in the NBA. So, I think that’ll be able to help us all just to see how hard he works and to be able to push us.”

Golf is not just a hobby for Smith but something he takes seriously, and his teammates can see that as well. “He’s on a golf course, all day, every day,” Carr said. “If he’s not in class, he’s on the golf course.”

There have been talks about Smith’s ability to perform with a 5 handicap. However, that does not mean much to Watkins.

“That number to me in terms of collegiate competition, that number to me is fairly irrelevant,” Watkins stated. “Because in most cases, I don’t know under the conditions in which that handicap was established.”

The more important things to focus on are Smith’s ability to play and which skill set he specifically brings to the game, he said.

“From time to time, I’ve described him as a, a good NBA golfer. But JR is a good player,” Watkins said. “He has some tools that will enable him to be a good college player. No. 1 is his length. He hits the ball a long way and he has more than sufficient distance to play any golf course that we will play comfortably. I’ve got a couple of guys on my team that are good players, my No. 1 and No. 2 players, Diego Gonzalez and Xavier Williams. And both of those guys are significantly long. And JR has the same type of length, the same type of distance that those two guys have. So, he can shorten up a golf course and that just simply makes golf courses easier to play.”

Smith’s play will bring a lot of attention to A&T’s golf program. “Until this year, no one even knew we really had a golf team,” Carr said. “I would be walking around with a golf T-shirt, and people be like, ‘Oh, you play volleyball?’

“It happens all the time. So, to have more media, more coverage and people knowing about it, even though it can be nerve-wracking, it is still so important for the game of golf and for A&T’s program,” she said.

The first competition for the Aggies men’s golf team will be the Black College Golf Coaches Association Invitational in Newnan, Georgia, Sept. 24-25, followed by three other fall tournaments. They resume play in March.

The women open in the Elon Phoenix Invitational Sept. 19-21 and will play a fall and spring schedule.