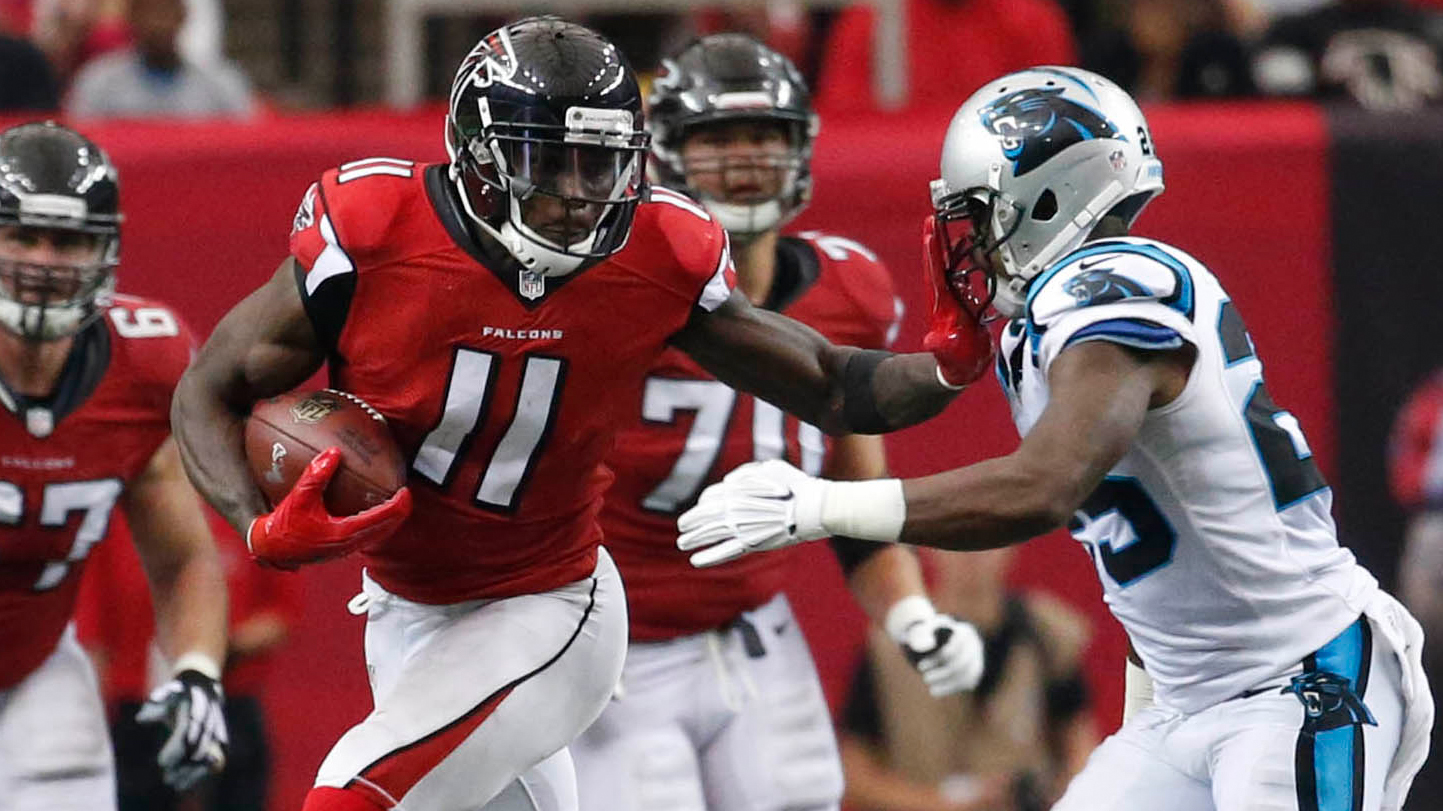 The doubters – and trust us, there are a lot of them – will remind you that the Atlanta Falcons were in a very similar position just one season ago. The Falcons ripped through the early part of their schedule back then, too, and it appeared Julio Jones was on the fast track to owning one of those gold Pro Football Hall of Fame jackets. And then the Falcons’ second-half collapse happened, so, yeah, this could still end badly.

But throwing away last season’s meltdown and completely putting aside the argument to exercise caution so early in the season, it can be clearly seen that what happened Sunday afternoon in Atlanta was, well, paradigm-shifting. The Falcons took it to another level and completely dismantled the reeling Carolina Panthers, becoming the first team in NFL history to have both a 300-yard receiver and a 500-yard passer in the same game.

And Jones’ record-setting 12-catch, 300-yard opus provided the foundation for a 48-33 victory that left you wondering: Did the Panthers forget that Jones is that dude?

The Panthers owe their fans answers after Jones was isolated in coverage way too often against the hopelessly overmatched cornerbacks Bene Benwikere and rookie James Bradberry, who weren’t given much help against the first-team All-Pro who in 2015 tied for the league lead in receptions and topped the NFL in receiving yards. What was up with that?

All kidding aside, it was hard to tell.

Even Jones seemed stunned to face single coverage for most of the game. Not that he was complaining. “Especially against [an NFC South] opponent, to play me one on one?” he said, genuine confusion evident in his tone. “We just took advantage of the man-to-man to make explosive plays.”

Perhaps Carolina’s safeties were supposed to provide deep help and simply forgot. Maybe the Panthers intended to bracket Jones on every snap, but someone dropped the ball (Jones certainly never did). Or, and this would be surprising, Rivera and his top lieutenants on defense figured that Benwikere and Bradberry would fare well in press coverage against Jones and the rest of the Falcons’ receiving corps. That way, the Panthers could load up (which they did) against one of the game’s most productive rushing attacks.

Rivera, though, didn’t spill about the failed strategy. After watching Jones run free all during the game, he had no interest in revealing – and reliving – all that went wrong.

He got that much right. Jones became the sixth player in NFL history with at least 300 yards receiving. In his sixth season, Jones now ranks sixth on the all-time single-game list. Flipper Anderson set the record – 336 yards – while playing for the Los Angeles Rams against New Orleans on Nov. 26, 1989.

Jones, according to research by the Falcons’ media-relations staff, is the only player to have at least 250 yards receiving twice in an NFL game. He had 259 yards against the Green Bay Packers on Dec. 8, 2014. Jones’ final reception Sunday was like the decadent dessert of a five-course meal.

After falling behind, 34-10, early in the fourth quarter, the Panthers pulled to within 34-26 with about four minutes remaining on the game clock. Atlanta took possession on its 25-yard line. Lined up wide left, Jones, who easily beat Benwikere off the line, cut inside and quarterback Matt Ryan hit him in stride at the 36. Then it was on.

Sprinting across the field from left to right, Jones brushed off Benwikere with a stiff arm around the 40. From there, Jones got to the right sideline and kept going, stopping only after he reached the end zone for a 75-yard touchdown. It was just as lit as you imagine.

“It looked pretty good from where I was standing,” said Ryan, who set a franchise record with 503 yards passing and also had four touchdown passes.

“When Julio gets the ball in space, he’s so explosive. He just finished that run so well. That was impressive to see.”

Meanwhile, on social media, Panthers fans were second-guessing the team’s decision to cut ties with All-Pro corner Josh Norman. After the Panthers rescinded Norman’s franchise tag, the Washington Redskins made Norman football’s highest-paid player at his position. It’s not as if Norman pitched consecutive shutouts against Jones. In two games against Carolina with Norman on the team last season, Jones had 16 catches – including a 70-yard touchdown reception – for 266 yards. But you’d think that Jones wouldn’t have had a guaranteed video-game performance if Norman still worked for the Panthers. Asked to share his feelings about Jones’ big day, Norman declined to take the bait. “I’m just gonna sip my tea on that one,” Norman told reporters after Washington’s victory over Cleveland.

There are currently only three names in the discussion for the title of NFL’s top wideout: Jones, Antonio Brown of the Pittsburgh Steelers and Odell Beckham Jr. of the New York Giants. In Atlanta’s Week 3 win over New Orleans, Jones was limited to one reception for 16 yards. “Last week, it was the run game, so it’s whatever we have to do,” Jones said. “If they [the Panthers] would’ve put two men on me or cheated a safety over, Matt would’ve made great reads and hit the other guys who were open. They singled me out today. Matt made great decisions.”

For Ryan, trying to link up with Jones is a wise decision no matter the coverage. “He played awesome,” Ryan said. “He was huge for us in critical situations and showed how great of a player he is. That was fun to be part of that.”

Over in the visitors locker room, problems were evident: The defending NFC champions dropped to 1-3. You couldn’t blame the Panthers for being in a fog last week. The recent fatal shooting of Keith Lamont Scott – yet another African-American man whose slaying at the hands of police ignited outrage in the black community – in Charlotte, North Carolina, sparked violent protests near the Panthers’ stadium. For the better part of four quarters at the Georgia Dome, however, the Panthers again played like their minds were elsewhere.

Quarterback Cam Newton never got into a groove. That’s been a big part of the story the past two weeks. And the reigning NFL MVP was removed with just under 12 minutes remaining in the fourth and has been diagnosed with a concussion. Newton held up a little before crossing the goal line on a two-point conversion, exposing himself to an unnecessary hit. Rivera is searching for answers.

“We have to find it in our character to head in the right direction,” Rivera said. “We have the experience. We will have to work through it and go forward.”

The Falcons marched forward on par with their 5-0 start last season. Now they’re 3-1 and atop the South with a fire-engine-red hot offense. But last year they also went 2-6 in their final eight games, finished 8-8 and missed the postseason.

On Sunday, Atlanta, which has the league’s top scoring offense, racked up another 571 total net yards. After some inevitable growing pains in his first year with the Falcons, offensive play-caller Kyle Shanahan seems to be in sync with Ryan. It shows. “Kyle did a great job dialing up plays all day. He stayed aggressive,” Ryan said. “But at the end of the day, it comes down to Julio making plays.”

And tuning out the doubters.