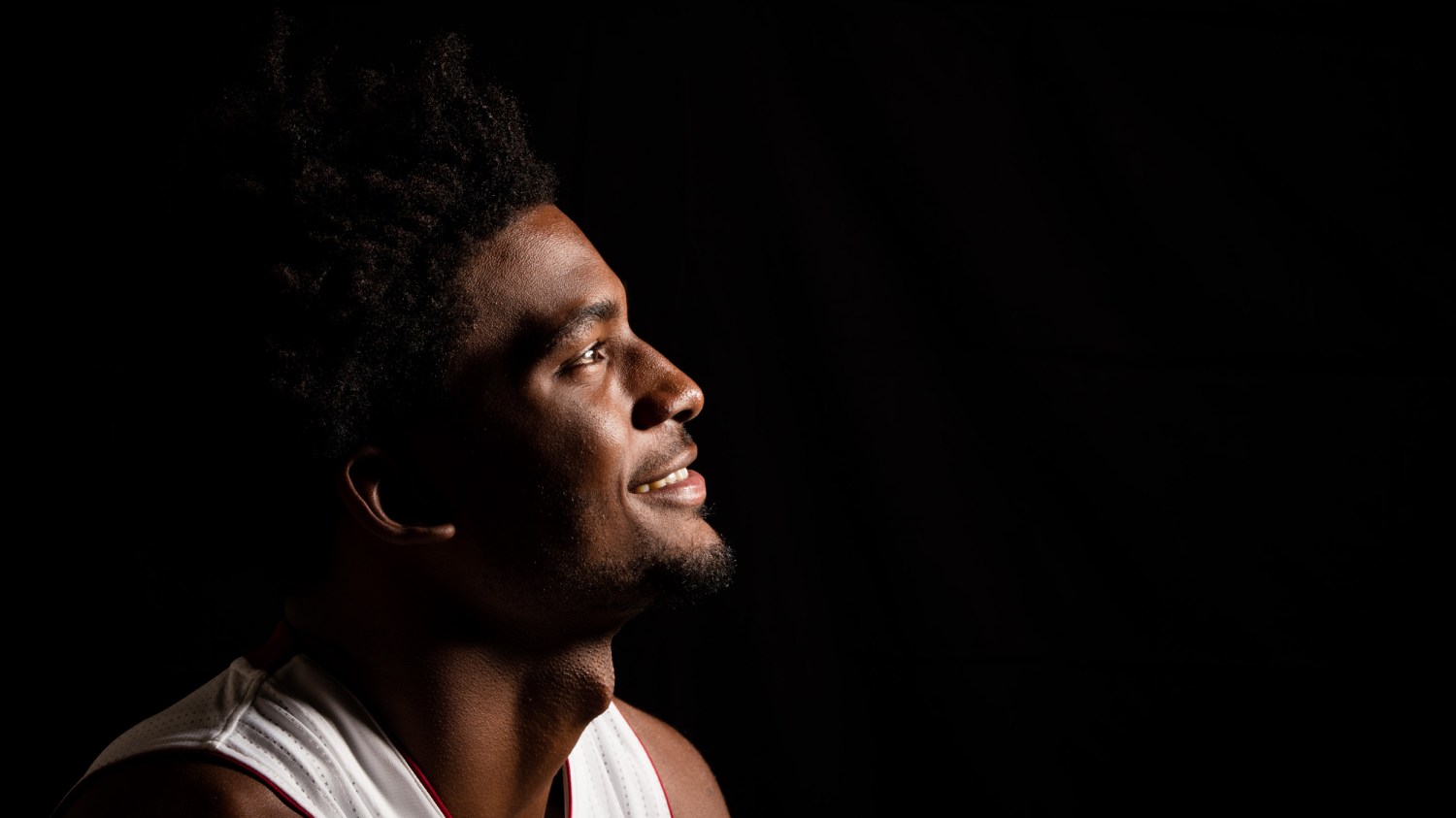 The art of the game: The Justise Winslow Collection

Miami Heat forward Justise Winslow is averaging 11.6 points, 4.7 points and 3.9 assists in his second season in the league. But while the former Duke University star’s focus is on his budding NBA career, his off-court pastime has been his growing love for art and building his own collection.

“I like something that is obviously appealing to the eyes, nice aesthetically, but has a deeper meaning,” Winslow recently told The Undefeated. “Something on the canvas that has a meaning, a point, makes you think. But also, something that you don’t get tired of looking at. I try to stay away from portraits or portraits of people. You get tired of looking at that face.

“I could never have myself as my background on my phone or anyone I really know. I’d just get tired of it. It’s almost better if it’s someone I don’t know, don’t recognize, an unfamiliar location, somewhere I’ve never been. It kind of keeps me engaged.”

Winslow’s basketball career and his evolving art interest have progressed hand in hand — and like any novice, he needed a knowledgeable guide. He was selected by the Heat with the 10th overall pick in the 2015 NBA draft in New York City. During draft week, he was introduced to New York-based personal art adviser, collector, private dealer and curator Gardy St. Fleur.

St. Fleur took Winslow to the S|2 gallery, an arm of the Sotheby’s Contemporary Art department, to enjoy a curated collaboration with music chosen by Grammy award-winning rapper Drake. St. Fleur introduced Winslow to the rapper and also introduced him to artist Derek Fordjour at the event. St. Fleur also made a point to introduce the baller to work from African-American artists such as David Hammons, Mark Bradford and Jean-Michel Basquiat at the S|2. Winslow also really liked the work of Lorna Simpson.

The two went on to exchange numerous texts about art, and St. Fleur later gave Winslow the 10-pound, nearly 600-page best-seller The Art Book while visiting his home in Miami.

“He was really excited when he saw the book. The book was a recap on art history and modern contemporary art,” St Fleur told The Undefeated.

Winslow has since hired St. Fleur to help him find his next painting and help him start his personal art collection.

Winslow’s college basketball career at Duke lasted just one season. He averaged 12.6 points and 6.5 rebounds as a true freshman during the 2014-15 season before going pro. The 2014 McDonald’s All-American selection made the best of his time at Duke, as it won the 2015 NCAA Division men’s basketball championship. He also found a passion for something besides basketball in Chapel Hill, North Carolina, after being introduced to some artistic co-eds.

While hanging out at a living group duplex house he said was called “The Church” near campus where eight college artists lived, Winslow enjoyed watching documentaries with them. He also fondly recalled viewing the 2014 film Whiplash, which depicts the relationship between an ambitious jazz student and an abusive instructor, that “blew [his] mind.”

“They were a bunch of really smart, outside-the-box, like-to-have-fun kind of people,” Winslow said. “Whenever I got tired, wanted to get away from the basketball team, I would hang out over there to get some different scenery to get comfortable with. It was cool.

St. Fleur’s goal is to help educate and build prominent fine art collections to be shared with his clients’ families and eventually museums and public institutions as part of historical collections. He also scouts out the “right pieces” from up-and-coming artists in hopes that his clients can buy art that will be more financially-friendly with the potential to jump in value as its popularity grows.

St. Fleur said he is currently helping Winslow negotiate a fair bid for a contemporary art piece from a young African-American female artist. St. Fleur said he told the artist that her work would be in “The Justise Winslow Collection.” The art connoisseur said he and Winslow are working “on a few things right now” and he wants to make sure his client feels comfortable with his first big art purchase.

“I’m not a car salesman. I’m not pushing them to buy right away,” St. Fleur said. “I’m trying to differentiate the value in art work. Why is it good to buy this piece or that piece. I help them buy the right pieces from emerging artists that are in art school. Get more value for your buck.

“A guy could spend $1,000 on a valuable artist from a great art school. Down the line it will be more valuable. My job is to educate guys on why this is art.”

Winslow said St. Fleur is showing him a lot of affordable, “young hipster” up-and-coming artists. He also credited St. Fleur for aiding his growth and knowledge in the art world.

“Right now, I really can’t afford the top echelon stuff,” Winslow said. “He is trying to help me find a couple artists that are on the rise that I can stick with, watch them grow and just get some of their pieces now while they’re young and see them go up in value.

“He is helping me understand the value of art. Some of the stuff you see on the street looks cool, but it doesn’t have much value. He is helping me see past the showmanship and get the stuff that really has value.”

So just how much is Winslow open to spending on art?

“You can’t really put a price on something that really speaks to me,” Winslow said.

“But I’m not about to go crazy over anything. I like the younger generation, the millennials. The things they come up with are different. It’s new, it’s outside of the box, whether it’s different ways that they build a sculpture or a structure and turn it into a piece of art.”

Winslow says his art collection currently consists of five pieces: two are in Houston, three are in Miami and two were gifts. His favorite piece is a birthday gift that is a framed T-shirt with art and the word “BASQUIAT” painted on it in tribute to the late artist.

He has considered buying a bronzed gorilla art piece in tribute to Harambe, the gorilla shot and killed at the Cincinnati Zoo after a child fell into his enclosure in late May. He would also like to add a sculpture inside the entrance of his Miami home and have two couches artistically painted. The 20-year-old also enjoyed seeing a piece of art using colored Post-It notes to construct rapper Kanye West’s profile. He also has a budding interest in being involved in making film documentaries and loves photography.

“It really makes the house in a way, the art and the furniture. The art just gives the house some context to it and adds value.”

The Justise Winslow Collection has the makings of something special in time for the budding Heat standout. He already loves the reaction he gets from the people who see it for the first time.

“It makes you feel like you chose the right thing,” Winslow said. “It’s sort of like a girl. If they stop and pause and are in admiration of her, it’s the same thing as art. It’s nice that people appreciate it. Nice to think that you have good taste in other people’s eyes.”

Heat coach Erik Spoelstra said that although the 6-foot-7, 225-pounder is just 20 years old, he is not surprised by his growing love for art because of his high maturity level.

“Justise is unique for a 20-year-old,” Spoelstra told The Undefeated. “You’re talking about a 19-year-old teenager coming into a veteran team fitting right in. You can see he viewed the world and his profession from a very mature lens. Most teenagers coming into the league are focusing on other things.

“He is focused on winning, learning his craft and trying to be better in his profession. He’s found other interests off the court. I’ve found him very refreshing in this business.”