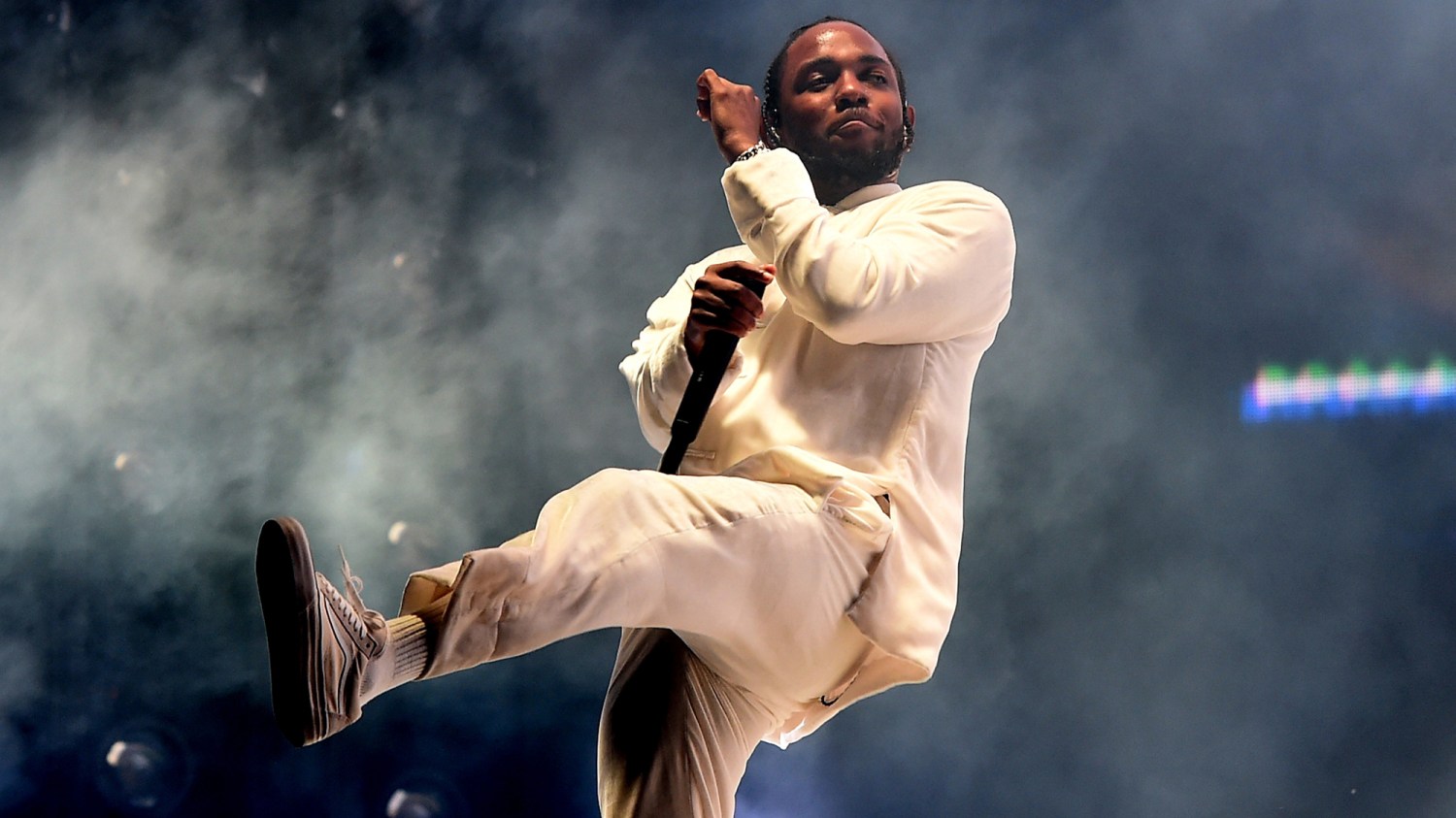 Kendrick Lamar’s ‘DAMN.’ good run places him face to face with the president

Fifteen-year-old Kendrick Lamar likely never thought he’d be performing at halftime of one of the biggest sporting events of 2018. Certainly not when he, as a teenager, was getting stomped at Compton, California’s, Avalon Swap Meet. But a decade and a half after the fight he references on “ELEMENT.,” from 2017’s Grammy-nominated album DAMN., here he is: headline performer at halftime of the college football national championship — the NCAA’s Super Bowl. The all-Southeastern Conference main event is Monday night in Atlanta.

Forbes placed Lamar on its December 2017 cover, lauding the “antisocial extrovert” for his business decisions such as ending his long relationship with Reebok and launching a new collaboration with Nike. Lamar’s tour dates routinely gross more than $1 million per night. And in 2017, not only did he surpass even Beyoncé and Bruno Mars with more than 2 billion radio spins, but Lamar also had five of the most streamed songs of 2017. And while his 2012 “m.A.A.d city” (featuring MC Eiht) is featured in the next week’s Den of Thieves, Lamar recently confirmed that he and his Top Dawg Entertainment are producing the soundtrack for Black Panther, led by a collaboration with SZA titled “All The Stars.”

All the stars are expected to flood box suites to watch the Quavo-endorsed University of Georgia versus the crème de la crème University of Alabama. This VIP list reportedly includes President Donald Trump. From self-doubt to self-proclaimed greatness, Lamar’s ascension coincides and often collides with the United States’ 45th president.

Trump, a frequent sporting provocateur, has been an occasional target of Lamar’s lyrics dating to 2015. So speculation is swirling: What will this moment mean between the lyrically sharp MC and verbal live-wire commander-in-chief? Lamar’s fellow Comptonite, and perhaps hip-hop’s most famous Trump antagonist, YG, has at least one suggestion for Lamar.

There is drama leading up to the moment. What statement will Lamar make? Will outside forces — the NCAA, sponsors or even Disney — attempt to define the parameters of his performance? Will he even make one at all?

Tell me what you gon’ do to me / Confrontation ain’t nothin’ new to me/ You can bring a bullet, bring a sword / Bring a morgue / But you can’t bring the truth to me.

Lest time forget, Lamar’s 2015 To Pimp A Butterfly is a fingerprint for an era defined by Black Lives Matter, police brutality and the final months of the country’s first black president’s administration. The record features a handful of Lamar’s most complex and analytical cuts: “i,” “Hood Politics,” “Mortal Man” and President Barack Obama’s favorite “How Much A Dollar Cost.” But undoubtedly, Butterfly’s star is “Alright.” It’s the generational equivalent to James Brown’s “I’m Black and I’m Proud.”

Presidential critiques aren’t foreign to Lamar’s catalog. Seven years ago, Lamar painted a picture of gangland Compton (decades before gentrification arrived) on “Ronald Reagan Era (His Evils).” 1987, the children of Ronald Reagan raked the leaves, he said of the generation directly affected by the legacy of the 40th president’s Reaganomics, Your front porch with a machine blowtorch.

The Obama era, for Lamar, brought reverence and clarity. The reality of a black president inspired pride and accomplishment. But he wasn’t blind to current and past issues: Streets don’t fail me now, they tell me it’s a new gang in town /From Compton to Congress, set trippin’ all around/ Ain’t nothin’ new, but a flu of new Demo-Crips and Re-Blood-licans, he opined on 2015’s “Hood Politics.” Lamar understood Obama’s power as president was in constant opposition with forces that sought to derail, override and neuter. Red state versus a blue state, which one you governin’? / They give us guns and drugs, call us thugs / Make it they promise to f— with you / No condom, they f— with you / Obama say, ‘What it do?’

Later that same year, while then-candidate Trump was still seen by some as a political punchline, Lamar addresses growing right-wing hysteria on “Black Friday,” saying, I’m the son of the pioneer that near the sun /Play with him / B—- you better off voting for Donald Trump.

A year later, in 2016, as Trump-mania gained indestructible steam, Lamar again directed his attention to the candidate nearly two months to the date of the presidential election. Might stay in the Trump Tower for one week, he rapped on “What’s Wrong.” Spray paint all the walls and smoke weed / F— them and f— y’all and f— me. In 2017, as the reality of a Trump presidency set in, Lamar observed.

Lamar is an atypical selection for such a widely viewed event. He’s not “safe,” nor is he “routine.”

In the coming weeks we can anticipate an impending marketing avalanche for Panther, perhaps “the biggest and blackest blockbuster of all time,” with Lamar a critical component. Later this month, the seven-time Grammy winner looks to add more with seven new nominations, including going head-to-head with Jay-Z for the evening’s most coveted award, album of the year. I said it’s like that/ Dropped one classic, came right back/ ‘Nother classic, right back/ My next album, the whole industry on a ice pack, he vowed a week before DAMN.’s arrival. The promise has him on the doorstep of Grammy history on Jan 28.

Trump, in Lamar’s eyes, is the complete antithesis of what his much-loved music is about, but in many ways he is a source of inspired frustration. And the nature of Monday night’s halftime performance, even with Friday’s free-to-all dress rehearsal, is difficult to predict. Despite his undeniable star power, Lamar is an atypical selection for such a widely viewed event. He’s not “safe,” nor is he “routine.” It easy to imagine part of Lamar’s performance being veiled shots: I know how you work, I know just who you are/ See, you’s a, you’s a, you’s a— / B—- ...

So, does Lamar feel the pressure to symbolically take a knee Monday night? I, for one, don’t think it’s wise to believe anxiety will play a part in Lamar avoiding The Elephant In The A. He and TDE are from Compton, a cultural ground zero where wearing the wrong hat, or walking down the wrong block with the wrong shoelaces, sometimes came with fatal consequences. A halftime show, by comparison, is a field trip to Calabasas, California.

Illuminating truth to power is daunting. Kanye West knew what would come of his comments about President George W. Bush, but he became a larger-than-life figure afterward. Colin Kaepernick understood that taking a knee would all but involuntarily retire him, but he is now the millennial Muhammad Ali. Lamar’s life has been one risk after another — a butterfly effect set in motion as documented in the mind-numbing odyssey “DUCKWORTH.,” DAMN.’s closing number.

Trump vs. Lamar is quite the undercard for Monday night’s main event. It could very well be a culture-shifting moment spearheaded by the man who has been bestowed with the heavy title of “voice of a generation.” Lamar is well-aware of the moment he occupies and times he’s become a voice for. His message to Trump could very well come in words, via actions or even purely via symbol. Does this mean halftime will be his Kanye West 2009 MTV Video Music Awards moment? Who knows.

Whether he decides to stir the pot, whether he fulfills YG’s wish, there is a reality evident about Lamar. Nothing looks to stop the momentum he’s built over the past year. Not even the president of the United States.