At the Kentucky Derby, Black jockeys and owners will cheer on Kendrick Carmouche

Carmouche is the first Black jockey in the race since 2013

The Kentucky Derby, for many jockeys, is comparable to a Super Bowl or the NBA Finals. The Derby is the pinnacle of their sport.

“When we’re in the jockey room and that race comes on, everyone stops what they’re doing,” said jockey Malcolm Franklin. “It gives me chills when I watch it.”

Saturday’s 147th Run for the Roses at Churchill Downs in Louisville, Kentucky, has brought on even more anticipation for Franklin, who will be cheering on his friend Kendrick Carmouche, the first Black jockey in the race since 2013 and only the fourth since 2000 when Marlon St. Julien became the Derby’s first Black jockey in 79 years. (He finished seventh.)

“I told [Carmouche] to also try to make history by winning,” said Franklin, winner of nearly 1,300 career races. “Kendrick winning can make a huge impact. It can open things up [for more Black jockeys].”

Carmouche, a Louisiana native, became a professional in 2000 at the age of 16. His father Sylvester rode professionally from 1978 to 2013. He retired at 54 after he suffered a broken neck. Carmouche will enter the race on Bourbonic, which he rode to victory earlier this month in the Wood Memorial. His horse was a 72-1 long shot.

Carmouche’s presence may not only inspire current and possibly future jockeys, but several Black horse racing owners hope to see an impact on ownership.

Especially Denver Broncos running back Melvin Gordon, who is involved with the DMM Holdings horse-investing company with Donald Malloy.

“This is dope,” Gordon said of Carmouche’s place in history. “This can show kids that you don’t have to play football or basketball to be successful at other things. And this can bring attention to more Black ownership.”

Malloy, who brought Gordon into the business, said Saturday’s moment has potential.

“A win means [Carmouche] can represent like Tiger Woods [does for Black golfers] and inspire more young jockeys,” said Malloy, who was introduced to horses by his grandfather. “But it’s not just about inspiring jockeys or future owners, but also for the people who take care of the horses. This is a profitable business on all levels.” 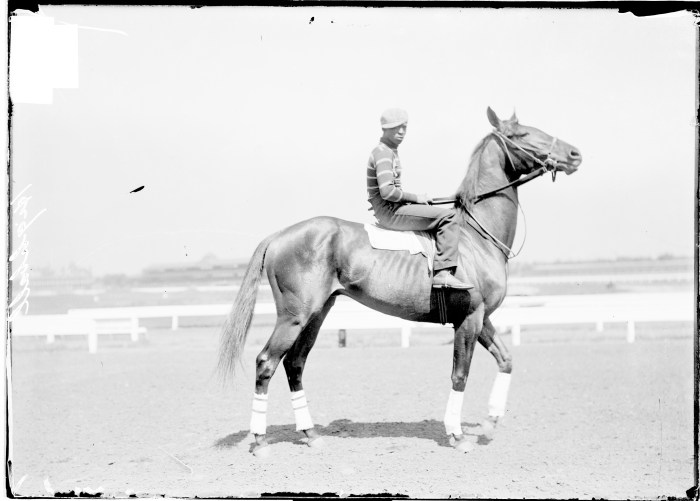 The Hidden (Black) History of the Kentucky DerbyRead now

For him, Saturday’s Derby is about how representation matters and how important it is for the world to see an African American jockey.

“And [it’s meaningful] from the standpoint of a casual fan looking and seeing an African American jockey and saying, ‘Hey, I may be too heavy to ride, but I want to participate at the highest stage and get into ownership,’ ” Harbut said.

Harbut, Wayne Scherr and fellow African American Raymond Daniels owned Necker Island, which finished ninth in the Derby last year. It was the first time in 13 years that a Black ownership group had appeared in the Derby.

Unfortunately, Harbut and his group could not fully enjoy their historic moment. The country was in the midst of the coronavirus pandemic and the race was moved from May to September and held without fans. And Louisville – and the nation – was in a fury over the death of Breonna Taylor, a Black woman who was killed in her home during a botched police raid.

Protesters asked Harbut not to participate in the race.

“We said then and we say now that we seek justice for Breonna Taylor and her family,” said Harbut, a resident of Lexington, Kentucky. “We wanted to create awareness and bring more minority owners in ownership. We had an opportunity to compete and show individuals within the community that we can be participants on one of the world’s biggest stages.”

For the second year in a row, the storyline for the Kentucky Derby will include Black people, which is especially gratifying for Harbut, who has a rich family background in horse racing.

His great-grandfather, Will Harbut, was the groom for Man o’ War, considered by many as the greatest racehorse of all time. Harbut’s grandfather, Tom, bred and owned a horse named Touch Bar that finished 11th in the 1962 Derby.

And due to racial segregation, Tom Harbut’s name did not appear in the program and he could not attend because Black people were not allowed to sit in the grandstands.

Which makes these changes even more important.

“Carmouche’s participation is a huge deal and, hopefully, more [Black people] will get into the business,” Harbut said. “Hopefully, one day it’ll come down to not necessarily being newsworthy that we have an African American jockey in the race, but more of a big deal when one actually wins, as we often saw in our history.”