American Son, the much-ballyhooed new Broadway production starring Kerry Washington, is a play about race, parenting and policing that doesn’t seem to know much about those things.

The best thing about it, by a long shot, is the set, an impressive structure with vinyl furnishings and fluorescent lights that aptly conveys the bleak, green-tiled utilitarianism of a police precinct erected in the 1950s.

Under the direction of Kenny Leon, American Son unfolds over 90 overwrought minutes on a dark and stormy night in the lobby of a Miami police station. An increasingly frazzled mother named Kendra Connor (Washington) is trying to locate her 18-year-old biracial son Jamal, and getting nothing but racist assumptions and condescending obfuscations from the rookie officer on duty (Jeremy Jordan). No one, not even Jamal’s white father, Scott (Steven Pasquale), seems to grasp the validity of Kendra’s desperate anxiety, dismissing it largely as faux victimization Black Lives Matter agitator claptrap.

At first, Kendra is alone at the station, having rushed over when Jamal failed to come home that night. Her husband, Scott, is an FBI officer who left his family four months earlier for his white mistress. Scott may be the most confounding figure in American Son: He’s somehow managed to live with his family for the whole of Jamal’s childhood without realizing that his son is (gasp!) black! Despite the onslaught of news stories of unarmed black children and adults being killed by police or self-appointed neighborhood watchmen, Scott refuses to allow reality, or the existence of his black son, to cloud his worldview. Instead, he engages in odious victim-blaming that inspires questions about how Kendra, a Ph.D. psych professor who grew up in Miami’s Liberty City housing projects, managed to spend 18 years raising a kid with him without ever discussing the effects of racism on their son. We are to believe that a shared appreciation for bourbon Manhattans, Cormac McCarthy and sex bound them together.

Sensing no danger, Scott is exasperated that his wife has summoned him to the police station in hopes of getting answers about their son. Even if J, as he calls him, has been arrested, Scott presumes that it’s Jamal’s fault for hanging out with other black boys his age, especially ones who wear hoodies, cornrows, baggy clothes and sagging pants. While Kendra name-checks Philando Castile and Tamir Rice, her son’s wardrobe is apparently cribbed from hip-hop style that was in vogue 20 years earlier.

Scott, a white man with a badge, is slightly more effective than his wife at getting information about what happened to their son and his car, but not by much. It’s not until police dashcam video of a traffic stop is leaked online that the likelihood that their son has been murdered begins to set in for both parents.

Perhaps American Son would have worked as a farce, one that included a jack-in-the-box that periodically pops up to say, “See what I did there!?” and a script that included stage directions to pause for audience gasps. Something like this:

The man with the FBI badge is actually Jamal’s white dad! (audience gasps)

The arresting officer and the lieutenant running things downtown are both black men and one of them has a serious boner for unchallenged authority and respectability politics! Even though they’re black! (audience gasps)

Jamal, who was unarmed, has been dead this whole time and the department has been giving his parents the runaround while coming up with an official story that will absolve it of responsibility for shooting him in the head!

The likelihood of such a farce being any more contemptuous than what was actually staged is fairly low. There is no grand meaning to be extracted by the end of the play. Washington executes Kendra as if she’s the target of a Christopher Guest send-up, screaming her lines in a one-note Theater Cadence. (Everyone shouts at one another in American Son, but even the most limber yogis would pull a muscle labeling such interactions as debate.) 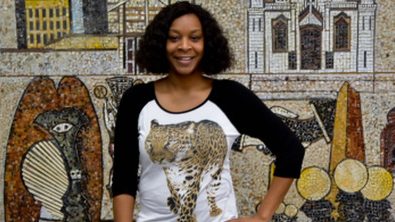 Playwright Christopher Demos-Brown’s script introduces characters who seem to have been grown in separate petri dishes before being thrown together strictly for the sake of forcing audiences to Think About Race and muse about How Everyone Is Equally Right, Even The Racists. In that way, American Son falls into the Crash Trap: Its characters do little besides parrot cable pundit talking points about race, policing and the killing of unarmed black people. Because these words are spoken in a Broadway play instead of a midday split-screen, they are assumed to contain a certain kind of bravery and truth-telling.

Dear reader, do not be fooled. You’d be far better served by a subscription to The Atlantic and a Twitter account.

To anyone remotely acquainted with the news, the end of American Son feels obvious and inevitable. A last cringe-inducing sob from Washington-as-Kendra is a fitting end to a play set too far afield from the truth.