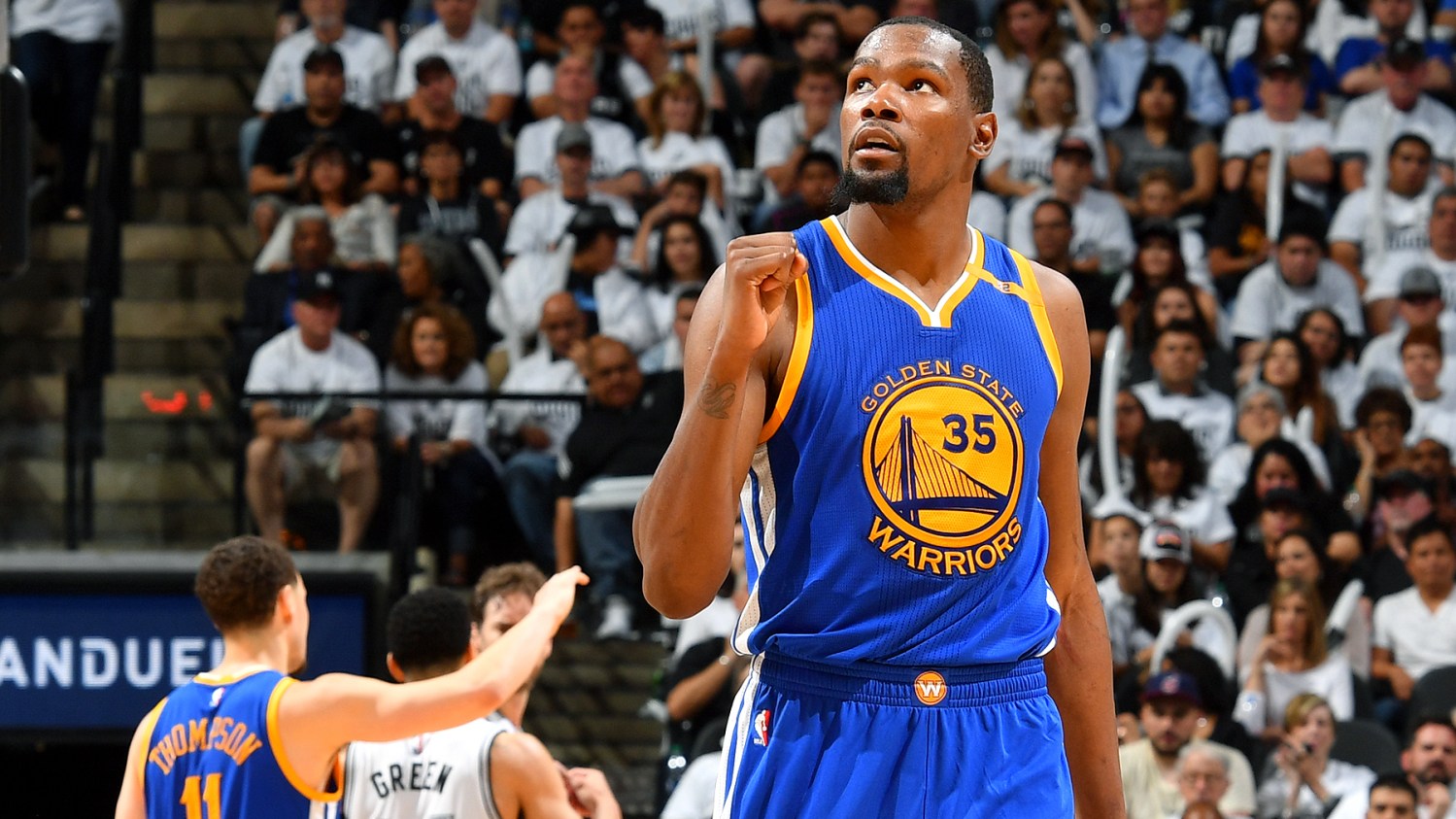 Kevin Durant #35 of the Golden State Warriors reacts during the game against the San Antonio Spurs during Game Three of the Western Conference Finals of the 2017 NBA Playoffs on May 20, 2017 at the AT&T Center in San Antonio, Texas. Jesse D. Garrabrant/NBAE via Getty Images
NBA

Kevin Durant says he made the ‘100 percent correct decision, win or lose’ to join Warriors

Kevin Durant kept it “100” about his decision to join the Golden State Warriors.

After a five-year hiatus, Durant is one win shy from returning to the NBA Finals with the Warriors. The Warriors can advance to their third straight Finals by defeating the San Antonio Spurs in Game 4 of the Western Conference Finals on Monday night. And with all due respect to his nine successful seasons with the Oklahoma City Thunder franchise, the 2014 NBA MVP has no regrets about his decision to depart as a free agent to the Warriors last offseason, regardless of what the near future holds.

“I made the 100 percent correct decision, win or lose,” Durant told The Undefeated after the Warriors’ practice at AT&T Center in San Antonio on Sunday. “I feel like this is the place I was supposed to be. I appreciate everything I’ve done before this. But I’m here now, and I feel like it’s a great spot for me to be.

“This is where I am supposed to be at this point of my life. I’m taking it on and conquering every part of it. I’m enjoying every single step.”

Durant played a big role in putting the Warriors in this position by scoring 19 of his game-high 33 points on 5-of-6 shooting from the field in the third quarter during a 120-108 win over the host Spurs in Game 3 of the West finals on Saturday night. Durant has scored at least 30 points in three of his past five playoff games. The first-year Warriors forward is also averaging 24.8 points, 7.3 rebounds, 3.7 assists and 1.2 blocks in 33 minutes per game in this postseason.

Toward the end of Durant’s 19-point third quarter versus the Spurs in Game 3, The Durant Company manager Rich Kleiman tweeted what he believed was a needed reminder about Durant.

So, what was Kleiman referring to?

“He hears the noise. He hears all of that stuff. He’s aware about what goes on in the Twittersphere, media and all that stuff,” Durant said. “I tried to tell him not to look at that. He watches [ESPN’s] First Take and all these shows. I try to tell him not to watch it, but he gets offended. He’s my brother. He gets offended when my name is not amongst the best players in the league or I don’t get the credit I deserve, I guess.

“He has my back. He always believes in my ability. Just like any other friend, he always has my back and he supports me 100 percent.”

Durant’s lone Finals appearance was in 2012, when he, Russell Westbrook, James Harden and the Thunder lost the series in five games to LeBron James and the Miami Heat. Assuming James and the Cleveland Cavaliers advance to play the Warriors in the Finals, Durant will have a chance to redeem himself against his superstar rival in the championship series. A Warriors championship would be a first for Durant and a second in three years for the franchise.

But even with Finals success, Durant doesn’t believe the pessimism will cease from his haters.

Durant also talked to The Undefeated about his contract situation, the challenge of being a win away from the Finals, his confusion over the media’s fascination with off-the-court news and more.

What does it mean to you to be a win away from the 2017 NBA Finals?

We just look at it as another step. Obviously, you want to be the last team standing. You definitely want to enjoy every moment, every step along the way. But you definitely know what the big picture is all about. We’re one of the last few teams playing. I’m definitely excited.

What are your memories of the 2012 NBA Finals?

When we went as a team in 2012, I just felt like it was our time. We wanted that moment. We deserved that moment. It was just a special, special time.

What did you think about the criticism you have received on social media and from the sports media after deciding to depart the Thunder to rival power Golden State?

I was more so confused. You can say whatever you want about my decision or who you think I am. The only thing that matters is in between the lines. I respect the game. I work hard. I came in and respect my teammates. I respect just the competitiveness of the game of basketball. That’s in between the lines. I try to play the right way and handle myself the right way. I am just confused as to why that stuff doesn’t matter more than what happens on Twitter or whatever the topic of discussion is each day. I think it takes away from what is most important: that ball and that basket, everything in between the lines.

I don’t expect anyone who has never been there before to understand that. They have nothing else to talk about because they don’t really know what it is or what it feels like to be on the court in an NBA game. I don’t hold it against them. That’s why I am not mad.

I’m just more so confused that you can be an analyst or an expert, and I want to talk to the people who disrespect what goes on in between the lines. I respect a lot of people in [the media] business who really appreciate how hard it is to get to this point. So, I’m more so confused that [select media] doesn’t talk about the game of basketball more so than narratives and gossip around basketball. That’s what I’m more confused about.

Do you think your right to make a decision as an unrestricted free agent in 2016 should have been respected more?

They don’t have to respect anything. As long as you respect the game of basketball, that’s the most important thing to me. Not just with me — overall, it’s the last thing people worry about. Obviously, you look at who wins and who loses, who scores the most points, but you don’t really dive deep into the game of basketball. You don’t take the time to do it. That’s where my frustration is.

This game is pure. It’s amazing. We are taking it all away because of all the nonsense, narratives, topics and what these players are thinking. We spend more time worrying about what this guy is thinking in this situation more so than how he approaches the game of basketball.

After a five-year layoff, how much respect do you have about the challenge of returning to the Finals, assuming the Warriors get there?

I respect how hard it is. It’s tough. Stuff has to fall your way. You have to be a little bit lucky to get back to this point. This is where we are at this point in all of our lives. We want to get back to being one of the last two teams playing at the end of the [season].

That’s exciting. But we’ve got one more game to finish off, and hopefully we can get this thing done and get as much rest as possible before we start to play, tune up our game plan. But the main focus is trying to finish this off [Monday].

What is the best thing about playing for the Warriors?

It’s just basketball. You have people here who realize that the most important thing is it’s a game. You have fun. But you also should be passionate and dedicated. That is what everybody’s vision is. We know how important it is to everybody else. It’s not that serious.

There is a fine line between being passionate, taking it serious and being too serious. We kind of tiptoe that line a little bit more so on the not-so-serious side. I think that’s what makes it fun and makes you have a good time.