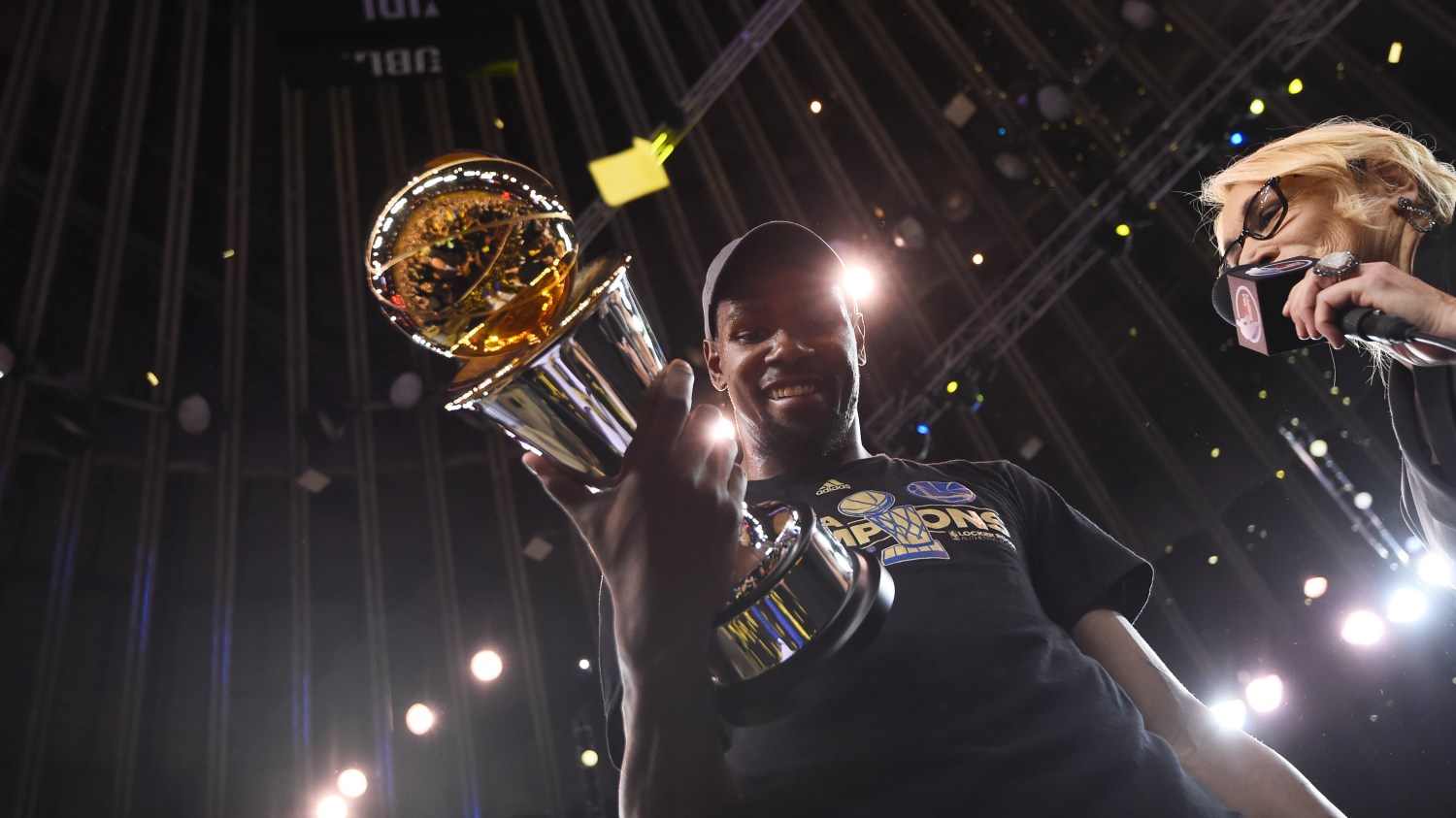 OAKLAND, CA – JUNE 12: NBA Finals MVP Kevin Durant #35 of the Golden State Warriors after winning the NBA Championship in Game Five against the Cleveland Cavaliers of the 2017 NBA Finals on June 12, 2017 at Oracle Arena in Oakland, California. NOTE TO USER: User expressly acknowledges and agrees that, by downloading and or using this photograph, user is consenting to the terms and conditions of Getty Images License Agreement. Mandatory Copyright Notice: Copyright 2017 NBAE (Photo by: Noah Graham/NBAE via Getty Images)

OAKLAND, California — A brightly smiling and seemingly at peace Wanda Durant stood behind the door of the Golden State Warriors’ locker room as media passed her by in droves to get a glimpse of the 2017 NBA champions’ champagne-induced party. She also looked as if she was frozen in time with no interest in leaving her son’s most beautiful and unforgettable moment on Monday night.

“I’m happy for him. I’m kind of overwhelmed for him,” Wanda Durant told The Undefeated. “It’s something he has been working at since he was 10 years old. No matter what happened, no matter how good it was or how bad it was, he never stopped working hard. Tonight was evident of that. It showed.

“This is just part of the beginning of his legacy. That’s what this is.”

Kevin Durant was an NBA champion for the first time in his career after leading the Warriors past LeBron James and the Cleveland Cavaliers during a series-deciding 129-120 victory in Game 5 at Oracle Arena. The 2017 NBA Finals MVP received a lot of criticism for his decision to depart from the Oklahoma City Thunder to a “Super Team” with Stephen Curry, Draymond Green, Klay Thompson and Andre Iguodala. There were media members who accused Durant of chasing a title and took further exception to his decision. And then there was the bad blood between Durant and his former Thunder teammate Russell Westbrook that also became a big story this season.

While wearing a 2017 NBA championship hat and T-shirt and holding his Finals MVP trophy with the pride of holding a newborn baby, Durant thanked his teammates. He also made a point to thank his family and close friends who got him through this roller-coaster season that concluded with winning the ultimate prize, an elusive NBA championship.

“Encouragement every single day,” said Durant, who had 39 points, 7 rebounds and 5 assists in Game 5. “Just the belief that I can do whatever I want in life — not just basketball, everything. So I carried that all season, especially when I made the decision. And you hear so much chatter about what I should do. To have [CEO of The Durant Company] Rich [Kleiman], [security guard] Tom [Aube], my brother, my mom, my dad, all my friends just continue to just pour into me, just pour into me every single day, people that you probably won’t even meet in your life, pour it in me …

“I just tried to continue to keep grinding and let them know that it doesn’t go in vain. I’m just working, and I believe. And just every day, man, I’m just grinding and believing in myself that I can make this happen. And to do it feels great.”

One of the first people Durant hugged after winning the championship was his now-famous mother to the left of a quickly laid down championship stage. In 2014, Durant called his mother “The Real MVP” during a ceremony after he won the NBA MVP award, and she has been a media darling ever since. She said she and her son took all the criticism of him “with a grain of salt.”

“There were some hurtful things that were said,” Wanda Durant told The Undefeated. “He understood that it was a part of the decision that was made. I felt like some of the comments were totally unnecessary and unwarranted. It is what it is. I was settled because he made a decision that he wanted to make.

Durant decided to go to the Warriors after a meeting in the Hamptons. The meeting included the likes of Curry, Green, Thompson and Iguodala just weeks after the franchise lost in the 2016 NBA Finals to the Cavs after blowing a 3-1 lead. Durant’s father, Wayne Pratt, told Curry after the trophy ceremony that he played a big role in persuading Durant to go to Golden State.

Pratt, Kleiman and close friend Charlie Bell were with Durant during every meeting with NBA suitors last summer. Pratt has said that on the morning of July 4, his son woke him, Kleiman and Bell to let them know he was going to the Warriors. Pratt said skepticism was expected about his son, but he never wavered about his decision to go to the Warriors despite knowing “everybody is not going to be happy.”

“What I remember was that he was confident in his decision, and it was all about him,” Pratt told The Undefeated. “It wasn’t based on nobody else but himself and where he wanted to be. And that’s the most important at the age he was at, 27. To make that decision, that’s a step into being a man.

“It was his decision, and it wasn’t based on nobody else. He was ready to stand on that regardless. He put all these chips in one basket. That’s what I preach about that.”

Pratt said the toughest time this season for his son was when he missed 19 games with a Grade 2 MCL sprain in his left knee and a tibial bone bruise. Durant initially feared that the injury suffered on the road against his hometown Washington Wizards was season-ending.

“When he got hurt, it was hard,” Pratt said. “You heard people say that’s what he gets, and all that. When we realized that it wasn’t a season-ending injury, we knew that he was going to come back strong.

“The proudest day was the first day I saw [Durant] when he was born. That’s how proud I am right now.”

Durant made a point to ask his dad to come on stage to celebrate the Warriors’ championship with him. He even gave Pratt his trophy to hold as well.

“It meant everything,” Pratt told The Undefeated. “Everything that we always talked about from the time we started to do this until now, it’s amazing. It’s amazing to watch this.

Kleiman, who is also CEO of Thirty Five Media, said he has “never been prouder of somebody in his life.” Kleiman left his position at the Jay Z-founded Roc Nation as a vice president and agent so he could work solely with Durant.

“He’s so strong-willed. He’s so content with everything in his life, and it showed on the court,” Kleiman told The Undefeated. “I’ve never seen him play with so much ease and relaxation. Nobody deserves it more than this guy.

“He just kept his eye on the prize all year. He worked hard. He stayed focused and has been locked in from the second he moved here. You can see it in everything he’s done in his life. It’s an incredible moment. Nobody deserves it more than him.”

Bell said another reason that Durant was able to handle pressure well this season is that he grew up in a tough environment in Seat Pleasant, Maryland. In 2005, Durant’s youth basketball coach, Charles Craig, died at age 35 in a parking lot after suffering multiple gunshot wounds in the upper body. Durant wears No. 35, which is retired at the University of Texas, to honor Craig for the years he had on earth.

“They are going to hate regardless, so give them something to talk about. Make history,” Bell told The Undefeated. “Where we grew up and came from, this isn’t pressure. This is just basketball. We went through real-life situations. This is all fun. This is icing on the cake.

“Seat Pleasant, Maryland, is tough. A lot of close friends of ours and mentors passed away. We went through a lot. This is basketball. There is no pressure to play basketball.”

Durant met Randy M. Williams during his freshman year at the University of Texas in 2006-07, and they have been friends ever since. Williams took satisfaction in seeing Durant go from losing the 2012 NBA Finals in five games to James and the Miami Heat to beating James and the Cavaliers in five games this year. Williams also respected how Durant lived up to the pressure.

“For him to leave Oklahoma City with all the pressure and all the scrutiny, just to see him up there happy and to win, that’s what it’s about,” Williams told The Undefeated. “He just wanted to win, play good basketball and just be a winner. Hat’s off, dude. It’s amazing. A major run.

Nike pro basketball marketing representative Charles Terrell takes care of Durant’s shoe account and is one of his closest friends. Per usual for Nike pro basketball reps, Terrell didn’t want to be quoted. But Durant showed him his appreciation by letting the former University of Pacific guard hold his Finals MVP trophy.

“Hey, Chuck, we got one. We got one, man,” Durant exclaimed to Terrell.

Another important person behind the scenes of everything Durant does with a watchful and protective eye is his security guru, Aube. Remember the guy who saved Durant from a loud overhead air conditioner in Cleveland?

Aube just wants to do his job and never wants to be quoted despite having a quick-witted sense of humor and predicting to friends before the playoffs began that Golden State could go undefeated in the postseason. But in typical Aube fashion, as Durant was wrapping up interviews on the floor, he hand-delivered a beautiful wooden box filled with championship cigars for “boss man” to pass out to celebrate his first championship.