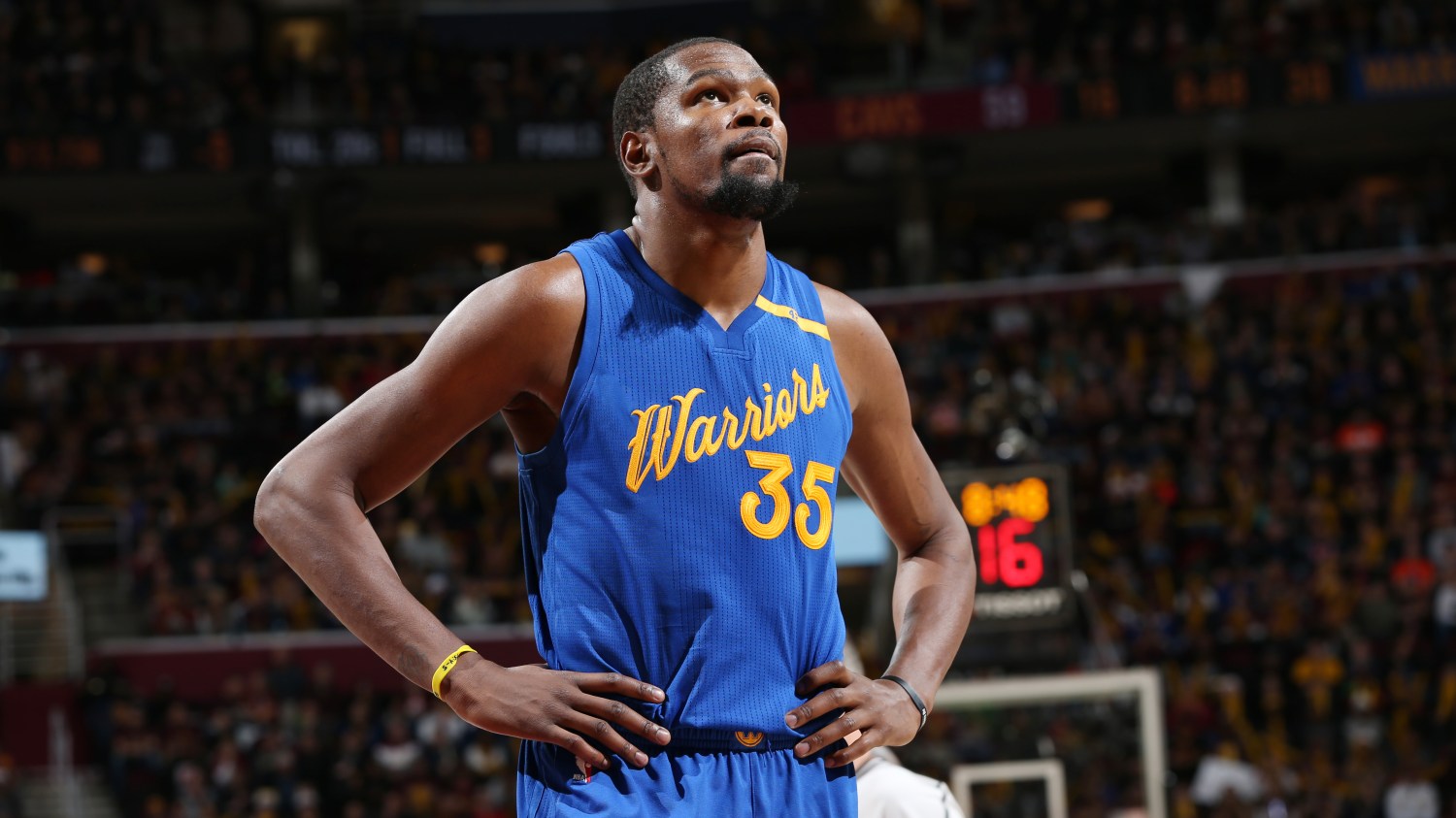 CLEVELAND, OH – DECEMBER 25: Kevin Durant #35 of the Golden State Warriors reacts to a play against the Cleveland Cavaliers during the game on December 25, 2016 at Quicken Loans Arena in Cleveland, Ohio. David Sherman/NBAE via Getty Images
NBA

Kevin Durant sat on the Quicken Loans Arena floor in frustrated amazement while Richard Jefferson ran down the court with one fist in the air as the buzzer sounded, closing the latest chapter of the NBA’s best rivalry.

With the Golden State Warriors down one point to LeBron James and the Cleveland Cavaliers on Sunday, Durant got the ball for a possible game-winning shot in the final seconds. Shortly afterward, however, Jefferson inadvertently pushed and tripped Durant. But the referees in Cleveland swallowed their whistles. While seated on the floor, Durant threw up a wild, Hail Mary 3-pointer at the buzzer that didn’t come close to falling in the Warriors’ 109-108 loss in Cleveland.

“I would’ve made that shot if he didn’t trip me up,” Durant told The Undefeated. “But they ain’t calling it on him at their crib. It’s not his fault. It’s not the refs fault, either.”

It’s not like he hasn’t played against James before, or in big, emotional games, either.

Durant and the Oklahoma City Thunder lost to James and the Miami Heat in the 2012 NBA Finals. The former OKC star has also played in some big showdowns in recent years against the Warriors, San Antonio Spurs and Los Angeles Clippers in the postseason. He also led the United States to a gold medal at the 2016 Rio Olympics before joining the Warriors this season.

Durant walked into perhaps the best rivalry in sports with two big chapters already in the books. Stephen Curry, Klay Thompson, Andre Iguodala, Draymond Green and the rest of the Warriors beat the battered Cavaliers for the NBA title in 2015. Then James, Kyrie Irving and the Cavaliers historically overcame a 3-1 series deficit to beat the Warriors in the 2016 NBA Finals. And that’s just the Cliffs Notes version, as it’s safe say that both squads don’t like each other much.

Durant was certainly aware of all the hype the rivalry presented, and tried his best not to join the emotion of it all in his debut.

“I was lost in the game,” said Durant, who scored a game-high 36 points and made all 12 of his free throw attempts. “I wasn’t paying attention to all that stuff. I was hooping. It was a competitive game. Both teams came with it. That’s what you want on Christmas. It was a great game. But all of the extra stuff, at the end of the day, you’re going to be who you are.

“I went out there and did what I was supposed to do as far as preparing for the game, not getting distracted by all that extra stuff. We should have won the game. I felt like we should’ve won. But we lost, we have to move on, grow from it and get better. Once you get between the lines, all the hype goes out the window. You just got to hoop.”

His cool pep talk calmed down an irate Green by the Warriors’ bench after he was slapped with his second foul and a technical with 9:25 left in the first quarter. Green has said that Durant adds a strong dynamic on both ends of the court that should aid the Warriors against the Cavaliers. During the first half, the offensive dynamic stood out. Durant seemed sparked by Green’s emotion as he torched the Cavaliers in the first half with 17 points on 5-of-8 shooting from the field, eight rebounds, one steal and one block in nearly 19 minutes.

“I just tried to be me. Be aggressive, miss or make,” he said.

Durant looked like he was the best player on the floor in a game loaded with NBA superstars. He scored 11 points in the third quarter and earned two three-point plays early in the fourth to push the Warriors ahead 95-82 with 9:20 remaining.

“KD came out in that fourth quarter and was very aggressive,” said James, who had 31 points and 13 rebounds.

Warriors coach Steve Kerr put Durant on the bench for a breather with the Warriors ahead, 95-87, with 7:33 remaining in the game. While Durant was sitting, he watched the Cavaliers go on a 7-2 run with the aid of two Warriors turnovers to trim the visiting team’s lead to 97-94 after an Irving 3-pointer with 6:12 remaining. Cleveland ended up scoring 21 points off 20 Warriors turnovers in the contest.

“We had too many turnovers, that’s the thing,” Durant said. “That’s two games in a row. We have to control that.”

Durant returned to the game 26 seconds later hoping to give the Warriors a great Christmas story in the city where the 1983 movie A Christmas Story was filmed.

The Warriors actually had a 108-105 lead after a frigid Curry finally nailed a key 3-pointer with 1:14 left. But par for the game, the Warriors followed with two-straight turnovers that led to an Irving layup and 13-foot turnaround jumper to push the Cavaliers up 109-108 with 3.4 seconds left. What would be a game-winning shot for Irving was reminiscent of the jumper that sealed the Cavaliers’ championship in Game 7 of the 2016 NBA Finals. To make matters worse for Golden State, Cleveland overcame a 14-point fourth-quarter deficit on the holiday matchup to retake the lead.

“Taking the turnaround shot, it’s a tough shot,” said Irving, who had 25 points 10 assists, seven steals and six rebounds. “They got great contest on it. Just thankfully, it went in.”

“Kyrie hit shots, fallaways and stepbacks, and a tough shot at the end of the game,” Durant said.

The Warriors had one last chance with 3.4 seconds left to win the game.

With Curry cold and Durant with a game-high 36 points in hand, Kerr drew up a play for the newcomer to take the final shot. Instead of James guarding Durant, Jefferson — who had received a technical earlier for winking at Durant after dunking on him — was guarding him. After the ball was inbounded to Durant, he appeared to be tripped by a physical Jefferson, lost his balance, fell to the ground and couldn’t get a shot off, making his big offensive night an afterthought.

It will be interesting to see what the NBA’s Last Two Minute Report says on that Durant play, though it won’t change anything. Green told Durant he was definitely tripped after they looked at a replay on Durant’s phone in the locker room after the game.

“I was trying to make a move, and I fell. I didn’t fall on my own,” Durant said.

It was just the Warriors’ fifth loss of the season, but this one stung more since it was against the Cavaliers.

Cleveland has now beaten the Warriors in four-straight emotional and contested games, dating back to the 2016 NBA Finals. Irving and James hooted and hollered in appreciation as they entered the victorious home locker room after their Christmas win. The Warriors host the Cavaliers in the final regular-season meeting between the two teams on Martin Luther King Jr. Day on Jan. 16, 2017.

Durant will likely have to go through James, Irving and the Cavaliers if he hopes to get his first NBA championship, but admitted that his first Warriors-Cavs experience was actually pretty cool.

“It’s amazing. Every time you get to play in this atmosphere, it’s incredible. I’m looking forward to the next one,” Durant said. “It’s fun. I wish that we could keep playing.”