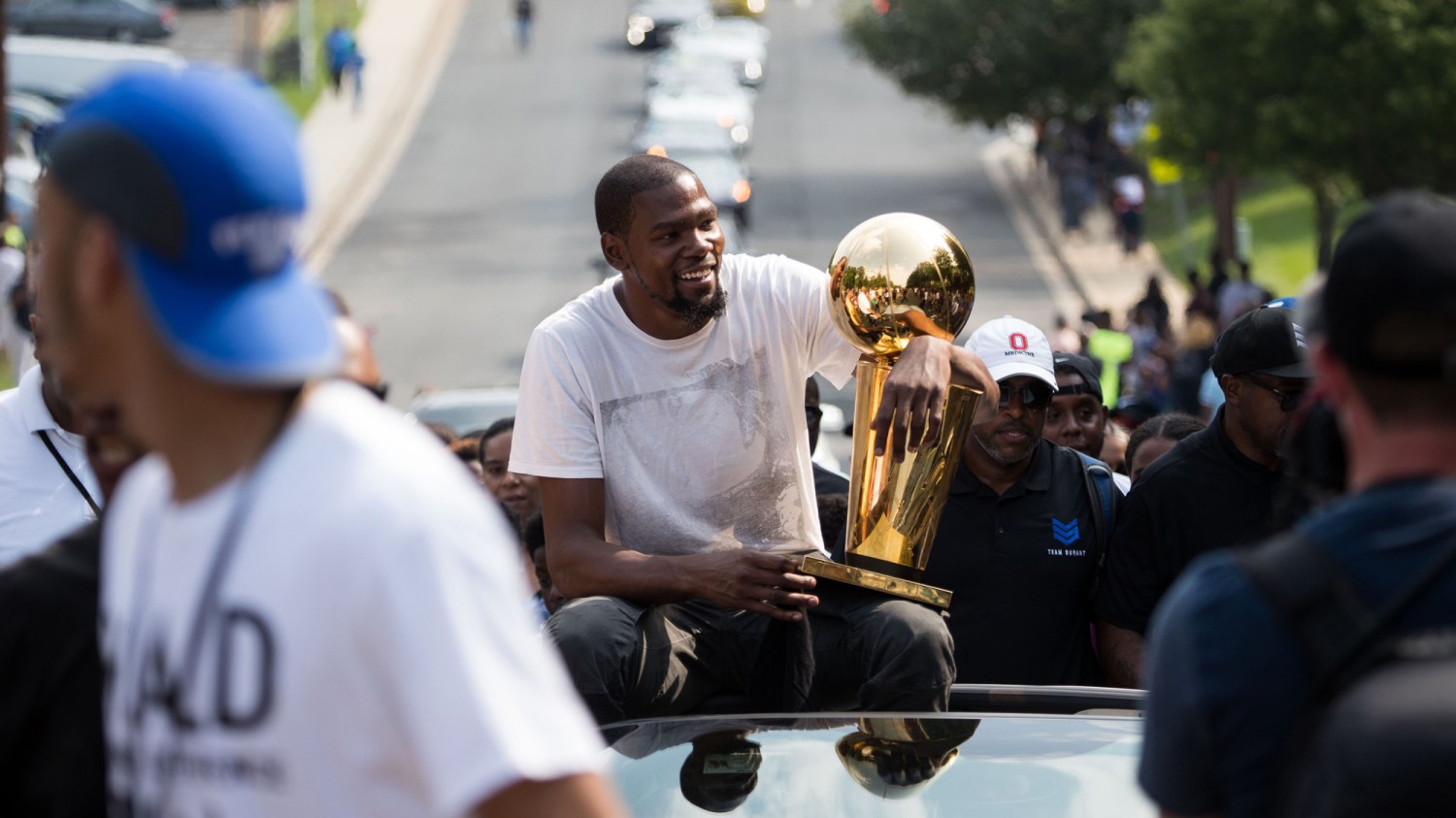 Kevin Durant of the Golden State Warriors holds the NBA Larry O’Brien Championship Trophy as he rides on a Chevrolet Corvette during the Kevin Durant Day celebrations parade in Capitol Heights, MD on Aug 17, 2017. Ting Shen for The Undefeated
Kevin Durant

Kevin Durant soaks up the love from his hometown

‘Thank you so much. I owe you guys way more than you owe me.’

“I appreciate all of the love and support. It’s amazing,” the NBA champion and NBA Finals MVP said. “We leaned on each other in this building [SPAC]. We raised some pretty amazing kids here, so thank you so much. I owe you guys way more than you owe me.”

Durant then made his way out the back door to a black, extended cab van. Before taking his seat on the left-hand side of the vehicle, Durant moved through the crowd signing autographs, dapping people up and hugging people from his Seat Pleasant neighborhood.

In the front of the crowd there was a group of little boys yelling, “KD, KD, KD,” handing him books, T-shirts and jerseys. Little kids who couldn’t reach the front begged their mothers, fathers and older siblings to find a way to reach Durant so they could go home with signed paraphernalia as well. Even when Durant disappeared into the van, his mother, Wanda Durant, entered it continuing to hand him material to sign until the van and motorcade finally took off.

Earlier in the day, Durant, his friends and family rode in a parade around his native Seat Pleasant as the city celebrated Durant’s first NBA championship and all of his charity to the Prince George’s County city. Durant sat in the back of a Chevrolet Corvette and rode from Hill Road to Seat Pleasant Drive to Addison Road. He took a short break just past Greendale Recreation Center on Crown Street.

After stopping to sign autographs on Crown Street, Durant headed to the SPAC, where he received the Governor’s Citation from Lt. Gov. Boyd Rutherford. Prince George’s County Executive Rushern L. Baker III presented both Kevin and Wanda with recognition for their contributions to the city, county and state.

On May 15, Durant donated two new basketball courts to Seat Pleasant Elementary School and the SPAC, with his mother cutting the ribbon on his behalf. Wanda said the goal was for Kevin to not only reach the NBA Finals but to win the championship.

She didn’t predict an NBA Finals MVP trophy, but when the clock struck 0:00 and Kevin, who averaged 35.2 points, 8.4 rebounds and 5.4 assists per game in the Finals, was named Finals MVP, Wanda famously told her son that “no matter what nobody say, you did it.”

Reflecting on that postgame interview with ESPN’s Doris Burke, Wanda said she wanted to make sure Kevin understood no one could take the achievement away from him.

“After everything you have gone through, not just the rhetoric from last season, but from the beginning, you did it,” she said. “I want you to be proud of that as a man, because that creates fortitude and posture within yourself. I wanted him to enjoy the moment, because as they won each game, he would always say, ‘We gotta get to the next game,’ and I would always say, ‘No, celebrate this moment right now, because it’s going to be over soon.’ I wanted him to be in the mode to celebrate on that particular night too.”

The All-Star forward spoke to ESPN’s Chris Haynes on Thursday about why he won’t visit a White House occupied by President Donald Trump if the Warriors are invited, and he was introspective about the violence in Charlottesville, Virginia, during a white supremacist rally over the weekend.

The Warriors have not received a formal invitation to the White House. Golden State will be in Washington, D.C., on Feb. 28 to face off against the Wizards.

“Nah, I won’t do that,” Durant told Haynes in an exclusive interview. “I don’t respect who’s in office right now.

“I don’t agree with what he agrees with, so my voice is going to be heard by not doing that. That’s just me personally, but if I know my guys well enough, they’ll all agree with me.

“I just wanted to sit back and analyze everything and gather my thoughts. I wanted to say something immediately, but I definitely want to be the voice of where I come from and people who have come from my neighborhood and deal with oppression.

“I’m representing a lot of people. As far as what’s going on in our country, for one, as an athlete, you have to commend Colin Kaepernick, LeBron James, Carmelo Anthony, CP3 [Chris Paul] [and] Dwyane Wade for starting that conversation last year. Russell Westbrook also said something in his speech. A lot [of] guys with platforms have drove the conversation in a good direction. And what’s going on in Charlottesville, that was unfathomable.”

Durant using his platform to speak about social issues is a part of the character that his father, Wayne Pratt, and Team Durant coaches Brian Bobo and Osman Bangura spoke about during the Kevin Durant Day events.

Durant’s AAU teams filled the arena as he spoke to the hundreds of people who filled the SPAC gym that is adorned with numerous items bearing his name. The way in which Durant has inspired youth made it easy for Pratt, Bobo and Bangor to join, coach and support his AAU initiative.

Pratt, asked about an occasion off the court when he has been proud of his son, recalled a day in Oklahoma City when the pair went to an Apple store to buy a laptop. A young boy was in the store blasting music with inappropriate lyrics, and Kevin walked over to him and explained there is a time and place for that, but not in a store where there are families, people’s moms and young kids.

Kevin didn’t lecture the boy, his father said, but used the conversation as a teachable moment, and sure enough, the kid stopped playing the music. Pratt said what made that moment resonate so much with him is because it was something he would’ve done himself, so the things he had taught Durant growing up stuck with him.

“This organization is really focusing on the academics side and making sure our kids are actually balancing out the education as well as the academics,” he said. “That’s very important in the overall arching theme of what Kevin has actually felt like his entire life has been built upon.

“The ultimate goal is to make sure that our kids are actually getting an opportunity to use this game in a way in which it inspires them, it pushes them, it motivates them to be better individuals. Not just within their own homes and amongst their own families but within the community. … If at one point in time, we get a chance to lay our hand on a kid in the organization to just get them inspired enough to do just a little bit more, then we’ve done our job.”