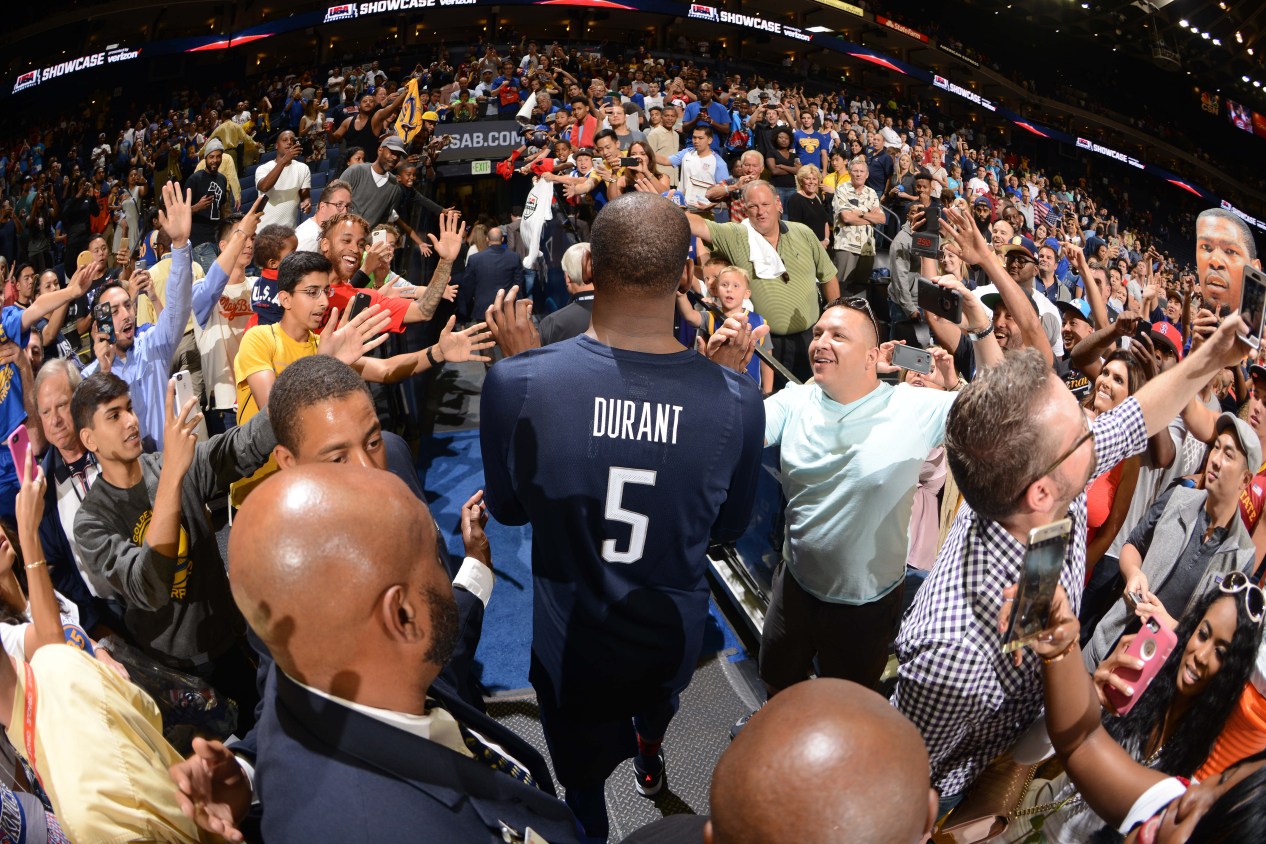 OAKLAND, CA – JULY 26: Kevin Durant #5 of the USA Basketball Men’s National Team shakes hands with fans after the game against China on July 26, 2016 at ORACLE Arena in Oakland, California.

Now that Kevin Durant is officially theirs, the Warriors are preparing for what’s next

Golden State Warriors guard Stephen Curry returned to Oracle Arena on Tuesday night for the first time since losing in Game 7 of the 2016 NBA Finals. LeBron James and the NBA champion Cleveland Cavaliers, however, weren’t on the two-time NBA MVP’s mind as he strolled to his courtside seat. While enjoying a beverage and french fries, a relaxed and tanned Curry was focused on his new Warriors teammate, Kevin Durant, playing in his new home.

“It’s a cool experience to kind of get acclimated to the new environment,” Curry told The Undefeated about Durant. “I know it’s for Team USA, but I’m sure the fans love seeing him come in and play in front of the new home crowd.”

Durant made his Oracle Arena debut as a member of the Warriors while playing for USA Basketball in a 107-57 blowout over China in an Olympic tune-up. Back on July 4, the seven-time NBA All-Star made the stunning announcement that he was departing the Oklahoma City Thunder to join a Warriors team the Thunder blew a 3-1 series lead in the Western Conference finals against. His mild-mannered, nice-guy reputation was instantly lost to one of a villain once he joined a Golden State team with three other NBA All-Stars. The 2014 NBA MVP, who has a new Tupac leg tattoo, was even booed while playing for USA Basketball against China in Los Angeles last Sunday.

But there was no booing expected on this night in Oakland, California. And knowing that an adoring new fan base was awaiting him, Durant arrived nervous like it was a marquee NBA regular-season matchup.

“He was excited,” Durant’s personal manager Charlie Bell told The Undefeated. “He couldn’t wait to play in front of these fans to see what the outcome would be. They showed him a lot of love. That was good.”

Durant’s newfound fans wore his No. 35 Warriors jersey and T-shirt as they waited outside the arena in long lines well before the doors opened. Young Warriors fans yelled, “KD!” down to him as he spent about five minutes signing autographs in a tunnel where Curry is known for making pregame practice bombs.

“He got booed in L.A. That was upsetting to him. But very quickly, in 48 hours, he went to being cheered just as loudly or more,” USA Basketball executive director Jerry Colangelo told The Undefeated before the exhibition game.

Warriors and USA Basketball forward Draymond Green said Durant was “definitely excited” in his new home locker room before the game. The predominantly pro-Warriors crowd gave Durant a lengthy cheer as a welcome during pregame warm-ups. Green and Warriors forward Klay Thompson got grand, and perhaps even louder, cheers.

After the national anthem, Durant, Green and Thompson stood in the middle of the Oracle Arena floor to greet the crowd. Green took the mic and gave Durant a shout-out during his brief speech.

“[Durant] kept saying, ‘Man, I got jitters. First-game jitters.’ But it was great to see,” Green said.

‘Strength in Numbers’ convinced Kevin Durant to join the Warriors

Durant’s jitters went away before he could break a sweat as he nailed the game’s first points on a 3-pointer and followed shortly afterward with a dunk. He ended up scoring 10 of his 13 points in the first quarter to the delight of Warriors fans. It was just a practice game, but Green said Durant’s debut will always be remembered due to the remarkable circumstances.

“There’s a continuation and momentum that has been building the last two years,” Welts told The Undefeated. “No one could imagine a scenario where it can raise the level. But I think it has. From a business standpoint, the tickets are sold. The waiting list is over 32,000.

“There is a sense of excitement about the team. The other stuff is just noise. When cut right through it across the league, there is such anticipation for how it’s going to play out. That’s why we are involved in this, right? For what goes on, on the court.”

Since Durant signed, the Warriors organization has not had a chance to get to know its extremely busy new star that well.

Durant went to China for a Nike promotional tour shortly after signing with the team. Upon his return, he began training for the 2016 Rio Olympics with USA Basketball. Durant and the USA Basketball team will depart to Brazil after a final exhibition game next Monday in Houston. The Olympic men’s basketball tournament concludes with the gold medal game on Aug. 21.

With Durant so busy, Welts has only had five minutes with him while he quickly took an office tour on his the day of Durant’s introductory news conference. Warriors general manager Bob Myers and coach Steve Kerr had lunch with Durant in San Francisco on Tuesday in hopes of getting to know each other better. Kerr and Durant talked a little bit about offensive plays, but more time was spent on getting to know each other better.

“Steve and I are sitting with him and we say, ‘I can’t believe you are on our team. But we’re excited,’ ” Myers told The Undefeated.

Meanwhile, Durant’s personal manager Charlie Bell and agent Rich Kleiman are focused on trying to find what will likely be an Oakland-area home for Durant. Durant has been receiving some tips from his teammates about what living in the East Bay Area is like. None currently reside in San Francisco, which offers a tough drive to the downtown Oakland practice facility. Bell and Kleiman have also been sending Durant video of prospective homes. They actually own the trust to pull the trigger on a home they deem perfect while Durant attempts to win a gold medal.

A source said the Warriors told Durant to expect to play in a new arena in San Francisco by 2019. But no plans for putting a shovel in the ground have been formulated for the proposed San Francisco Mission Bay arena with opposition.

“It’s been good, man,” Bell said. “Draymond, Steph, Klay, Bob, everybody has been so helpful giving different directions to live in, different areas to live in. It’s like a family out here already. Everybody is looking out for him.

“We’re making sure that when he comes back from the Olympics, everything is set up for him. It’s a team effort.”

Curry talked to Durant at halftime and after the game, but there has not been much conversation since the signing because Durant has been so busy.

“He went to China and obviously playing in the USA Basketball stuff,” Curry said. “I haven’t talked to him a lot. But I talked to him about where he is going to live. [Kevin and his crew are] staying up in Oakland first until they figure out how they are going to do things.”

The Warriors’ media relations department began traveling with two representatives on the road last year after winning the 2015 title. Durant’s addition will push that number to three public relations guys on the road while a statistical guru is hired to specialize on game notes. The Warriors already have two security guards in director of team security Ralph Walker, who primarily handles Curry, and Terrence West. Durant will bring his own security guy from Oklahoma City in Tom Aube.

So as great as the Durant news is, will the Warriors be able to manage all this stardom off the court?

“I don’t know. We don’t know how to do it yet,” Myers said. “The best thing we have going for us is we’re all good people. I think if you put a bunch of good people together you can overcome whatever it is. But it will be a challenge in ways we don’t know. But I’m confident in whatever it is, we will figure it out.”

Welts said the Warriors’ road trips next season will be on par popularitywise with tours of The Beatles. The former Seattle SuperSonics ball boy added that he has never seen this much anticipation in the NBA for one team in July. Welts said Warriors and NBA fans got a “sneak preview” when they saw Durant play on Tuesday night.

“Being in Las Vegas [for summer league] was interesting,” Welts said. “There are 29 other teams that aren’t thrilled, which, in some ways, feels good. But the anticipation, the expectation, we thought they were high last year. It’s nothing like we’re going to face this year in every aspect of this organization.”