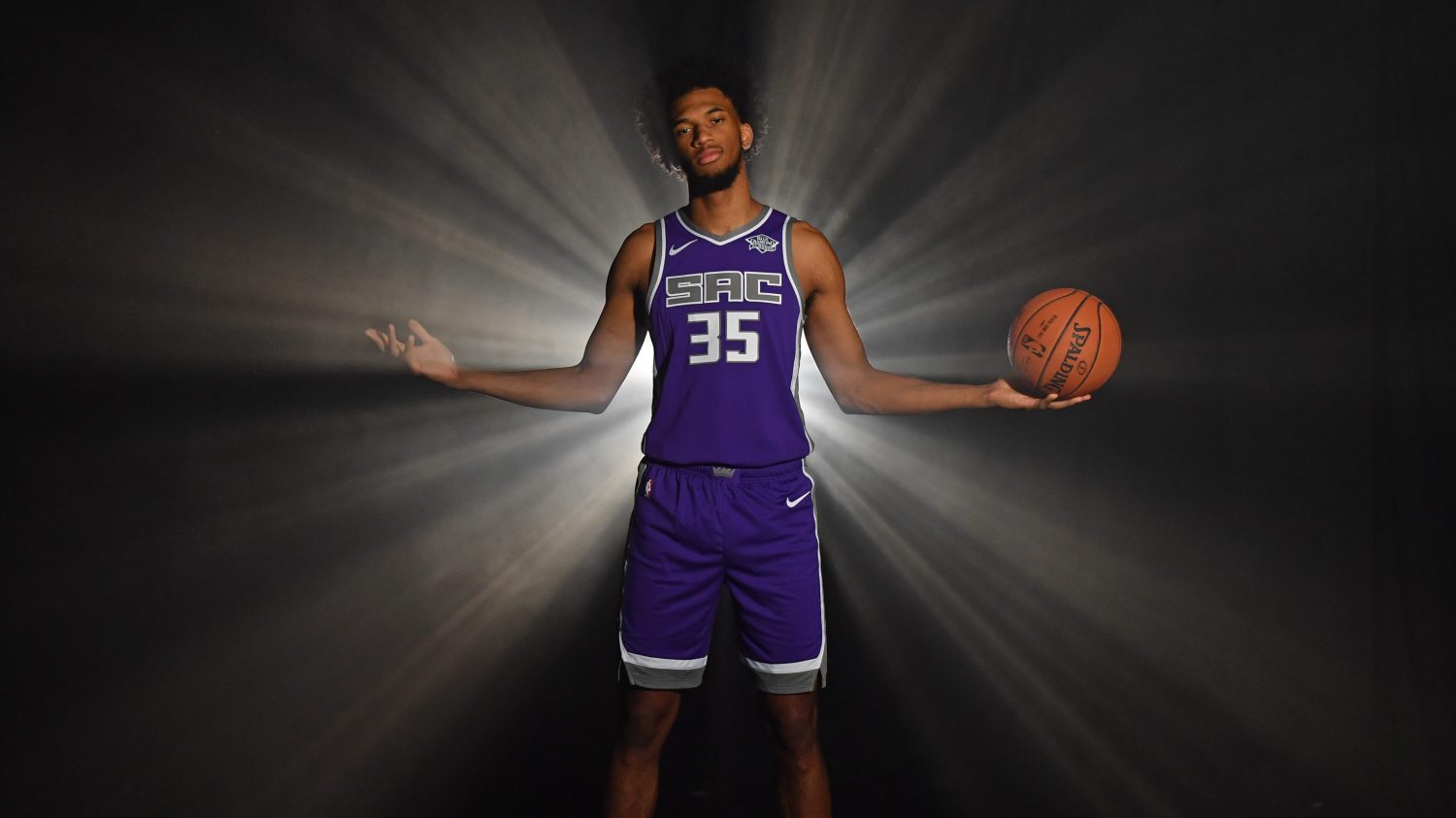 Marvin Bagley III of the Sacramento Kings poses for a portrait during the 2018 NBA Rookie Photo Shoot on Aug. 12 at the Madison Square Garden Training Facility in Tarrytown, New York. Jesse D. Garrabrant/NBAE via Getty Images

The No. 2 pick was studying the likes of Tupac since he was a young baller

SACRAMENTO – Sacramento Kings rookie forward Marvin Bagley walked out in front of the crowd. There was an introduction and a warm welcome. But instead of a basketball in his hand, the No. 2 pick in the 2018 NBA draft was holding a microphone, confidently rapping original music in front of his Kings co-workers.

“My teammates were a little shocked,” Bagley told The Undefeated. “They said, ‘Performance?’ I said, ‘Yeah, bruh, I have been doing this for a long time. I like doing this.’ When they actually saw me doing it and how everyone was responding to it, they were like, ‘OK, he’s serious now.’ ”

It was the first live performance for Bagley, who said he was a little anxious to finally share his music with everyone. But the baller, who wears No. 35 for the Kings and goes by the rap name “MB3FIVE,” wants you to know this is more than just a hobby.

Bagley fell in love with rap about the same time he fell in love with basketball. Born in Tempe, Arizona, he said he began writing lyrics at 5 or 6 years old after being inspired by a rap song on the radio. He also performed in front of family, friends and even strangers.

“I would do Michael Jackson dances and watch his videos,” Bagley said. “Copy everything. I used to [perform] wherever. They used to have a little beat machine and I would play the Michael Jackson song. And I would just start dancing and everyone would be looking. It just went on from there.”

We’ve heard this story before, though, right? NBA player wants to be a rapper.

“My dad told me that Shaq was able to do both. … If he can do that and be successful at both, why can’t I?”

What will set Bagley apart?

“I take it serious,” said Bagley, who respects the skepticism. “You got some people who try to make music just for fun and mess around with it. But I really study music and rappers like Tupac and the rappers before us. I just try to learn as much as I can and get better with my music as well as basketball.”

Bagley was even inspired by O’Neal, who had success rapping with The Notorious B.I.G. and the Fu-Schnickens, and whose discography includes four studio albums, three compilation albums, nine singles and two soundtracks.

“Basketball is what I loved to do over music, obviously,” Bagley said. “I didn’t know how I would be able to do both. My dad told me that Shaq was able to do both. I went on YouTube to listen to Shaq songs and see the music he was doing when he was playing and how successful he was.

“If he can do that and be successful at both, why can’t I?”

Bagley, who was ranked as the No. 1 player in the country in the Class of 2017 by ESPN and showed promise playing against grown men in the Drew League pro-am in the summer of 2017, attended Duke University. It was there where he continued his education in basketball and hip-hop.

At Duke, the 19-year-old was arguably the best college basketball player in the country as a freshman, averaging 21 points and 11.1 rebounds. He also attended a History of Hip-Hop class taught by the likes of Patrick Douthit, who is a Grammy-winning producer better known by the name 9th Wonder. The North Carolina native has worked with rappers such as Jay-Z, Drake, J. Cole, Kendrick Lamar, Wale, Ludacris, Mac Miller, David Banner and Mac Miller.

During his freshman year, Bagley also kept hearing word that rapper J. Cole was working out in a fitness gym that he frequented in the Raleigh-Durham, North Carolina, area. The two eventually bumped into each other.

“I took a picture with him, got his number, and from then on we’ve been texting whenever he has had a chance to,” Bagley said. “That has definitely been helpful for me to kind of learn to build myself and my brand as far as music.”

After a year at Duke, Bagley declared for the NBA draft.

On the day of the draft, Bagley put out a mixtape called, “Don’t Blink,” at 12 a.m. on June 21. It included four songs including “Breathe,” which used the beat from Fabolous’ song of the same name.

“It got pretty good responses,” Bagley said. “It’s been kind of a long process for me holding back on the music. I had the music. I was just waiting on the right time to release it. It was in New York and a perfect time for everyone to hear it.”

“What I love about him is he wants to be great,” said Kings general manager Vlade Divac, who favored Bagley over any draft prospect, sources said, and selected him with the No. 2 pick.

In Bagley’s mixtape, “Thoughts in a Freestyle” begins by thanking God. In “All Americans,” Bagley raps about police brutality and other struggles for African-Americans, with lyrics such as, “Man, I’m just shaking my head/Just because I’m darker doesn’t mean I can’t end up dead.”

Perhaps the best way to describe Bagley’s style is as a positive, conscious rapper.

“I don’t curse in my rap,” Bagley said. “I try to say what I have to say and get my point across without having to use profanity. It shows that you can be more real and organic with what you’re seeing and experience so you don’t have to say the profanity.

“Something might slip, but it ain’t going to be the ‘B-word’ or something where a kid or a mom can’t listen to it. Anyone can listen to what I have coming out. That is what makes me a different artist than everybody.”

Bagley said his top 5 rappers of all time are Tupac Shakur, The Notorious B.I.G., Jay-Z, Nas and Rakim, and he attended a J. Cole concert recently in Sacramento, where they spent time talking primarily about music.

Bagley is expected to drop his first album this fall with his own original music. He won’t reveal who he will be doing collaborations with on the LP and is uncertain how many tracks it will have, but according to a recent Instagram post by Bagley, his album will be called Big Jreams. (Bagley has previously stated that Jream stands for “Jesus Rules Everything Around Me.)

Bagley said he will be rapping about the challenges he had on and off the court en route to making it to the NBA, and added that he has a producer who makes beats for him, but is trying to learn that skill as well and eventually record over it.

He said he has spoken with O’Neal, who is a minority owner with the Kings, about doing a song together in the future.

“I mentioned to Shaq getting on a remix of the song he made [with The Notorious B.I.G.], ‘You Can’t Stop the Rain,’ ” Bagley said. “I was listening to it and I texted him. I was like, ‘We should get on a remix.’ He said it would be cool. Obviously, we haven’t had time to do that. But it would be cool to do and we still might have an opportunity.”

Bagley had seven points and two rebounds off the bench for the Kings in his NBA preseason debut against the Phoenix Suns on Monday. The heralded rookie expects the spotlight to be on him all season with lots of playing time expected on a rebuilding Sacramento team.

“I will be fine,” Bagley said. “I have dealt with the spotlight a long time up to now. The spotlight is on a bigger stage with everybody just watching. But I got to play, have fun, enjoy my teammates and be the best teammate I can be.”

As for Bagley’s budding music career, Divac doesn’t expect it to be a distraction.

“I love when players are exploring themselves,” Divac said. “But I also want them to realize what is a priority in their lives.”

Bagley said the Kings have nothing to worry about.

“Basketball is my passion, but I love both,” he said. “Whenever I do both it brings a positive, happy and peaceful feeling where I don’t think about a lot of things happening and going on around me. It doesn’t give me the same [high] as basketball, but it’s definitely something I love doing.”